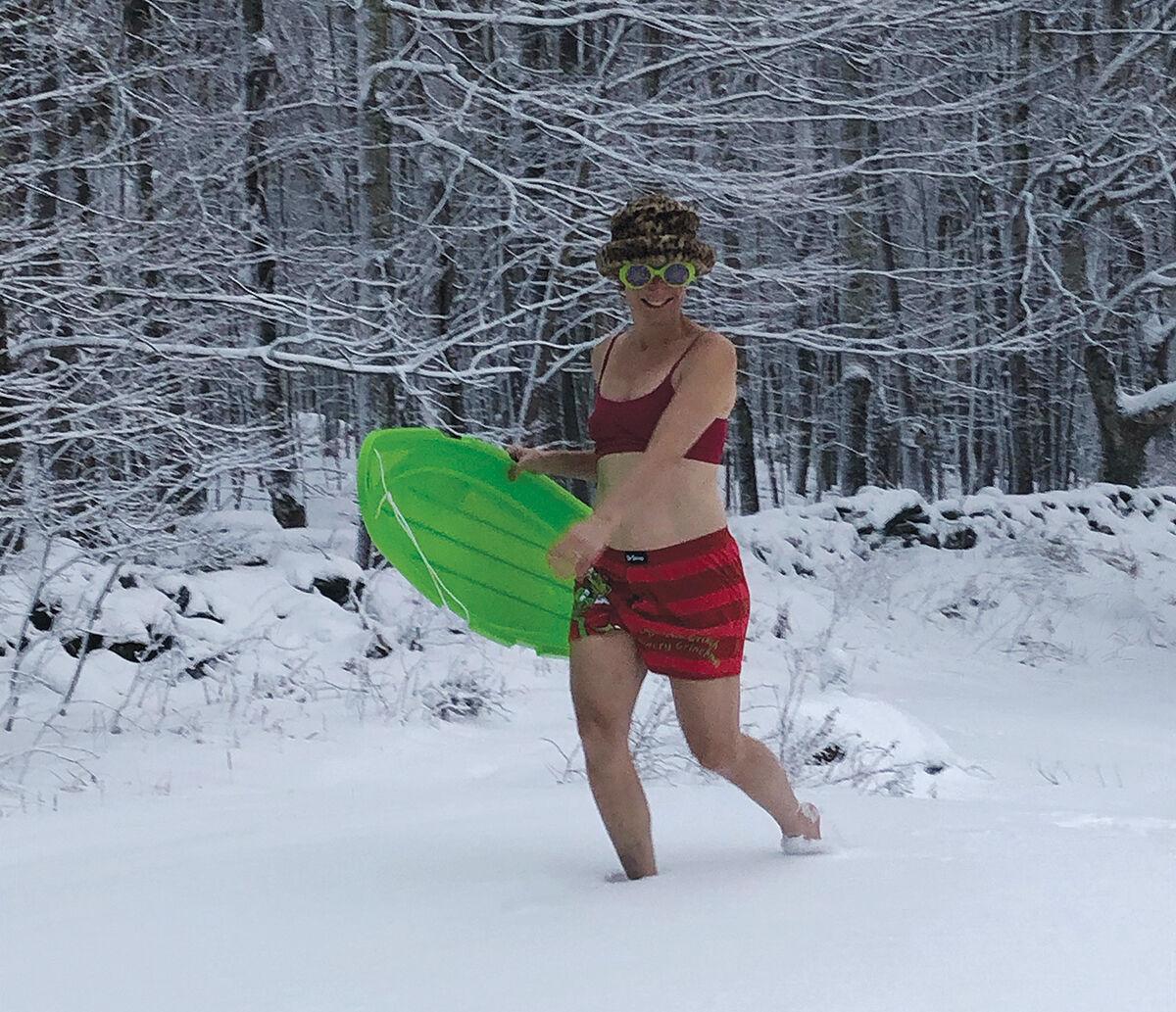 Montpelier native Kelly Young, an employee at Community College of Vermont and supporter of the local United Way, gets ready for a chilly trip on a sled as part of this year’s Polar Non-Splash. 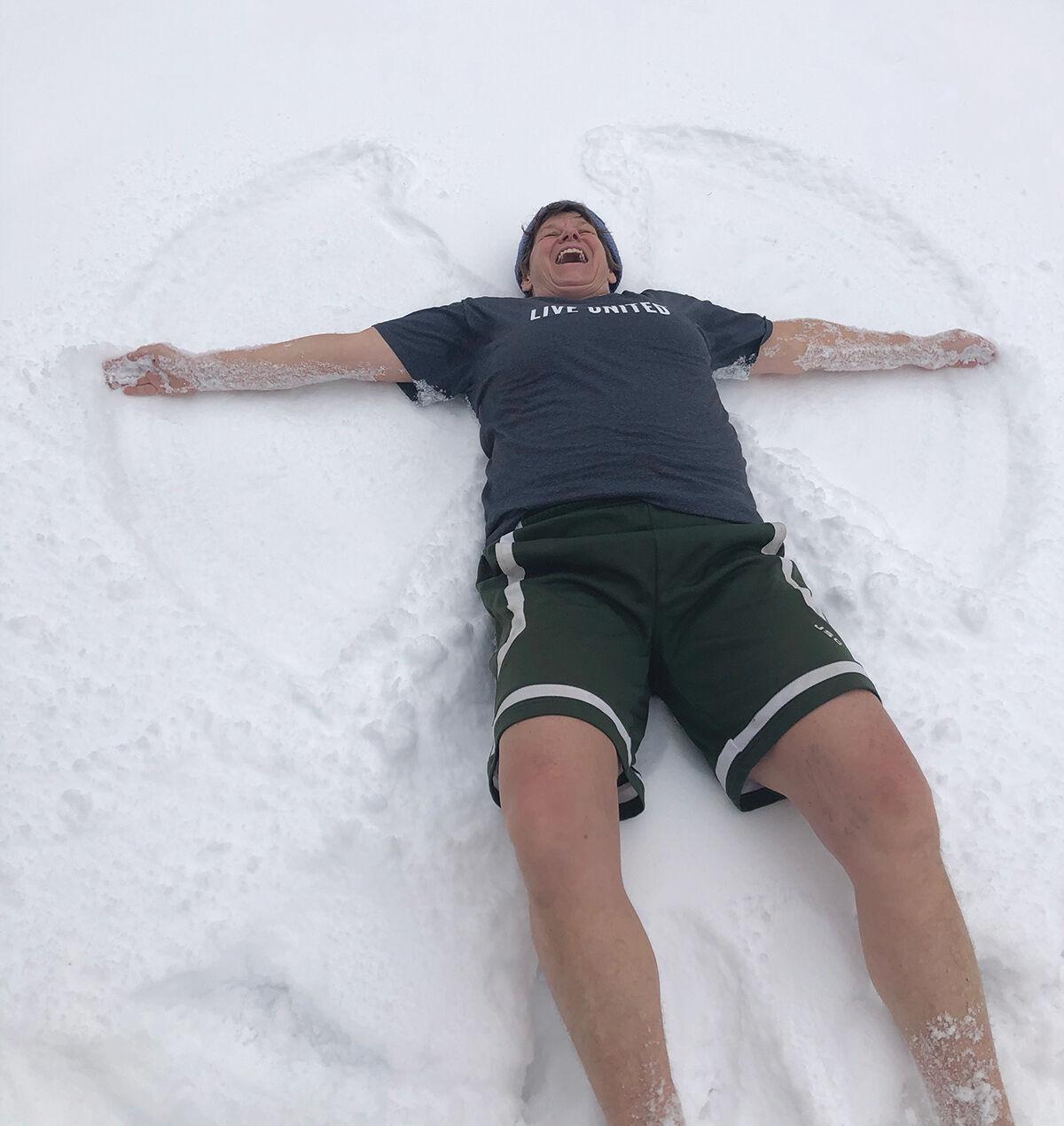 Ellen Hill makes a snow angel as part of Morrisville Rotary’s upcoming Polar Non-Splash event. The club adapted its popular annual Polar Splash at Lake Elmore due to COVID-19. The United Way of Lamoille County, of which Hill is co-director, is a partner in the event and organizers hope to raise $40,000.

Montpelier native Kelly Young, an employee at Community College of Vermont and supporter of the local United Way, gets ready for a chilly trip on a sled as part of this year’s Polar Non-Splash.

Ellen Hill makes a snow angel as part of Morrisville Rotary’s upcoming Polar Non-Splash event. The club adapted its popular annual Polar Splash at Lake Elmore due to COVID-19. The United Way of Lamoille County, of which Hill is co-director, is a partner in the event and organizers hope to raise $40,000.

There won’t be much splashing, but there’ll still be a Polar Splash this year.

So while there won’t be any icy dips into Lake Elmore this February, this year splashers will get to participate in individual or small group, socially distanced cold-weather activities while dressed in apparel more suited to the dog days of August.

Morrisville Rotary, the organization that puts on Lamoille County’s annual Polar Splash, and its partners this year, the United Way of Lamoille County and Salvation Farms, will hold a Polar Non-Splash later this month instead of its more traditional event.

Freezin’ for a reason

“It’ll be different, it has to be virtual,” said Sherry Lussier, the chair of Morrisville Rotary’s Polar Splash committee. So instead of a big group trekking to Elmore to jump in the lake mid-February together, Polar Splashers will participate safely from afar and share their antics virtually.

The premise of the Polar Non-Splash, which has a motto of Shiverin’ to Share, is simple. Each participant makes a donation to the event, and takes videos or photos of themselves doing something chilly in non-winter clothing while also challenging others to do the same.

She kicked off the Polar Non-Splash off last month. The GoFundMe page for the event includes a video of Lussier roasting marshmallows beside a crackling fire. With snow falling around her, Lussier is sitting under an umbrella holding a mixed drink while dressed in summer attire.

As COVID-19 continues to cancel public events, organizers worried that the Polar Splash, which draws a large crowd — splashers congregate in the beach house at Elmore State Park before and after taking brisk dips in the lake — would fall victim to the limits on gatherings and social distancing requirements now in place.

Lussier expects making snow angels and sledding, all while scantily clad, will be popular choices for the Polar Non-Splash, but she and other organizers are encouraging participants to get creative.

“Do something a little bit out there, record it, post it and challenge others to do the same.”

Added Ellen Hill, co-director of the United Way of Lamoille Valley: “Do something a little bit out there, record it, post it and challenge others to do the same.”

“We hope everybody takes the challenge,” Salvation Farms founder Theresa Snow said. “Give what you can, have fun and be safe.”

There is one activity organizers don’t want people doing this year — no jumping into lakes, at least not in Vermont.

In a normal year cold-water divers are already in the hole cut into Lake Elmore to help splashers in and out of the water. With no central organized event those divers won’t be on hand, so Morrisville Rotary and its partners are asking people to find other activities.

“We want it to be safe so we don’t want anyone jumping in any lakes,” Lussier emphasized. Anyone who needs that particular cold-weather activity should wait until next year when the traditional Polar Splash should be back.

This year’s event will run for nearly a month, kicking off Saturday, Feb. 13, and running until Saturday, March 14, to give people time to come up with fun activities and raise money.

The GoFundMe site went live and donations began coming in as soon as Lussier launched the event.

Once renovations are complete, United Way will donate that building to Salvation Farms, which will then use it as the new home of its gleaning operation.

“This program really meets their mission while they help us meet ours,” Snow said about working with United Way. “It’s really pretty beautiful.”

The renovation of the barn was nearing completion when the pandemic shut work down last year. It’s picked back up since, and if all goes well Snow thinks Salvation Farms could be ready to move in by early summer.

Part of the final renovations will include altering the building to best meet Salvation Farms’ needs, Hill said. Additional work will include finishing the bathrooms, putting on exterior siding, painting and running water to the building.

Hill has already performed her first winter activity — a snow angel — as part of the Polar Non-Splash but she’s on the hunt for more to help get more people involved.

Regarding her own activity, Snow said she’s not sure she’s brave enough to do something like sledding in her bathing suit.

“I don’t want to give the surprise away,” she laughed, but she might do a few different activities that could include a snow angel, snowshoeing and snowball fight.

Find the GoFundMe page for the event at uwlamoille.org/shiver.

A historic barn in Morrisville awaits a new purpose. The Morrisville Rotary has made the barn project the 2021 recipient of its annual Polar Splash fundraiser, er, Polar Non-Splash this year.