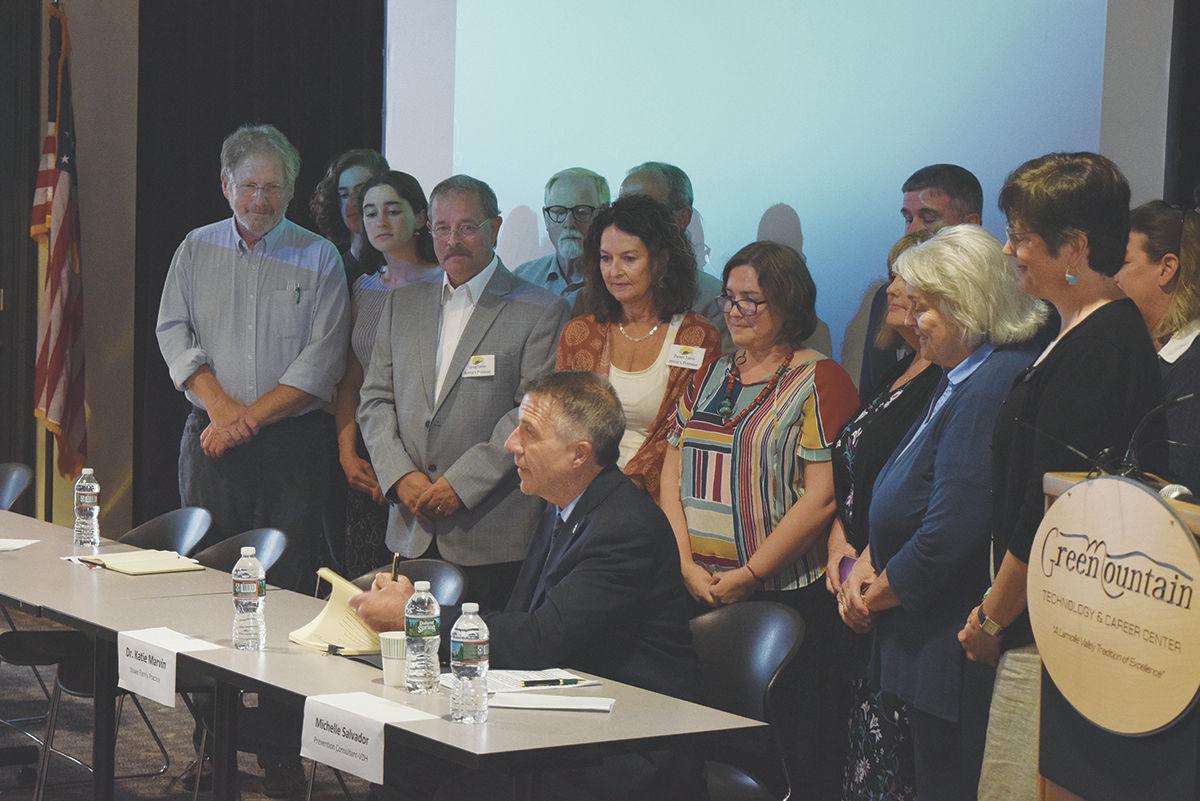 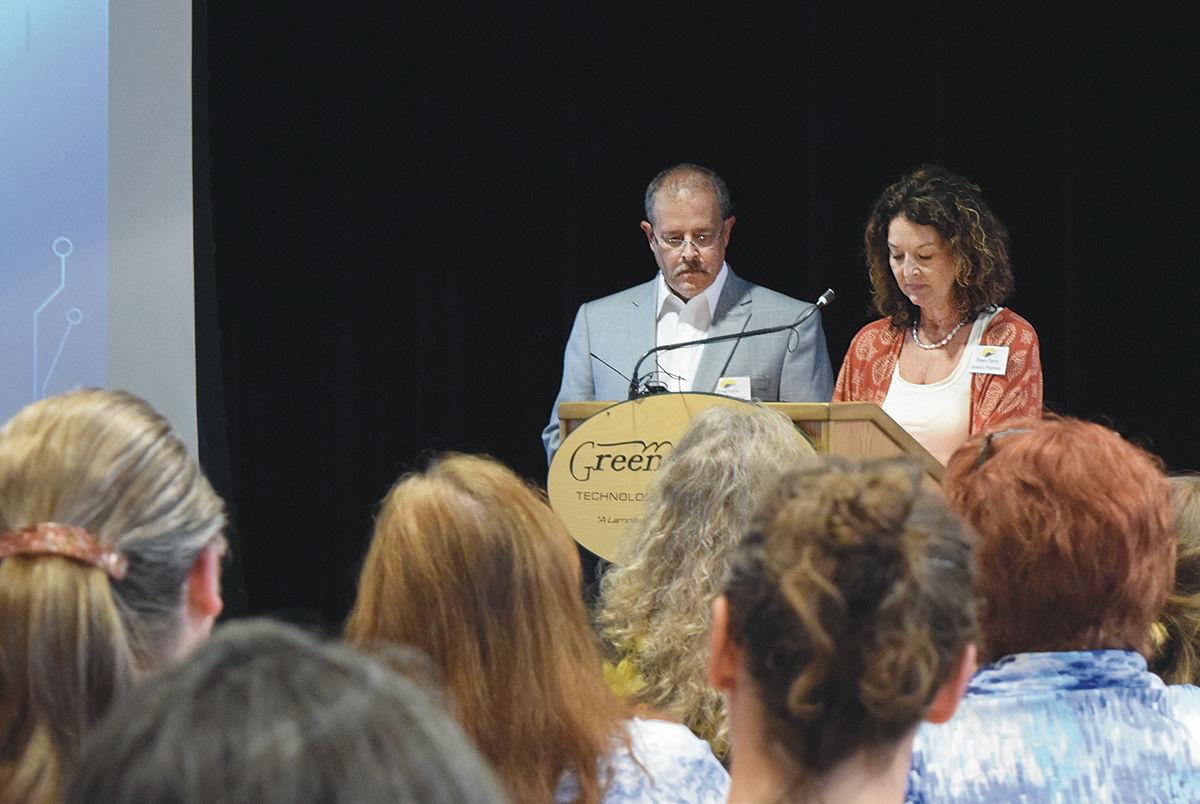 Greg and Dawn Tatro, who lost their daughter Jenna Rae at age 26 to an overdose in February, spoke about Jenna’s struggle and the nonprofit they created, Jenna’s Promise, to help others move past their addictions. 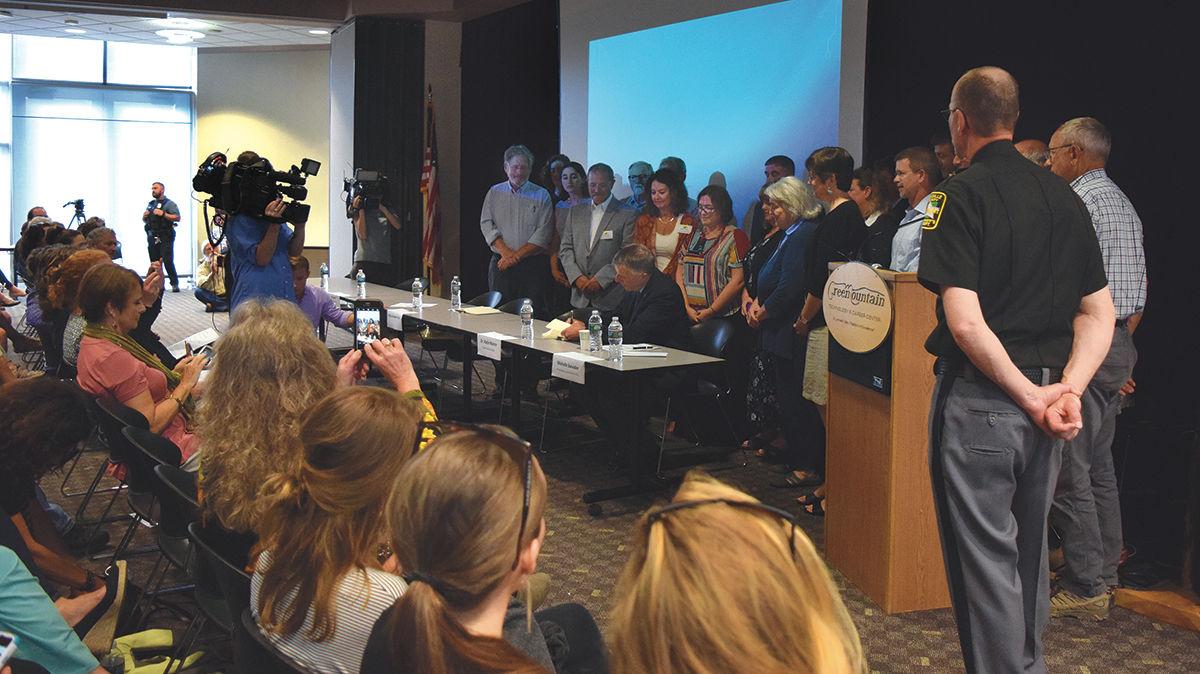 Greg and Dawn Tatro, who lost their daughter Jenna Rae at age 26 to an overdose in February, spoke about Jenna’s struggle and the nonprofit they created, Jenna’s Promise, to help others move past their addictions.

A gathering Tuesday night in Hyde Park to discuss Vermont’s struggles with opioid addiction was somber, serious, but ultimately hopeful as people in recovery shared their stories, research and optimism for the future.

Among the grieving optimistic were Greg and Dawn Tatro, whose daughter Jenna Rae died of an overdose Feb. 15 at age 26.

The Tatros were featured speakers Tuesday.

They spoke about Jenna’s commitment to recovery, and how it seemed at times that her addiction had hijacked her brain, “like dark clouds blotting out the sun,” Greg said.

“I saw that Jenna got sucked in,” Dawn said tearfully. “Jenna would tell me, ‘I hate my life. I never wanted to be an addict. I can’t stand looking at myself in the mirror. I can only imagine how you feel looking at me and who I’ve become.’”

Jenna fought her addiction for six years. Before she died, she spent time in a recovery center in New Hampshire, and told Dawn when she got out that she wanted to help other people recover from their addictions.

The Tatros have started a nonprofit to help fulfill their daughter’s wishes. They plan to turn St. John’s the Apostle Church in Johnson into a treatment and recovery center, with a health clinic on site, they told the 250 people at the forum.

“We are continuing this journey now without Jenna,” Dawn said. “Addiction is a disease and it can be treated.”

Greg blames fentanyl, a synthetic opioid often mixed with heroin for street sale, for the increase in overdose deaths. It’s 50 times as powerful as heroin, and is playing a “devastating, murderous role” in Vermont’s opioid crisis, Greg said.

He says fentanyl caused twice as many overdose deaths in 2017 as heroin did.

“It may as well be a weapon of mass destruction, as far as I’m concerned,” he said.

“Dawn and I refuse to be ashamed of our situation and our loss. … I ask you to imagine a place that provides hope for those who have none. There can be no turning back,” Greg said.

The Tatros got a standing ovation.

Before the Tatros spoke, Gov. Phil Scott talked about the importance of treating addiction, then signed a law to establish a substance misuse prevention advisory council, plus the job of chief prevention officer.

“We must move forward. We must persevere,” he said. “People are counting on us to continue to win this battle, and it is an uphill battle at that. The truth is, success will be counted one life, sometimes one day, at a time. A young man in recovery going back to work. A mother seeing the light in the eyes of a child once thought lost forever. A community without fear of crime and violence, and one less child brought into this world affected by addiction. This will be success,” Scott said.

He highlighted progress already made — the overdose-reversal drug naloxone, made widely available to first responders.

“We can’t arrest our way out of this,” Scott said. “I can’t underscore enough the importance of connecting with other people.”

Ed Baker — a social worker in private practice, a drug and alcohol misuse counselor, and a person in recovery himself — spoke about the mechanics of addiction.

“We face the most pressing health care emergency we have seen in our country” since the 1900s, Baker said.

He says addiction affects parts of the brain that control learning, memory, reward, motivation and decision-making.

“The entire person is affected,” he said.

He asked people to keep three words in mind: complex, gradual and innocent.

Addiction is complicated, he said; it’s not a matter of trying one pill or having a single drink.

A combination of genetic risk, likelihood of exposure and adverse childhood experiences, which can alter a person’s brain chemistry, determines whether he or she is prone to addiction.

“People don’t choose to be at risk for addiction,” Baker said. And once a person’s brain has been hijacked by dependence, “that person has no choice but to follow the addiction. … It’s a brain disease.”

Becoming addicted is a gradual process, Baker said, from abstinence to early use to intentional use to patterned use to problematic involvement.

Many people use alcohol in an intentional and patterned way, he pointed out; how many of us crack open a cold one on a Friday night?

However, many people who are not addiction-prone take constructive feedback about their use, such as reprimands for being late for work or loved ones’ concern, and modify their behavior.

People with addictions can’t do that.

“Addiction is continued use despite consequences,” Baker said.

He used the analogy of a rainbow to help people understand how use turns into addiction — “where does red become orange?” he asked. “They all bleed into each other.”

“I have never, ever met a person who has chosen to live a life as an addict,” he said. “Addiction wears a cloak.”

He encourages people to be “softly spoken advocates” — to use compassionate language when talking about those with substance misuse disorders. Don’t call them addicts; call them people with addictions. “Non-medical use” is preferred to “recreational use.”

“It’s not a criminal behavior. It’s a chronic disease of the brain,” Baker said.

Young people are particularly vulnerable to addiction, said Michele Salvador, a substance abuse consultant with the Vermont Department of Health.

The percentage of kids under age 15 who start using and get hooked is nearly seven times higher than if they’d waited until they were 21, she said.

“The brain isn’t finished cooking before the age of 25,” Salvador said.

She said sometimes risk behaviors come from the rest of society, especially in Vermont, with its relaxed attitudes toward alcohol and marijuana — paint and sips, tax and regulate, beer tastings at farmers markets, adults using substances at kids’ birthday parties.

“We need to realize all of our kids are at risk,” Salvador said.

Scott said Vermont is a national leader in its hub-and-spoke model of treatment, with central hubs around the state connected to innumerable professionals and volunteers in the most rural parts.

Dr. Katie Marvin, a physician with Stowe Family Practice who has spoken at all four of these opiate forums, remarked at the robust turnout — nearly 250, standing room only around the fringes, and people spilling out into the hallway.

Marvin and most other doctors have cut down on issuing prescriptions and become more vigilant in recognizing risk factors and assisting patients in seeking recovery, she said. She is, however, certified to prescribe opioid treatment medication.

A couple from Jericho who didn’t give their names said they drove to the summit just to meet the Tatros. The couple lost their son to an overdose a decade ago, and they didn’t have people like the Tatros, who were so open with talking about their daughter’s addiction , and now her death.

Dawn Tatro said it wasn’t easy six years ago, either. She and Greg “used a lot of Google” to find treatment options and had to often fly to places like California to find a place where Jenna could try to recover.

“Greg and I were so embarrassed. Who could we even talk to?” Dawn said. Eventually, a friend referred them to the Recovery Center, “which was a godsend.”

Greg Tatro likened the situation to the safety tutorial on airplanes, where the flight attendant reminds parents to don their oxygen masks before they put their kids’ masks on. Parents also have to take control when a child becomes addicted, because their kids aren’t in control. But finding advice on how to do that isn’t as easy as a voice over the airplane speakers.

“You have to help the ones dealing with the ones being treated,” he said.

Renovations continue at the former St. John’s Catholic church in Johnson, as a largely volunteer group turns it into a substance abuse recover…