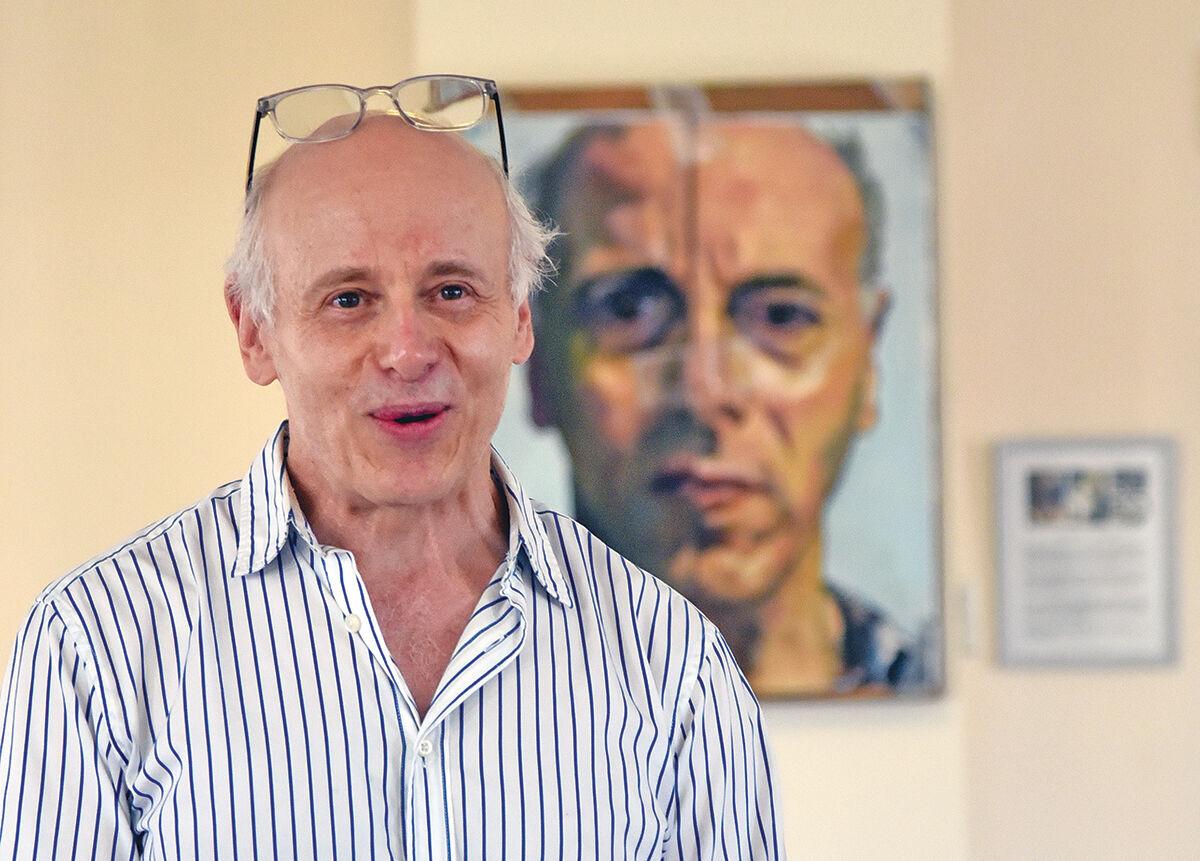 One of Jamie Rauchman’s self-portraits depicts his face sliced in half and taped back together. 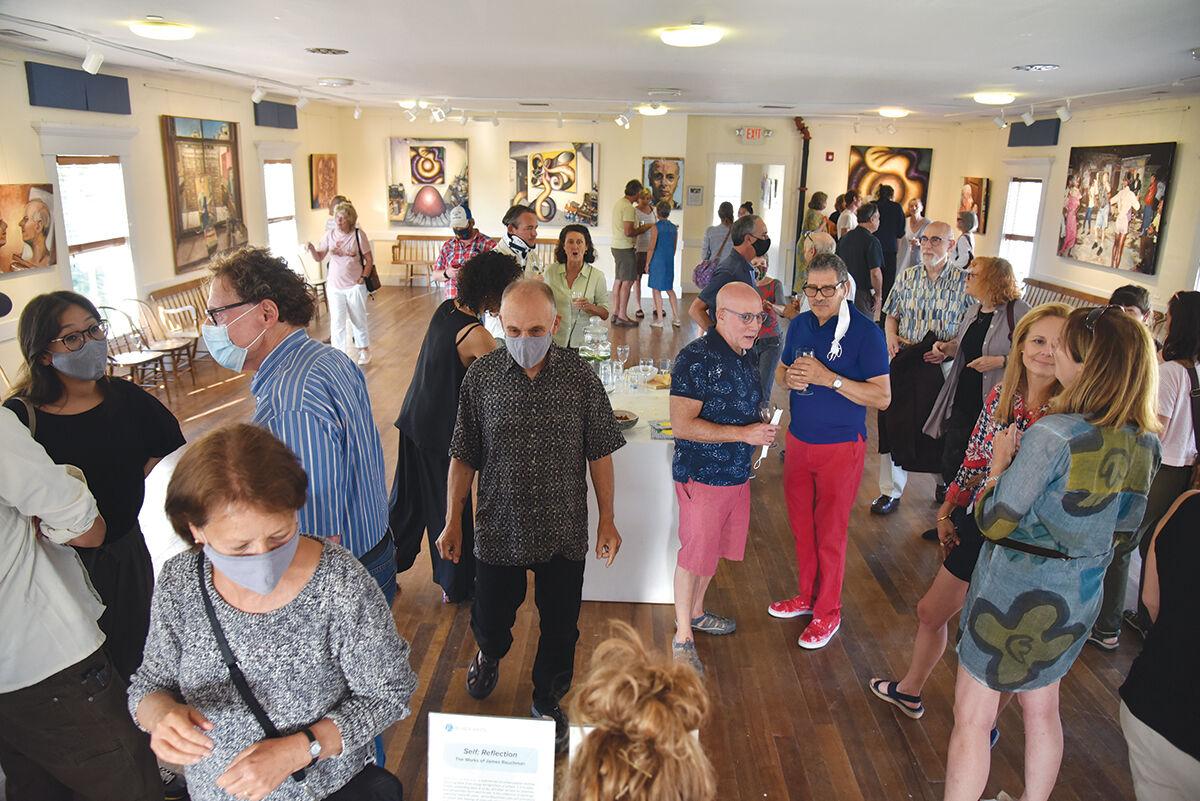 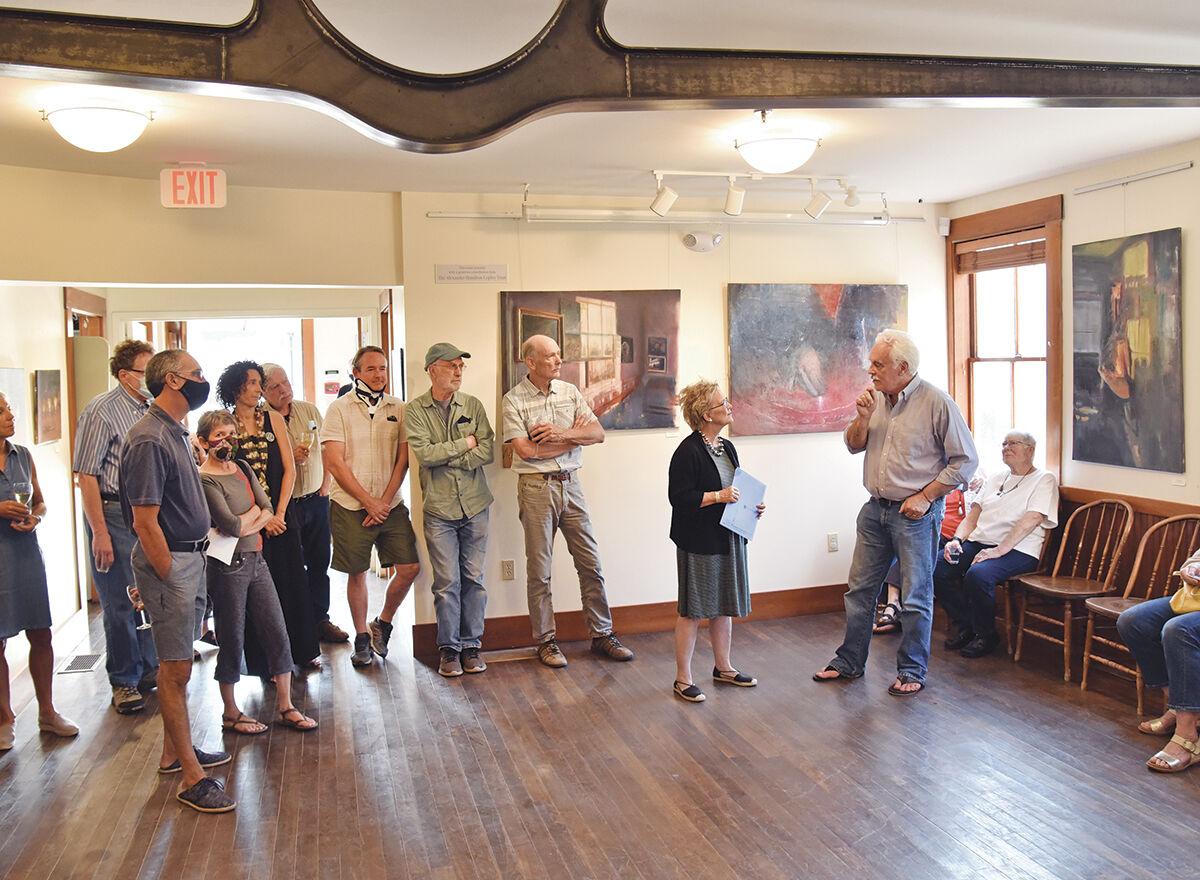 In the downstairs gallery, Italian-born artist Nitya Brighenti discusses how he is inspired by shadow and texture.

Broken into chunks, stitched onto the head of Frankenstein’s monster, glimpsed in a mirror: different versions of Jamie Rauchman’s face is on nearly every wall of River Arts’ upstairs gallery in Morrisville.

He’s added to this collection of strange, swirling, sometimes comical yet stylistically beautiful self-portraits over 40 years as a full-time artist, amid a career of other muses. The paintings came “urgently, but sporadically,” he said, but he’s never unveiled them until now.

Rauchman, who lives on Randolph Road with one foot in Stowe and the other in Morrisville, is one of two artists featured in the community art center’s first in-person gallery opening in over a year and a half. Fellow Vermont artist Nitya Brighenti’s work in the center’s downstairs gallery takes another approach to self-portraiture, playing with boundaries and the ineffable borders of color and light.

The art center flooded with guests on a bright Thursday afternoon in early August for the opening, each thirsty for art and human connection.

There’s a lot of human connection in Rauchman’s work. Large canvases featuring his eye, his nose and his mouth greet guests as they round the corner past River Arts’ front door to head upstairs; echoes of one self-portrait appear, hinted at, in some of the other paintings; and perhaps the largest canvas in the room depicts Rauchman mid dance step, in a gaggle of joyous bodies, with a whisper of a smile visible on his downcast face.

“I started painting self-portraits because ... I was so damn confused about who I was and my place in the world. Self-portraiture has given me a way to visually figure myself out.”

“I started painting self-portraits because ... I was so damn confused about who I was and my place in the world. Self-portraiture has given me a way to visually figure myself out,” Rauchman said.

Many of the paintings carry a whimsical feeling that makes the viewer feel like laughing and crying and hungry for more all at the same time. But humor makes its bed with pain, Rauchman noted.

From growing up as a gay kid in the 1950s and 1960s, to exploring his identity as an artist, Rauchman explained he’s used self-portraiture “as a way of just affirming my own existence.”

He often felt pressure from his family not to admit his sexuality. Negative reactions from relatives were usually “brushed under the rug,” he said, but “the worst part was the silence and disappointment on the faces of parents, grandparents, uncles, aunts and cousins. People loved me before I delved into my sexuality and sometimes did not love me afterwards.”

While his physical self has never felt threatened, he can’t say the same for his psychological self.

Rauchman felt incredibly nervous to unveil this collection of self-portraits for the world to see, although, he admitted laughing, he’s generally a nervous guy. The self-portraits are “very personal and not easy to sell works,” Rauchman explained, so he’s never organized a show like this before.

That’s part of what makes the Vermont community and family at River Arts so special, explained Lisa Wolfgang, co-director of events and programs at River Arts.

“The nice thing about this show is that, as Jamie said, in other exhibitions, he would have to find the right work that would sell and instead, he has the liberty to have a conversation with our community and really have a narrative through his work,” she said.

One of the gallery curators, Beth Weintraub Liberman, who first journeyed to Rauchman’s studio after the call for artists, recalled how his self-portraits started to speak to her, even though his application was full of landscapes.

“It was just really powerful,” she recalled. “This is a difficult thing to be able to say, ‘This is who I am, this is what I do, take me seriously.’... He took the path of the self-portrait and broke it open.”

Yes, he knows he’s a little narcissistic, Rauchman added, drawing laughs from the crowded gallery. “But I hope that’s not the main thing that this work is about.”

Brighenti, another Vermont artist, is showing his work in River Arts’ downstairs gallery. His moody, sometimes abstract paintings contrast Rauchman’s realism, offering a peek into another way of considering self-reflection and portraiture.

Born in a small town in Italy with a climate like Vermont, Brighenti moved from Kathmandu, Nepal, to New York City to Hawaii before settling in the Green Mountain State. He comes from an architecture background, although he tries to avoid harsh lines in favor of texturizing boundaries.

Part of what he loves about art is the mystery. At the opening, he gestured to a large canvas, at first glance dark but with layers of color and shadow that seemed to change when viewed from different spots in the room. “I can’t understand myself, what is this,” he said.

Sometimes his work is inspired by visions and dreams, he said, sometimes from photographs or movies. A series of sketches inspired by Rembrandt on display provided him an opportunity to return to the famous European artist.

In “Shadows of Montpelier,” Brighenti depicts the Vermont capital on a clear day, with hazy lines as if not quite in focus, but without the iconic gold dome.

In early 2020, the River Arts board came together to rethink their strategic plan with a move toward more diversity and inclusion, said Wolfgang. While the art center hosted some programming during the pandemic and has thrived with a steady stream of summer activities like crafts at Wednesday Night Live and Music on Main, the in-person opening felt momentous.

“I feel like it’s a fantastic revival,” Wolfgang said. “We’ve been really careful for a long time and to be able to have such a wonderful turnout, a diverse group of people and a really interesting conversation — it’s really fun.”