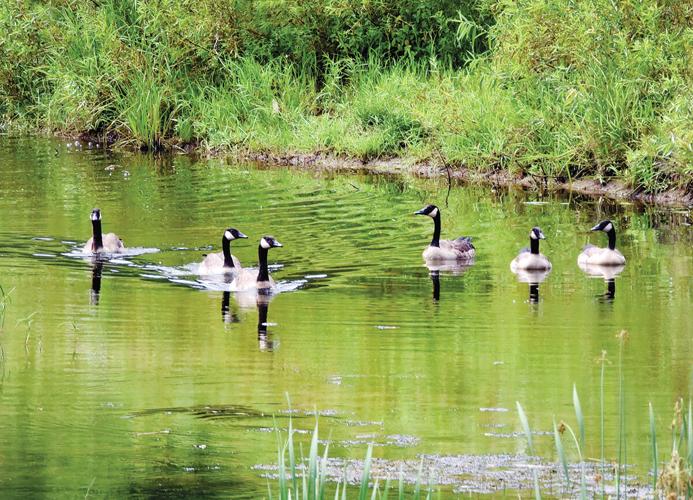 A gaggle of geese enjoy the cooling waters of Lake Lamoille. 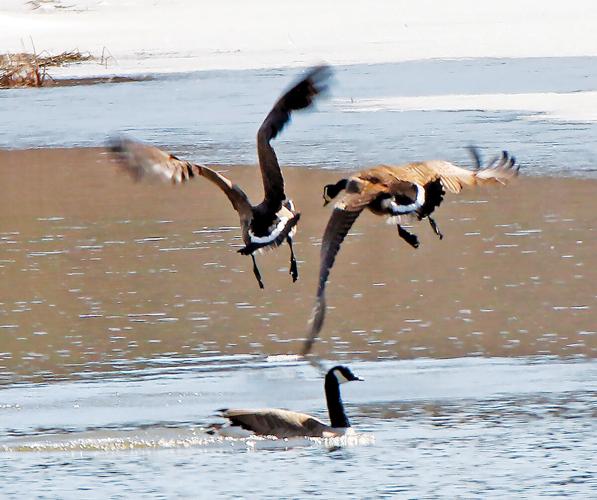 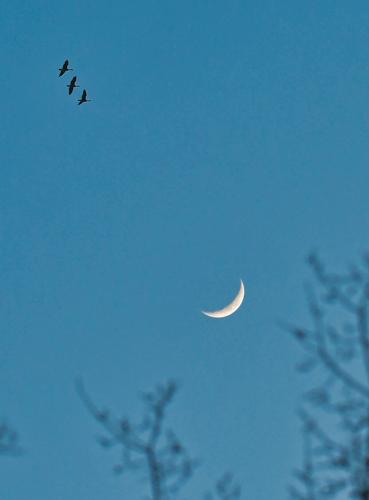 Do geese fly over the moon? Evidently so, as this serene shot taken in Stowe by photographer Gordon Miller reveals.

A gaggle of geese enjoy the cooling waters of Lake Lamoille.

Do geese fly over the moon? Evidently so, as this serene shot taken in Stowe by photographer Gordon Miller reveals.

It’s open season on Canada geese as lakeside residents and wildlife officials grapple with a growing population that can also be a bit of a nuisance.

The Vermont goose population has been on the rise over the past few decades according to Vermont Fish & Wildlife’s David Sausville, though it has recently leveled out.

Populations of resident geese — or those that raise their goslings in the state’s lakes and may even hunker down for the winter — have proven particularly troublesome with the amount of excrement produced along with nuisance behavior and occasional aggression.

Lake Eden saw such a geese invasion this summer.

“On the lake, we have the town beach and Lake View Campground, which also has a beach, and they’re having big problems because they have lawns and they have the sandy beach areas,” Art Curcillo, president of Lake Eden Association, said. “They’re constantly picking up poop on a regular basis, so it’s been a big problem for both. It’s having a very negative effect on their business, so to speak.”

Curcillo estimated a flock of over two dozen kept a consistent presence at the lake this summer. Even though their visibility waned by summer’s end, other Eden residents resolved to shoot as many of the birds as possible during Vermont’s Canada goose hunting season, which runs through Sunday, with another window likely opening this winter.

Douglas Dezotelle went before Eden’s selectboard in August to get permission to hunt the geese, citing their nuisance to property owners and as a source of lake pollution. Up to eight geese can be bagged a day during the season, and it can be done from a boat without securing bordering landowners’ permission.

Dezotelle couldn’t be reached to learn if he ended up with any trophies, but Curcillo said he hasn’t heard much in the way of gunfire from the lake.

Geese hunting is encouraged by the U.S. Department of Agriculture and Vermont Fish & Wildlife as an important tool to manage the population.

Protect Our Wildlife, a Stowe-based nonprofit that advocates for wildlife, supports in-season geese hunting if they are eaten and hunting laws are properly followed.

Geese mate for life and are continually drawn back to areas where they’ve successfully nested. Brenna Galdenzi, president of Protect Our Wildlife, pointed out that hunters have killed many of the natural predators of geese, contributing to their population growth.

Sausville attributed the ubiquity of the birds to the 1930s when Canada geese used as live hunting decoys were set free. The practice was banned in 1935.

Curcillo has managed to keep the geese from his property for years without having to fire a shot by planting lots of shoreline vegetation with little lawn area.

The manicured lawns and sandy beaches that make lakeside property and public beaches appealing to the public are the same elements that cause geese to take a gander.

“They love mowed pasture areas during the springtime after the young have come off. If you look around the lake, you have all those nice, mowed lawns. That’s just perfect grazing habitat to a goose,” Sausville said.

While Curcillo advises fellow private waterfront property owners to follow his lead by fostering a vegetation-heavy shoreline, managing public areas can be a little trickier.

Lake Eden is far from the only regional lake to grapple with a geese problem. About a decade ago, geese caused such a ruckus on Lake Elmore that the USDA’s Animal and Plant Inspection Service had to intervene.

“They arrived (30-35 of them) in May and became a real nuisance in a short time,” said Mary Twombly, former president of the Elmore Lake Association. “They started encroaching on lawns of lakefront property owners and creating a terrible mess with their poop. They also discovered the beach and created a bad situation there to the effect that people had to be very careful where they stepped as they made their way across the sand to the water to go for a swim.”

Fred Pogmore, a USDA Animal and Plant Health Inspection Service agent, was called to intervene. He arranged for the birds to be rounded up in humane cages in June, while the birds were molting and unable to fly.

Pogmore encourages a variety of non-lethal forms of geese deterrent, including invisible or low-impact fencing along shorelines, general harassment of the birds and even pyrotechnics, a projectile that makes a loud noise upon impact that will frighten the fowl.

Legal harvest, as Pogmore calls hunting, is important as well when dealing with residential geese. Geese who hatch chicks on a body of water develop site fidelity, meaning they’ll attempt to return to the same place next year if they migrate for the winter.

Sometimes homeowner associations will get creative to sever the bond Canada geese have to their lake home by rubbing vegetable oil on a nest of goose eggs to prevent them from hatching, which prevents the geese from forming an attachment to the area.

While Lake Elmore hasn’t seen a goose problem quite so bad in recent years, battling the geese is a yearly battle in larger bodies of water.

The problem is a perennial one at popular parks like Waterbury Center State Park, home to Waterbury Reservoir, and particularly Crystal Lake in Barton.

Caputo said park workers have had a great deal of success with non-lethal deterrents, including pyrotechnics, Coyote decoys, which must be moved around and strategically managed to keep the geese from growing indifferent to them, and the stringing of simple lines across the shoreline to prevent the birds from waddling up onto the sand or grass.

The key is to strike early in the season.

“If we can harass them early enough, we can make progress,” Caputo said.

The geese trouble on Lake Eden, Lake Elmore and state-owned lakes are mere skirmishes in the seemingly endless fight to manage the country’s geese population. With keeping a balanced population in Vermont in mind, Sausville said Fish & Wildlife will likely offer a second Canada geese hunting season from late December through early January.

“It’s really a problem up and down the Eastern Seaboard,” said Pogmore. “I know from Virginia all the way north, there’s problems with geese in the summertime. Resident geese populations expanded, and you can find geese about anywhere now. Some bodies of water don’t have problems, some bodies of water do and sometimes that all has to do with nesting habitat in the summertime.”

While I appreciate the concerns from homeowners (regarding lawns) and beach goers, has anyone given consideration to the fact that these animals are in their natural habitat (their homes), many of which were encroached upon by home builds? Or the fact that Canadian Geese eat mosquitos and dandelions helping to mitigate the mosquito population and keep pollen a bit better managed (without harmful pesticides)?

It is also noted in the article that these geese mate for life. How can anyone willing take away someone's mate? All because they are being seen as a nuisance in their own homes? We need to and can do better here. Some corporations allow the geese to stay on property as they help prevent vandalism and break-ins (they do not like to be disturbed). Many playgrounds use a simple metal device that emits a sound that is audible to the geese (not audible to most humans) and keeps them away from that area. Why is this not being tried in the beach area? Killing wildlife (which is an essential part of the ecosystem that makes Vermont the beautiful state it is) is not a viable solution. It only causes another problem when the next "nuisance" happens to be the prey of the geese who, like their predators will see a decline in population.