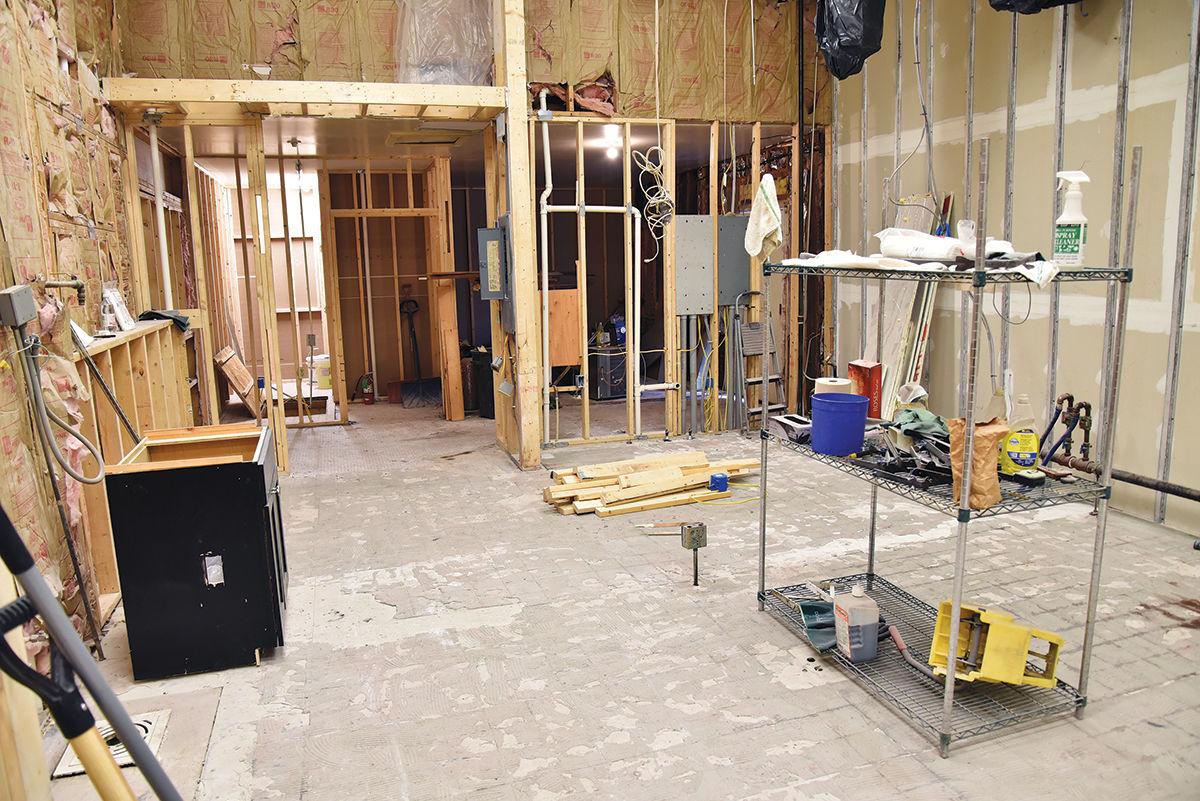 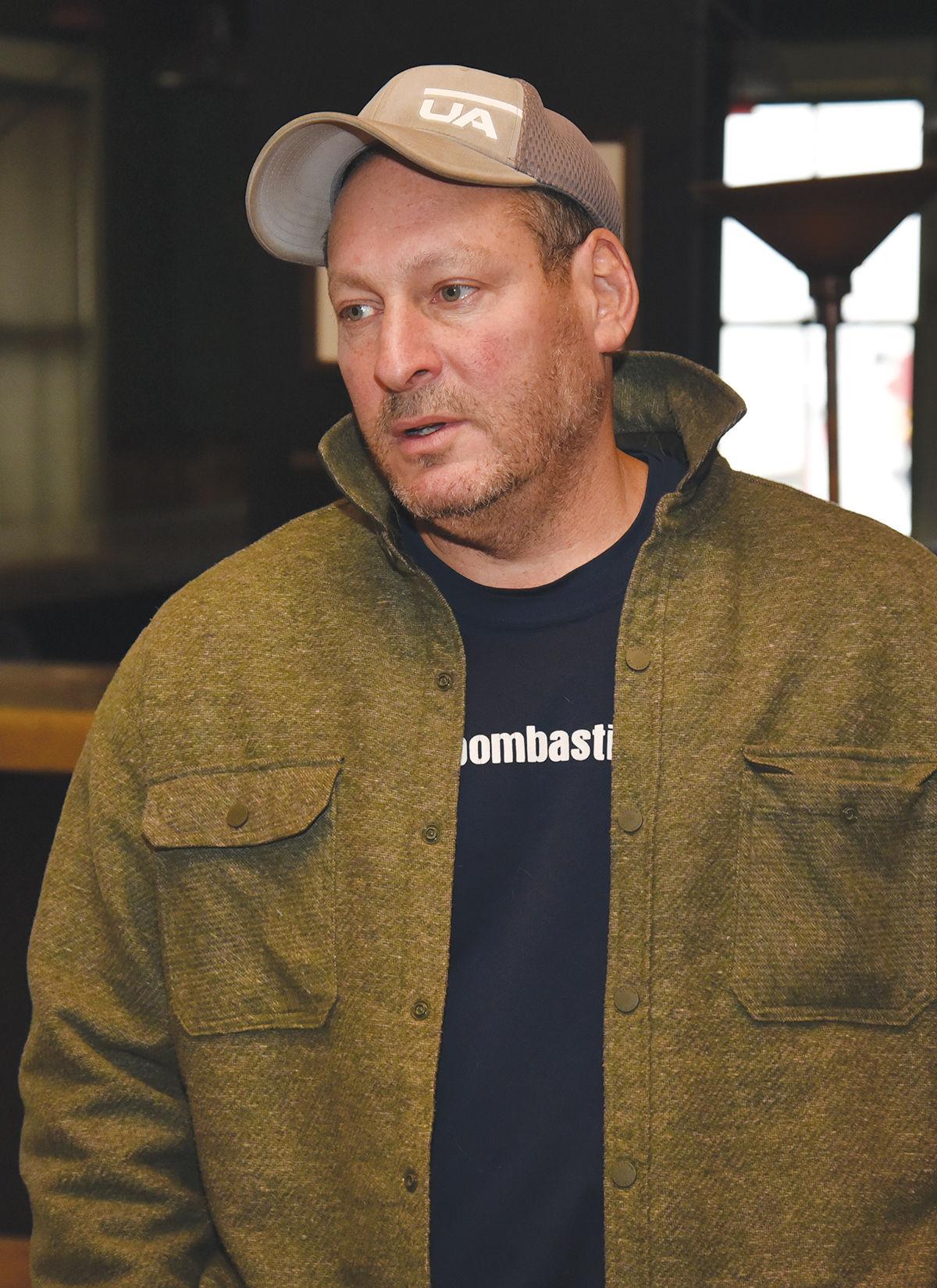 Jimmy Goldsmith and his wife, Kim, own 10 Railroad; they hope to reopen in 10 to 12 weeks. 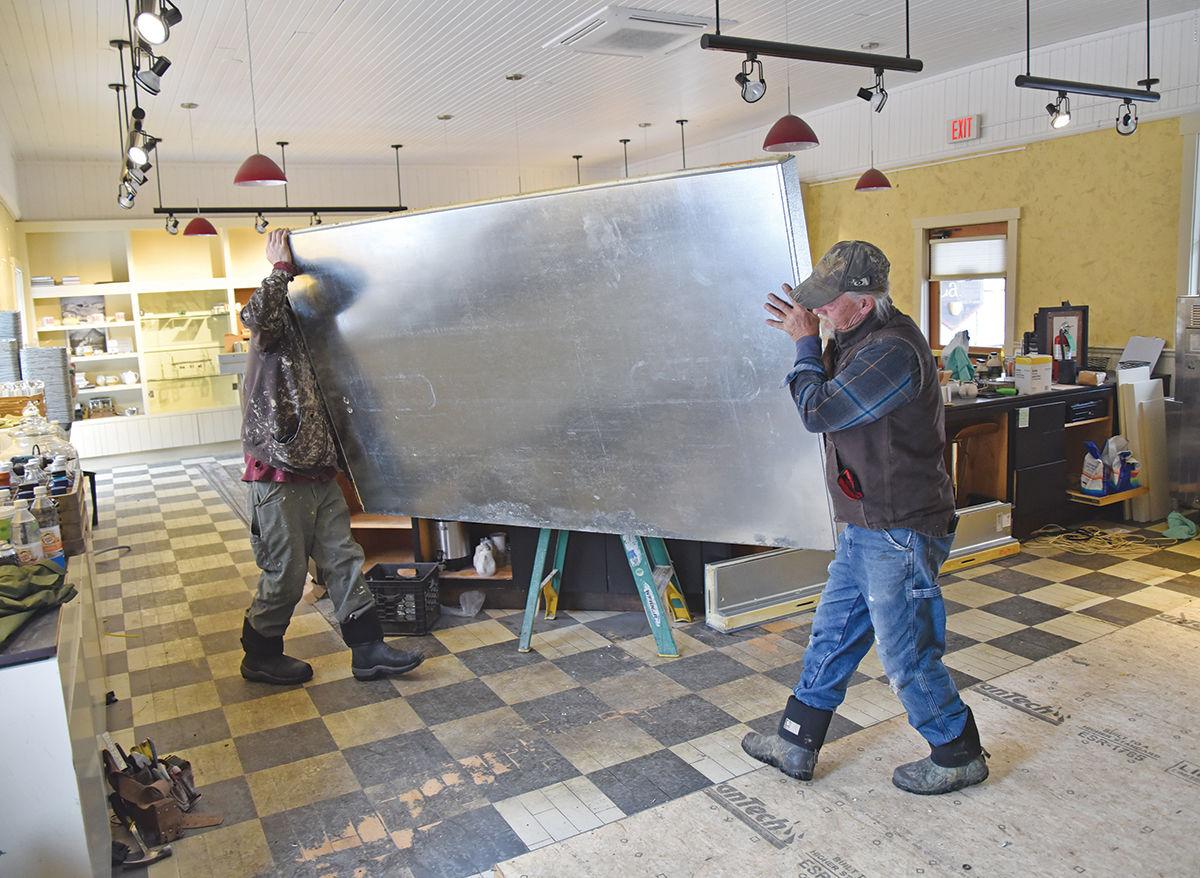 With 10 Railroad gutted, workers begin to rebuild the restaurant, which could reopen in 10 to 12 weeks. 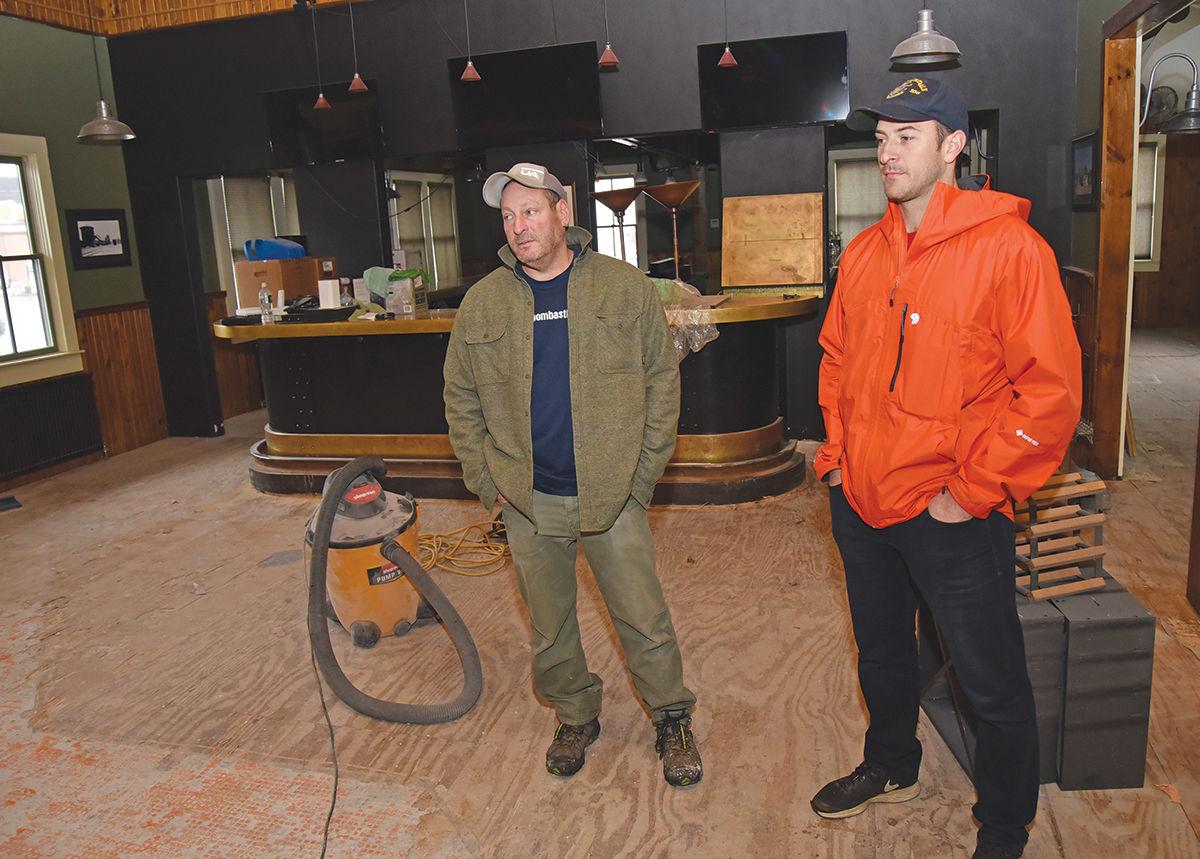 With 10 Railroad gutted, workers begin to rebuild the restaurant, which could reopen in 10 to 12 weeks.

Two months ago, septic pumping company Hartigan, hired to clean out the grease traps at Morrisville’s 10 Railroad Street restaurant, made a critical mistake and sent untold gallons of sewage into the kitchen and the rest of the building.

That was the directive from the Vermont Department of Health to Jimmy Goldsmith and Kim Kaufmann, the restaurant’s owners. They also own the building.

Now, the one-time railroad depot is stripped, the floorboards all taken off, the studs visible on all the walls. The demolition nearly complete, now it’s time to start thinking about renovating and, eventually, reopening.

Goldsmith, giving the newspaper a tour of the place Monday, said he thinks it’ll be another 10 to 12 weeks, at least.

“It was a big hump to get to here, and there was a long push to get the place demoed,” he said. “Then, it’ll depend on things like the lead-time for getting new kitchen equipment.”

The kitchen Monday was empty enough that it looked far bigger than the old one. It’s like that spot in the construction phase where you can tell it’s a room — there are studs and a ceiling and a slab for a floor — but you just can’t quite tell what room it is.

“Blew instead of sucked”

According to the Vermont Department of Health report, the incident occurred at 7 a.m. on Oct. 17, when the hose the Hartigan worker was using to clean the grease trap became pressurized and released sewage from the truck into the kitchen.

Goldsmith said a prep cook, who had just arrived, said it was like when a firefighter loses control of a hose, and it starts bucking and thrashing, spraying every which way.

Except, instead of water, it was whatever Hartigan had in the back of the truck.

“He blew instead of sucked,” Goldsmith said.

The floor, walls and ceiling in the kitchen and beyond were spattered with the raw sewage. The health department report said there was between 1 and 4 inches of sewage in the kitchen and the basement/crawl space was coated due to the overflow and leaking from the suddenly pressurized grease trap.

The prep cook “quickly got himself outside and called Andy (Figliola, the restaurant’s chef), and Andy called me,” Goldsmith said. “I just hung up, thinking he was joking. And then he called right back.”

In a statement Wednesday morning, Chris Baker, vice president of safety at Wind River Environmental, the Massachusetts company that owns Hartigan, said, “On October 15, 2019, our operator did have an unfortunate incident that resulted in a spill at 10 Railroad Street. We responded immediately by engaging a professional emergency remediation service to clean the impacted areas. We regret that this situation occurred, and have taken action to ensure that this type of situation doesn’t recur.”

Hartigan hired Servpro Restoration Services to do the worst of the cleanup, which took several days. The first day was spent cleaning the floor, basement and handles of the equipment, and the second day was spent moving the equipment out of the building — it could not be cleaned.

On the third day, Servpro brought in a special “quaternary ammonia” to help with the cleanup. Rugs and rags were bagged up and removed and the company power-washed the affected areas with pressurized steam water, and vacuumed all the water up into a company tanker truck.

The health department’s report is visceral, with references to a “splash zone” of sewage and food and equipment “splattered” with sewage. The spray went everywhere — inside the oven ventilation hood, on storage shelves, on boxes stored near the ceiling of the walk-in, across the hallway and onto the office door.

According to Goldsmith, it was even worse than that report suggests, and he was told he had to strip just about the entire interior down to its skeletal structure.

“I would prefer to lead the NFL in touchdowns, or have the most home runs in Major League Baseball,” he said. “This is certainly not an accolade I was looking for.”

So far, the demolition and cleanup have been handled by the insurance companies for 10 Railroad and Hartigan. But that doesn’t pay for lost revenue, lost wages for employees, or the potential loss of even the most loyal customers who know what happened.

Goldsmith is clearly upset with Hartigan, but he refrained from casting aspersions on the company. In showing the newspaper around the building Monday, Goldsmith had his company’s in-house counsel, Jon Brigati, accompanying him, to better answer anything legally sensitive.

Such as, would the company consider a lawsuit against Hartigan?

“A lawsuit depends on how everything plays out,” Brigati said. “While we hope to avoid that, this was not our fault, and we want to be made whole.”

How much did this cost the company? Neither Brigati nor Goldsmith would place a figure on it, not yet, maybe never.

“I can tell you this: it’s a very large number,” Goldsmith. “And it’s beyond the normal person’s means to cover.”

Call it a comeback

Goldsmith is more than willing, however, to talk about how much this six-year old restaurant means to him and his wife, Kim.

The two already had buzz in the area restaurant scene with their Stowe burger joint, Blue Donkey. Although it was a tough first year opening 10 Railroad in Morrisville, their patience paid off and the place turned into a popular hangout for locals and tourists.

“I’m crushed. This has been devastating for my wife and I. It’s been a challenge, every day,” Goldsmith said. “I just want to restore the confidence the community had in us when we were rocking and rolling.”

He said customers — from town employees and local business owners on their lunch hours to regulars at the large horseshoe-shaped bar — have been in contact, offering their support, “saying, ‘I got nothing to do now on a Friday night.’”

One of those locals, Nick Manosh, head of the Manosh Corp. started by his dad, Howard, has been given the job of cleaning out the kitchen grease traps in the future. No more Hartigan here.

The employees were loyal, too, and some of them had been with the place from the beginning. Goldsmith and Kaufmann helped their suddenly-out-of-work employees find jobs in the restaurant business, whether picking up shifts at Blue Donkey or the couple’s newest venture, the Stowe-located Mexican/Asian hybrid Over the Wall, or finding them places in the industry at friends’ places.

He hopes they will come back — and knows not all of them will.

“We have people say they’re gonna come back, but you never know until you reopen,” Goldsmith said.

Even though it was a significant hazardous waste incident, it didn’t take long for the obvious — and literal — potty humor to start.

“To be honest, the jokes literally started 10 seconds after it happened. You know, things like, ‘sh*t happens,’ that kind of stuff,’” Goldsmith said.

Just as those early jokes somewhat leavened the mood, Goldsmith and company are finally turning a corner from despair to excitement — because a completely stripped restaurant offers something of a blank slate, an opportunity to do things to the place that couldn’t be done before.

Head chef Andy Figliola will be back when the place reopens, and will be key in getting the kitchen renovated. They have hired Bernard Allen from Baseline Builders to do the work. Allen was in the place Monday and bashfully and brusquely shrugged off any compliments from Goldsmith. Work to do.

There was never any doubt about rebuilding. The owners have said on more than one occasion that they are interested in breathing new life into old buildings — they most recently acquired a former bank in Hardwick, and are excited to figure out how to incorporate the huge old bank vault in the middle of the place.

Goldsmith said none of this needed to happen, none of this demolition, none of the renovation. The place was already in good shape. And a lot of valuable things, both monetarily and emotionally, had to be bagged up, tossed out, destroyed.

When asked what was the single most difficult thing to part with, Goldsmith paused, said hmmm.

It was a plant, he said. A houseplant given to them when they first opened, by Sam Guy, founder of Guy’s Farm and Yard, which has a location right across the street from 10 Railroad.

That thing lasted through all kinds of abuse, from lack of watering to being stuck outside in the winter one time.

“It was like our good luck charm,” Goldsmith said. “It was symbolic of how we’ve endured and become successful here.”

Town Meeting Day is about five weeks away, when voters will elect members of their school and select boards and fill other offices.

The Lamoille South school district may be neck-deep in budget talks, but residents in Stowe, Morristown and Elmore have more than money on their minds.

Peebles closing down, Gordmans coming in

The Morrisville Plaza will soon be home to a new business.