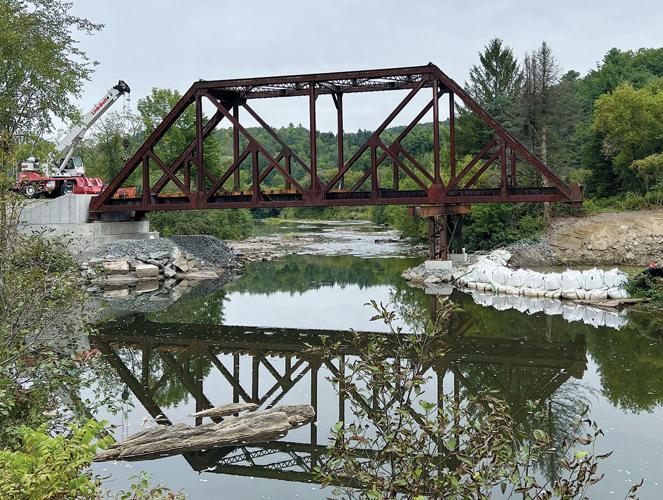 This railroad bridge near School Street in Wolcott is a perfect example of why parts of the Lamoille Valley Rail Trail are still off-limits, even with a November completion date rapidly approaching. 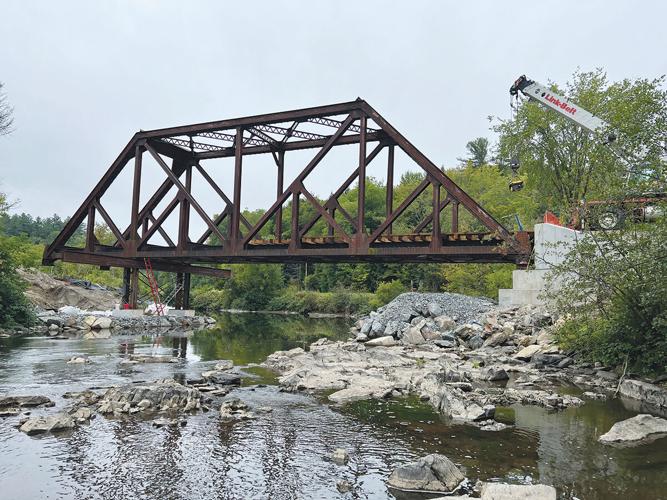 This railroad bridge near School Street in Wolcott is a perfect example of why parts of the Lamoille Valley Rail Trail are still off-limits, even with a November completion date rapidly approaching.

After two decades of piecemeal construction and grassroots fundraising efforts, the 93-mile Lamoille Valley Rail Trail is scheduled to be complete in late fall, and this summer has been perhaps the busiest construction season ever for the trail, thanks to a collection of federal and state funds aimed at finishing the cross-state trail.

According to Jackie Cassino, the rail trails planning manager for the Vermont Transportation Agency, there are still many stretches of the trail that are under construction, especially in eastern Lamoille County.

“Although some areas look like they’re ready to go, technically if it’s one of the segments that has been under construction, it is not ‘open’ open,” Cassino said.

Cassino said some sections have the crushed gravel look of a completed trail, but a person tempted to explore might find around the next corner a bunch of heavy equipment or a missing bridge.

For instance, an old steel bridge in Wolcott from the days of the operating railroad isn’t even connected to the opposite shore of the Lamoille River it has long spanned.

There is a section in the middle of Hardwick village that was completed last year, but it is something of an island surrounded by unfinished sections.

That hasn’t dissuaded some people from bypassing the orange tape or disregarding “trail closed” signs because the trail looks good, and Cassino said her office will get phone calls from someone on those sections complaining about the trail conditions.

“I say, ‘well, that’s technically not open right now,’” she said. “I understand. People are really excited for this.”

As a public right-of-way no longer traveled by trains, it is not strictly illegal to be on uncompleted parts of the rail, but it is a liability for workers running dangerous equipment, Cassino said. She said it would be helpful if people just exercise patience and let the construction crews do their work.

Instances where rail trail use might rise to the level of illegal activity include someone “doing something super egregious” like using the trail to sneak onto someone’s private property or tearing up and down the trail on all-terrain vehicles — motorized vehicles are prohibited on the rail trail, save for snowmobiles in the winter.

In those types of circumstances, Cassino said, VTrans would contact local law enforcement agencies to deal with any scofflaws. That goes for all rail trails the transportation agency oversees.

“Our MO typically is to patrol the area on a regular basis anyway, for all four of our rail trails, and connect with people one on one as we see them, for sort of a soft touch,” Cassino said. “Because nine times out of 10, folks are generally like, ‘Oh, sorry, I didn’t know.’”

Some people have grown accustomed to using the unfinished parts of the trail over the years. For instance, in Lamoille County, the 17-mile stretch between Morrisville and Cambridge has been fully open for six years, but the part directly east of that finished portion — between Morrisville and Wolcott, has been popular for even longer with mountain bikers and runners seeking a nice trip alongside the Lamoille River.

Now that contractors are working in an earnest effort to get all those unfinished parts done, the people who have been accustomed to using them for the past two decades can get a little chagrined. Cassino said she spoke with one man who has been organizing bike-packing events for years, all over the state, including on unfinished sections of the rail trail.

“People love the gravel riding, and they love the Class 4, and this is a new thing for them to be, like, ‘What do you mean, I can’t use it?’” Cassino said. “We’re trying to work with them on reroutes and just tell them that next year, it’ll be open. So just wait.”