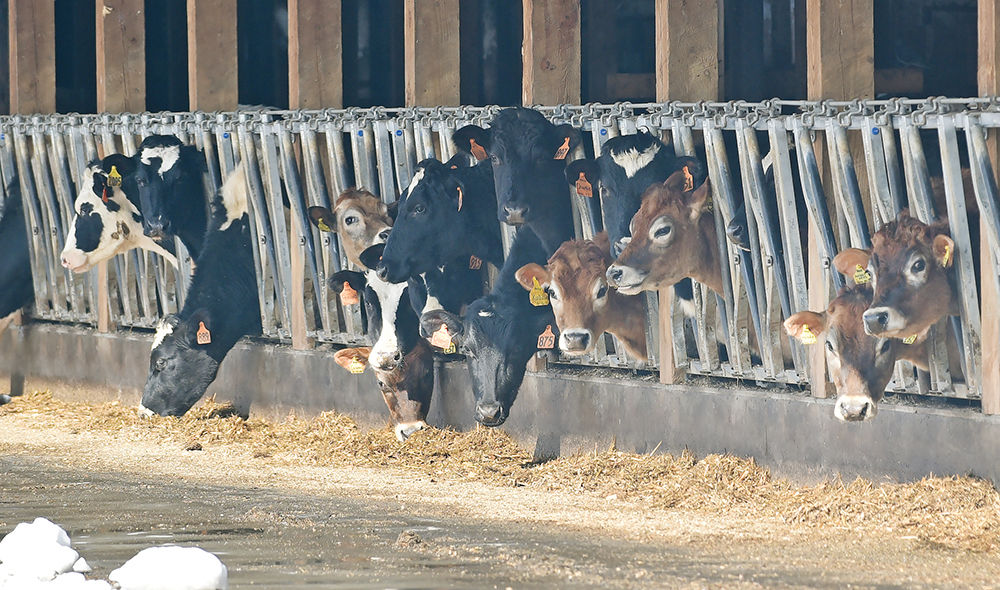 Cows line up to greet the spring sunshine and have a bite to eat at a farm off Route 100 between Morrisville and Stowe. 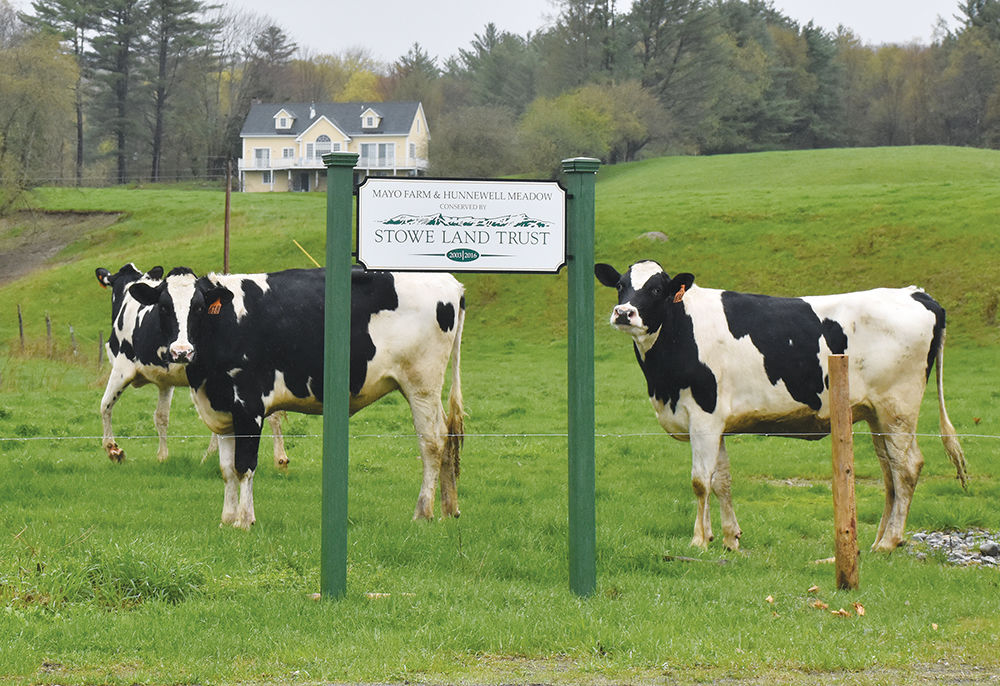 Heifers from the Percy Farm in Stowe graze at the Mayo Farm and Hunnewell Meadow, property conserved by the Stowe Land Trust.

Cows line up to greet the spring sunshine and have a bite to eat at a farm off Route 100 between Morrisville and Stowe.

Heifers from the Percy Farm in Stowe graze at the Mayo Farm and Hunnewell Meadow, property conserved by the Stowe Land Trust.

These are dark days for Vermont’s dairy farmers.

The 645 Vermont farms that make milk were already at the mercy of a volatile market with wild swings in prices. Now the coronavirus pandemic has put many of them on life support.

“COVID-19 has hit the dairy industry hard,” said Scott Waterman, communications director for the Vermont Agency of Agriculture. With people sheltering in place, restaurants closed and economies shut down, there’s not much of a market for milk, or anything you can make with it.

“Bottom line, there’s just too much milk,” said Paul Percy; he and his family operate a 400-cow farm in Stowe.

“The markets have dried up,” Waterman said. “They just don’t have a place to sell the milk.”

“We ain’t got to the bad part,” Percy said. “The bottom is really going to drop out. It will tank out in June, I expect.”

“We anticipate that May and June will be the lowest milk prices for dairy farmers in our region,” said Leon Berthiaume, a senior adviser for Dairy Farmers of America, one of two cooperatives that buy milk from farmers in Vermont and across the Northeast.

“We’ve never been in a situation like this,” said Kirk Lanphear, whose family runs a large farm in Hyde Park. “It’s even worse than 2009.”

With the market saturated and nowhere to send their milk, last month the Lanphears had to dump their milk —“35,000 pounds a day of milk for six straight days,” Lanphear said.

The number of Vermont farms has been steadily decreasing in the last decade, and now a staple in the region for decades is gone, too. Brian Jones and his family at Joneslan Farm in Hyde Park sold all their cows last week.

He saw no way out; when it costs you more to produce a gallon of milk than you can sell it for, that’s not much of a business.

And yet, dairy is still big business in Vermont — 645 farms produced 2.7 billion pounds of milk last year, which translates to tens of billions of dollars. Vermont ranks about 15th in the nation for raw milk production.

Berthiaume predicts the dairy market will strengthen as this year moves along, “but not without financial challenges for our dairy farmers.”

The pandemic has wreaked havoc with supply and demand in the dairy industry. The amount of milk being produced far outweighs the amount being consumed.

“The stay-home, stay-safe orders across the country are impacting the food service industry dramatically,” Berthiaume said. “Some consumers are buying more at the grocery store,” but aren’t making up for milk not being used in shuttered coffee shops and restaurants.

Limits on travel and tourism also hurt, as does the closure of schools and colleges across the country, and the shutdown of bottling plants.

“The most important thing in this country is food,” Percy said, but “the people producing it are working for peanuts. It’s amazing.”

“Once we start shipping stuff again, and the bottling plants fire back up, then we’ll see a different story,” Lanphear predicted.

This year appeared to hold some promise of better prices for Vermont’s dairy farmers.

And moving that milk to market cuts into that price. With trucking and other fees, “you take $2 off the price; it disappears before we ever get it,” Percy said. “If you take $2 off for June, you’re at $10.40.”

The Lanphears currently milk about 500 cows. Loss of $1 per hundredweight translates to a loss of roughly $10,000 per month, Lanphear said.

The last crisis in milk prices was in 2009. While the prices are similar, the cost of doing business has increased exponentially, Berthiaume said, so the current crisis is actually much worse.

Beginning May 1, Agri-Mark and Dairy Farmers of America began asking farmers to cut back substantially on production.

Dairy Farmers of America is offering to pay the going price for 85 percent of whatever a farm produced in March, and much less for any milk over that 85 percent.

Agri-Mark is offering farmers two choices — full price for 94 percent of their March production and much less for anything over that, or they can go month by month, receiving full price for 96 percent of what they produced the same month a year earlier.

“You take June’s production from last year, minus 4 percent, and that’s what you’re allowed this June,” said Percy, who’s on the Agri-Mark board of directors.

Farmers who sell to Agri-Mark had until this week to choose a plan, and cannot switch once they pick one.

Waterman thinks farmers could be paid as little as $7 per 100 pounds for milk that exceeds the co-op’s limits.

“They’ll only get what the market will pay,” Waterman said. “They’re really trying to roll back milk production, quickly and severely.”

The programs seem harsh, but “we need to encourage them to reduce milk production for some period of time so we can realign supply closer to demand,” Berthiaume said.

How to move forward

The Lanphears considered cutting back milk production, but the farm produced 1 million pounds of milk in March. Cutting down to 85 percent of that would mean reducing production by 5,000 pounds per day.

“Crunching those numbers, I wouldn’t have enough money to pay my employees or the utility bills,” Lanphear said. So, he and his family are going to continue producing all the milk they can and receive the much lower price per hundredweight for the final 15 percent of their haul.

“The other way, we would have had to lay some employees off. Our employees are like family,” Lanphear said. “We’re just trying to cruise through this; that’s the route we’re taking.”

For farmers who decide to cut production, there are a couple of options. One involves changing the cows’ food, and how often they receive it. Some farmers also milk three times a day and could cut back to two, Berthiaume said.

Or, there is a grimmer option.

“You could beef some of your cows,” Percy said.

There’s one other option: Farmers can sell the cows and shutter their barns, like Brian Jones.

Jones and his family had already decided to get out of the dairy business before the pandemic tanked the market.

“We’d been looking into it for a couple years,” Jones said. He found a buyer for his 320 milking cows in New York, and all his animals were trucked out last Thursday.

“We were pretty happy to get rid of them before May 1, with the low prices and being asked to reduce production,” Jones said.

Five generations of the family had been in the dairy business since 1872 — 150 years of farming.

Jones and his family hope to begin milking goats by August, and grow that herd to between 1,200 and 1,500 animals over the next few years.

The switch was motivated in large part by the low, unpredictable prices for cow’s milk.

“For sure, the price of dairy milk was a factor.” Jones said. “The downs to dairy, they’re much longer than they used to be. You can’t run or plan a business that way.”

“We’re blessed; I still think that. This is a bridge that’s got to be crossed, but we’re still blessed in the end,” Lanphear said.

“There’s probably as much hope for me as there is for those restaurant owners” who have been shut down for nearly two months, Percy said. “If they can get back into the game, dairy farming will come back and beef will go up.”

“Things have to get going; that’s what has to happen,” he added. “Your guess is as good as mine when that’s really going to happen.”

Insurance and other aid programs will help farmers recoup some losses.

“I expect farmers will need to avail themselves to whatever systems are present to help,” Berthiaume said.

Jones doesn’t think he’s the last local farmer to get out of the dairy business.

“I think the farming landscape is going to change pretty drastically this year,” he said. “I think these low prices will hang around for a while and you’ll see quite a few people go out.”

Easing up on tight controls, hospitals get OK to expand services

Fears that a huge surge of coronavirus patients would overwhelm Vermont’s health care system have not materialized, and Gov. Phil Scott announ…