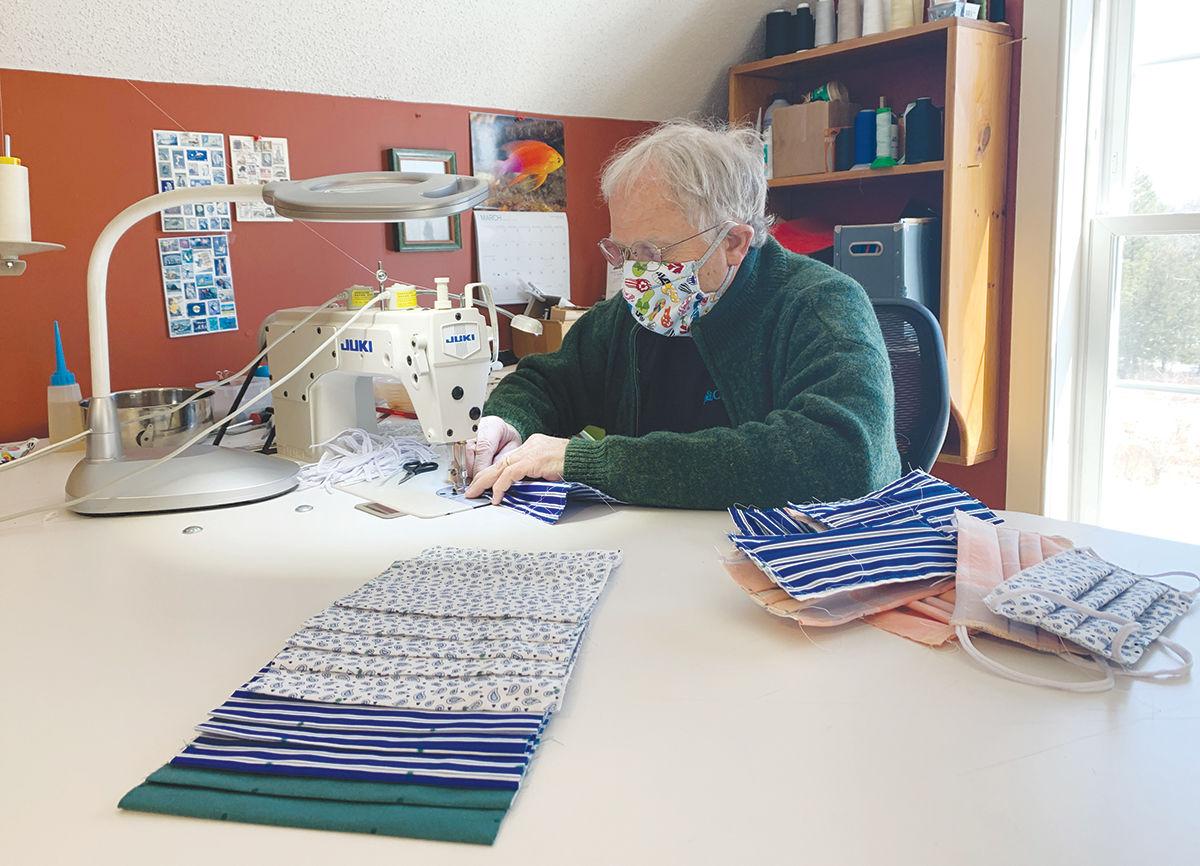 Mike Roussell, owner of The Tailor Shop in Stowe, sews handmade face masks at this home in Craftsbury. 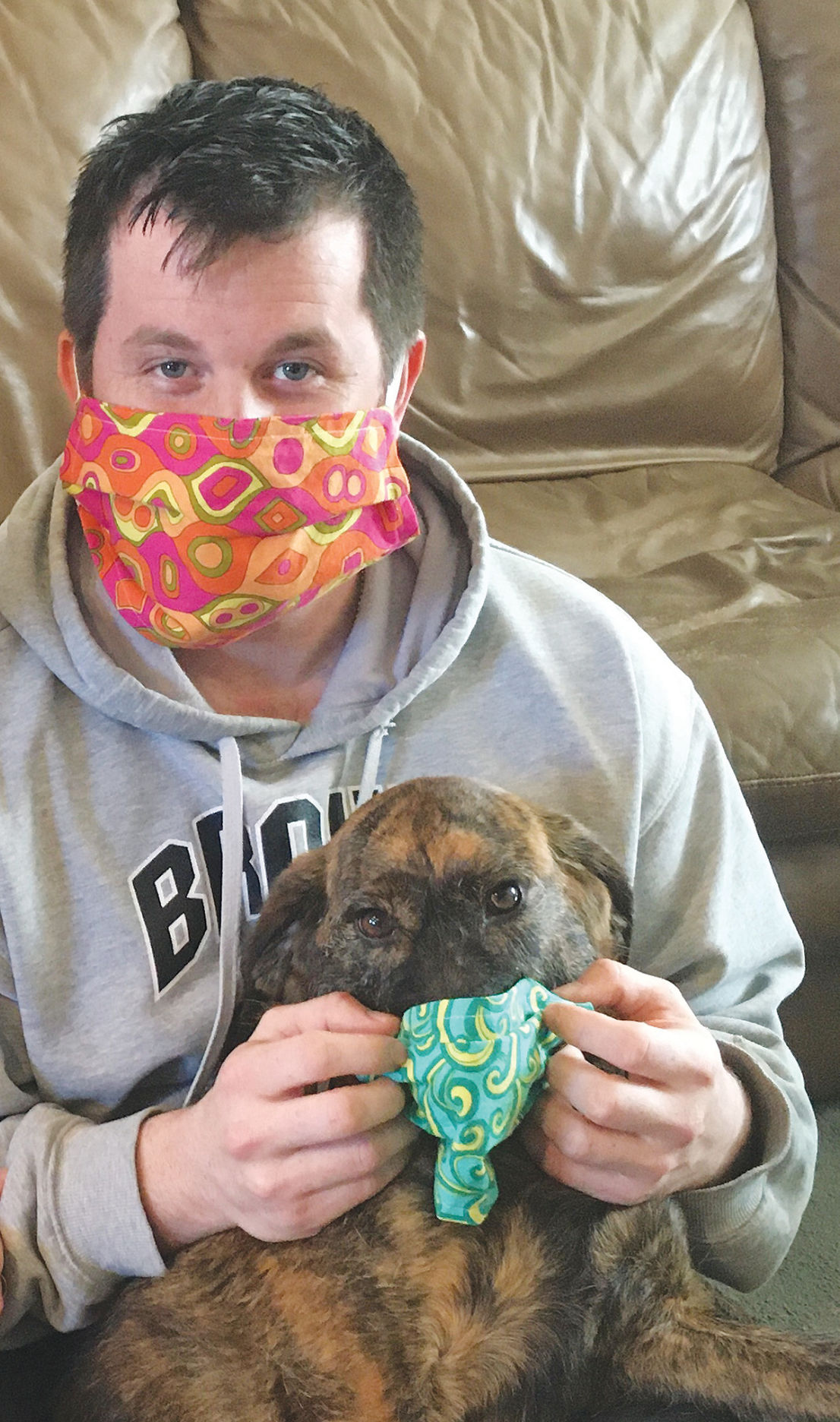 Sean McGonagill, with Andi the dog, shows off face masks made by his mother-in-law Nancy Small. 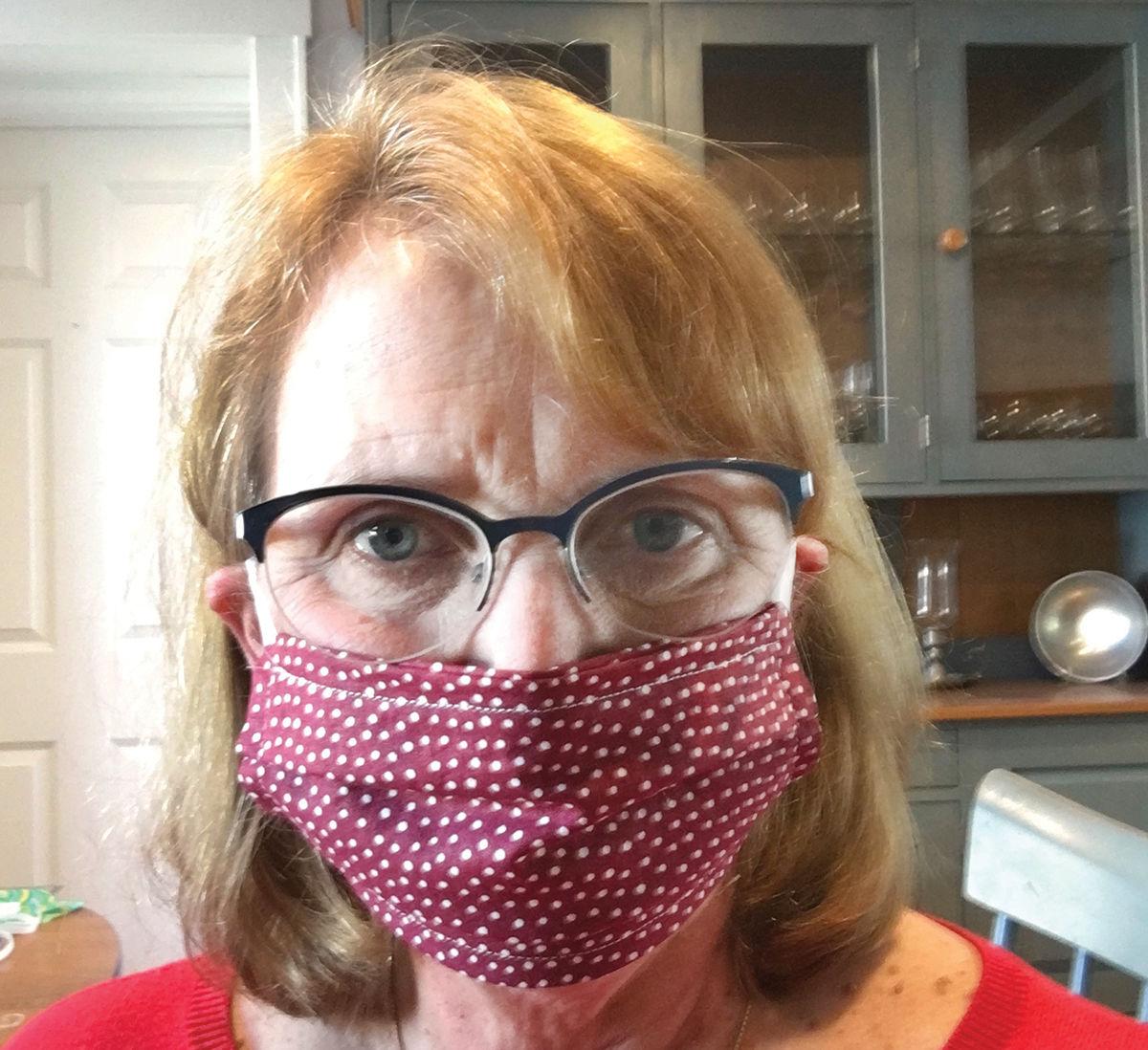 Mask-maker Nancy Small of Stowe shows off one of her masks in a selfie. 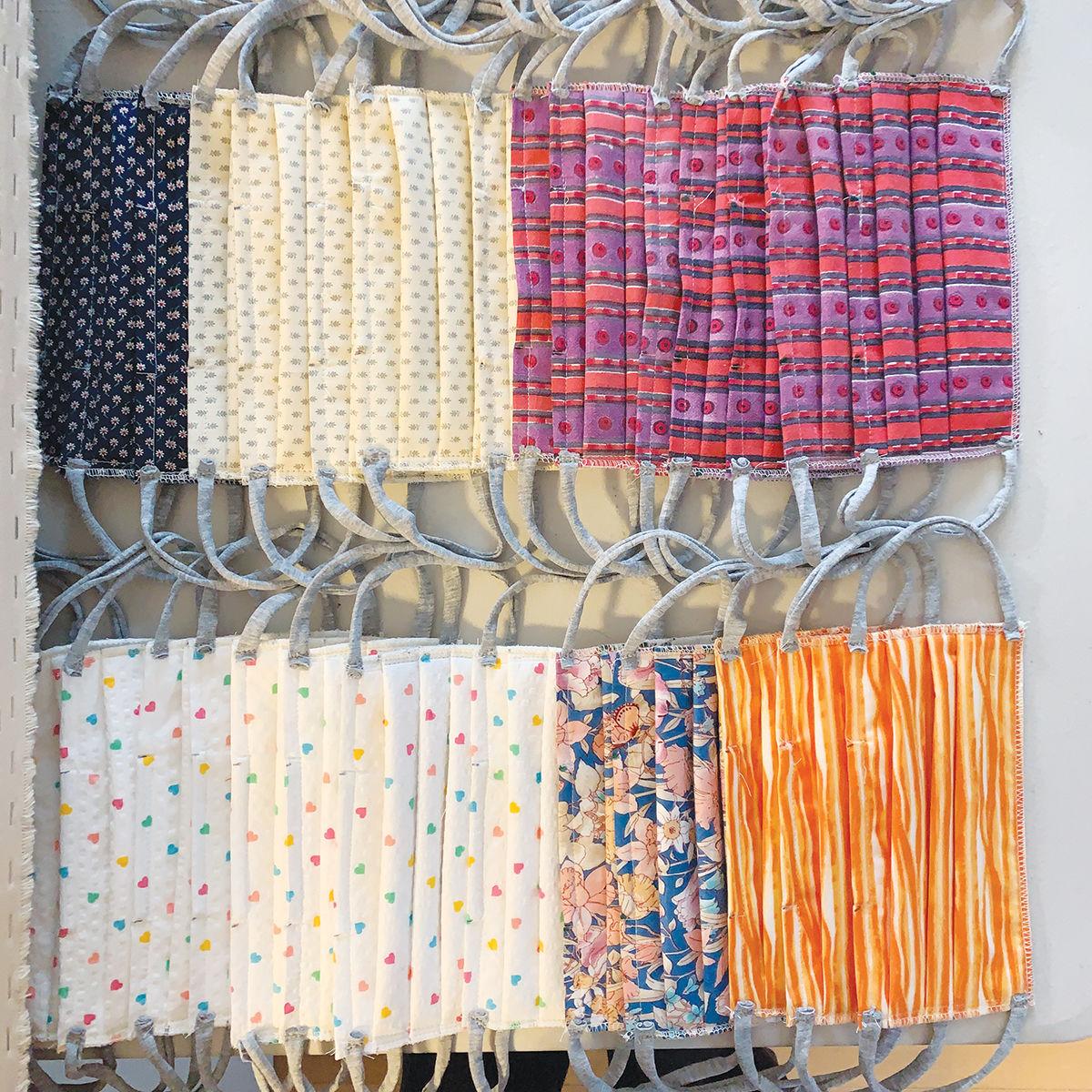 Mike Roussell, owner of The Tailor Shop in Stowe, sews handmade face masks at this home in Craftsbury.

Sean McGonagill, with Andi the dog, shows off face masks made by his mother-in-law Nancy Small.

Mask-maker Nancy Small of Stowe shows off one of her masks in a selfie.

Bruce Wayne wouldn’t have the iconic Batman suit and those wonderful toys he needs to fight crime in Gotham City if it weren’t for his trusty butler, Alfred Pennyworth. And where would the Parr family — better known as The Incredibles — be without E, better known as Edna Mode, fashion designer for superheroes worldwide?

In the fight against the invisible enemy that is coronavirus, people like Alfred and Edna are popping up all over the place, with sewing kits and patterns, and fashioning face masks for nurses, doctors, EMTs, or anyone who needs to go to the store or tend to a vulnerable family member or friend.

“Now is the time for neighbors to be helping neighbors,” said Mike Roussell, a Craftsbury tailor who has been working around the clock with his family to make hundreds of homemade masks.

Soon enough, large companies might pivot toward making masks. For instance, Chanel announced this week it will help the supply chain in France, which is going through 40 million masks a week, The New York Times reports.

For now, though, many people holed up in houses in the Lamoille County area with sewing machines – maybe even just needle and thread — are cranking out cloth masks at rates ranging from a couple per hour to 100 a day.

Copley Hospital CEO Joe Woodin said the hospital this week received about 100 homemade masks. He expects an order of about 50,000 professionally manufactured surgical masks on Friday, which he thinks ought to handle Copley’s needs in the coming “tidal wave” of virus cases expected in America this month.

He suggested that people making masks turn their attention to other essential workers, such as first responders, meal deliverers, postal workers, grocery store cashiers and anyone who has to work around people.

Those are the people who are going to come up short, he said.

“We’ve had a great outpouring of generosity with people making these masks,” he said. “At this point, we’ve told people we’re in good shape.”

Roussell owns The Tailor Shop in Stowe, and his normal work involves repairing Gore-Tex jackets, making custom clothing, and fittings, says his daughter, Jodie. Now, those two and Mike’s wife, Lise, have turned their Craftsbury home into a production line for face masks.

Jodie said a study by Cambridge University after the H1N1 flu epidemic suggested that, of all the materials used in masks — such as T-shirts, pillowcases and tea towels — vacuum bags had the second-highest “filtration efficiency.” That was second to actual surgical masks.

In a call for people to donate bags, the family wrote that “fabric vacuum cleaner bags are made of melt-blown fabric. This is an extremely fine mesh of synthetic polymer fibers used for the critical inner filtration layer of masks, allowing the wearer to breathe while reducing the inflow of possibly infectious particles.”

So, the family crowd-sourced HEPA vacuum bags and people delivered hundreds of them, enough for the Roussells to start production — but only after the bags were quarantined for several days.

“Thank you to all the people who donated fabric and vacuum bags to support this effort,” said Lise.

The three-person team is able to produce about 100 masks a day, in both clamshell and pleated designs, with straps that go behind the ears or behind the head. Lise and Jodie do the fabric cutting, using patterns, and Mike does most of the sewing on his industrial-level machines.

Mike eschews the elastic bands that most masks have, whether homemade or professionally manufactured. For one, there’s an elastic shortage, and two, there have been reports of some nurses getting bloody ears from wearing masks all day, Jodie said.

Instead, their masks have straps made from stretch jersey yarn, which Jodie said makes for a more comfortable fit.

“We have three faces here, so we have a design that fits all three faces,” Jodie said.

The Roussells even recorded their process and produced a pair of step-by-step videos that they posted to The Tailor Shop’s YouTube channel — Lise models the clamshell mask and Mike the pleated version. The videos are clear, concise and easy to follow: bit.ly/mikemask.

As of Tuesday, the Roussells had made between 400 and 500 masks, and Jodie expects they’ll have 1,000 finished this weekend. Then, they intend to distribute them to first responders and essential businesses in Lamoille, Orleans and Caledonia counties.

Other people have been making cloth masks meant to be worn over the top of the hospital-grade N95 models. Woodin said these help slow the “burn-through” rate of the surgical masks by providing an additional layer of protection.

“They’ll go through a lot in a day,” said Morristown resident Elaine Fortin of her homemade masks, which she has already delivered to Copley. “They whip them off, and throw them right in the laundry.”

Fortin said she’s been sewing all her life. She’s also no stranger to pitching in in a crisis. She used to be in the Red Cross and traveled to places such as Sri Lanka to help out after a 2004 tsunami killed more than 30,000.

More recently, she led efforts to gather supplies to send to Australia after fires ravaged the continent.

“The innovations, even with the need for ventilators, people are coming up with homemade ideas, and that’s just great,” Fortin said.

Nancy Small of Stowe started asking people to donate material after a friend in Pennsylvania told her people were making and donating masks there.

“I grew up in a household where my mother and grandmother sewed everything, so I have the joy of sewing in me,” Small said.

She had her daughter’s sewing machine at the house, but didn’t have any fabric or elastic. Fabric is fairly abundant. The elastic has proved troublesome, since more and more people around the state, the nation and the world are starting to make masks to contribute to the effort.

Small hasn’t lived in Stowe very long, so she didn’t have a long list of people she could ask to donate material. At least, not face to face.

“It really got me thinking, what can I do? I’m sitting in here, all alone, in a community where I just bought my house two years ago,” Small said.

So, she put the word out on Front Porch Forum, as have other mask makers. And then she went to bed.

“I woke up the next morning, and my heart was racing. I was like oh my gosh, who are all these people,” she said of the 40 or so people who responded to her entreaty.

One of them tracked down the elusive elastic at a place in Montpelier, and Small ordered “yards and yards” of it. Small said Stowe Fabric and Yarn “has been really lovely” in donating all manner of fabric, from basic calicos and polka dots to puppy dogs and kittens, farm scenes, “everything, all over the map.”

She was able to find patterns and sewing instructions on the Dartmouth-Hitchcock Medical Center website.

Some parents Small has communicated with say they’re going to incorporate mask-making into their home-schooling curriculum.

“My role has turned into sort of connecting people, which is funny, because I don’t know anybody,” Small said.

Roussell pointed out that the Centers for Disease Control and Prevention is contemplating a recommendation that everyone wear a mask when they go to the grocery store or the pharmacy.

The homemade masks are colorful and fun, a far cry from the sterile look of manufactured masks used by medical professionals and carpenters. If hospitals are good for now, the mask makers are ready to deliver their goods to whoever needs them. No one said a word about any exchange of money for them. They just need materials, and thus far the community has stepped up quickly and enthusiastically.

“It would be wonderful if we could take away the stigma of facemasks,” Small said. “Especially if they’re flashy and fun.”

Vermont “strongly discourages” incoming travel from coronavirus hotspots in the Northeast, Gov. Phil Scott said Monday, and directed all “none…