Skip to main content
You are the owner of this article.
Edit Article Add New Article
You have permission to edit this article.
Edit
Home
News
Sports
Opinion
Community
SCENE
Calendar
Special Publications
Marketplace
Classifieds
Contact Us
1 of 6 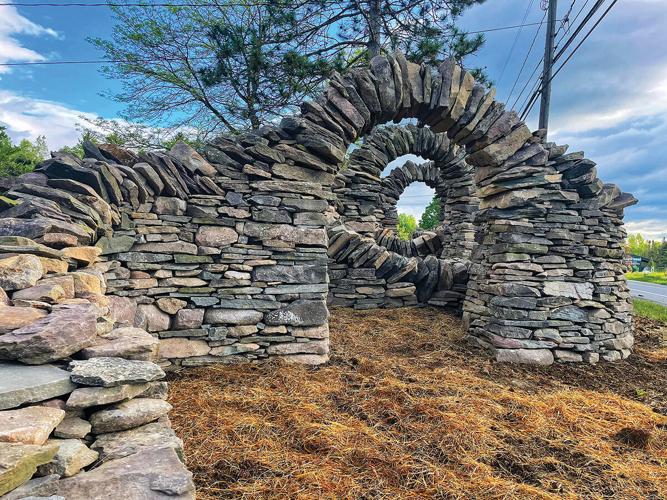 The new Phoenix Helix is there because the other one came crashing down at 7 a.m. on April 27 when a person asleep at the wheel of an Isuzu street sweeper crashed through it. 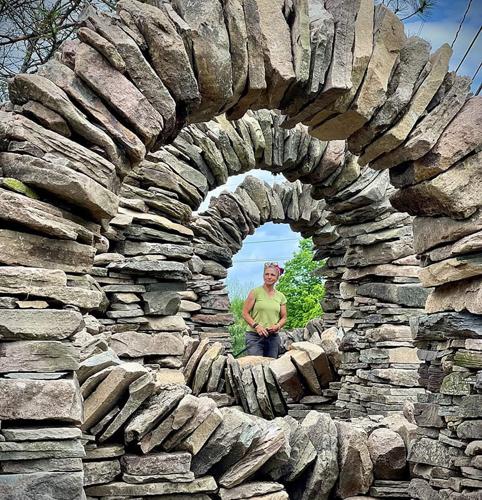 Artist Thea Alvin out side her home studio on Route 100 in Morristown with her new Phoenix Helix. The structure replaces one that was demolished by a vehicle earlier this spring. 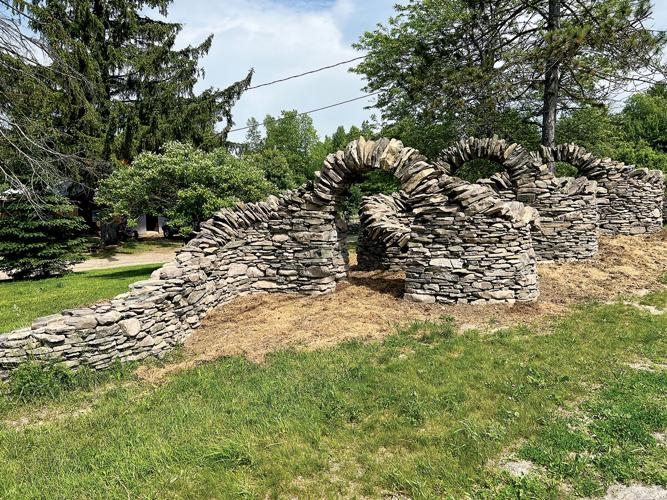 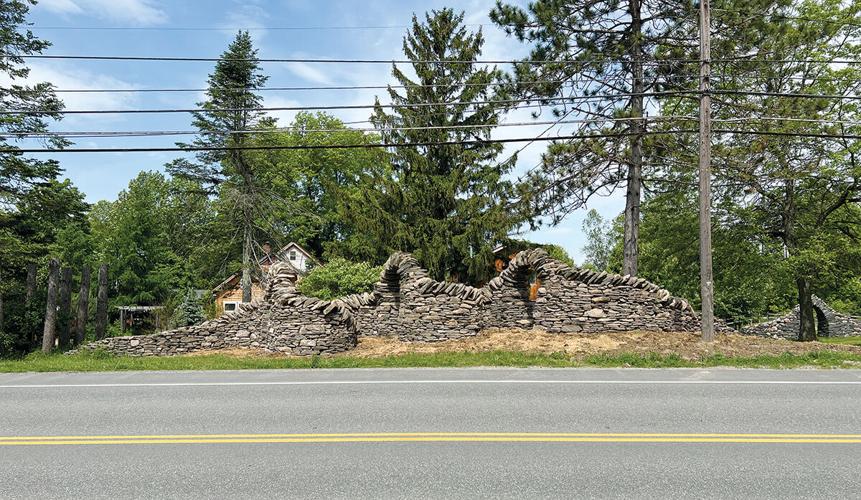 The bigger helix wall sits alongside Route 100, a showcase for MyEarthwork. 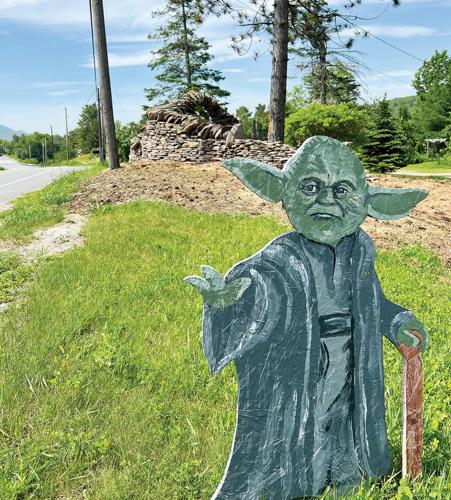 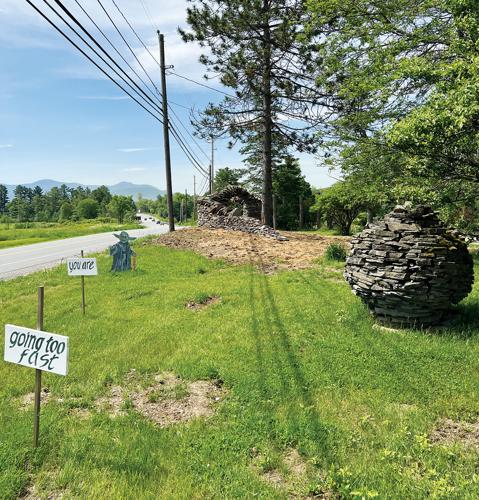 The new Phoenix Helix is there because the other one came crashing down at 7 a.m. on April 27 when a person asleep at the wheel of an Isuzu street sweeper crashed through it.

Artist Thea Alvin out side her home studio on Route 100 in Morristown with her new Phoenix Helix. The structure replaces one that was demolished by a vehicle earlier this spring.

The bigger helix wall sits alongside Route 100, a showcase for MyEarthwork.

A bigger helix wall sits alongside Route 100, a showcase for MyEarthwork, the home and gallery of Morrisville sculptor Thea Alvin.

The new Phoenix Helix is there because the other one came crashing down at 7 a.m. on April 27 when a person asleep at the wheel of an Isuzu street sweeper crashed through it. He’d been working all night and was tired. He was not injured, and apologized, and Alvin feels it was sincere. But that doesn’t undo what happened.

“It was a very important part of my identity as a sculptor, as an inventor — defiant and strong and a little insecure, a little imperfect, beautiful and steady and heavy and profound but also carefree,” she said. “When it was crashed into, it felt like my identity was broken.”

Alvin’s stonemason friends answered the call, coming from as far away as Ontario and Pennsylvania for the massive group build, and hundreds more people offered support or words of encouragement. They were able to get it built the week before Memorial Day, which is also Vermont’s Open Studio Weekend, a hugely important day for artists to have their work seen by road trippers all over the state.

“It was really fun. There were maybe 10 or 15 people on a couple of the big build days,” she said. “There were stonemasons, and then there were people who weren’t. One woman gave me a card and a $100 bill. Someone came and made pizza in the oven for everyone.”

Alvin doesn’t use mortar in her creations and instead uses dry stone construction techniques, which adhere to two of the most basic rules of physics: friction and gravity.

Essentially, the builder places the stones so they rub against each other the right way to keep them from sliding apart and places others on top to increase the gravitational pull and therefore increase that friction.

Alvin said her wall is even stronger than a mortar wall because mortar walls have discernible breaking points, where her stone walls are meant to let water run right through them, and to gently and constantly use those two rules of physics to remain upright. She said when road crews were resurfacing Route 100 last summer, she could feel the earth vibrating when the heavy machinery came by her home, and the original wall didn’t budge.

“It stays up because that’s the nature of the art,” she said. “Its nature is to shake and then set. It finds its own way.”

That is, until a commercial truck piloted by someone asleep at the wheel blasts through it, shattering and pulverizing the stones into shards and powder.

Alvin said the shrapnel hit the barn. She was outside with her puppy.

“My mom thought I got smushed,” she said. “It made a lot of noise. It was a huge, huge sound.”

So, yes, she was quite upset. And, yes, she’s quite ticked off that the insurance company is, at this point, offering $500 in recompense — the material alone for the new wall was $25,000, she said.

Her original wall was 20 years old and had been featured in numerous magazine and innumerable personal photos by people pulling over for a quick snap. Ten years ago, New York Times writer Michael Tortorello was driving along Route 100 while reporting on another story and saw the wall. It must have stuck in his memory, Alvin says, because he reached out a year later and profiled her for the newspaper.

She said the profile, with the centerpiece photo of her sitting in the middle of a stone circle she built at an Underhill retreat, got her lots of jobs, including a Duke University piece called “In Good Time,” and a long snaking wall on the site of the annual Bonnaroo Music and Arts Festival in Tennessee.

Oprah did a segment and featured her original wall in O Magazine, and even Stowe magazine got in on the action.

The old wall is still here, in a way.

There was little of the shattered remains of the original helix wall worth salvaging and reusing. It certainly couldn’t be used for any sort of structural integrity purposes — “I’m not building a risky structure,” she said — because it was so pulverized.

Rather than incorporate the old wall into anything load-bearing, she and her helpers placed some of the old stone into the core of the new piece. She said she has resisted using the word Phoenix in any of her previous works, for cliché purposes. But for this one, it made sense.

“It definitely hurts that the first one is gone, but this is a very visceral reminder that we are all going to die and that we are ephemera, which may not be a happy, fluffy takeaway,” she said, then paused. “The takeaway is, even if things crash, they can be remade.”