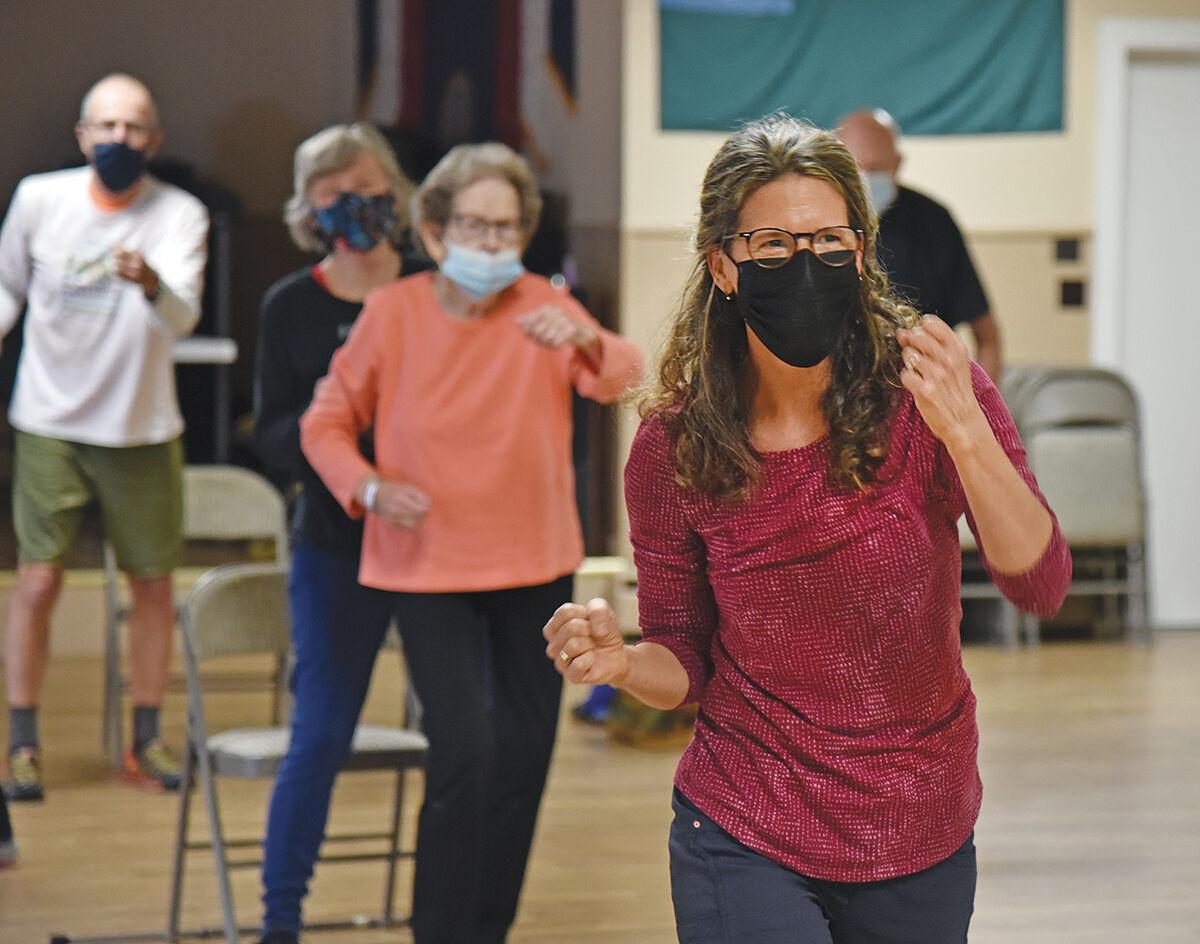 Trisha Riley leads members of a group that helps people living with Parkinson’s disease in a shadow boxing exercise at the VFW hall in Morrisville. 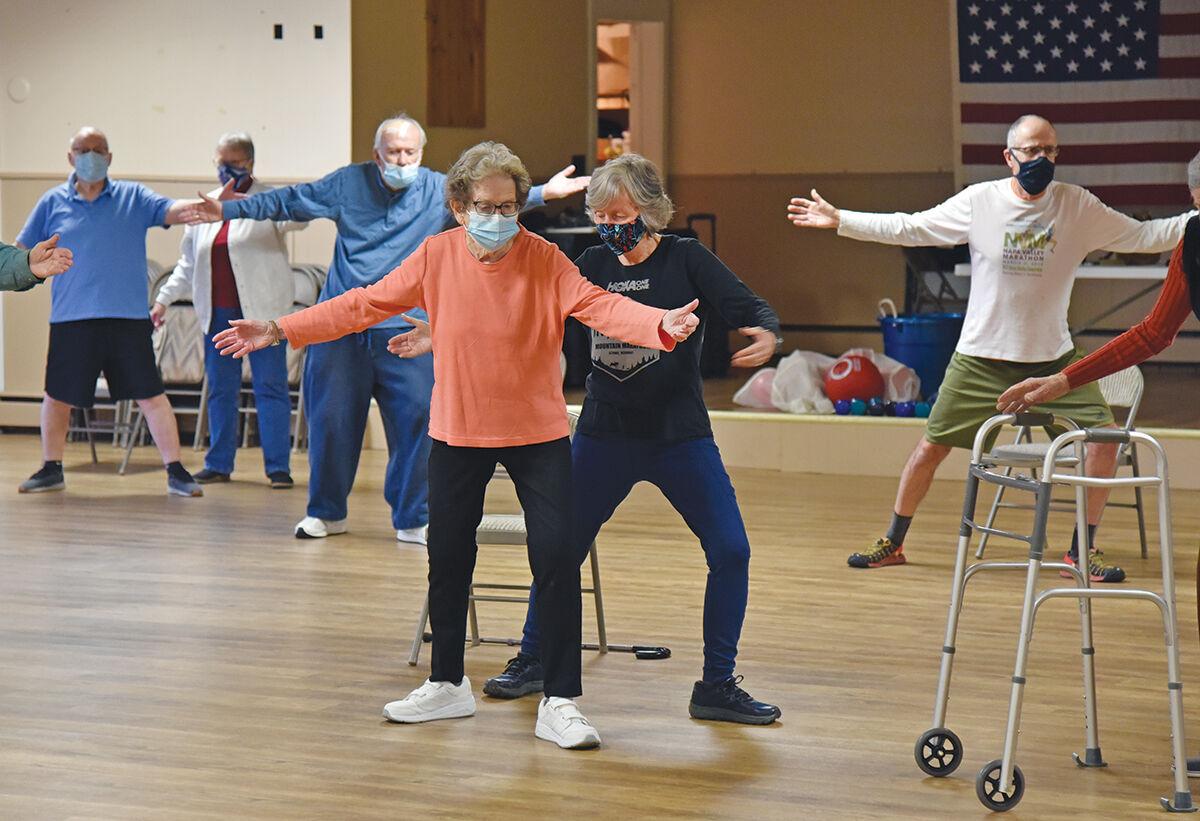 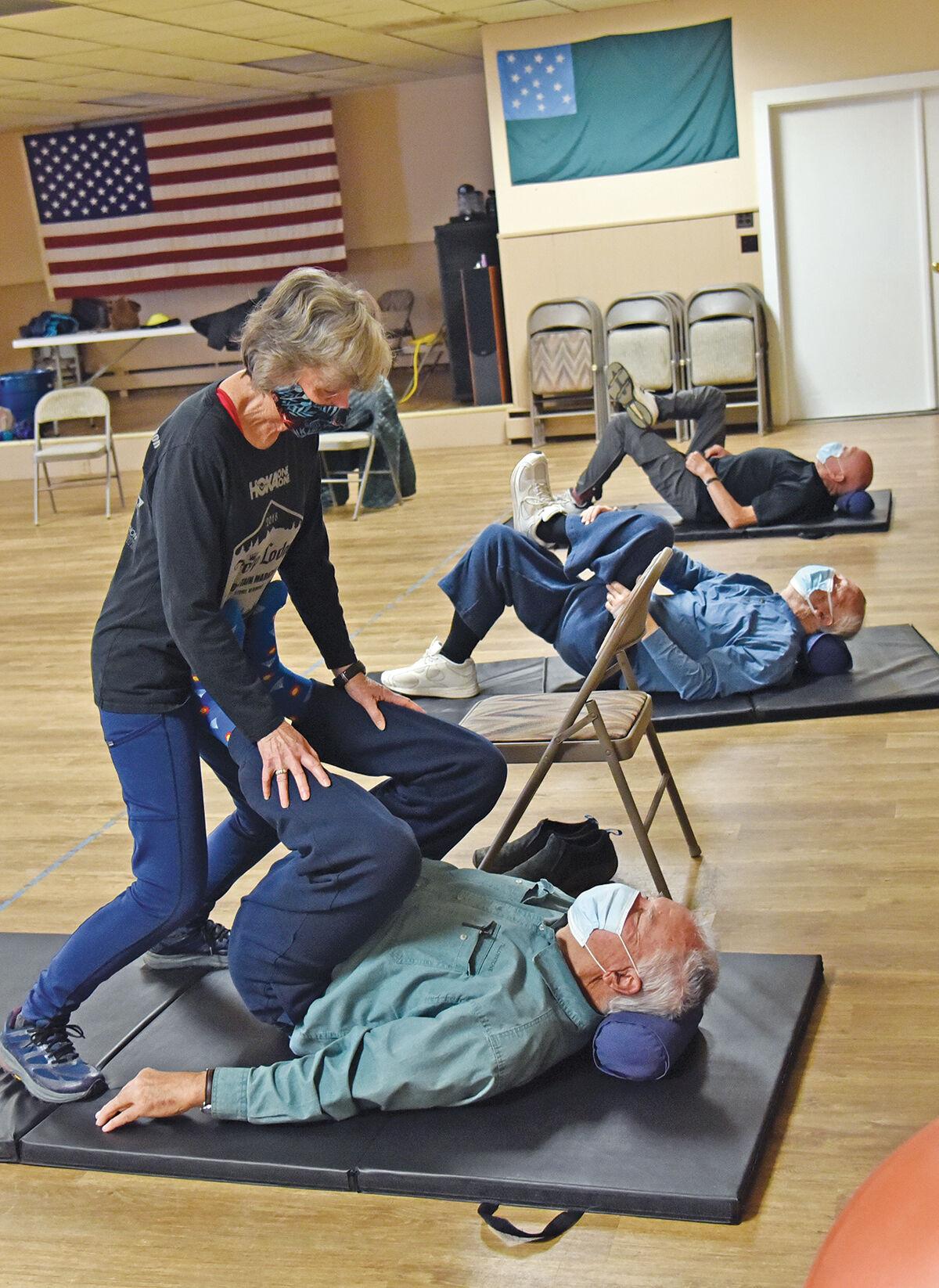 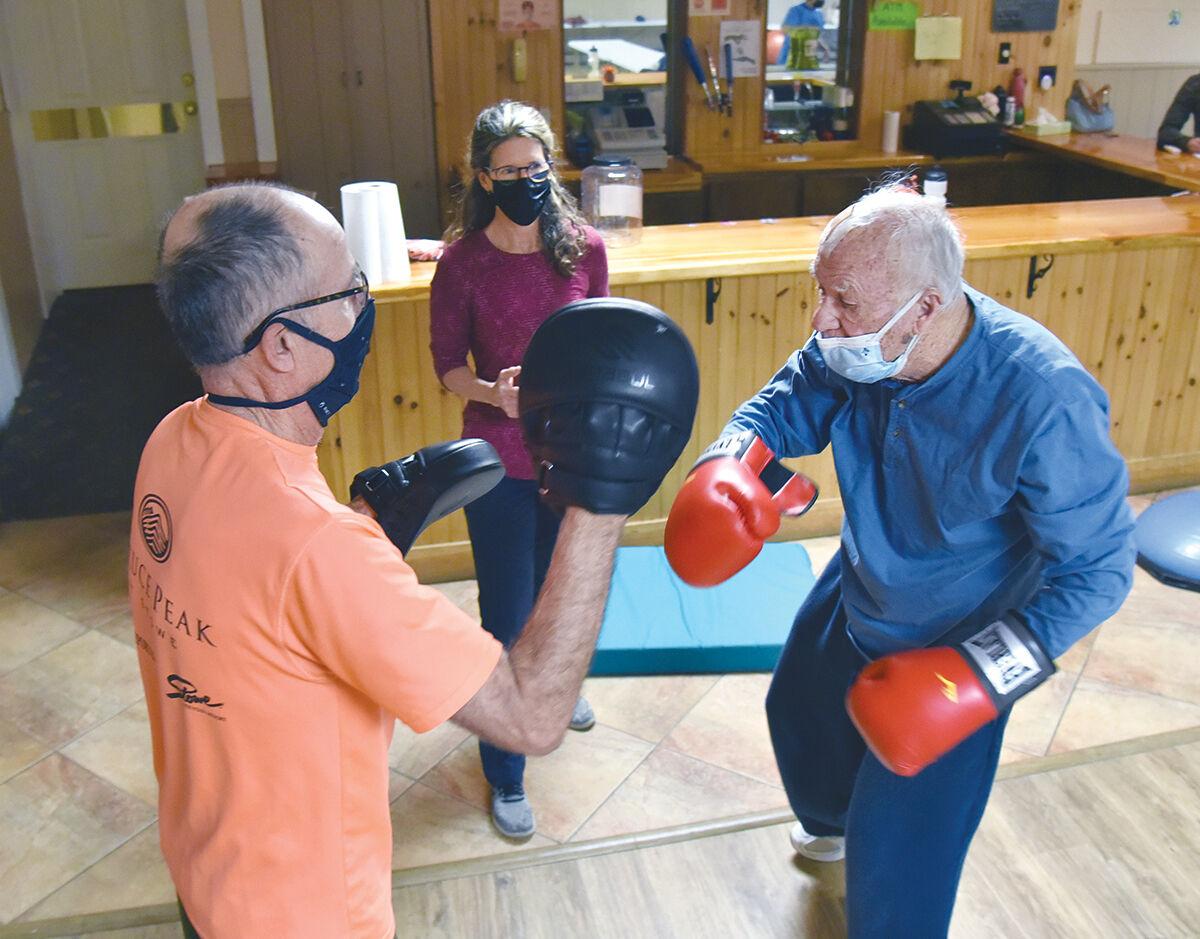 Paul Thabault of Stowe holds the sparring glove as Trisha Riley looks on during a boxing exercise that can help people with their extension and balance.

Trisha Riley leads members of a group that helps people living with Parkinson’s disease in a shadow boxing exercise at the VFW hall in Morrisville.

Paul Thabault of Stowe holds the sparring glove as Trisha Riley looks on during a boxing exercise that can help people with their extension and balance.

Joanne Rauscher called out to the group of eight men and women, all of them living with Parkinson’s disease, who are, in fact, taking big, exaggerated steps as Rauscher led them in a circle around the Morrisville Veterans of Foreign Wars hall recently.

Rauscher, a retired physical therapist, gathers a group for people living with Parkinson’s disease to exercise twice a week. Except for a six-month hiatus at the beginning of the coronavirus pandemic, the group has met for nearly three years.

Along with fellow retired physical therapist Trisha Riley, volunteers Linda Kelly, Cathy Snow, and Jane and Dwayne Sprague — and the group’s mascot, Rauscher’s dog Murphy, Rauscher has created an environment where aging Lamoille County residents living with Parkinson’s can fight back against their disease and find solace among others dealing with the same frustrating debilitations.

“At first, I thought it was all about the exercise. It’s not,” Rauscher said. “It’s also about the community. Once a month, everybody brings a sandwich, we stay after class and have a picnic. Everybody here is just really encouraging to each other. Somebody breaks through and does something and everybody claps. It’s just a real community.”

The exercise group was started after Rauscher realized the area provided little or no support for Parkinson’s patients. After using various locations in Morrisville in Stowe, the group finally found the perfect fit at the veterans hall, which Rauscher said has been very supportive.

Parkinson’s disease is a progressive nervous system disorder with effects that can vary. There are the trademark tremors, with different degrees of intensity, and muscles that stiffen over time that lead to restrictive and difficult movement.

There’s no known cure for Parkinson’s and its slow, ceaseless escalation can be tormenting. But as Rauscher’s group demonstrates, those diagnosed with the disease are far from helpless. Concerted work and exercise have proven to help mitigate the disease’s effects and allow those suffering from it some agency in their lives.

The session begins and ends with the passing around of a red rubber ball. This deceptively simple act involves each participant’s entire body. The catcher must stay on balance to receive the ball and extend muscles, not just in their arms but their torso and their legs as well, in order to throw it or bounce it to the next person.

“We’re trying to stretch out the muscles that Parkinson’s tends to make tight,” Rauscher said. “Parkinson’s people walk like their hamstrings are tight. It’s a question of if they want to do it, but they can. Then there’s balance, which is important, but it’s a function of a lot of things. Balance is a function of strength. It’s a function of your ability to move quickly. We do these things naturally.”

Rauscher led the group in stretches that engage different parts of the body. Participants moved their bodies in skiing motions, twisted from side-to-side, stretched their shoulders and gyrated their hips. Some exercises involved small weights.

Exercises included something for everyone in a group where no one person was affected by Parkinson’s in quite the same way.

Riley led the group in shadow-boxing exercises before group members donned gloves and took turns sparring with her or hitting a speed bag. Riley got the idea for this exercise after she read about a study that touted the benefits of boxing for Parkinson’s patients, the perfect form of exercise for someone working to both extend their body and stay on balance.

Some in the group worked out on the mats, striking different poses with the assistance of volunteers. Others kicked a ball between cones or walked across a balance beam. A few leaned against the veteran’s hall bar, extending their appendages one way and then the other.

Rauscher compared the movement of the body under Parkinson’s to walking across ice. Muscles are constricted and movement is slow. It takes concerted effort to extend the muscles, to stand up straight and to move in a straight line.

“This is the best group of people I’ve worked with in my life,” Jane Sprague said.

Within the small Parkinson’s group, some have pronounced tremors while others exhibit none. Some walk unencumbered while others need a walker or cane for support.

Still, the group exercise and community offer something for everyone.

Take Paul Thabault, for example. When the Stowe resident retired from Hope Lodge four years ago, he was diagnosed with Parkinson’s, a huge diagnosis for an active runner who had participated in 25 marathons in his life.

“I was a long-distance runner before this,” Thabault said. “So, I had a little depression going into that, because I couldn’t do that anymore. This exercise class helps me out. You feel down sometimes, but then you come here, and you see other people who have more struggles than you do who are working to stay fit.”

Thabault remains a frequent golfer and enthusiastically participates in the boxing portion of the exercises while working to improve his hip movement.

Ethel Merwin, another Stowe resident, received her Parkinson’s diagnosis seven years ago and was one of the earliest members of the group.

“It keeps you remembering, that’s very important,” Merwin said, “but it’s the camaraderie with the people here too. It’s nice to be with other people who were in the same predicament, as I’m in.”

Merwin carpools with others to the biweekly exercise sessions and described the group as a community that extends beyond the walls of the veterans hall.

“We support each other when we’re feeling down and low. I recently took a class, because my speech is going, so I need to learn to talk louder and clearer with intent. I give lessons to the other two in the car sometimes. So, we do our speech exercises, and we have fun and we’re there for each other.”

The Parkinson’s exercise group in Morrisville welcomes new members and invites anyone with a Parkinson’s disease diagnosis to join them.

The group meets Mondays and Thursdays in the Veterans of Foreign Wars hall in Morrisville at 10:30 a.m. Contact Joanne Rauscher at 802-917-2697 for more information.