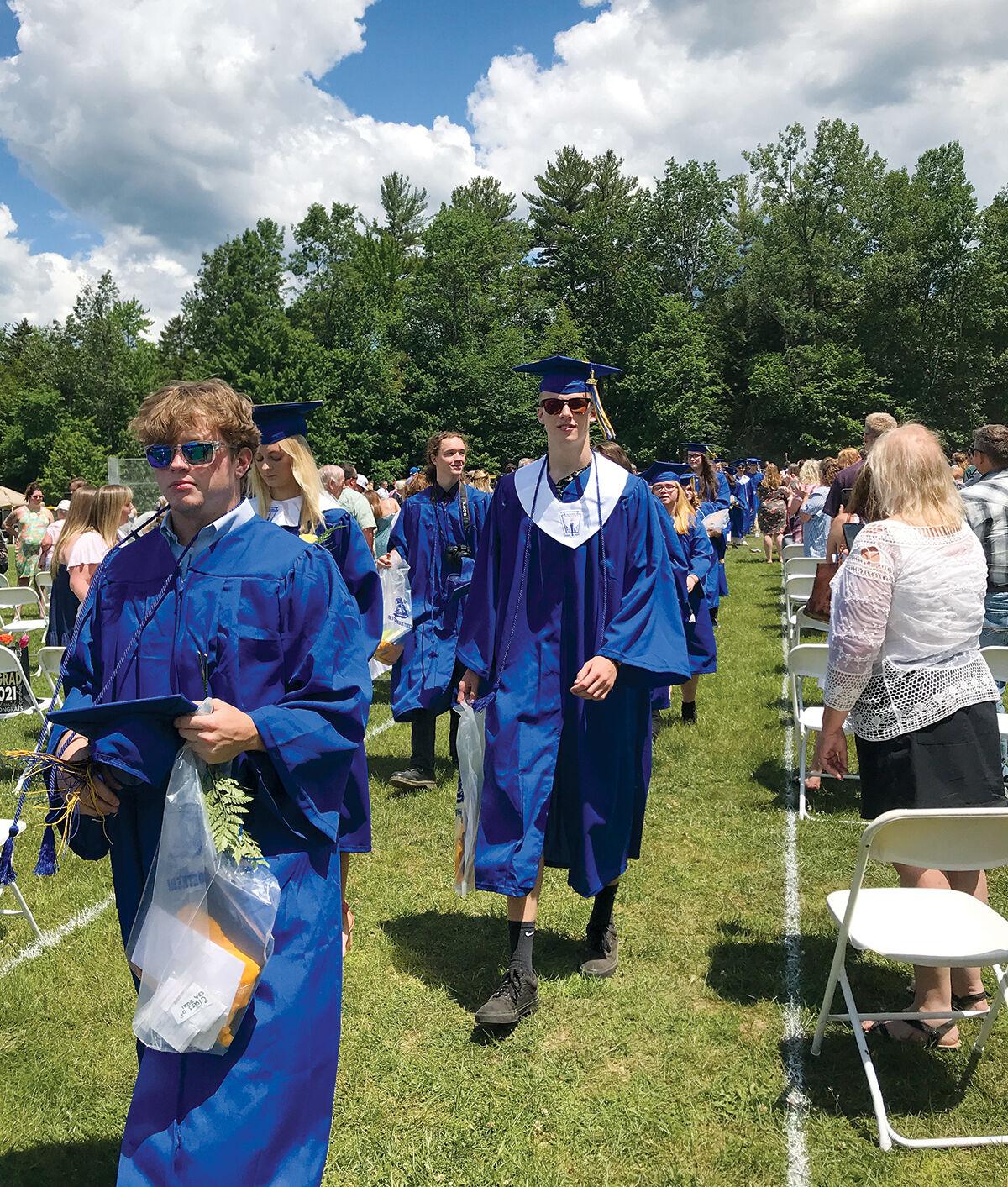 The newly minted class of 2021 exits high school and enters the real world. 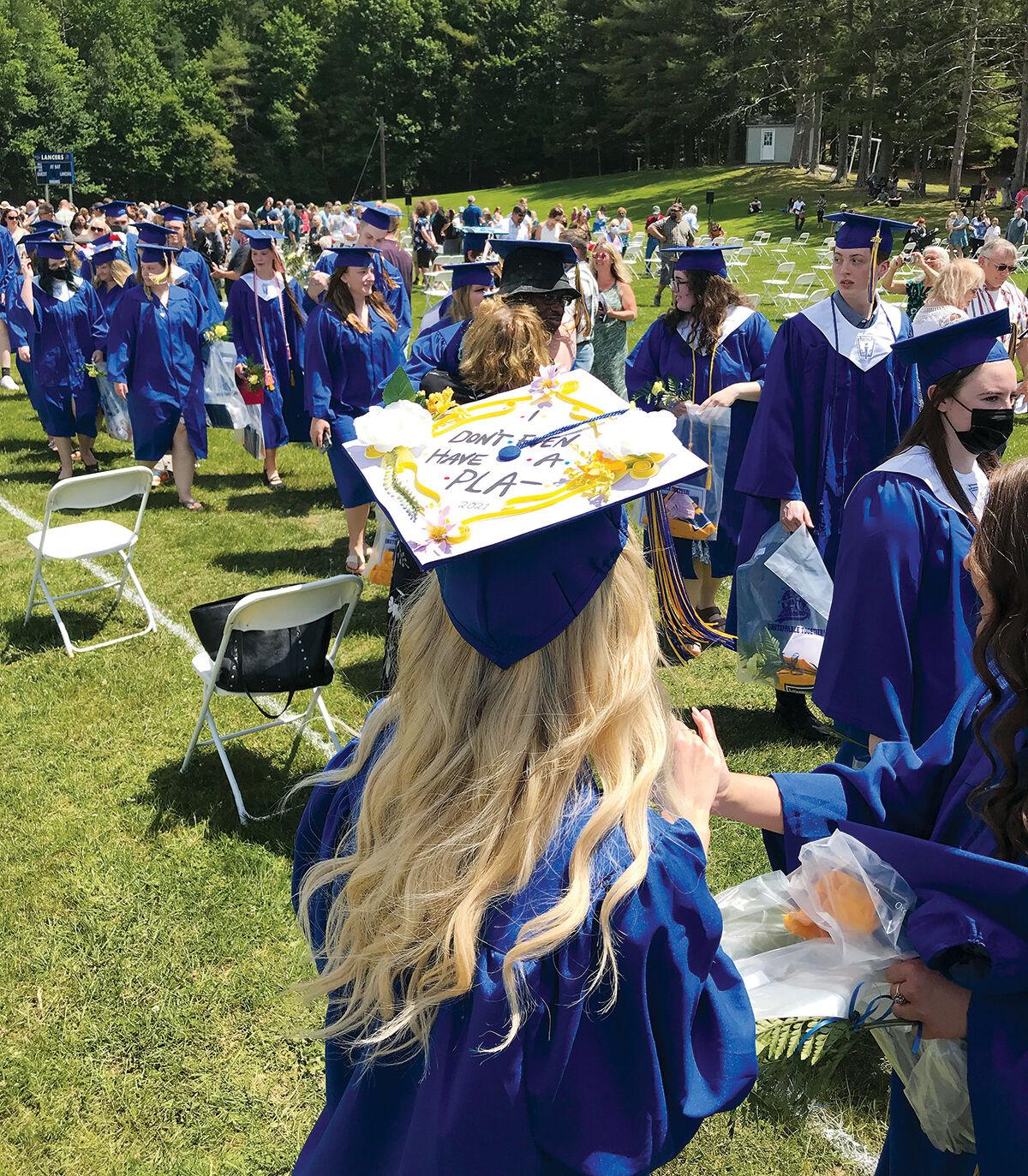 Colorful caps with messages — some inspirational, some humorous — adorned many a grad’s head. 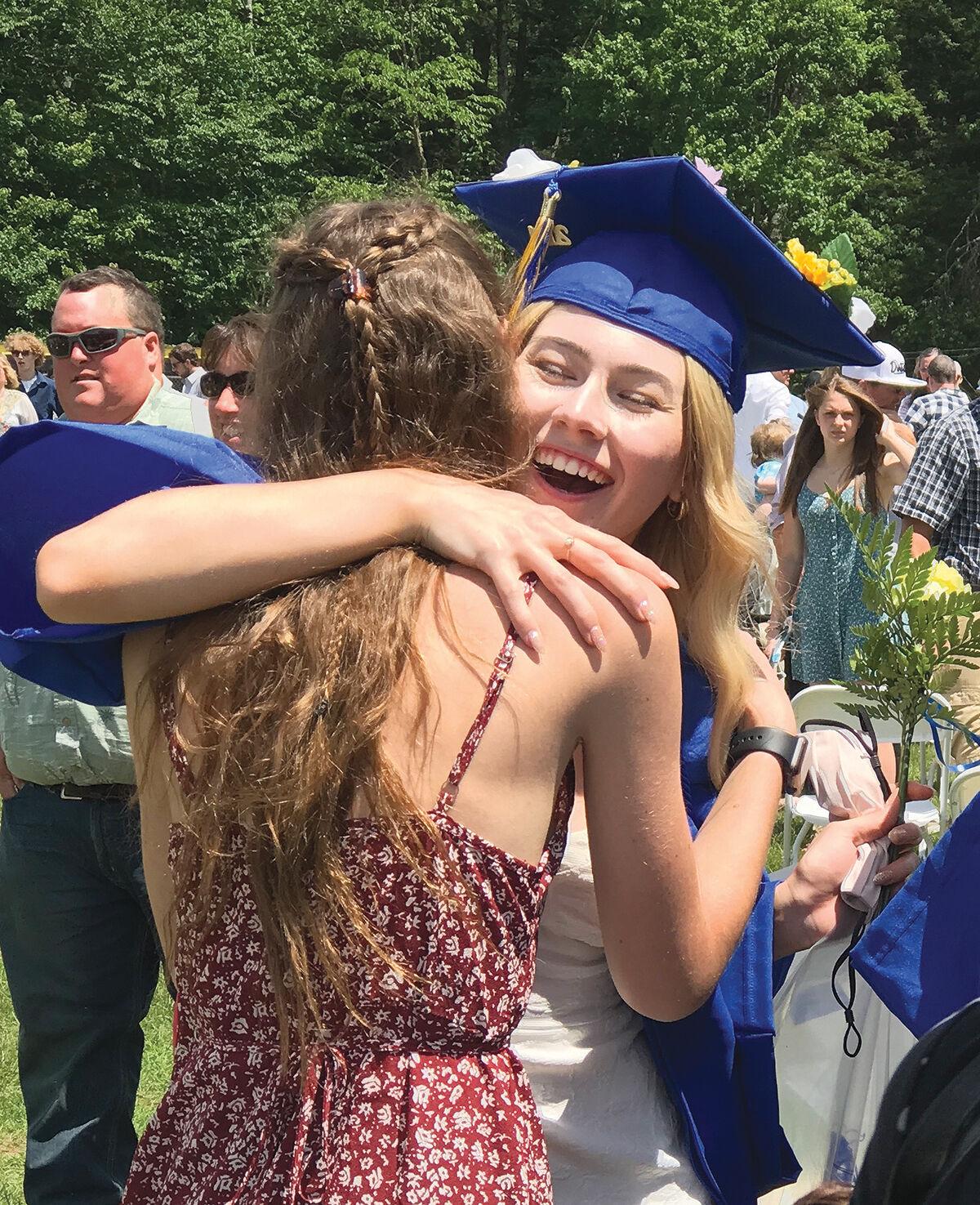 Offering congratulations were the order of the day. 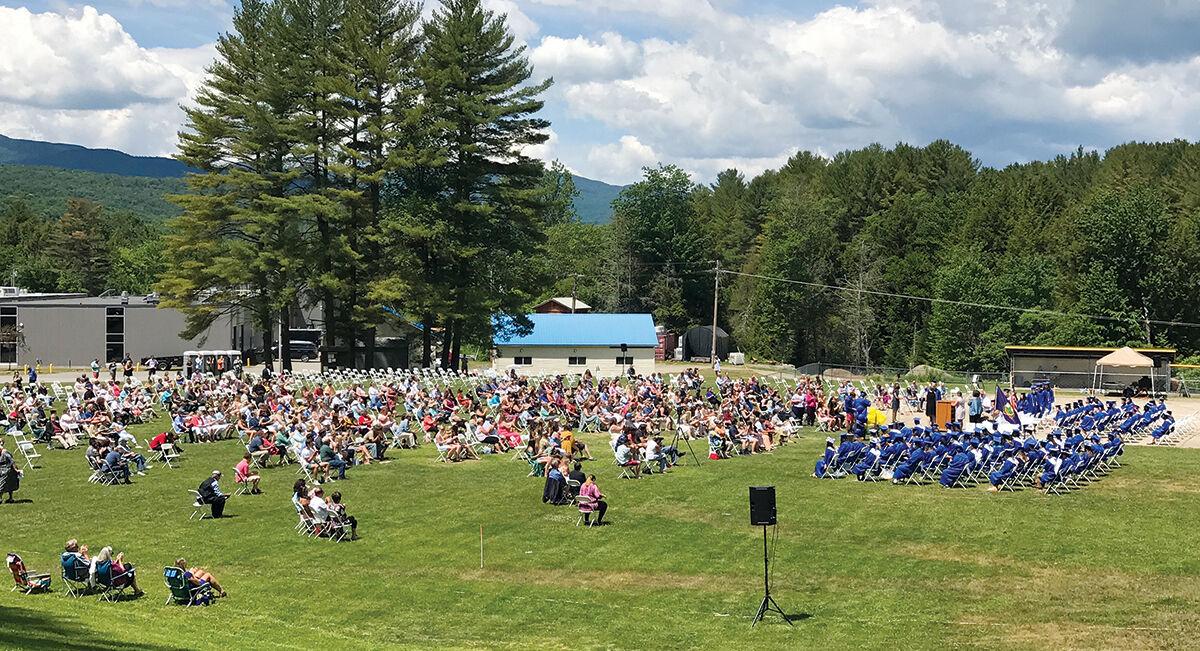 The Lamoille Union High School class of 2021 graduated under mostly sunny skies Saturday, with friends and family spread far and wide on the school’s athletic fields. 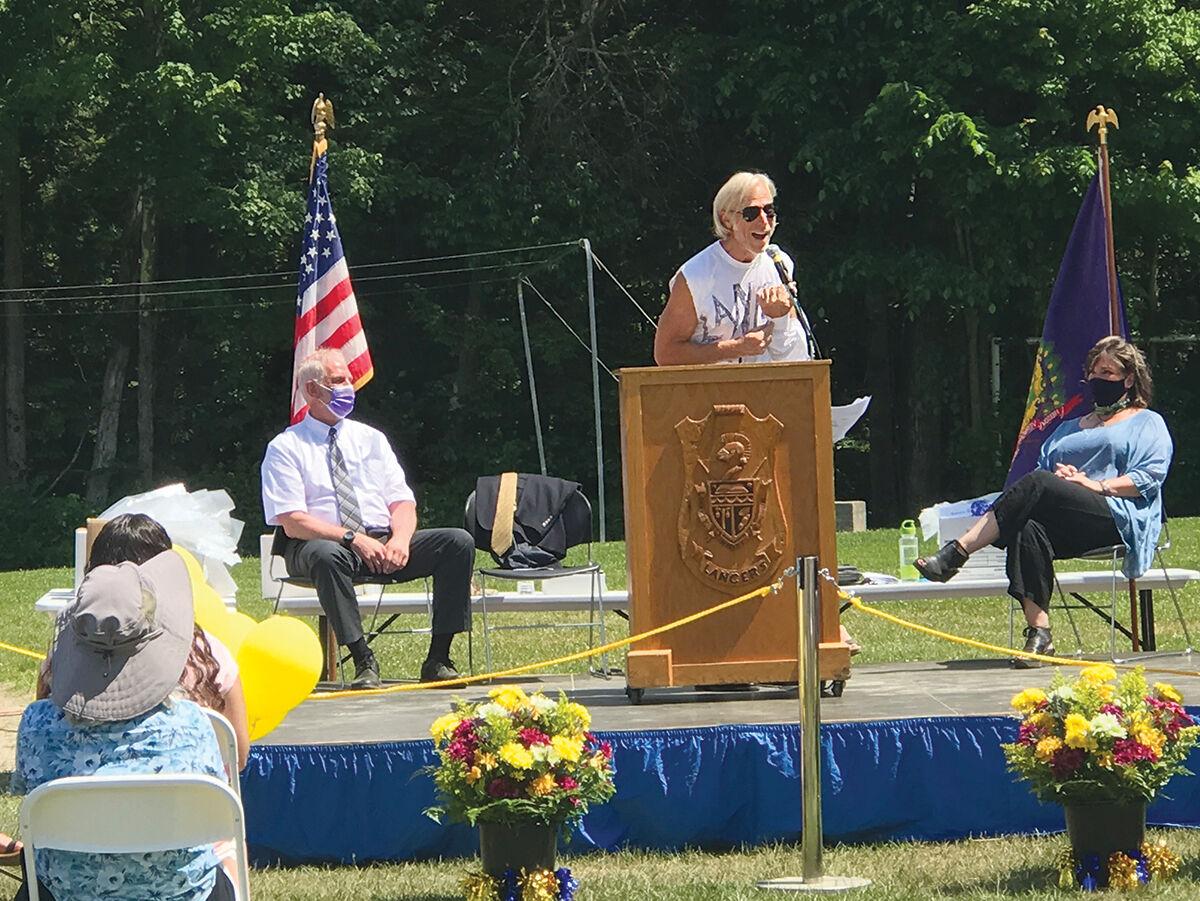 Lamoille’s keynote graduation speaker, Rusty Dewees, said it’s more important to be comfortable when giving a speech than it is to wear a coat and tie. So, he stripped to his homemade Lancer’s shirt and regaled, roasted and revered the seniors.

The newly minted class of 2021 exits high school and enters the real world.

Colorful caps with messages — some inspirational, some humorous — adorned many a grad’s head.

Offering congratulations were the order of the day.

The Lamoille Union High School class of 2021 graduated under mostly sunny skies Saturday, with friends and family spread far and wide on the school’s athletic fields.

Lamoille’s keynote graduation speaker, Rusty Dewees, said it’s more important to be comfortable when giving a speech than it is to wear a coat and tie. So, he stripped to his homemade Lancer’s shirt and regaled, roasted and revered the seniors.

Lamoille Union High School’s 2021 graduation addressed the diversity of a county-wide student body and the adversity of dealing with a global pandemic, told in tones both empathetic and comedic.

The ceremony was held Saturday, June 12, on the school’s athletic fields.

As a union school, Lamoille brings students in from six different towns with sometimes very different identities that can’t help but instill themselves into students. Valedictorian Erubey Lopez referenced this disparate diversity of norms in his speech, noting, however, that there’s one thing that every one of his classmates have in common: proficiency-based learning.

Oh, and a global pandemic.

“The string that binds us, the Lamoille Union High School class of 2021, and the graduating class of 2021 across the world, is perseverance,” Lopez said. “Perseverance in the face of adversity, change and struggle.”

He wasn’t completely kidding about that proficiency-based learning, though. The oft-maligned transition from hard and fast A-B-C-D-F grades to a type of report card that is viewed more as a blip on a learning continuum also required perseverance on the part of the students who were the unwitting subjects of the change. The class of 2021 is one of the first to graduate under the fairly new system.

Lopez said, however, that the new system allowed some students who might have struggled under the old grade system to flourish. And, the offerings at Lamoille allowed students more opportunities for learning than just tests and essays.

Often in valedictory speeches, the speaker seems to be talking to a select group of over-achievers. But Lopez kept his speech egalitarian, noting that many of the seniors on stage had to deal with plenty of personal and family issues, on top of juggling studies, while in the midst of a pandemic.

The keynote speaker was Rusty Dewees, the local actor, writer and comedian best known for his alter ego The Logger. Dewees had many in the audience belly-laughing at his antics and, likely, more than a few administrators squirming in their seats — Dewees specializes in a comedic style that manages to be both inspirational and blue-collar blue.

Riffing off of Lopez’s speech, Dewees asked for the senior with the class’s lowest GPA to come to the stage, and the student did, wearing a flannel face mask that delighted Dewees. Dewees said the smart kids are always getting the award and accolades, so he handed the senior, Angus Tomlinson, a $20 bill.

“And if you invest that wisely, maybe someday Erubey will be working for you,” Dewees said to a field full of laughter.

Dewees ticked off a bunch of advice for the young adults — will and discipline will trump talent any day of the week; don’t lie, even a little bit, because those things have a habit of catching up with you and become harder to quit; don’t worry about what others think of you, because, most of the time they aren’t thinking of you, anyway; and don’t over-medicate (stay away from the “dope gummies” was a leitmotif in the speech).

And so on, and so on. Anyone who’s caught Dewees’s shows knows it would be impossible to enumerate everything he said, so the best way to catch the speech, along with the entire graduation, is to view it online at bit.ly/luhs2021.

Gallagher said the pandemic is a “poignant reminder of how adversity can strike at a moment’s notice” and the students gathered in their blue robes and caps were a reminder of “how we handle such unexpected and uncertain events, and what we can do to impact positive change in our world is on our stage now, front and center, she said. “It may have been our job to inspire you, but the fact is, you have inspired us. You have shown us that you can do anything.”