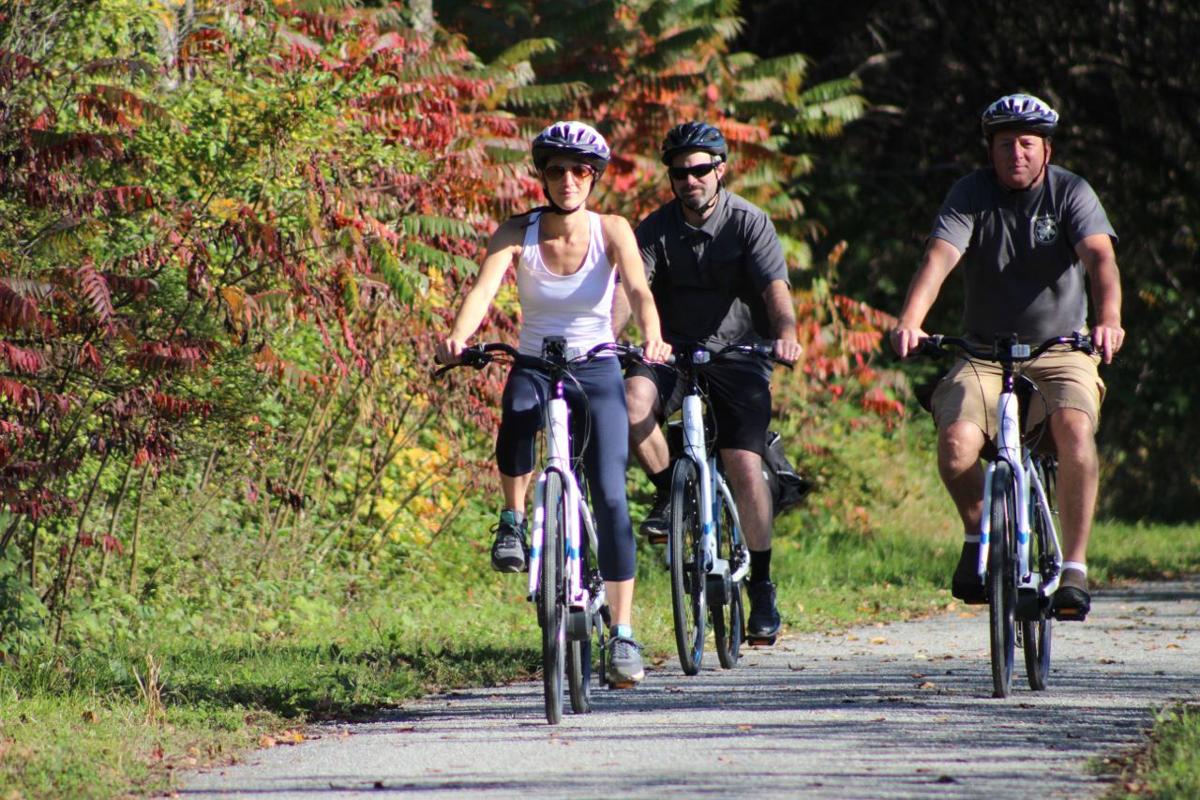 Jim and Yva Rose and Chuck Pepe take a spin down the Rail Trail in Hyde Park. 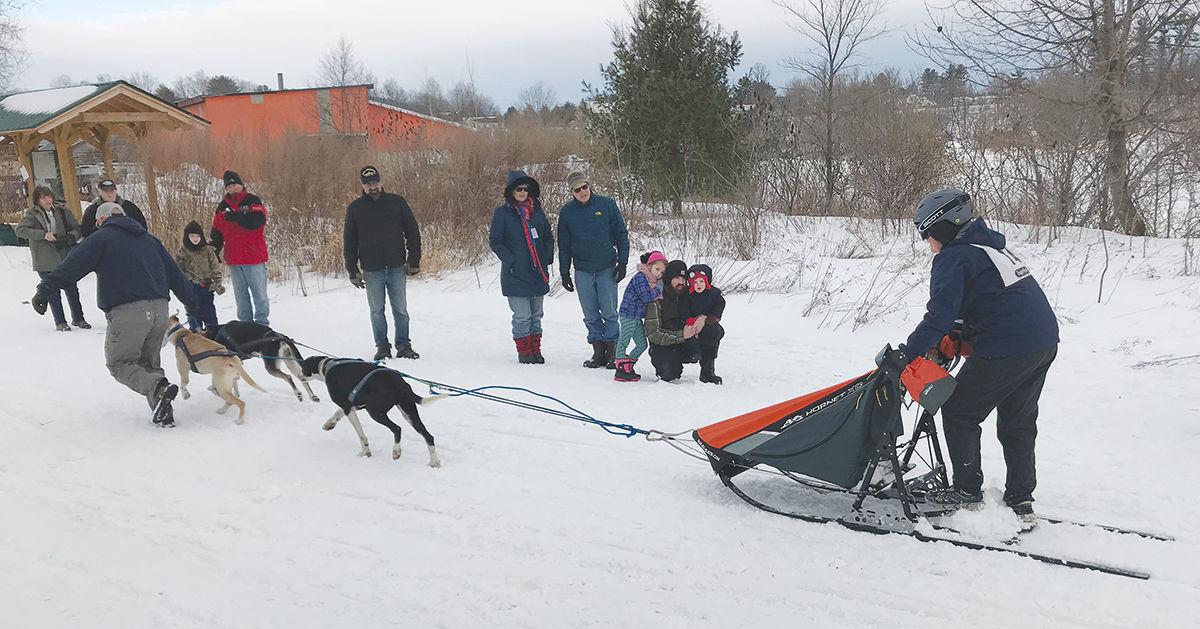 It was a three-dog morning for this sled dog team participating in the 2-mile portion of Saturday’s sled dog races along the Lamoille Valley Rail Trail in Morrisville. 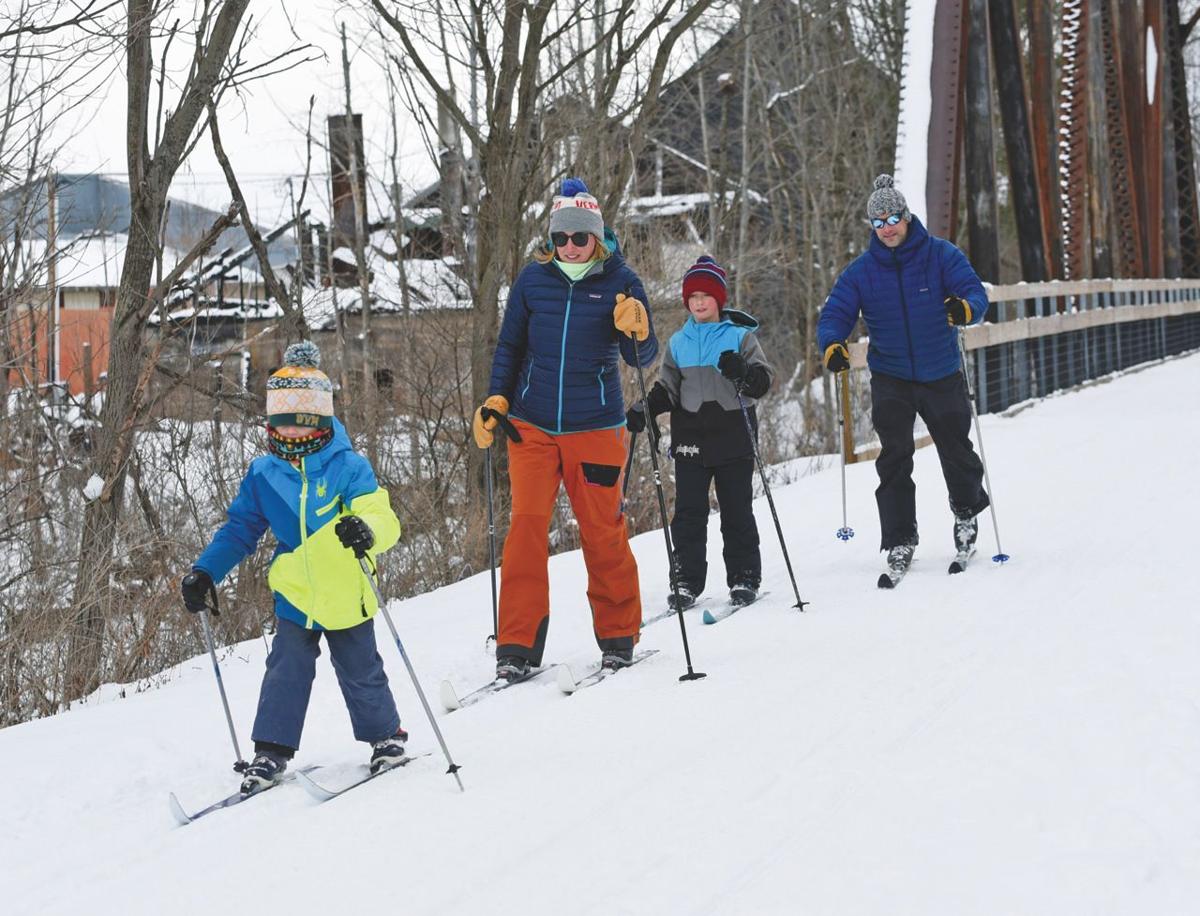 The Yablonski family from Wolcott takes a cross-country trek on the Lamoille Valley Rail Trail in Morrisville. 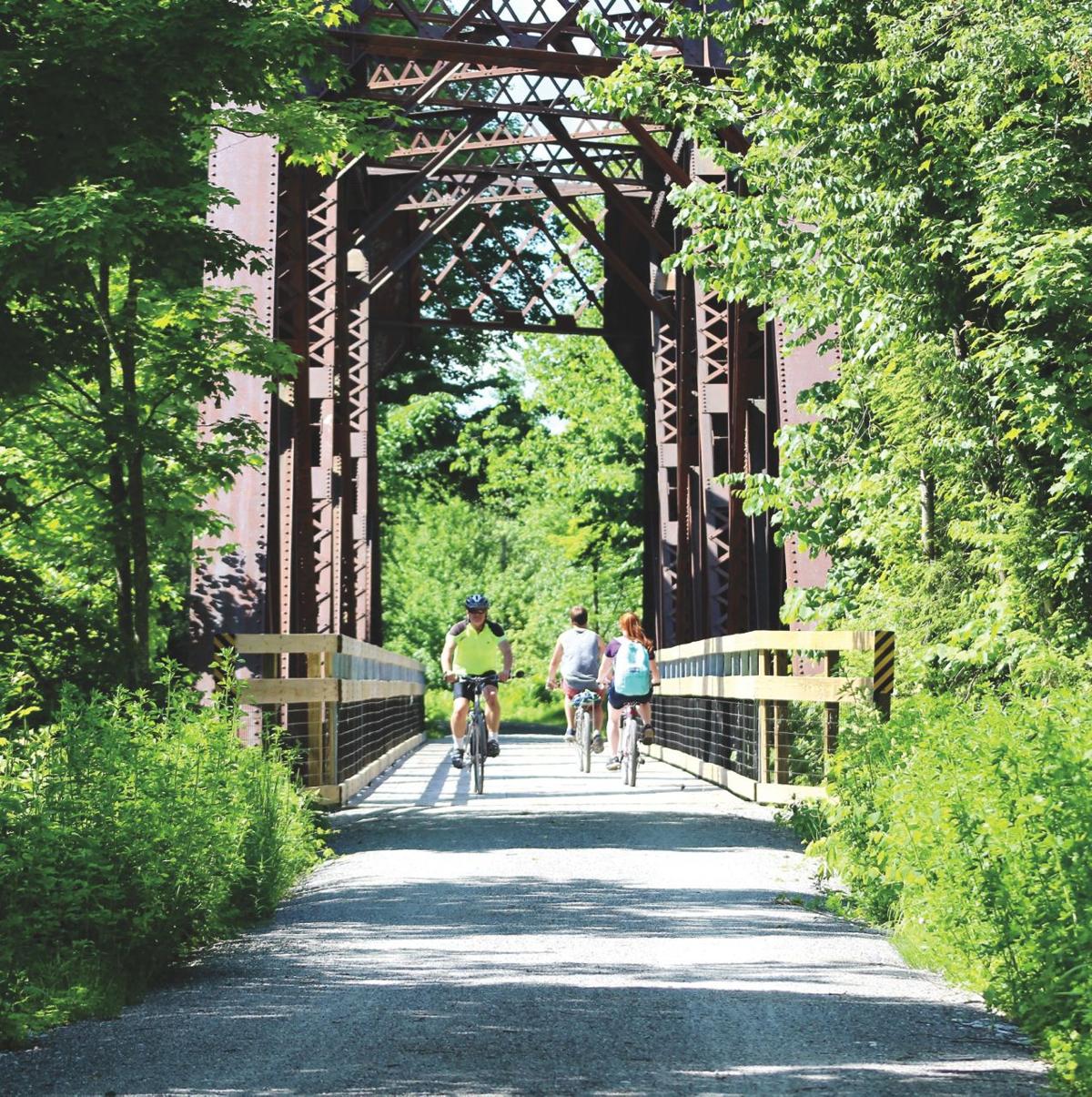 Bicyclists on the local stretch of the Lamoille Valley Rail Trail cross a former railroad bridge in Johnson.

Jim and Yva Rose and Chuck Pepe take a spin down the Rail Trail in Hyde Park.

It was a three-dog morning for this sled dog team participating in the 2-mile portion of Saturday’s sled dog races along the Lamoille Valley Rail Trail in Morrisville.

The Yablonski family from Wolcott takes a cross-country trek on the Lamoille Valley Rail Trail in Morrisville.

Bicyclists on the local stretch of the Lamoille Valley Rail Trail cross a former railroad bridge in Johnson.

Scott’s proposed budget, outlined Tuesday, calls for $2.8 million as part of a federal-state match that would leverage $11.3 million more in federal money to complete the trail across the top of the state, between St. Johnsbury and Swanton.

“This is a big deal for a region that feels disconnected,” Scott said in his budget address to the Legislature. “When complete, the activity it will create, along with cross-promotion, will strengthen businesses, economies and the quality of life in meaningful ways.”

The rail trail runs along what used to be the Lamoille Valley Railway, founded in 1877 and shut down in 1994. The Vermont Association of Snow Travelers, the organization that oversees snowmobiling, stepped up in 1997 to oversee conversion of the railway into a trail.

The total cost to finish the rail trail is estimated at $14.15 million, according to a fact sheet from the governor’s office. The $2.8 million from the state budget, along with the $11.3 million federal match, would be enough.

There are many challenges to completion, particularly between Morristown and Hardwick, where numerous bridges over the Lamoille River need to be fixed or rebuilt. And a small stretch near Greensboro has been long opposed by abutting property owners.

In the nearly five years that the Lamoille County section has been open, the trail has been used by cyclists, walkers, runners, Nordic skiers and snowmobilers.

“Lamoille County describes the LVRT as a win-win, with the creation of new businesses and enhancing the bottom line of existing ones,” the fact sheet states.

State Sen. Richard Westman, R-Cambridge, said towns along the trail have built facilities around it, or erected signs pointing to it.

Cambridge improved its Cambridge Junction trailhead with a playground that includes a miniature train, a nod to the past. Hyde Park improved and extended its village sidewalks to make walking to the Depot Street trailhead easier. Johnson has improved the recreation fields near it. Morristown has touted the economic aspects of the trail, with two popular restaurants located right alongside it parlaying the foot traffic into paying customers.

Westman said he has ridden his bike from his town to Lost Nation brewery in Morrisville a number of times. He said a former presiding judge making his Hyde Park circuit would regularly drive his car from his house in Burlington, park in Cambridge, then ride his bike from there to court and back at the end of the day.

Westman said even before the governor’s proposal, volunteers in trailside towns have worked to improve the trail, like a small group trying to raise money to extend it from Cambridge Junction to the Fletcher town line. Wolcott erected a new structure simply in anticipation of the trail being completed through there, he said.

“Put that all together and there will be a lot of excitement around this,” Westman said.

Michele Boomhower, the director of policy, planning, and intermodal development with the Vermont Agency of Transportation, said Tuesday she has been involved with making the 93-mile trail a reality for about 25 years, when the railroad tracks were still in place but no trains were running and ideas were being floated about what to do. She was director of the Lamoille County Planning Commission for a decade, between 1998 and 2008, which played a key role, along with the other northern regional planning commissions — the Northeastern Vermont Development Corp. and the Northwest Regional Planning Commission — in the trail’s early planning stages.

Boomhower said the trail, when completed, will be the longest rail trail in New England, but it will also connect to other recreation trail networks — the 26-mile Mississqoui Rail Trail and La Route Verte, a 2,100-mile cycling network in Quebec.

“Think of the opportunities that will bring,” Boomhower said. “I’m very excited. I think it’s a wonderful opportunity for that part of the state.”

Westman and Boomhower acknowledged that a governor’s budget is only a proposal, and the Legislature gets final say on where federal bike-pedestrian funds get allocated, if anywhere.

“I can’t tell you that, if I lived in Bennington or elsewhere in southern Vermont, I wouldn’t push back on this,” Westman said. “I think for those of us who live along the rail trail, we’ll be out to support this.”

The town of Highgate has the trail on its Town Meeting Day agenda, a resolution stating the town “strongly supports” completion by 2025.

As Scott noted in his address, the trail passes through 18 towns and villages in five counties “in some of the most rural parts of our state.” That’s a lot of senators and representatives, including Westman, who clerks the Senate Appropriations Committee, and Caledonia County Senator Jane Kitchel, who chairs that committee and clerks for the Transportation Committee.

Boomhower said she thinks legislators “have the best interests of the state at heart” when they consider investments that could benefit large regions of the state. And the Lamoille Valley Rail Trail, when and if completed, “will bring extensive economic opportunities” to the area.

Also, having the money earmarked could provide confidence to communities along the trail that they can start planning ways to incorporate the trail into their towns, the way Morristown, Hyde Park, Johnson and Cambridge have.

“If the Legislature embraces this approach, there will be a time frame committed to that they can count on,” Boomhower said. “This, in and of itself, is critical to planning around it.”

The Lamoille North school district will hold its annual meeting Monday, Feb. 17, at 7 p.m. at the Green Mountain Technology and Career Center in Hyde Park.

Café and sober living plan get backing in Johnson

The Johnson Select Board has unanimously backed a plan to renovate the Barrows House on Main Street, developed by Jenna’s Promise, a nonprofit group. The proposal is to reopen a coffeehouse downstairs with sober living bedrooms upstairs.

Farmers, artists, students get together for exhibit highlighting what agriculture means to Vermont

As leaf-peepers cruised Lamoille County last fall, soaking in Vermont’s glorious foliage, they could see small signs on the edges of fields that offer breathtaking vistas: “Thank our farmers for the view!”