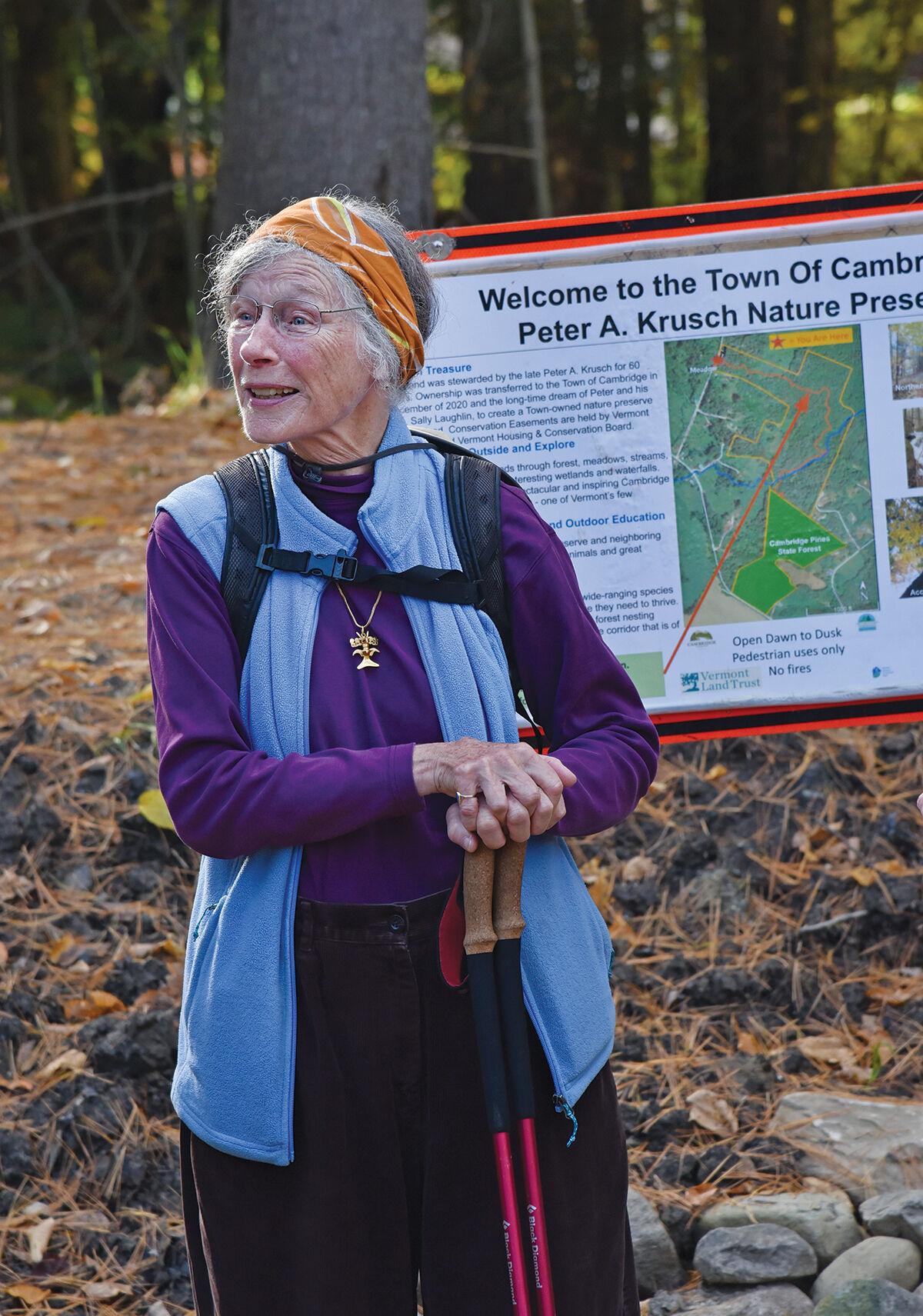 Sally Laughlin has stewarded the creation of the nature preserve named for her late husband. 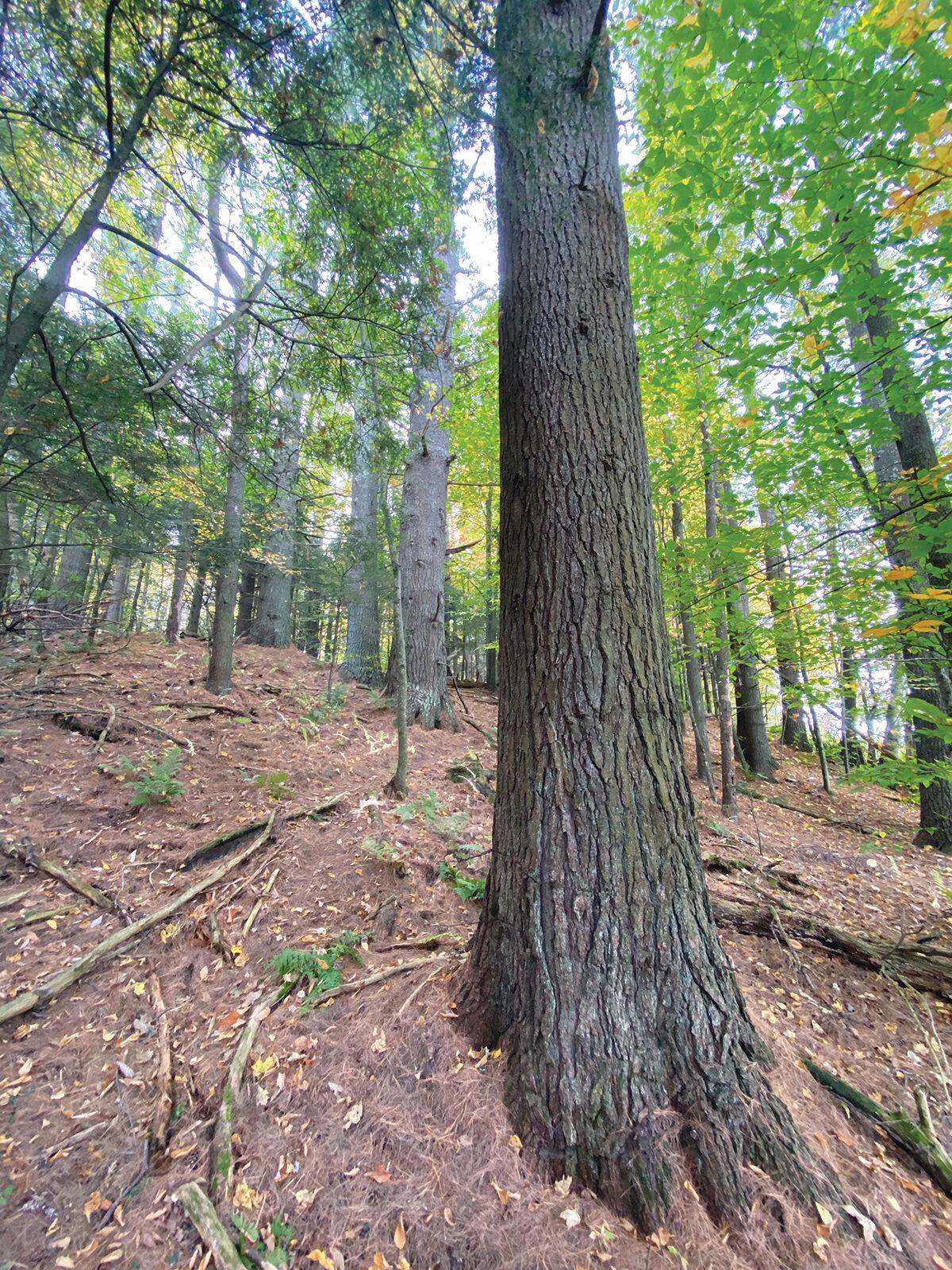 Old growth forest in the Peter A. Krusch Nature Preserve opened in Cambridge. 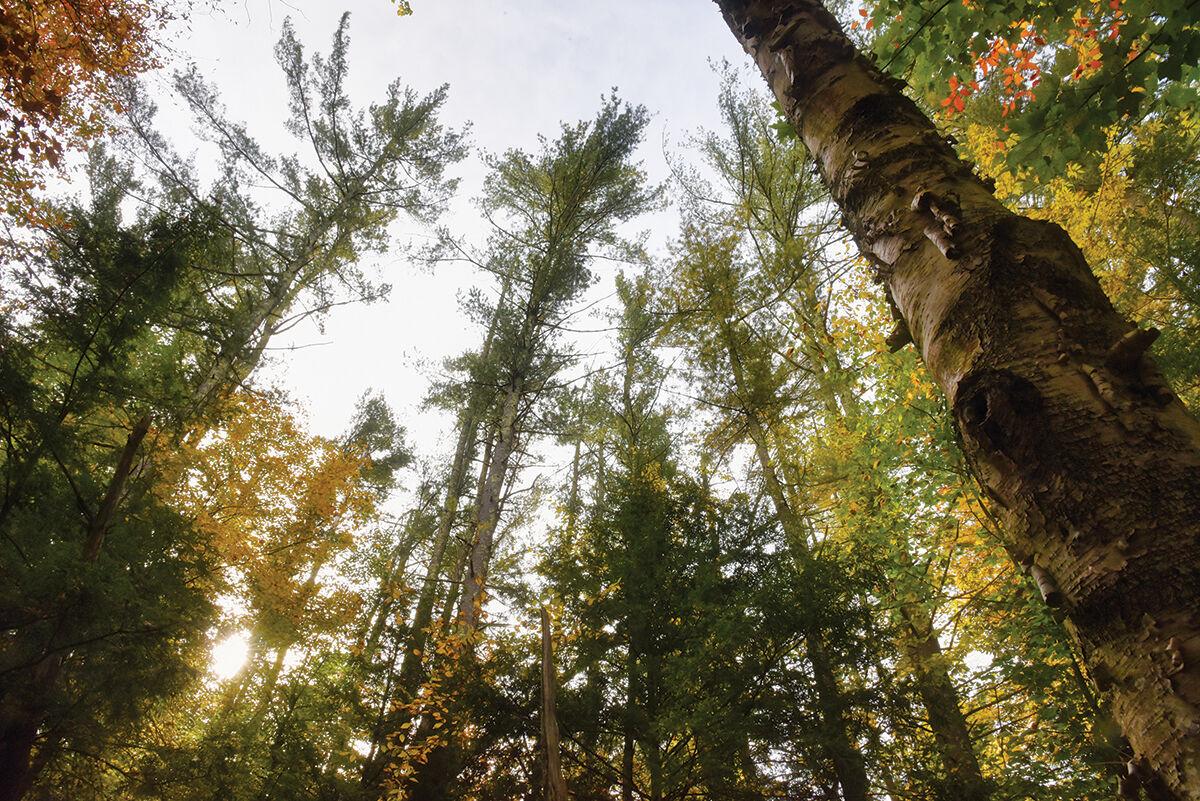 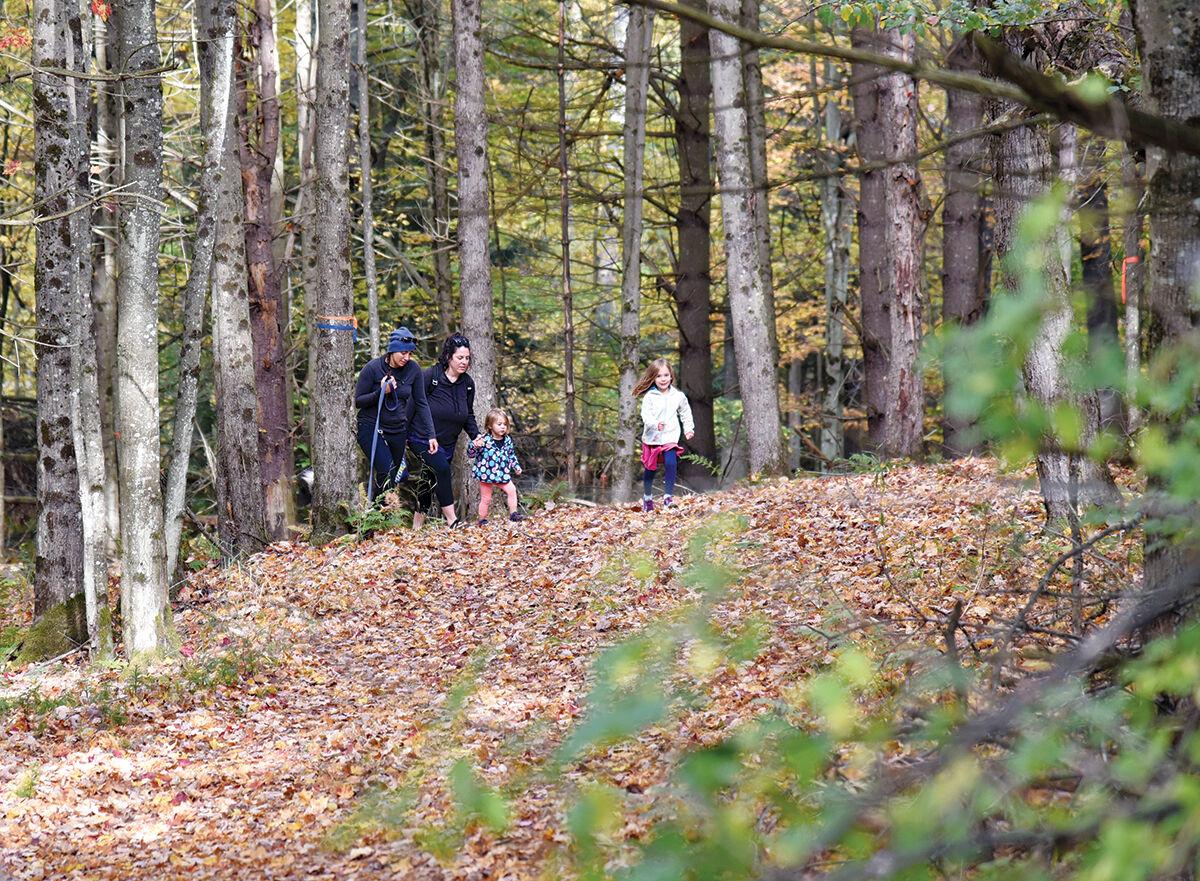 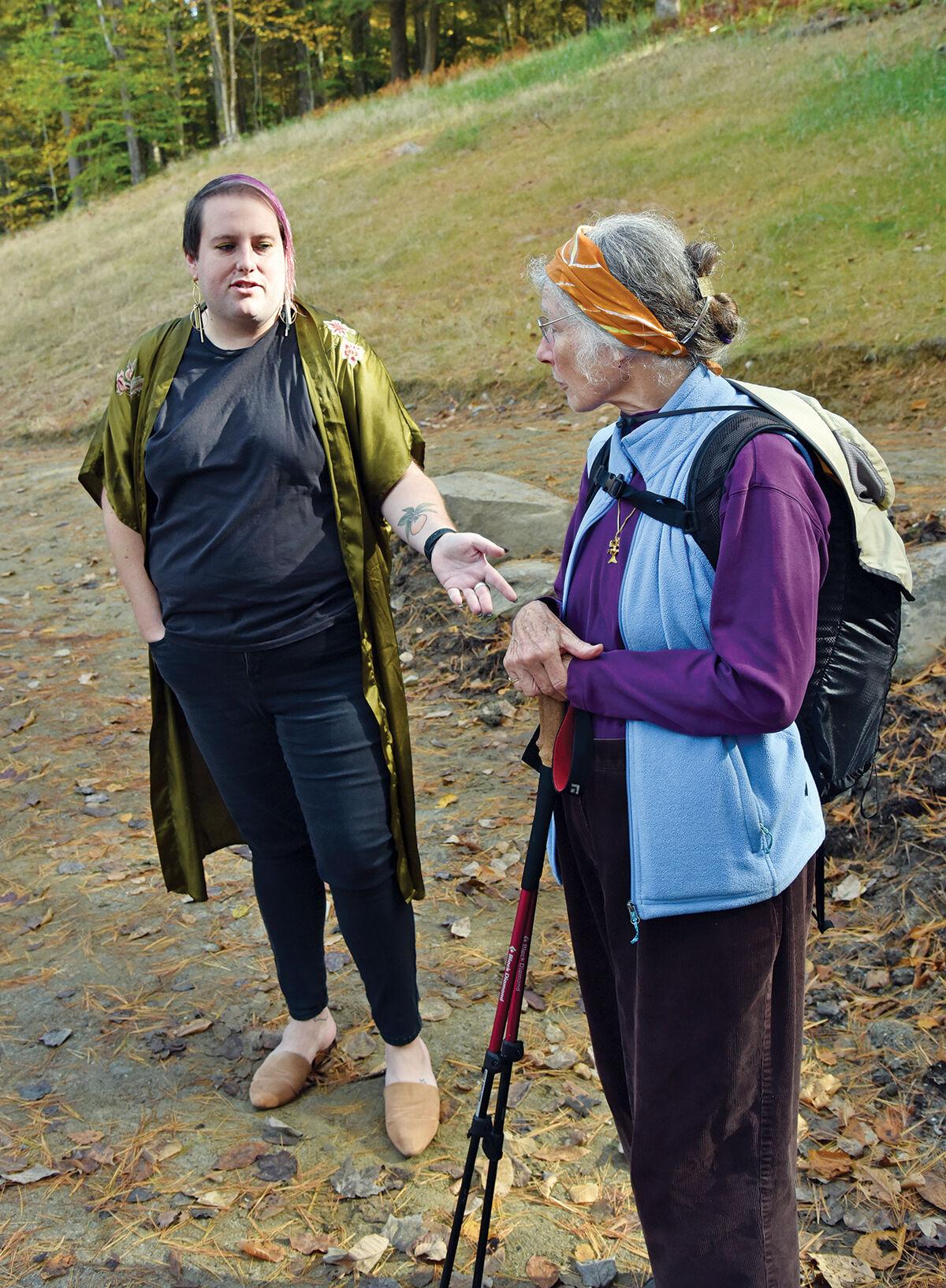 Sally Laughlin has stewarded the creation of the nature preserve named for her late husband.

Old growth forest in the Peter A. Krusch Nature Preserve opened in Cambridge.

The Peter A. Krusch Nature Preserve opened in Cambridge earlier this month, bringing a dynamic and tranquil piece of land to the public while expanding access to the Cambridge Pines State Forest.

Opening the 51-acre parcel of land was a lifelong dream for Krusch, who purchased the land in 1958 and died in 2018. His widow, Sally Laughlin, has stewarded the project to completion with a $50,000 grant from Vermont Department of Forests, Parks, and Recreation, the Cambridge Conservation Commission and numerous volunteers.

For the moment, visitors to the preserve can take a single trail that begins from a parking lot off North Cambridge Road and leads for nearly a mile through meadow and woodlands before descending into the adjoining state forest, which was previously difficult for the public to access.

Laughlin was well-suited to lead the opening of the preserve that has become her and her husband’s legacy. Not only does she have decades of familiarity with the land — she and Krusch married in 1992 — she was also the director of the Vermont Institute of Natural Science in Woodstock for 20 years prior to their meeting.

“His great dream was always to have the land be open to the public and have this beautiful land shared with the town,” Laughlin said. “One of the first things he said to me when we met on a blind date was, ‘I have this beautiful piece of land in Cambridge. Are you by any chance interested in that?’ So, I guess that worked out pretty well.”

A dream that started with Krusch’s purchase of the land 60 years ago took several steps toward reality in his lifetime, even though he did not live to see its full fruition. The development rights were given to the Vermont Land Trust in 2003, but it was only in 2017 when Krusch approached Justin Marsh, chair of the Cambridge Conservation Commission, that an active plan to preserve the land for the public was set in motion.

Laughlin still lives on land adjoining the preserve, in an idyllic home that Krusch built himself with wood harvested from the area. She also still maintains a grassy labyrinth just off the preserve’s trail, marked by an iron-wrought weathervane forged by Krusch, which she said encourages peace and healing.

Seeing the community out enjoying the land, as they did with trail guides and naturalists this past weekend, has made the long process worthwhile and honors the man who made it all possible.

“There were little kids about five years old and there were people even older than me with their walking sticks,” Laughlin said. “This is exactly what he wanted. If he just could have seen this. It made me so happy. It seemed like it was all worthwhile and everybody’s saying, ‘Oh, thank you for giving this land to the town,’ but I always say I’m happy to do it. It was Peter’s idea. Peter, who held onto the land through thick and thin for 60 years with the hope that it could be preserved and open to the public.”

The trail that takes visitors through the Krusch offers an impressive array of terrain and natural wonder and an impressive amount of work has been done on the trail already, even while certain parts remain unfinished.

Those who visit the preserve in October will find the ground thick with fallen leaves, crunching and swishing below their feet. Moss and ferns, some of which have already yellowed after light frosts, along with soft decaying stumps from trees logged over a hundred years ago cover the forest floor.

An initial belt of timber separates visitors from the world and invites them into a slower, calmer place. This empties into a brief meadow filled with cotton grass and monarch-attracting milkweed. From here, a few neighboring farmhouses can be seen, the last glimpse of the neighbors before the trail descends further into the preserve.

The forest is filled with towering white pines and hemlock. The roots of yellow birch trees can be seen above the ground, a process that occurs when they grow through rotting stumps. An ancient red maple visible from the trail has a crevice bored into it that Laughlin has seen porcupines and raccoons and even the occasional bat make into a home. The symmetrical holes made by yellow-bellied sapsuckers can be seen on the trunks of trees, which Laughlin said hummingbirds make use of after the birds depart.

A gradually descending trail leads up to a steep ravine and down to Dragon Brook below, a pleasant trickle on a dry fall day that can grow to a torrent in wetter times. Take the trail a little farther south and there’s a secluded waterfall that flows among sculpted shale bedrock.

New bridges now provide safe passage over sometimes temperamental creeks. Benches made from pieces of trees cut for the trail provide intermittent resting areas. A bridge that leads over Dragon Brook is blocked off for now; the southwestern section of the preserve is wetlands filled with massive ostrich ferns, among other flora, but it will require an entire wooden stepping path to be installed before the public is allowed in.

Despite the grade and the natural inaccessibility of the preserve, Laughlin said it was important to her that the land be as accessible as possible to those with limited mobility, with changes and considerations of how to sculpt the trails undertaken with this in mind.

In the end, the trail segues into the 22-acre old growth pine forest. This remarkable state park, while not containing truly pre-Columbian pines, is home to a forest that hasn’t been touched in over 200 years, probably not since the area was first settled in the late 18th or early 19th century.

A sign posted claims a possibly 300-year-old hemlock tree with a 51-inch diameter lives in the forest, though Laughlin has yet to locate it. A massive, naturally felled pine reveals the age and size of the old pines in a way the trees towering above cannot. Though much of Vermont was covered in forest this old or older, information posted in the state park claims less than 1 percent of it remains.

According to research Laughlin has done, a prescient Cambridge Cemetery Board owned the land and, instead of selling it to logging interests in 1940, sold it instead to the state in order to protect the area.

Though the Krusch preserve offers many delights, Laughlin’s favorite is a bit off the beaten path.

When Krusch purchased the land, there was an area just off his main homestead that was nothing but a sandblow, an area reduced to sandy soil and a small stand of pine trees.

Now, visitors to the area will find it covered in wild raspberry bushes and the tall grass from which Laughlin has sculpted her unicursal labyrinth. This region, even more than the rest of the area Krusch tended for so long, is a symbol of his devotion to maintaining and enriching the land.

Laughlin even described how her husband would place hay for his cows in order to strategically coordinate where the manure was dropped in order to encourage the reinvigoration of the sandblow. She’s hoping a trail can eventually loop around through the area, though the sand makes the task difficult.

Krusch grew up in New York City, the son of German immigrants who had come to the United States in the 1930s and returned to Germany at a nearly fatal moment as Hitler came to power. He and his family escaped persecution by a hair.

Krusch was an inventive and adventurous soul. After some time working in Alaska, he purchased the old hill farmland that would become his home and, eventually, the nature preserve. He employed various methods of farming for years and traveled abroad in Europe and Africa before becoming a sought-after blacksmith, known for ornate tools, weathervanes and dragon sculptures.

Laughlin and others working to develop the preserve are still looking to help continue the work that trail designer Erin Amadon of Towns4Trails plotted out.

The Peter A. Krusch Nature Preserve officially opens to the public Saturday, Oct. 2.