Skip to main content
You are the owner of this article.
Edit Article Add New Article
You have permission to edit this article.
Edit
Home
News
Sports
Opinion
Community
SCENE
Calendar
Special Publications
Marketplace
Classifieds
Contact Us
1 of 5 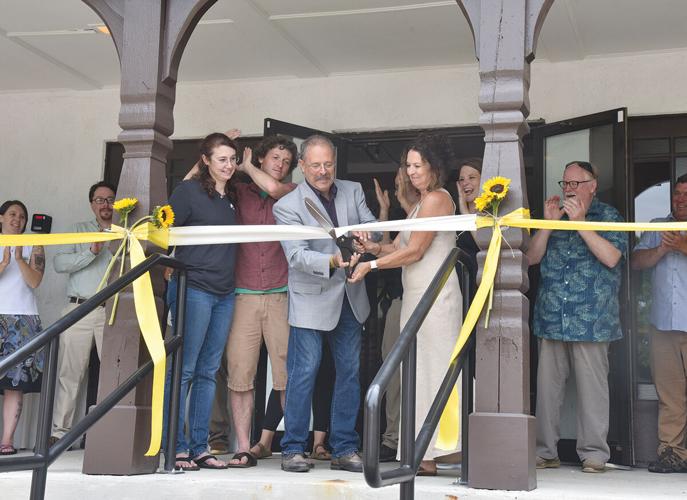 Greg and Dawn Tatro cut the ribbon on Jenna’s House, a new addiction rehabilitation center in Johnson. The Tatro’s lost their daughter, Jenna, to opioid addiction and have been on a mission to help Lamoille County fight the scourge of drug abuse. 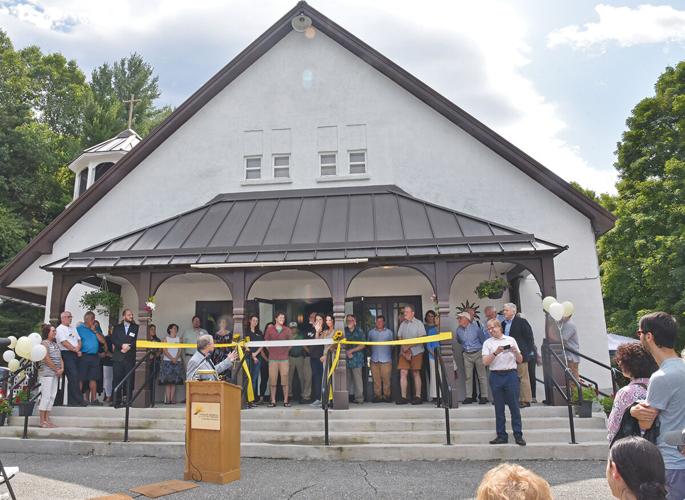 Greg Tatro looks back at Jenna’s House and addresses those in attendance Saturday at the opening of a drug treatment facility in Johnson named in honor of his daughter, Jenna. 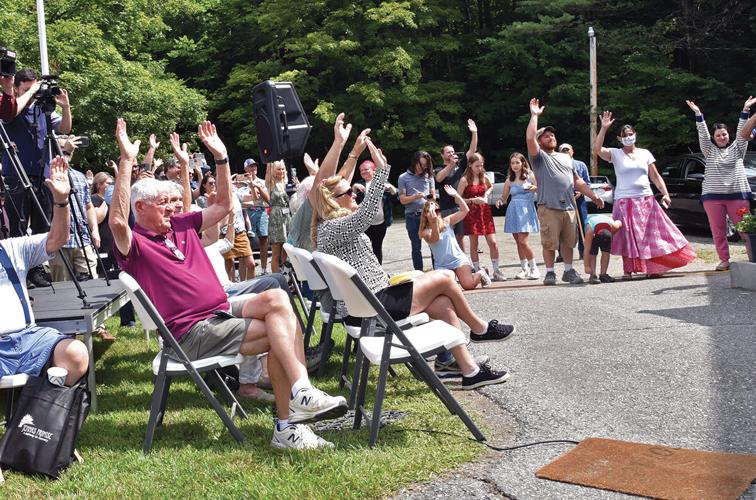 Everyone in the assembled crowd raises their hands and calls out in unison, “Jenna’s House is open.” 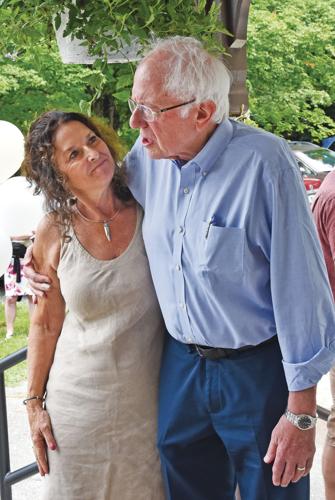 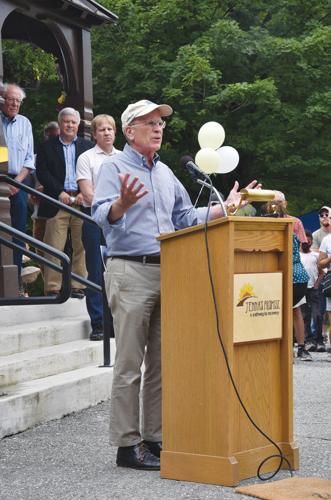 Greg and Dawn Tatro cut the ribbon on Jenna’s House, a new addiction rehabilitation center in Johnson. The Tatro’s lost their daughter, Jenna, to opioid addiction and have been on a mission to help Lamoille County fight the scourge of drug abuse.

Greg Tatro looks back at Jenna’s House and addresses those in attendance Saturday at the opening of a drug treatment facility in Johnson named in honor of his daughter, Jenna.

Everyone in the assembled crowd raises their hands and calls out in unison, “Jenna’s House is open.”

An array of local, state and national power brokers came out to christen the newly opened Jenna’s House Saturday, a new community center in Johnson and the crown jewel of the local recovery network non-profit Jenna’s Promise.

The presence of political heavyweights like former presidential candidate and independent Sen. Bernie Sanders and Democratic Rep. Peter Welch at the midday ribbon cutting opening the center and Republican Gov. Phil Scott, who received the organization’s first Inspiration Award and delivered a keynote speech at a formal dinner later that evening, reflected the support the innovative addiction treatment network has received as well as its ambition.

The opening of the center was a landmark moment for Greg Tatro, CEO of the G.W. Tatro construction company and Tatro family patriarch, who founded Jenna’s Promise with his wife Dawn and son, Gregory, and his wife, Amy, after his daughter Jenna died from a fentanyl overdose in 2019.

The day was a celebration, though bittersweet, and a reflection of the progress the family has made toward addressing what they see as the shortcomings of Vermont’s addiction recovery programs and the holistic, “wrap-around” treatment programs they’ve pioneered in Johnson.

The constellation of Jenna’s Promise programs — JP’s Promising Goods, a discount store that also employs people in addiction recovery; the Rae of Hope, a sober house started on an infusion of cash from the Casellas, owners of the billion-dollar waste management company; and now Jenna’s House — were all built by the goodwill among the movers and shakers of Lamoille County the Tatros have attracted and leveraged with their political clout, innovative approach to addiction treatment and story of resilience.

The Jenna’s Promise programs, in partnership with Lamoille County’s North Central Vermont Recovery Center, stand as a remarkable response from one powerful family’s decision to make use of their resources and responding to a personal tragedy by taking on the entrenched systemic issues that caused it.

The opioid epidemic has been responsible for nearly 1,000 deaths in Vermont since 2010 and was made worse by the isolation demanded by pandemic lockdowns, with 157 deaths occurring in 2020 — a 38 percent increase from 2019’s death toll.

“We were determined to try and make sure that other families would have better opportunities for success than we had,” Tatro said. “We saw where the system failed and fell short. In Jenna's obituary, we wrote that our daughter’s journey was like a rock thrown into the lake. The rock might disappear, but the ripples roll ever outward into the future.”

The Jenna’s House community center, which will host paid and unpaid community events, narcotics anonymous meetings and generally function as a place for recovering addicts to seek refuge, was built in the renovated remains of St. John the Apostle Catholic Church.

It was the church where Greg and Dawn Tatro were married, where Jenna Tatro had her first communion and, ultimately, purchased with Jenna Tatro’s life insurance money in fulfillment of a promise she made to spread the word about the real issues facing those in recovery from opioid addiction, a promise her family has been intent on seeing through.

Welch and Sanders made in-person appearances at the ribbon cutting ceremony despite the ongoing intense budget negotiations happening in Congress.

“It’s very good to be out of Washington,” he said to the crowd.

Sanders spoke of the loss of his mother at a young age and his grandmother’s heartbreak.

“My grandmother couldn’t read and she couldn’t write and she was very smart,” he said. “She said to me, when my mother died at a young age, that the hardest thing in her life was to bury a child. Parents should not be burying children, children should be burying their parents.”

He praised the Tatro’s resilience and their ability to use their loss to fuel their compassionate and innovative approach to addiction treatment. He also said that more federal funding would be coming for holistic, innovative treatment programs like Jenna’s Promise.

Though American Rescue Plan Act funds are already being allocated and potentially more funding may arrive through the budget reconciliation process, Sanders did not specify from where this money would flow.

“This may be one of the first treatment centers of its kind like this in the state,” said Lamoille County Sen. Richard Westman. “This is all about the dignity and humanity of the individual. All sorts of people end up not where they expected with addiction problems. This is about supporting people to help all of us get better. Because if you have an addiction in a family, whether it’s drugs or alcohol, it affects not only that individual, but it affects the whole family.”

As old church bells rang and the ribbon was cut, the assembled crowd, filled with free food and encouraged to enter a raffle for a free grill, called out in unison: “Jenna’s House is open.”

In the evening, a formal dinner for prominent donors, politicians and special guests of the Tatro family was held to further commemorate the opening of Jenna’s House.

Everything — from the nave windows to the white tablecloths lined up like pews in the main room to even the hors d’oeuvres plates carried among the crowd — was covered in sunflowers, Jenna Tatro’s favorite flower and the nonprofit’s symbol of hope, a reminder of who the evening honored.

The event, emceed by Vermont Association for Mental Health and Recovery president Peter Espenshade, was a star-studded testament to the Tatros and their choice to — in their words —stand up instead of lie down and, through sheer force of will, change the addiction recovery landscape in Vermont.

Video messages were projected onto the altar wall from Welch, Vermont Sen. Patrick Leahy, former presidential candidate and New Jersey Democrat Sen. Cory Booker and Trey Anastasio, the frontman from the Burlington-born jam band Phish, who met the Tatros in the process of opening his own addiction recovery program in Ludlow.

Guests at the dinner included high-ranking members of Vermont’s recovery and healthcare community, local politicians and representatives of the region’s most powerful business interests like the Casellas and Bill Stritzler, owner of Smugglers’ Notch Resort.

But the heart of the event was the personal testimony from those in recovery, personally aided by the Tatros and Jenna’s Promise, who spoke during the dinner.

Some spoke in a video of watching their friends die from overdose and being provided a safer way of living by the Jenna’s Promise programs. Two guests, Kyle and Tyler, talked about struggling with drug addiction while working trade jobs, falling into further addiction during the pandemic and the help that the Tatros had personally given them in their recovery.

While introducing Scott for his keynote speech and award, Greg Tatro called upon the powerful assembled before him to address the employment issues in their industries by hiring those struggling with addiction issues.

“There’s so many people here that are looking for workers,” he said. “Give these folks a chance. Hire them, take them under your wing. These people are loyal. Once they get straightened out, just look out, because they’re good workers and there’s so many out there.”

Scott, who knew Tatro from his days working in the building trades, was one of the first to call on the family after Jenna’s passing. In the weeks that followed, he sent an advisor to sit and listen to the family about the gaps they saw in the state’s addiction treatment programs.

“This could be a model for the rest of the country,” he said. “This is homegrown, this is grassroots. This could help others throughout the country. This is the right support at the right time to make a real difference.”

While Scott sees Jenna’s Promise as a model from the rest of the country and exemplary grassroots action, he doesn’t see the need to push any specific legislation to address the opioid crisis.

Though he reluctantly signed a bill earlier this year allowing the sale of certain amounts of buprenorphine, a drug that treats opioid dependency, he was adamant that data would be tracked to ensure it was effective. To him, the best way to address the increase in overdose deaths that accompanied the pandemic is to simply end the pandemic.

“The government itself cannot fix all the problems, but a combination and support from the government along with communities working together and individuals that are passionate about this: That’s the secret. Getting people involved and aware of the issue. That will reduce the stigma and bring new ideas and creativity to the table,” he said.

This story has been updated. It incorrectly referred to a Jenna’s Promise sober residence as Rae of Light. It is Rae of Hope.