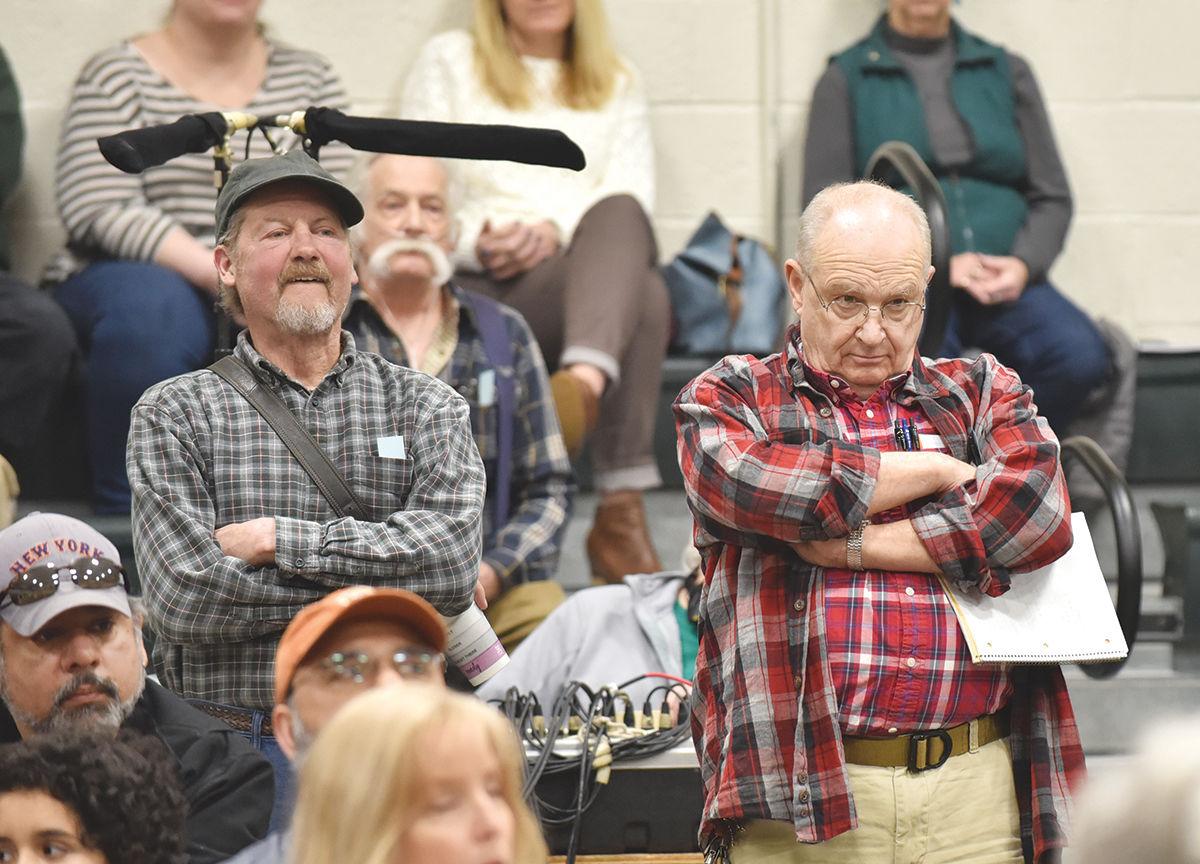 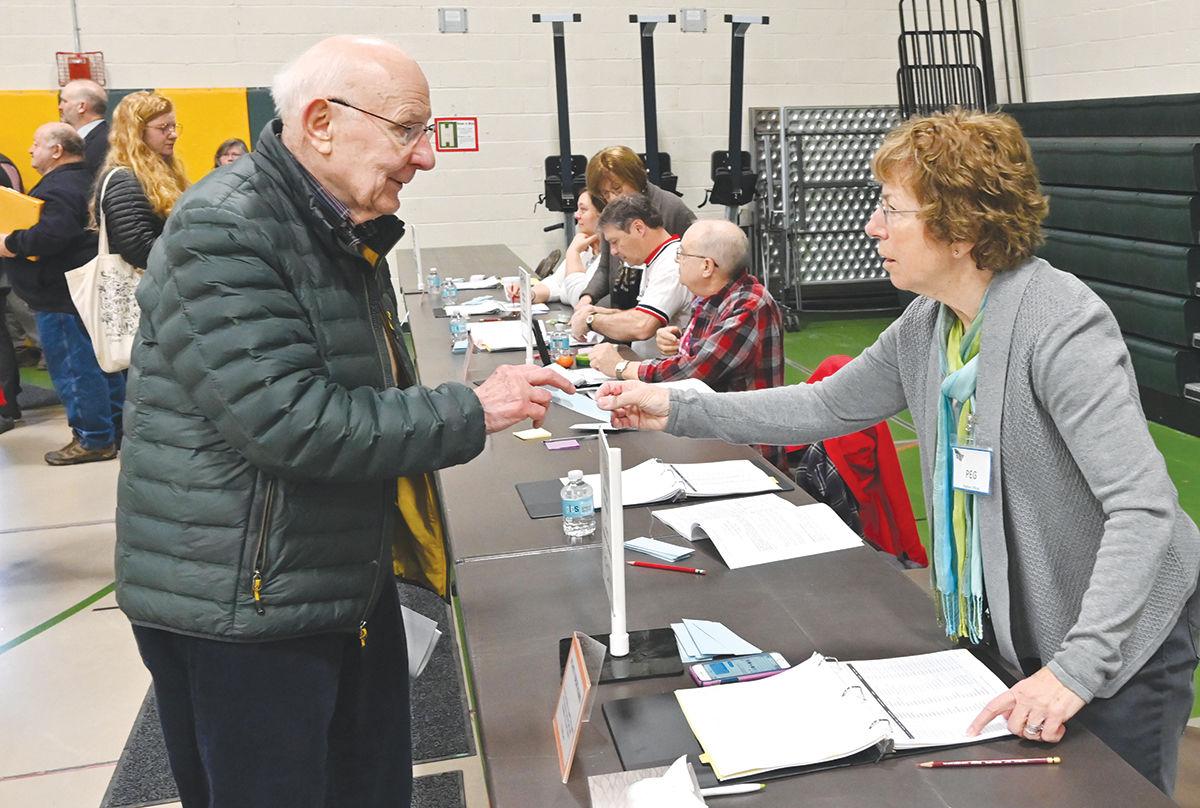 Registered voter Herb Tilley checks in with Peg Demars on his way to Morristown’s annual town meeting on Tuesday.

Registered voter Herb Tilley checks in with Peg Demars on his way to Morristown’s annual town meeting on Tuesday.

A truism about Vermont town meeting is that the less something costs, the more time will be spent discussing it.

In Morristown, the bulk of voter participation was spent on $114,000 allocated to two dozen organizations that serve the Lamoille County area.

By comparison, the town budget of nearly $7 million passed with barely any dissent, other than a failed attempt to add money to it.

In the future, Allison Link and Nina Church suggested, the town should have a committee to determine how appropriations are handled. That led to a whole conversation about how organizations go about asking for money. Asks ranged from $900 to $15,000.

Aimee Towne said those organizations are basically getting “free money” from the town, and all they have to do is turn in a petition with about 200 signatures to be considered.

“Let’s not give the money; they might show up,” Towne said.

That comment brought people out of the woodwork. One by one, representatives from the various organizations took a turn at the microphone — people from the two youth centers in town, from River Arts, Justice for Dogs, the Lamoille County Civic Center, Lamoille Housing Partnership, Clarina Howard Nichols Center, Lamoille County Mental Health Services, Habitat for Humanity.

“To say that we aren’t here is falsehood,” said David Bickford.

Ultimately, the $114,000 in appropriations remained intact, and was approved overwhelmingly, with a faint nay heard from the 166 people.

That money contributes to things like these: two different youth community centers in town, two outfits dedicated to animal welfare, and myriad organizations whose missions are to aid vulnerable people — from those escaping domestic violence to senior citizens hoping to stay in their homes as long as they can.

Looked at another way, it costs slightly more than a mile of shim-coat paving in town.

Another thing about town meeting: You’ll rarely hear any talk about how good the roads are.

Morristown’s $2.17 million highway budget accounts for about a third of the town’s overall operating costs, but only $190,000 is set aside specifically for paving.

Town administrator Dan Lindley said that money, added to about $80,000 left from the previous year’s paving budget, would get about 2.5 miles paved. The target areas for this summer are the 1.25 miles of Randolph Road that haven’t already been paved in the past couple of years, and the stretch of Stagecoach Road between Morristown Corners and the Cady’s Falls area.

David Bickford said the previously paved portions of Randolph Road are already starting to crack, and suggested the highway department hunt for the underlying reason for perennial problem spots.

David Polow proposed adding $60,000 to that line item for paving — to which Ed Wilson quipped, “It seems to me that David made an excellent argument to get his road paved.” If people were going to start adding money to the paving budget, Wilson said, he’d propose a lot more amendments himself.

Select board member Eric Dodge said the budget is already higher than he and the rest of the board wanted it to be. He suggested that the board just meet later and talk over paving priorities within the proposed budget.

Dodge’s silver lining: “It’s a much nicer town to drive in than it was three years ago.”

In other road woes, Lee Labier said he was frustrated that a culvert on his road in Mud City, washed out during the Halloween storm, hasn’t been replaced yet. Dodge said the state declined the town’s request for a temporary bridge, since it’s a loop road, and other dead-end roads throughout the state would have priority.

In other budget discussions, Richard “Buckwheat” Lowe, one of the most reliably opinionated Town Meeting Day participants, criticized the town’s emergency medical services department for running about $20,000 behind on revenue for billable ambulance services, due to patients whose insurance didn’t cover it.

“Until you need it,” Dodge replied. “We don’t want anyone to ever second guess calling 911 based on cost.”

That sentiment was seconded by Sara Russell and Cheri Giroux.

“They are not businesses. They are public services,” Giroux said. “I am so proud to live in a town that has such a strong mutual aid system.”

Voters also agreed to add a penny to the tax rate — in Morristown, that’s about $65,000 per penny — to a capital equipment fund for the fire department, and another penny for the highway department equipment fund.

Wallace Reeve said that, since the “fire department cost is not going down” and the call volume is increasing, next year the town might want to propose a 1.5-cent addition to its equipment fund.

Voters raised questions about how the town assesses penalties for people who are late in paying their property taxes.

Late payments are assessed an 8 percent penalty, with 1 percent interest per month for the first three months late — and 1.5 percent per month after that.

For some, that seemed an onerous penalty, especially, as Allen Church noted, if they pay their tax bill the day after it’s due. He suggested that, with modern technology, the town ought to be able to pro-rate it.

Voters elected three members of the five-member select board.

Gary Nolan won a three-way race to fill the seat left open when Chris Towne resigned in January. Nolan, longtime head of the town’s development review board, received 772 votes; Laura Streets got 366 and Travis Douglass 233. Nolan said he plans to remain on the review board.

About 40 percent of Morristown’s registered voters went to the polls Tuesday, and 5 percent more had voted early.

Official turnout for the annual meeting was 166, about 4 percent of the town’s registered voters. The number of people at the meeting appeared significantly higher at its peak, although the crowd included children and teenagers.

The other ballot item, a nonbinding resolution “to strongly support” completion of the Lamoille Valley Rail Trail by 2025, passed overwhelmingly, 1,096-118.

Some of the more animated parts of Morristown’s town meeting came in the half-hour or so before moderator Shap Smith gaveled the meeting to order.

Allen Church said, “Promises made and promises broken look bad.” Monte Mason said state employees had already given up enough and shortcomings in the fund got him “irritated behind the neck.” Aimee Towne was blunter, calling it “shameful.”

Ed Wilson shared a litany of displeasure with the lawmakers, from the increased minimum wage law, passed over the governor’s veto, to the Global Warnings Solutions Act, to last year’s legislation codifying a woman’s right to choose to have an abortion or not. Wilson did say later in the meeting that Yacovone came up to him and the two shared a friendly moment, in the spirit of civil disagreement.

And finally, Aimee Towne used the “other business” portion of the meeting to express her displeasure on the “negative” things she’s been reading about Morristown in the newspaper. She referred specifically to social media misuse among town officials, saying, “If you’re in a position of authority, you ought to act better.”

The nation may have called it Super Tuesday, but here in Vermont, we know it as Town Meeting Day. It’s the one day of the year where you get t…