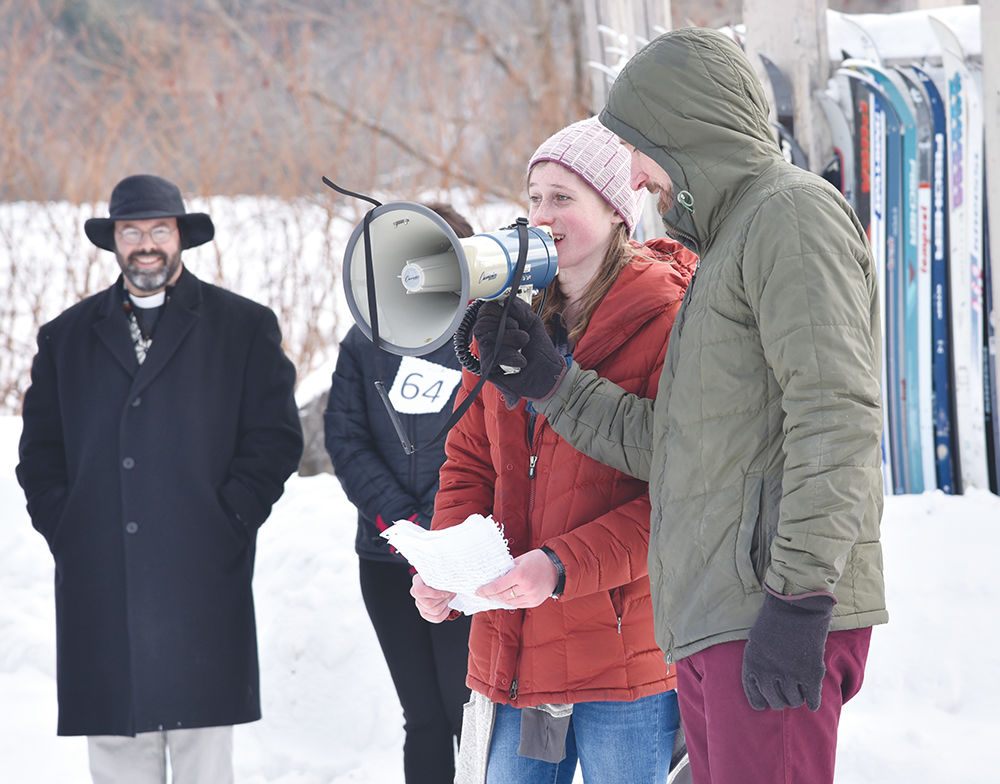 Cecilia Stefanski, a middle school student at Lamoille Union, speaks to a group of people Feb. 6 who had just walked through Morrisville village to raise awareness for homelessness. To the left is Father Rick Swanson, who decided enough was enough and has led the effort to turn churches into shelters for those needing a place to stay. 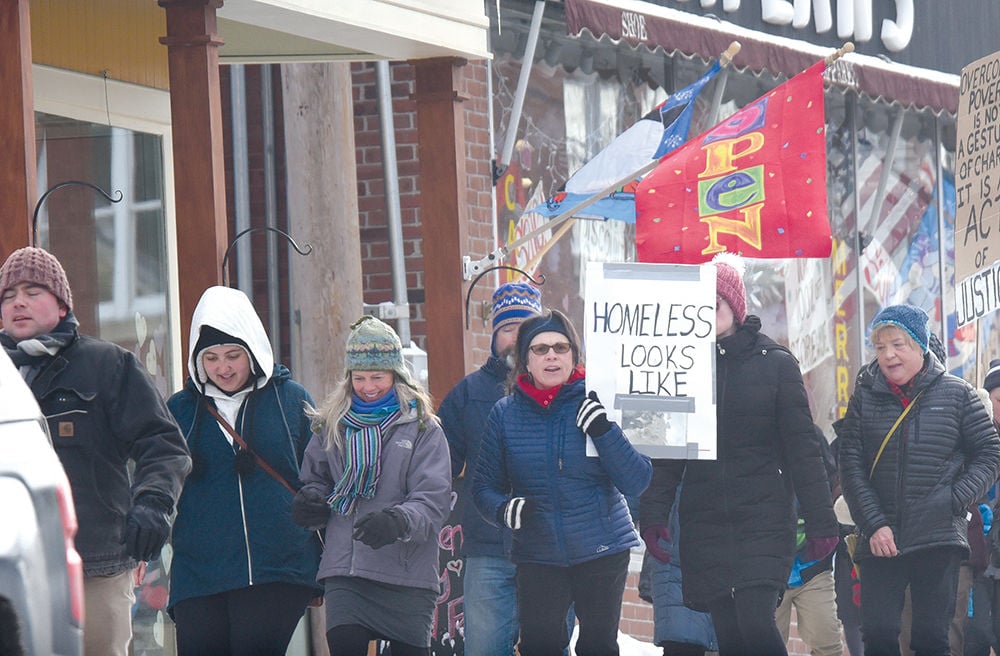 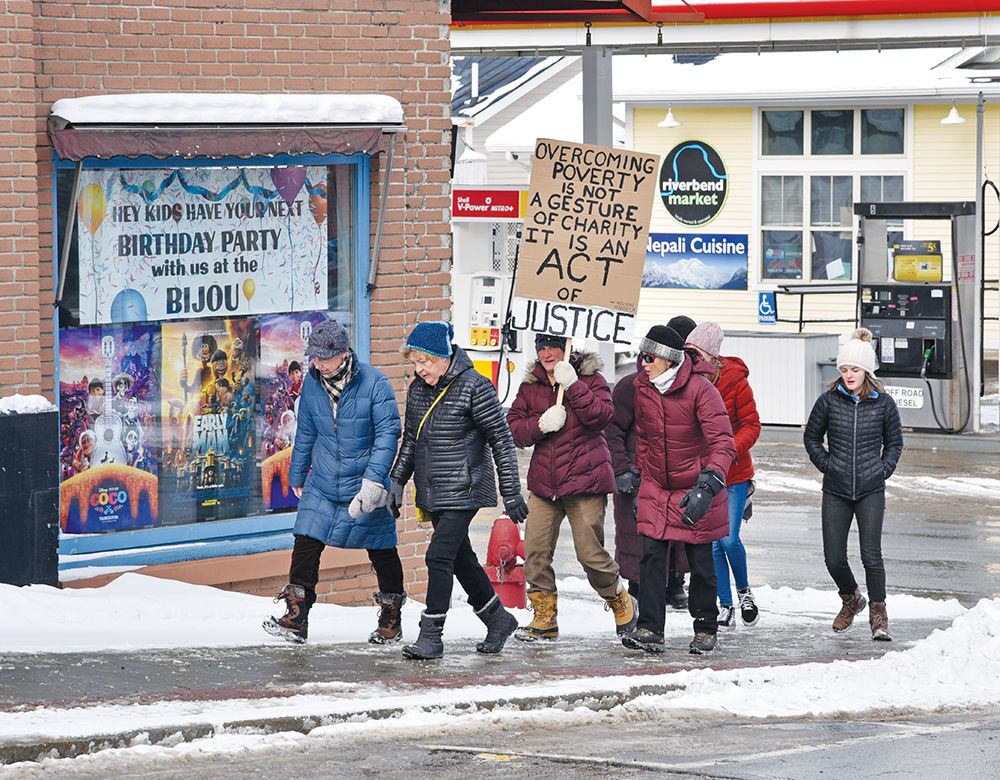 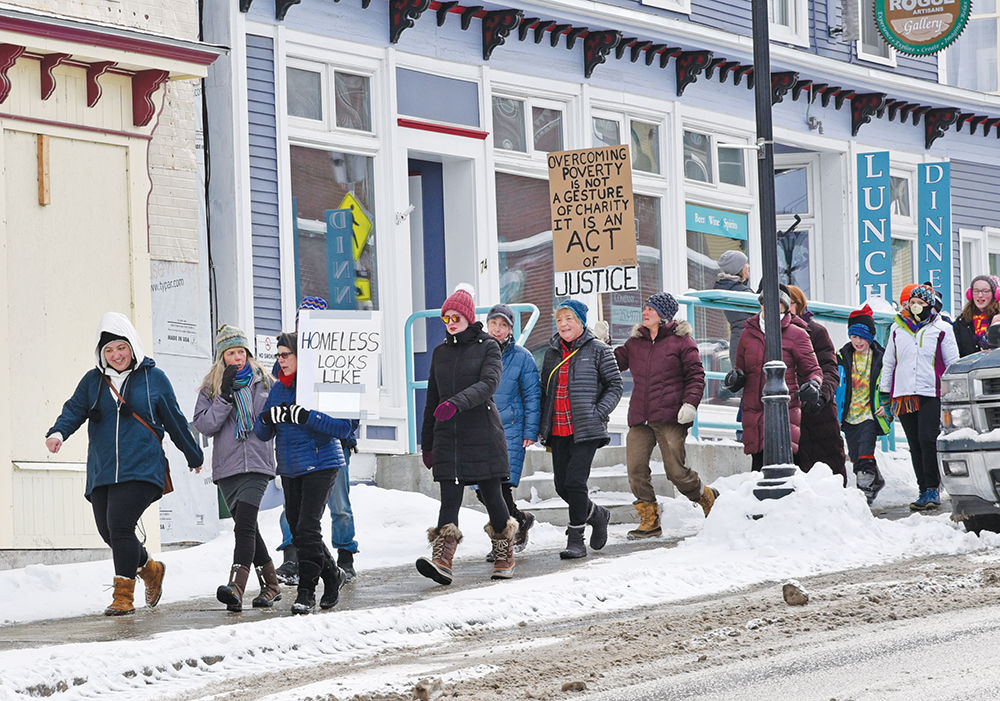 Cecilia Stefanski, a middle school student at Lamoille Union, speaks to a group of people Feb. 6 who had just walked through Morrisville village to raise awareness for homelessness. To the left is Father Rick Swanson, who decided enough was enough and has led the effort to turn churches into shelters for those needing a place to stay.

A hundred-person line walked through Morrisville earlier this month, a friendly mass impossible to miss if you happened to be out and about on the crisp, bright day. Those people were purposely visible because the population they represented are usually hidden from sight.

“In a rural community, homelessness can feel invisible,” said Will Eberle, the Morrisville field director for the Vermont Agency of Human Services. “You don’t walk down the street and step over homeless people sleeping on the sidewalk to get to the coffee shop. You don’t see people flying signs at every underpass and median.”

Last year, the Vermont Coalition to End Homelessness determined, based on a one-night census of Vermont’s homeless population, that 64 people in Lamoille County, almost half of them children, didn’t have a place to live.

That number was nearly triple the previous year, and this year’s numbers are expected to be even higher. This year’s count was done Jan. 31, one of the coldest days of the year; the numbers have not yet been released.

Eberle said his agency’s housing solutions team” pores over a six-to-eight-page list of individuals and families who are, or are about to become, homeless, and tries to secure safe and stable housing for them.

“Anyone can become homeless at any time,” Eberle said. “It is not a moral lapse or a shortcoming of character, but a crisis, a state of emergency that has more causes than we could list.”

The awareness walkers included the people who make up the social safety net in the area: from community action agencies like Capstone, from the Vermont Agency of Human Services, and from agencies that deal with mental health, family services, housing, substance abuse treatment and recovery, law enforcement, restorative justice, health centers and hospitals, schools and churches.

Sherry Marcelino, a community support coordinator from Lamoille County Mental Health Services who organized the awareness walk, said numerous obstacles lie in the way of eradicating homelessness. Substance abuse, mental and physical problems, an aging population in one of the most expensive states to live in, and about six months of winter — all contribute to Vermont’s growing homeless numbers.

Marcelino and other walkers wore bibs with the number 64 on them to remind people of the homeless count. She suspects it’s on the conservative side.

One person had affixed a mirror to a sign with the words “Homeless looks like” above it, a reminder of how it can happen to anyone, depending on the circumstances.

“We’re seeing more and more people on our list who are needing help securing housing, keeping housing, or are actually homeless,” Marcelino said.

Greg Stefanski, director of Laraway Youth and Family Services in Johnson, acted as emcee for a rally at the end of the walk, in Morrisville’s Oxbow Park.

“It’s not a simple issue. It’s complicated,” he said. “And, you know what, it’s gonna take more than just one generation.”

And with that, he introduced his daughter, Cecilia, a Lamoille Union Middle School student who reached out to the young people in the rally — including the sixth-grade class from Johnson Elementary School, where Cecilia’s younger brother attends.

The day after Christmas, the Rev. Rick Swanson, rector at St. John’s in the Mountains Episcopal Church in Stowe, walked outside after having lunch at a Montpelier restaurant. It was 12 degrees out, with a stiff wind making it even colder.

“And I said, I can’t do this anymore. We have to do something.”

Swanson sent Eberle a three-word email: “Let’s do this.”

Swanson opened up his church’s doors to anyone who needed respite from outside temperatures stuck well below zero.

Six weeks later, that winter shelter is still taking people in, and churches in Hyde Park and Johnson have opened their doors, too.

“Other than the first couple of nights, since Dec. 27, we’ve had a minimum of six, and up to 11, either at St. John’s or the other three churches around the county that are hosting a shelter,” Swanson said.

As recently as mid-December, the nearest shelters were in Burlington and Vergennes, and they fill up quickly, especially as temperatures drop.

Rabbi David Fainsilber of the Jewish Community of Greater Stowe wrote about the shelters last month in a letter to the editor. He said he was “touched to the core” by a couple of stories from the shelter. One young family with an 18-month-old baby stayed at St. John’s several nights in a row, after previously having to tough it out overnight in their car.

Another guest at the shelter showed his gratitude by waking up early in the morning and buying eggs and bacon on his EBT card, and cooking breakfast for everyone who spent the night.

Societal stigmas toward homeless people can sometimes lead to a not-in-my-backyard mentality when it comes to homeless shelters.

Take Morrisville, for instance. Since 2015, the Lamoille Valley Housing and Homeless Coalition, of which Eberle is co-chairman, tried to get a permanent shelter in town.

But, he said in December, the coalition faced concerns about whether a homeless shelter would admit intoxicated people, whether it would attract people who aren’t from Morristown, and the effect it might have on downtown revitalization.

Coalition members were accosted with questions about why they were trying to help people who “got themselves into this situation,” Eberle said.

Now, spurred on by the churches, a lot more people are taking things into their own hands.

The Red Cross has provided cots and supplies, and volunteers from all over the community are signing up to take shifts at the shelters.

“People from the highest levels of (the Vermont Department for Children and Families) all the way to the citizens of Elmore and Stowe are either supporting the shelter or being guests,” Swanson said during last week’s awareness march. “It’s amazing. And it’s not just the faith communities.”

Stowe Police Chief Don Hull and his officers check on the shelter regularly to make sure everyone’s safe, and Lamoille County Sheriff Roger Marcoux does the same for the Hyde Park and Johnson shelters.

Marcoux is also working to set up a more permanent regional shelter in Hyde Park, smack in the middle of Lamoille County. He’s been working with the Red Cross to secure a mobile trailer that can carry cots, blankets, food and water to and from the shelters. Marcoux already has a building in mind, one of the department’s properties set back a bit from Main Street.

“I’m not in that business, so to speak, but I’ve got a place that I’ve been keeping heated for two years,” Marcoux said. “It’s a joy, in my position, to be able to do this.”

Said Eberle, “We are here today to draw a line in the snow and say we don’t want homelessness to be a part of our community anymore. We’re no longer interested in focusing on blame and judgment. We are willing to roll up our sleeves and do our own part to ensure we all have a bed to sleep in every night.”

Since Dec. 27, church leaders have worked to keep people warm and safe at church-housed shelters in Stowe, Hyde Park and Johnson.

Volunteers are needed, including two overnight volunteers every night; they must be vetted by the Red Cross. Email lamoilleshelter2018@gmail.com or Elaine Fortin of the Red Cross at efortin@comcast.net. When you’re cleared, you can contact John Clark at 888-4864 or jjclark@myfairpoint.net.

The Feb. 6 homeless awareness walk was organized to bring attention to the many people living throughout Lamoille County who have no roofs ove…