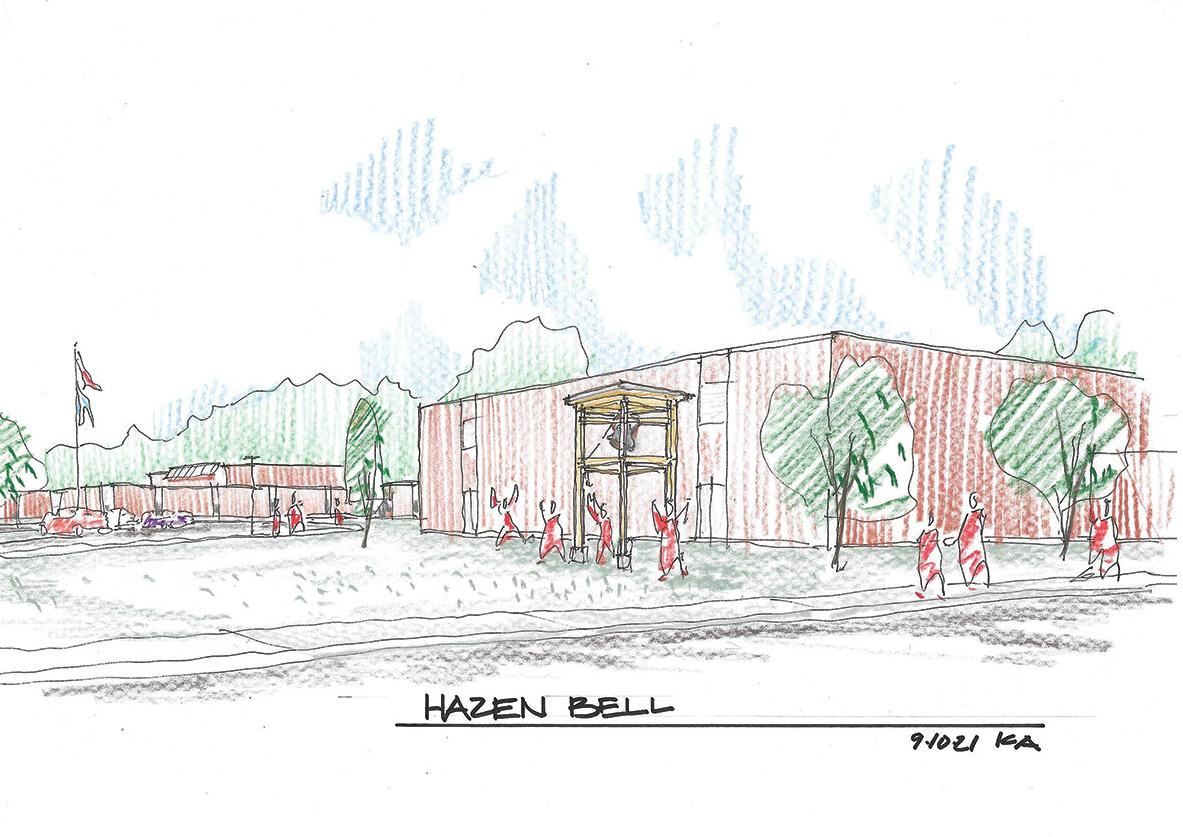 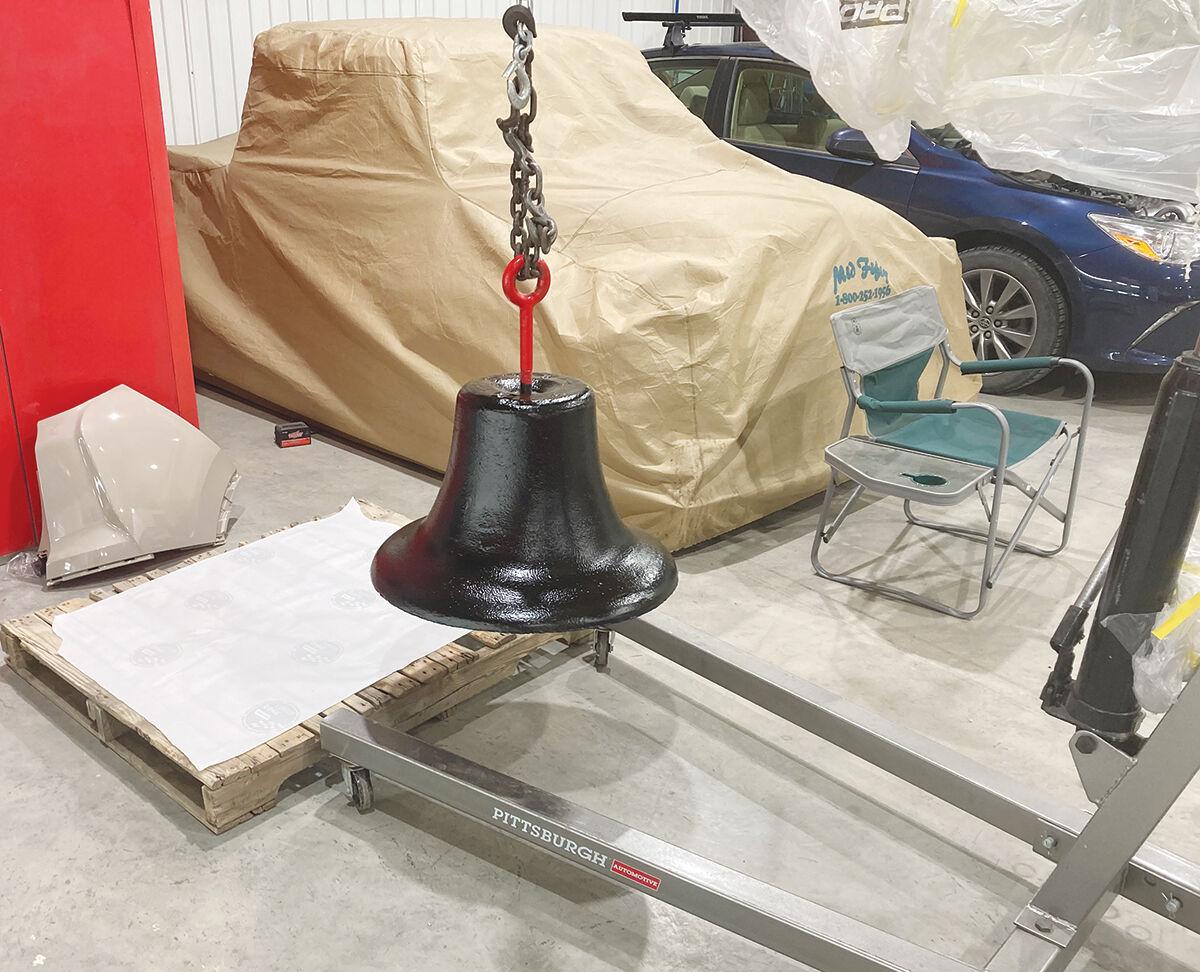 The committee plans to put the bell on display in an upcoming fundraising drive.

The committee plans to put the bell on display in an upcoming fundraising drive.

Finn Rooney was a sophomore at Hazen Union School, attending a class on Hardwick sports history, when his interest in the Hardwick Academy bell first got piqued.

Then, on Jan. 3, 2020, Rooney, then a junior, a person so full of life, inexplicably took his own. The extraordinarily tragic news shook the school and the town.

From that point in time, the resurrection of the bell took on added meaning, a push to bring back the bell in Rooney’s honor.

Mike Clark, who attended the academy before it was torn down in 1970, stood in front of Aaron Hill’s large class the day Rooney became interested in the bell, fielding questions and filling the room with stories of the latter days of the academy and the first days at Hazen. A 1972 Hazen graduate who also attended Hardwick Academy, Clark told the class about a wonderful tradition, the ringing of the bell after important sports victories.

Clark spoke of how, as a kid, he would be outside in his front yard on the nights of big games, anxiously waiting to hear the bell ring. During playoffs, it was an especially suspenseful time on the lawn, but an absolute joy when the bell started to ring.

Clark then told the class how five members of the Class of 1970, late one weekend night as the academy was being torn down, stole the bell so it would be saved. The group gave the bell back once they made sure it wouldn’t be destroyed, and it eventually ended up in Memorial Park by Hardwick Town offices, never to ring again.

Rooney was intrigued by the bell’s history and hoped it could be restored. It became a fixation as he imagined the bell becoming a community unifying symbol.

One must wonder how an entire town let this great bell tradition fall silent. But here was this young implant, nearly 50 years later, saying, “Hardwick, the bell needs to ring again.”

Rooney’s special gift was lifting the spirits of the people he touched. He loved baseball and excelled in the sport, he enjoyed hunting and fishing, he joined the Bread and Puppet band and was a volunteer firefighter for the Walden Fire Department. He loved bonfires and social settings.

Leading the charge to restore the bell in Rooney’s honor was Hazen’s outgoing principal Dave Perrigo, who has made it his mission to get the bell resurrected.

“Finn was just a remarkable, special human being for anyone who knew him,” said Perrigo. “In so many ways, he represented unusual hope in a dark time. His dream for this bell was that it would be a community unifying symbol and a healer.”

Perrigo said, “His death was so tragic for so many of us, but his dream for a bell was just a wonderful way for his sprit to continue to live on, and for his wonderful ideals to continue forever.”

Perrigo ran into a stumbling block when there was unanticipated pushback on using the old Hardwick Academy bell. But that didn’t deter Perrigo. Even if a new bell had to be bought, the project would move forward.

Heading into the spring, Greensboro town clerk Kim Greaves, who was following bell developments, stumbled upon an old bell in the basement of the town offices. She immediately set to work to get the town to donate the bell to Hazen.

Fittingly, on Memorial Day weekend, the bell was handed over to Hazen in a big ceremony behind the Greensboro town offices. With the Bread and Puppet band playing music and the Walden Fire Department on hand, the bell was paraded down to Hazen Union.

Finally, the bell project had legs.

In a later conversation with Clark, Perrigo got him to help form a diverse committee to continue the pursuit. The two went into action.

By October, architect Patrick Kane had presented an initial drawing and sketch of a bell tower. Committee members hope the final tower design will mimic the Hardwick Academy belfry.

“There is a concerted effort to get this bell built by the 2022 Hazen graduation day,” said Clark. “This year’s Hazen senior class would love to have something in place by then. So, we’ve got a committee, everyone is working really hard toward that goal and we’ve made some real progress.”

Fradette’s chance meeting with transplanted Craftsbury residents Rich Mathez and Bob Griffiths put the bell project into overdrive. He told them the story of the bell and asked the two to listen to Erica Heilman’s “Rumble Strip” story of Finn and the bell on Vermont Public Radio.

It didn’t take long for Mathez and Griffiths to join the committee and volunteer their services to restore the bell.

“You know,” Mathez said. “It’s really fulfilling for us, after all the stuff Bob and I have learned to do throughout our years in this business, to finally give something back. When we’ve got that bell in our hands, I mean, it’s really touching for Bob and me to have a part in this project.”

The two are not only restoring the bell, they re-engineering broken parts. They have machined a new pivot mechanism for the bell’s clapper, matched spokes that were in disrepair on the bell’s wheel, and recently employed another neighbor, Mike Roussell, who owns The Tailor Shop in Stowe, to make two leather pads for the clapper because the original ones were beyond repair.

The committee plans to put the bell on display in an upcoming fundraising drive. Fradette has already secured donated building materials to begin bell tower construction this spring based on Kane’s drawing of the bell that depicts where it will be placed beyond the gym.

Tara Reese, Finn’s mother, is humbled by the project.

“You know,” said Reese, talking of the bell’s journey, “I was even accepting of the fact that this project might not ever happen. But now, I mean, this is unbelievable, and if you stop and think about the logistics that are going into this project, and really the hearts of all the wonderful people involved, I mean, it’s just so beautiful.”

She said, “There is so much healing happening in my family right now, and it’s because of all the wonderful people who are involved in all of this.”

Hear Erica Heilman’s story about Finn Rooney and the bell at rumblestripvermont.com. For the complete version, go to vpr.org. Donations can be mailed to Hazen Bell Project, Box 189, Hardwick VT 05843. Patrick Hussey serves on the Hazen Bell Project committee.