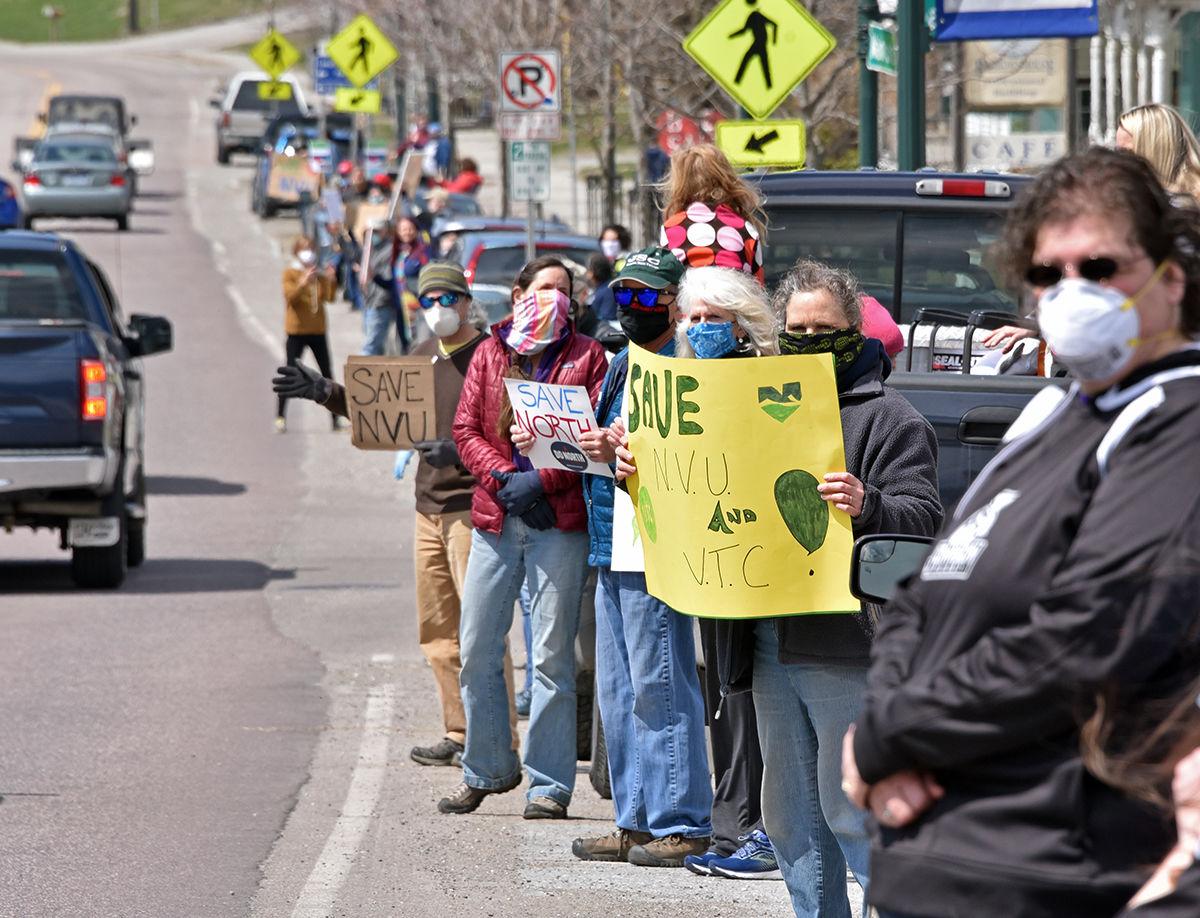 Protesters hold signs and holler at honking, sympathetic passersby on Johnson’s Main Street, objecting to a proposal to shut down Northern Vermont University-Johnson. 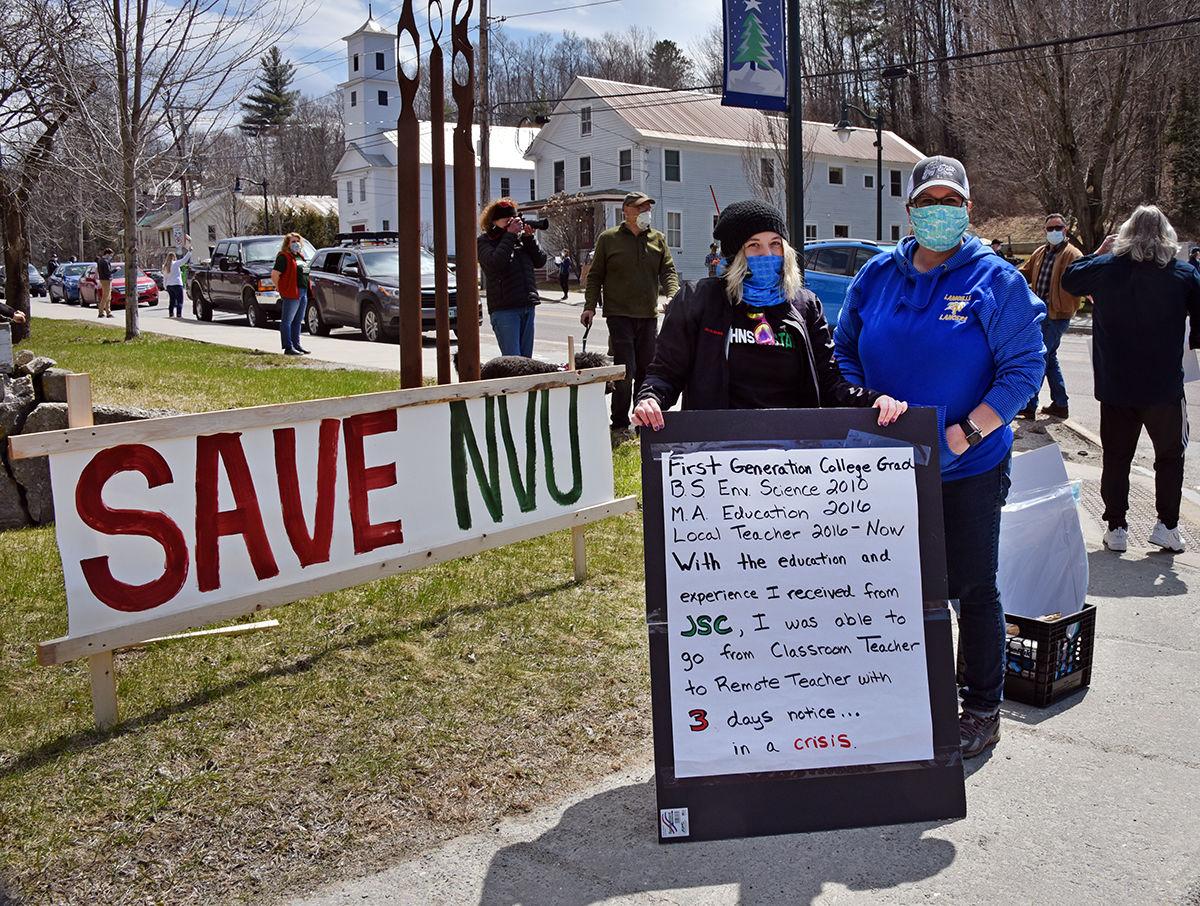 Lindsay Fletcher Minor and Darcy Fletcher hold a sign showing how a Johnson State College education is paying off for today’s students. 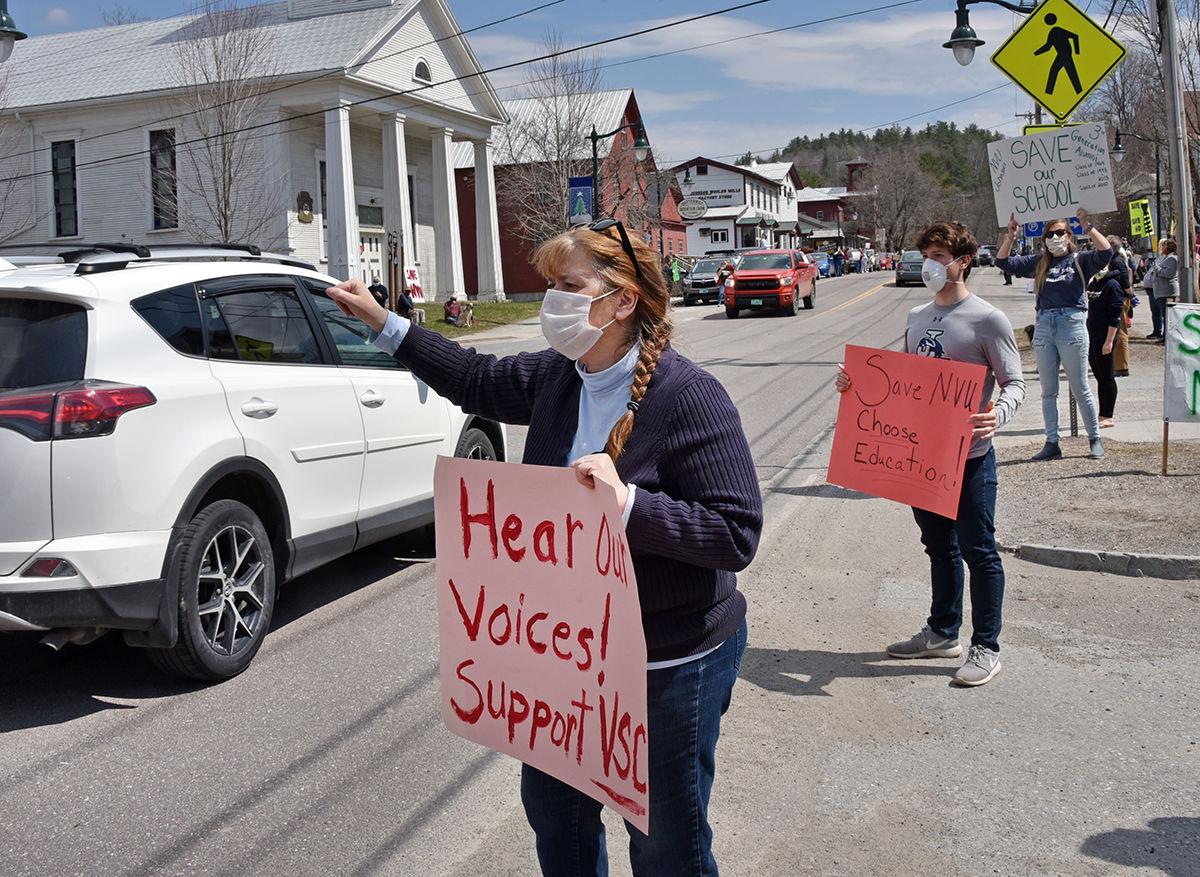 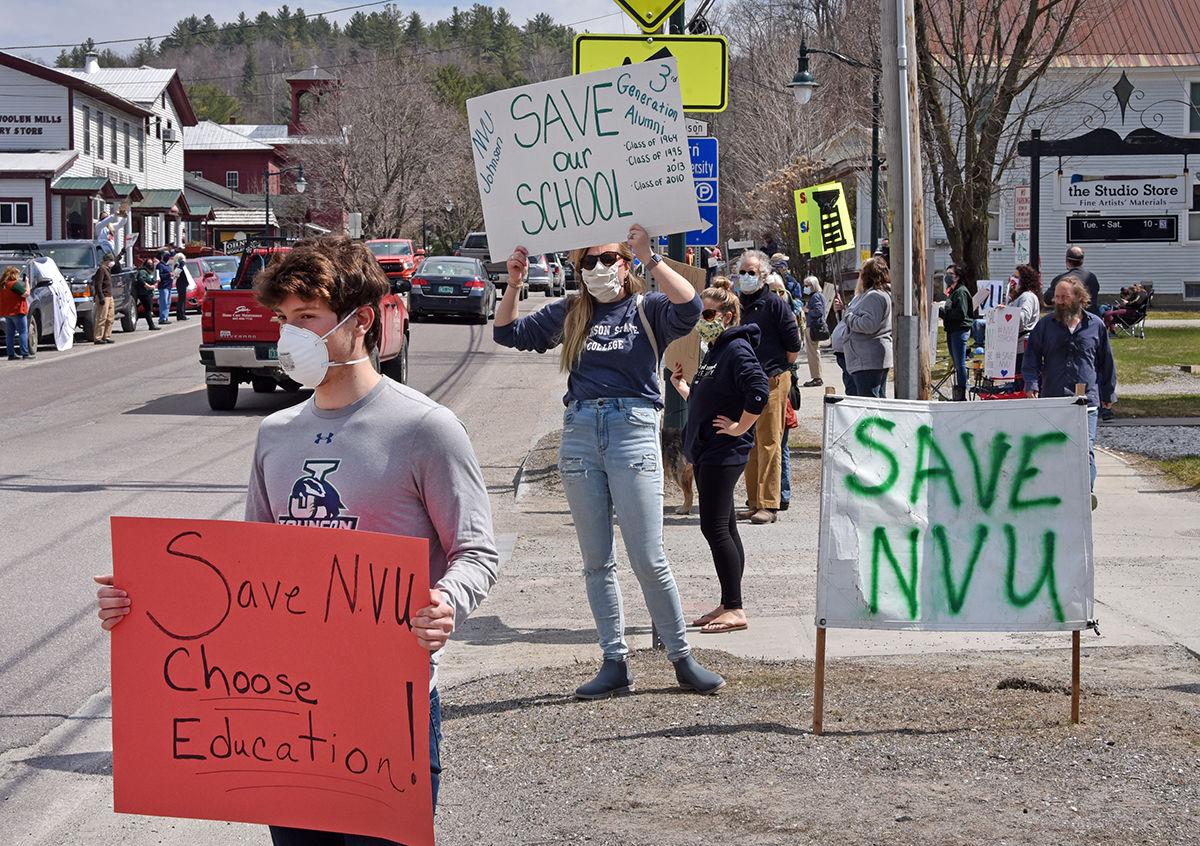 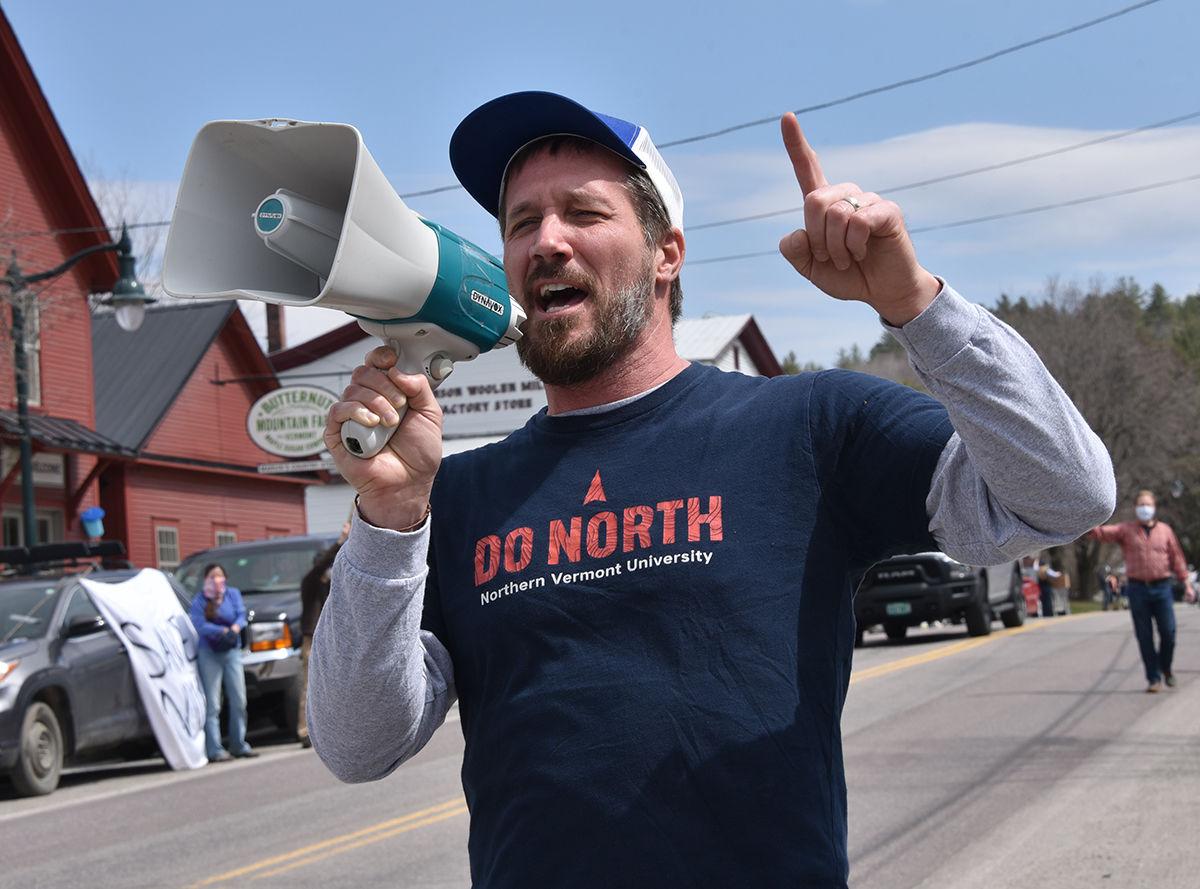 Protesters hold signs and holler at honking, sympathetic passersby on Johnson’s Main Street, objecting to a proposal to shut down Northern Vermont University-Johnson.

Lindsay Fletcher Minor and Darcy Fletcher hold a sign showing how a Johnson State College education is paying off for today’s students.

More than 200 people, at least half of them in face masks, bandannas, balaclavas and scarves, lined Main Street in Johnson Sunday afternoon in an impromptu protest against shutting down Northern Vermont University-Johnson.

Throughout the rally, which went strong for about two hours, hundreds of cars drove through town, with drivers honking their horns and passengers cheering out the windows. Countless cars made multiple passes through the village.

Although plenty of people eschewed the 6-foot social distancing rule, most of them abided by other recommendations, such as wearing face masks.

Halfway through the rally, Stefanski broke the news of Gov. Phil Scott’s call for the Legislature to find a way to protect the college system, bringing an already amped crowd to new levels of cheers.

Stefanski said it’s important to get the message to the college board of trustees, and the message is simple: “No vote. We’ve got better solutions than surrender.”

Numerous people shared their thoughts on why Johnson, which traces its history back 192 years, ought to be spared.

One of the most animated was Fadhili Achinda — “Fadhili means blessing, compassion and kindness,” she said, holding up a sign that says “NVU is my home” and “NVU is love” — a recent graduate who moved to Vermont from Tanzania.

“I don’t call them friend. I call them my family already,” she said. “I got a good education and we became family. Everybody knows everybody.”

Nearby, Etta Parker, from Honduras, said she’s lived in Johnson for 24 years. Parker — she married a local man — said international students and artists flock to town for the rural nature. They support businesses, like the local bookstore, and attend dance performances and Shakespeare plays at the Dibden Center for the Arts.

Elijah English, class of 2015, stood on the side of the road, barefoot in shorts and sporting his old red, white and blue Johnson State College rugby jersey and holding a faded rugby ball.

With the ability to meet with professors one-on-one, and the support staff, English called Johnson a “state college with the feel of a private university.”

“Johnson’s one of those places that you stumble upon accidentally, you fall in love with, and you stay,” English said. “Everyone is accepted, both academically and socially.”

Lindsay Fletcher-Minor from Waterville recently wrapped up her master’s program in teaching at the Johnson campus. Like countless before her, she is a first-generation college graduate, thanks to Johnson.

“Lamoille County’s my home,” she said. “I like being here. There’s something special about it.”

As far as commuting to Castleton instead, for other people who live in rural pockets here or the Northeast Kingdom?

“That’s completely unrealistic,” Fletcher-Minor said. “Especially if you need that experience with a professor to coach you through things. There are some things you just can’t do online. Sometimes, you need that face to face.”

Two sons of Johnson steeped in politics offered their thoughts.

“Obviously, the town is not happy,” said Matt Hill, a Johnson native now serving as its representative in the Vermont House.

Hill, decked out from head to toe in Johnson State College ball cap, T-shirt and sweatpants, stood near — but not too near — Duncan Hastings, a former Johnson municipal employee who’s worn his own share of hats.

“I have a feeling that everybody on the board and Jeb (Spaulding, the chancellor) felt it was a fait accompli. I sure as hell hope it’s not,” Hasting said. “It just seems odd to me that the governor and state officials profess to be wanting to see job retention and job creation.”

Hill, who has called for a vote of no confidence on Spaulding, said he thinks the coronavirus was being used as an opportunity.

“I think Jeb and the board have miscalculated the lack of interest in the state colleges,” Hill said.

Hill thinks the board “will do the right thing” and let the Legislature put together some bridge funding and keep the colleges open until a more long-range plan can be sussed out.

“I can’t imagine it’ll go much further than this,” Hill said.

Achinda said lawmakers like Hill need to protect the colleges.

“They don’t have the money? Then go find it,” she said. “That’s all I got to say. Find the money. Because we are not closing our home.”

Which came as more of a shock? The plan announced Friday to almost immediately close colleges in Johnson, Lyndon and Randolph or the withdrawal of that plan late Wednesday morning.