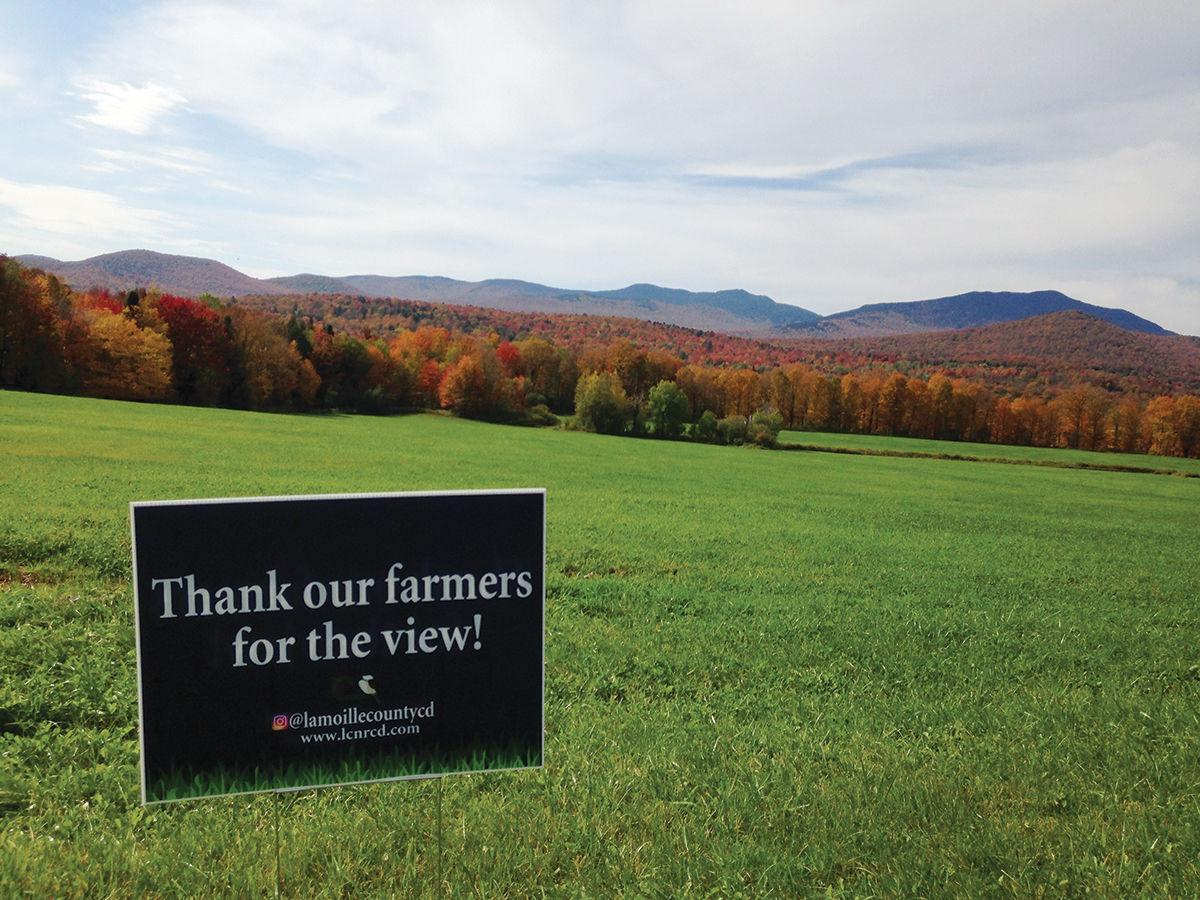 More than 30 students from Peoples Academy teamed up with two local artists, Jennifer Hubbard and Rett Sturman, to create “Thank Our Farmers for the View,” an exhibit at River Arts in Morrisville that celebrates small local farms, their ongoing struggle and the spectacular Vermont views they create as part of their way of life. 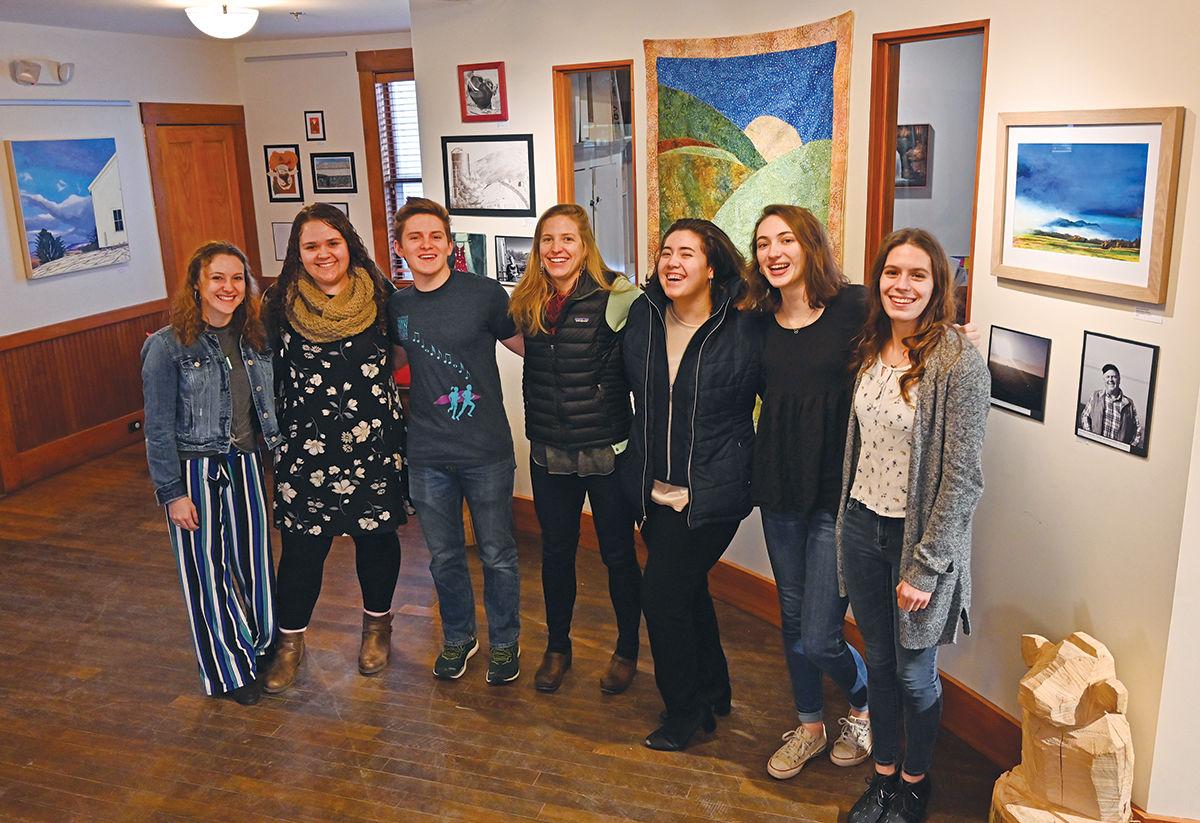 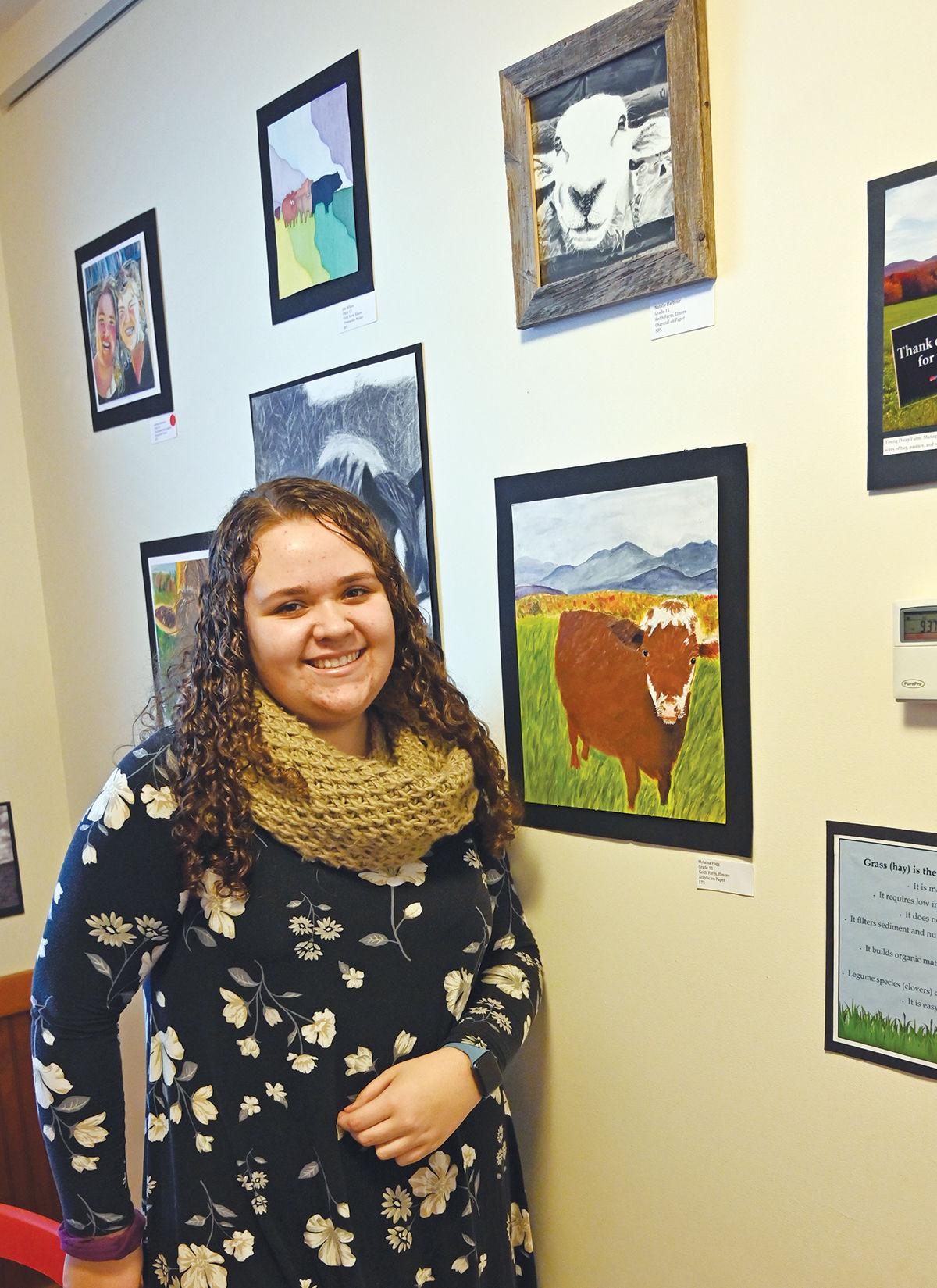 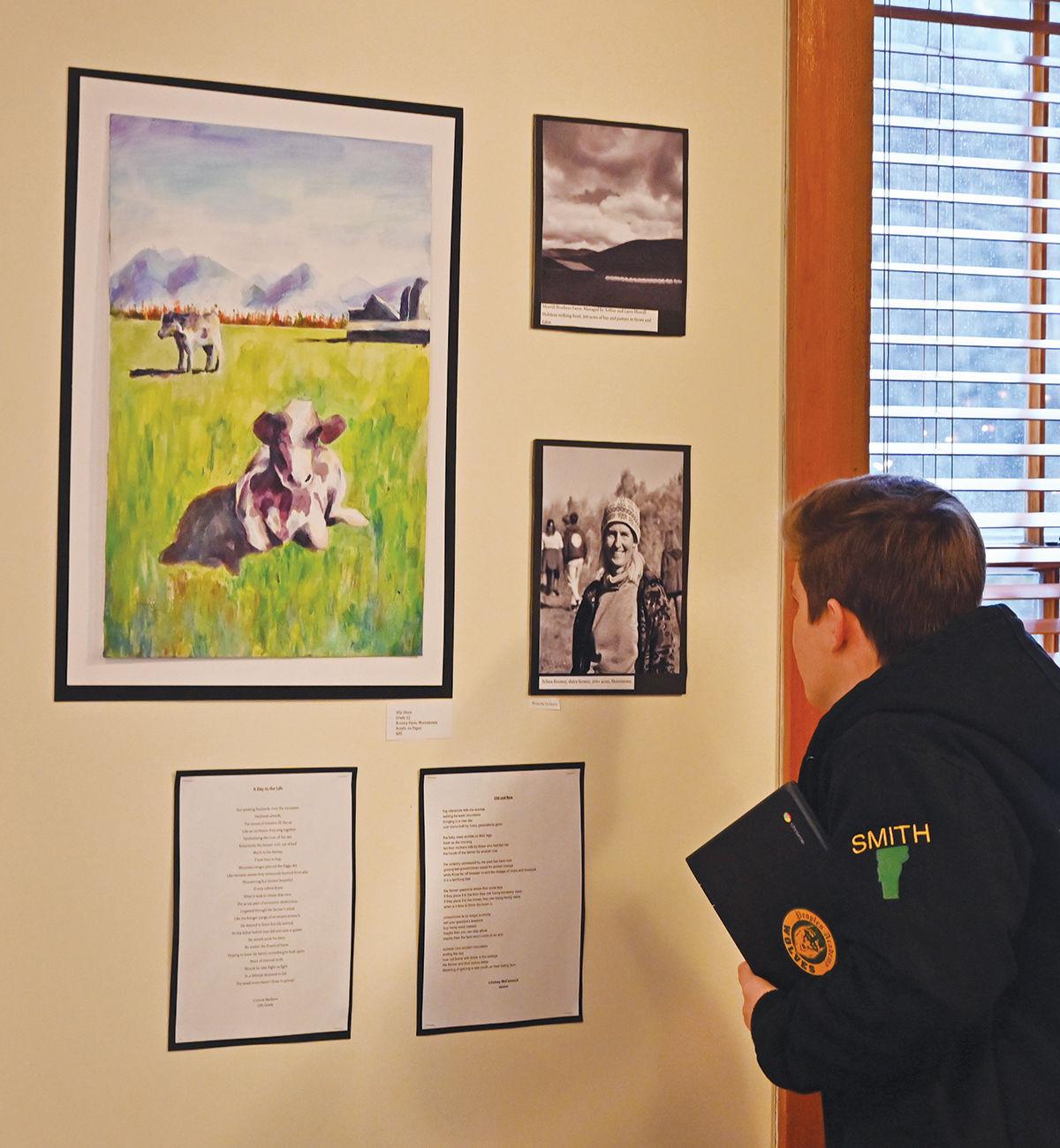 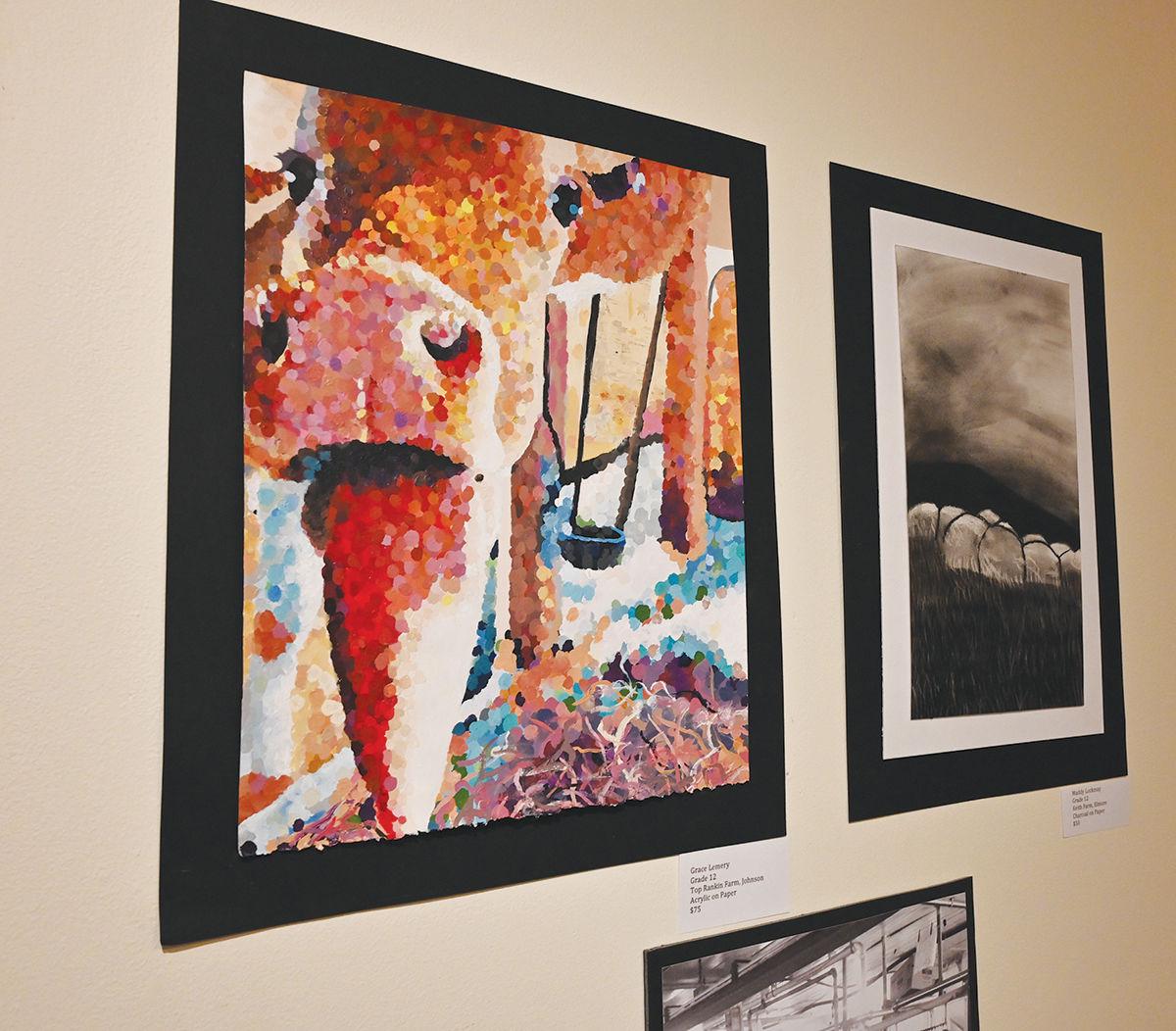 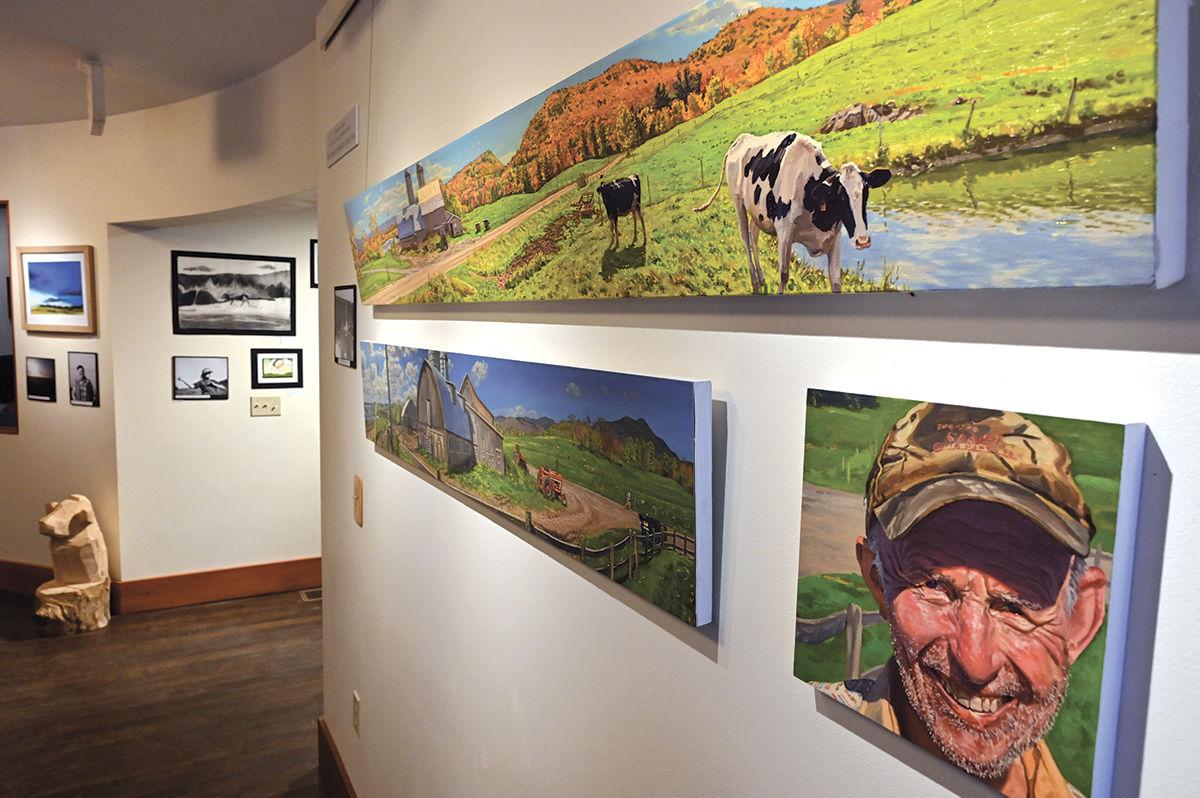 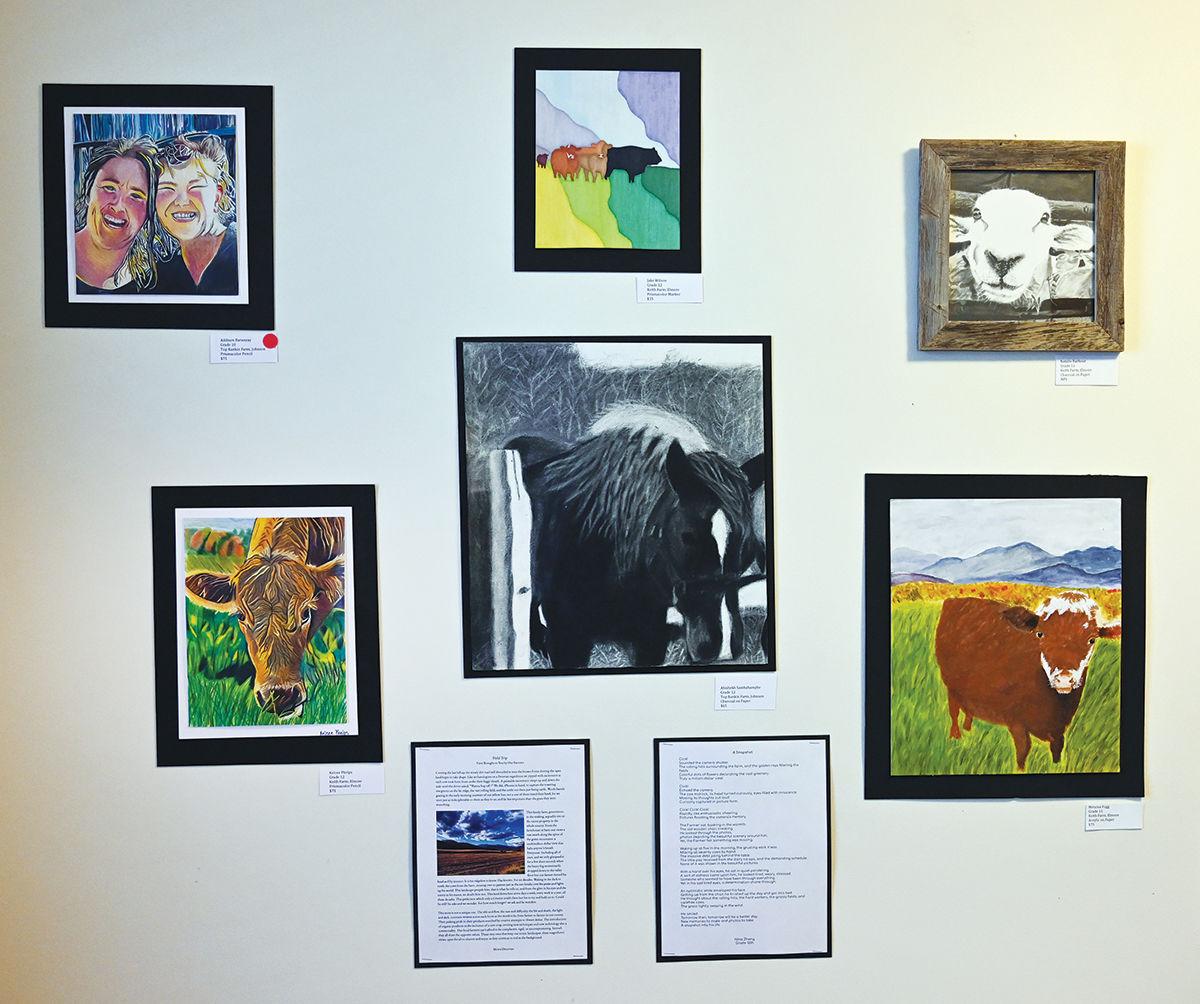 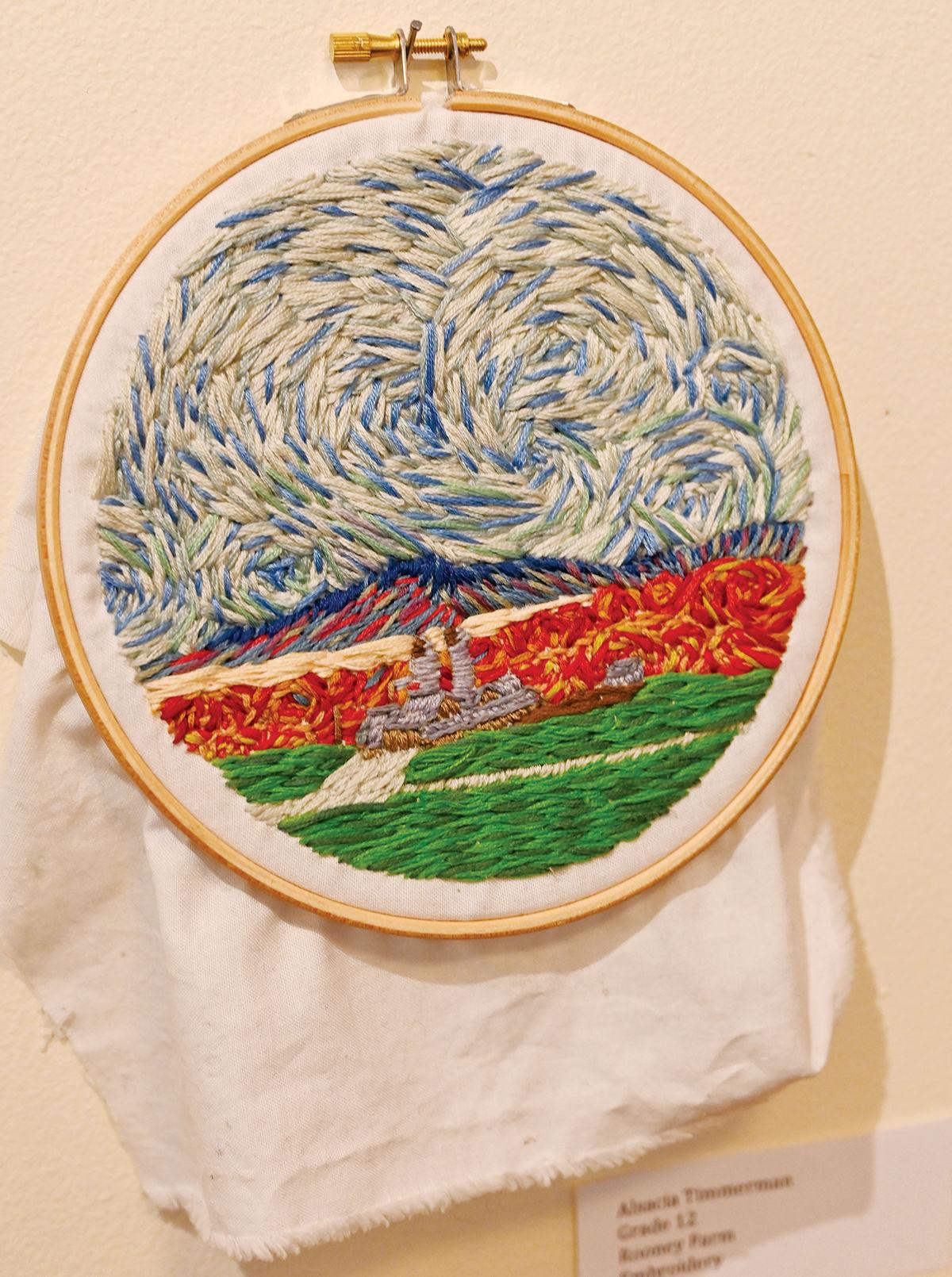 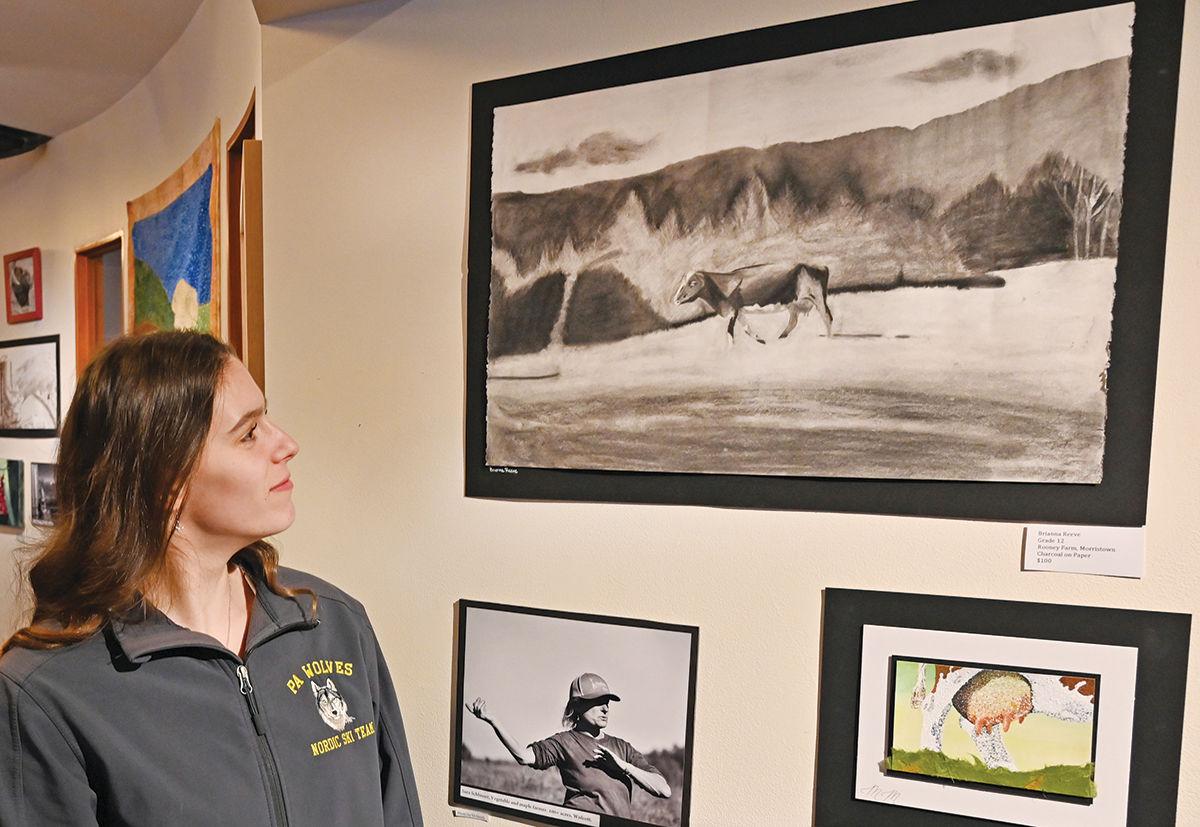 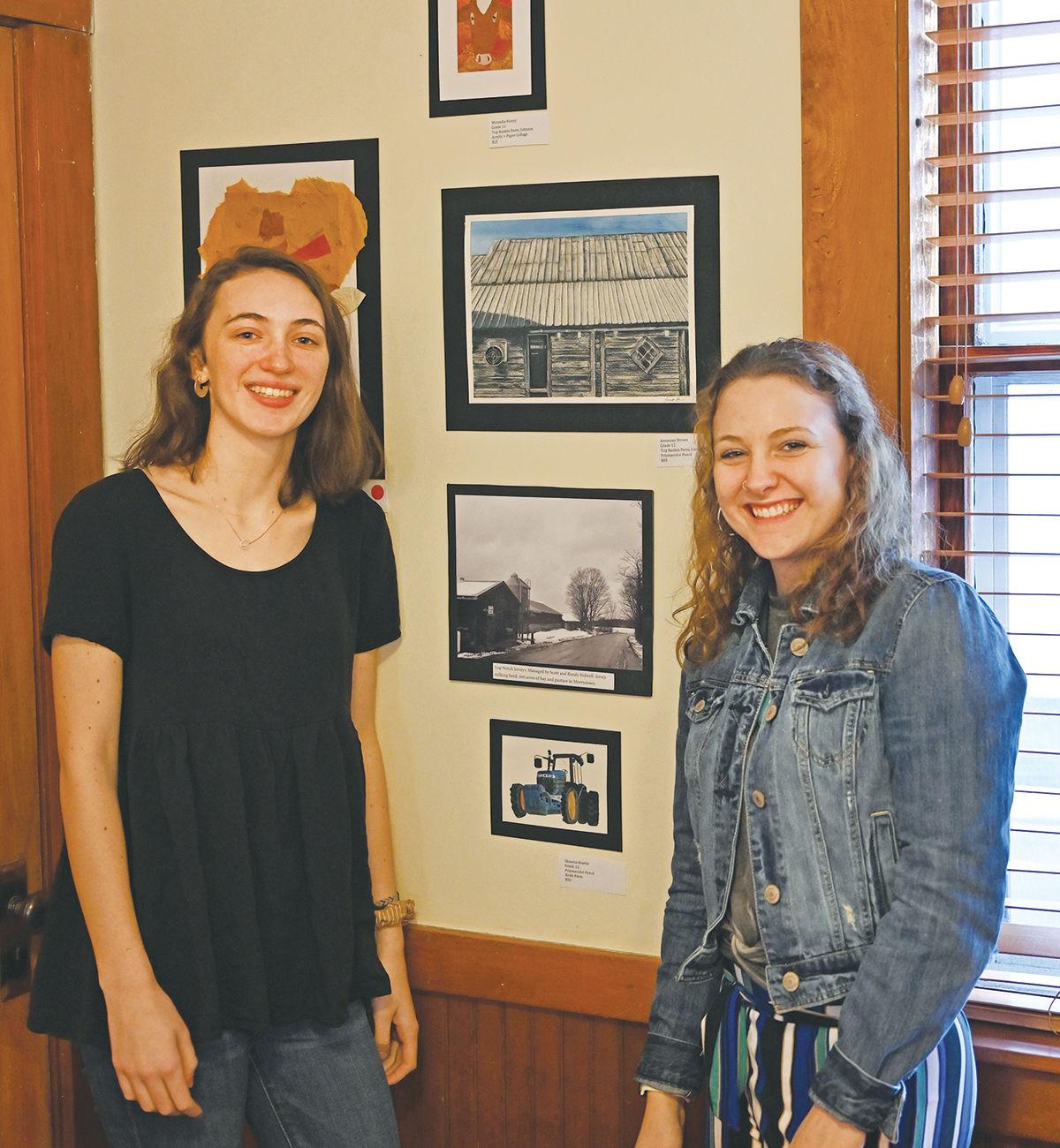 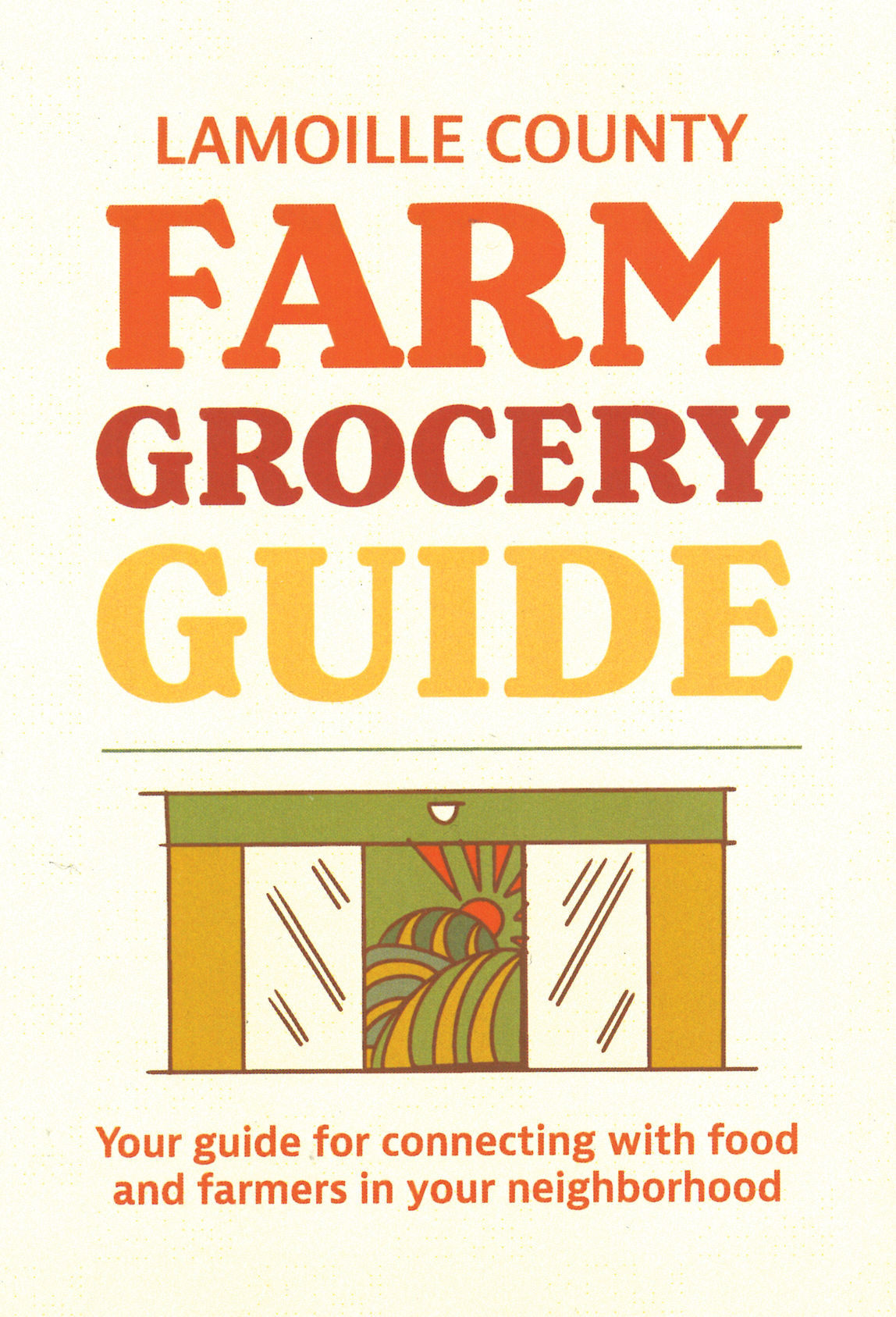 More than 30 students from Peoples Academy teamed up with two local artists, Jennifer Hubbard and Rett Sturman, to create “Thank Our Farmers for the View,” an exhibit at River Arts in Morrisville that celebrates small local farms, their ongoing struggle and the spectacular Vermont views they create as part of their way of life.

As leaf-peepers cruised Lamoille County last fall, soaking in Vermont’s glorious foliage, they could see small signs on the edges of fields that offer breathtaking vistas: “Thank our farmers for the view!”

That sentiment is the driving force behind an exhibit, and the larger movement it represents, now on display at River Arts in Morrisville. The exhibit, using the sign’s message as its title, showcases work by professional artists Jennifer Hubbard and Rett Sturman, and by more than 30 students in the Peoples Academy advanced art and literature classes.

The exhibit runs until Feb. 25.

“Thank Our Farmers for the View”

Artwork and information available through Feb. 25.

“Thank Our Farmers for the View” is the brainchild of Silene DeCiuces, agriculture outreach coordinator with the Lamoille County Conservation District. DeCiucies put up the signs during foliage season and coordinated the exhibit, which is meant to be much more than an art show focused on farms.

The artists didn’t simply re-create the vistas created by farmers’ work, but also visited several small local farms. DeCiucies used her connections to bring the artists right up close to the action, and the people responsible for it.

“She sold me on the idea and got us excited about participating,” said Selina Rooney, whose family owns Rooney Farm in Morristown.

“I’ve spent so much time on the side of the road, or the edge of properties,” said Hubbard, a native of Hyde Park. “It’s a great way to promote our agricultural landscape. A win-win, and Silene is a natural liaison between the two worlds.

“I was just so excited for that more intimate access,” Hubbard said. “To be able to get right up to the farmhouse, to be able to photograph not from a distance but from right up close.”

A key goal of “Thank Our Farmers for the View” is to help people understand that farmers have opened up some of Vermont’s most spectacular and photogenic landscapes.

DeCiuces hopes that will bring attention to the struggles that small Vermont farms face in trying to survive. Milk prices have been volatile for years, and in some years, farmers have lost money on every gallon they produce. Milk prices have been better lately, but the cost of farm equipment and supplies, evolving environmental regulations and President Donald Trump’s trade wars add more pressure.

Every year, it seems, Vermont loses more farms — 48 last year, according to the Vermont Agency of Agriculture, dropping the number of dairy farms to a total of 677.

“We wanted to get people to think about and appreciate local agriculture on a small scale,” DeCiucies said. “It was meant to thank farmers for what they do and make people think critically about their rural agricultural landscape and understand the consequences of losing that.”

If farms vanish, the landscape will change quickly.

“The land they manage is very beautiful. The green, rolling hills that everyone likes to look at,” DeCiucies said, and people tend to take those views for granted.

“Let’s think about what this means,” she said.

The small, working farms in the exhibit are in many parts of Lamoille County and in many parts of the agricultural industry — dairy, organic produce, beef and other livestock, and maple syrup.

But DeCiucies emphasized that the farms highlighted in the exhibit represent hundreds of other small farms responsible for much of Vermont’s beauty.

After landing a grant to organize the exhibit, DeCiucies reached out to a few professional artists, then to Averill McDowell and Moira Donovan, teachers at Peoples Academy. The idea was to open PA students’ eyes to the deeper meanings of local farms, and through the students to reach more members of the community. Then, DeCiucies used her connections to arrange artist visits to local farms.

“As an artist, I take so much inspiration from this kind of subject matter,” Hubbard said. But many artists are hesitant to approach farmers about getting better access.

“Silene recognized the need for this type of connection. It was a wonderful, brilliant idea,” Hubbard said. “Farmers are bound to the land in their way, and artists aren’t connecting with them.”

She hopes to work with DeCiuces to visit more farms to get that up-close access.

The exhibit includes art and information about a multitude of farms.

Hubbard’s main piece focuses on Top Rankin Farm, which she caught just as the morning sun was illuminating the farmhouse.

Peoples Academy students focused on results of their visits to Top Rankin, Rooney, Sandiwood and Keith farms. Their art covers a range of mediums — charcoal, acrylic, prismacolor marker and pencil, paper collage, pen and ink, embroidery, photography and even chain-saw carvings. The art is eye-opening, and students said their experiences were, too.

“I really learned a lot from the trip,” said PA senior Eli Smith, including a better understanding of difficulties that farmers face in staying afloat.

Shawna Beattie agreed, but those struggles are “hidden away from us.”

“Those struggles can be messy, but everything they do is completely gorgeous,” Madeline Moffet said. Her art project became more meaningful when she understood it represented a real person’s livelihood and lifestyle.

“We got to show the real nitty-gritty bits of the Green Mountain State,” Madeline said.

“I didn’t realize how much farmland is around here, and how much it impacts our landscape,” Annamay Brown said.

“You really don’t understand and feel that struggle until visiting,” Brianna Reeve said.

“Thank Our Farmers for the View,” both the foliage signs and the River Arts exhibit, are having an effect.

“Since Silene put the signs up, we’ve had people stopping and saying thank you,” Rooney said. “That’s great, a real benefit to us. It’s increased people’s awareness of farms, and what they do.”

“In reality, it’s not always going to be there if we don’t protect it,” Rooney said.

Rooney already knew many of the students who visited her farm and since then, many students and their families have reached out about buying syrup and other products from the Rooneys.

“We only get our milk and syrup from Selina now,” Eli Smith said. “Now we know we need to support our local farmers.”

“I think that’s the biggest takeaway, supporting local farms,” Rooney said. But, she was also blown away by the artwork at the exhibit.

“I was amazed at how incredible the art projects were,” she said. “Kids had done everything from photography to painting to cross-stitch to poetry. They really got a good understanding of the farms in our area, and the need for them to stay in our area.”

The exhibit drew a crowd when it opened early last month.

“There were people out the door,” said McDowell, the PA teacher.

“It was insane,” Eli Smith said. Many of the farmers were at the opening, and they and the students were the centers of attention.

“Seeing the farmers feel truly appreciated, I don’t think they feel that on a daily basis,” Madeline Moffett said.

“I don’t think we realized during the project we were honoring farmers as much as we were,” McDowell said. By the time the exhibit opened, it “wasn’t about art pieces anymore; it was about honoring farmers and our community.”

“Thank Our Farmers for the View” will be on view at River Arts through Feb. 25. Because the exhibit has been so popular, DeCiucies is talking with other organizations about reopening it later this year at a different location.

In addition, pamphlets listing local farms that offer products directly to consumers will soon be available. Anyone interested in the pamphlets can email DeCiucies at lccd.agoutreach@gmail.com.

Three seats on the Morristown Select Board will be up for grabs when voters head to the polls on Town Meeting Day, March 3.