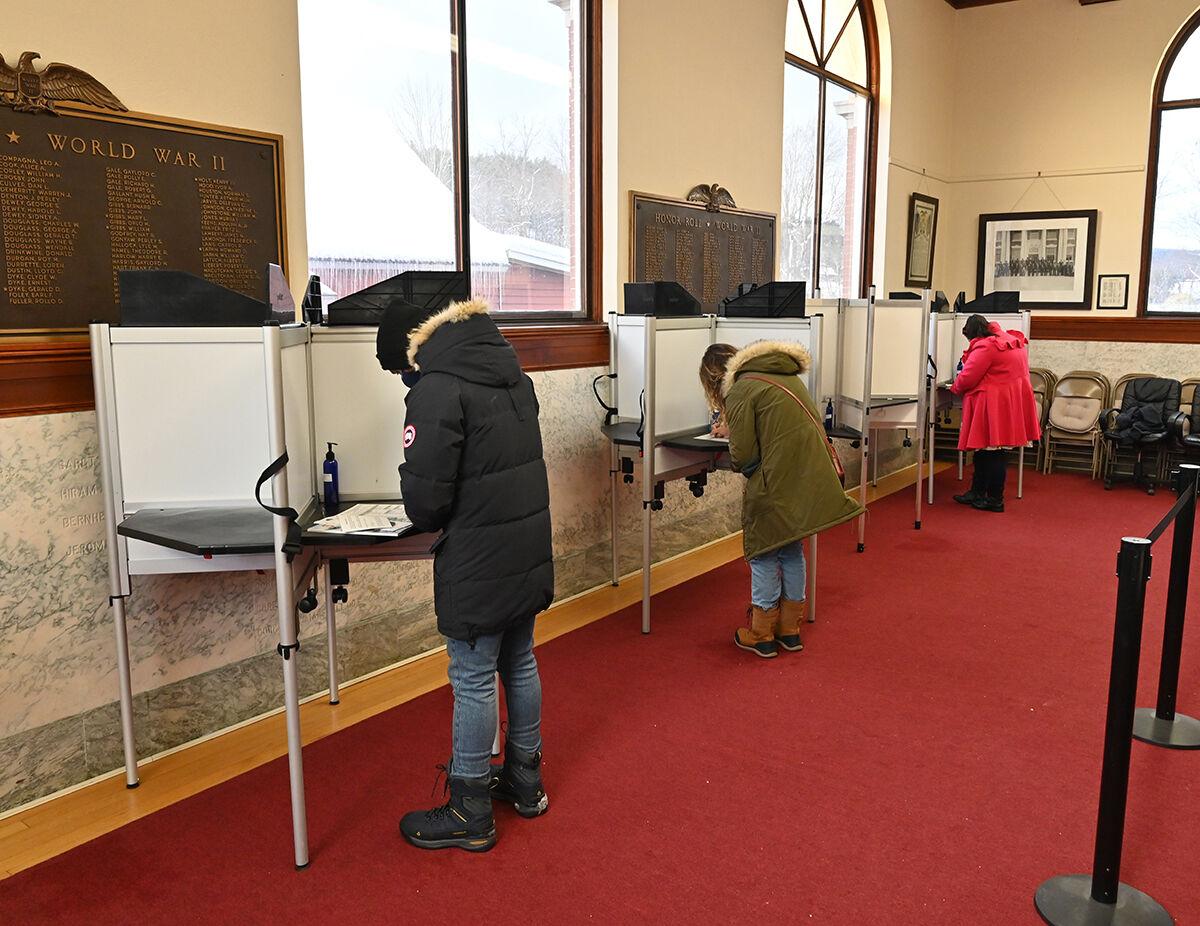 Voters socially distance at the polls in Stowe on Election Day, Nov. 3, in the Akeley Memorial Building. Like most of the county — and state and nation — Stowe saw large numbers of voters cast ballots. 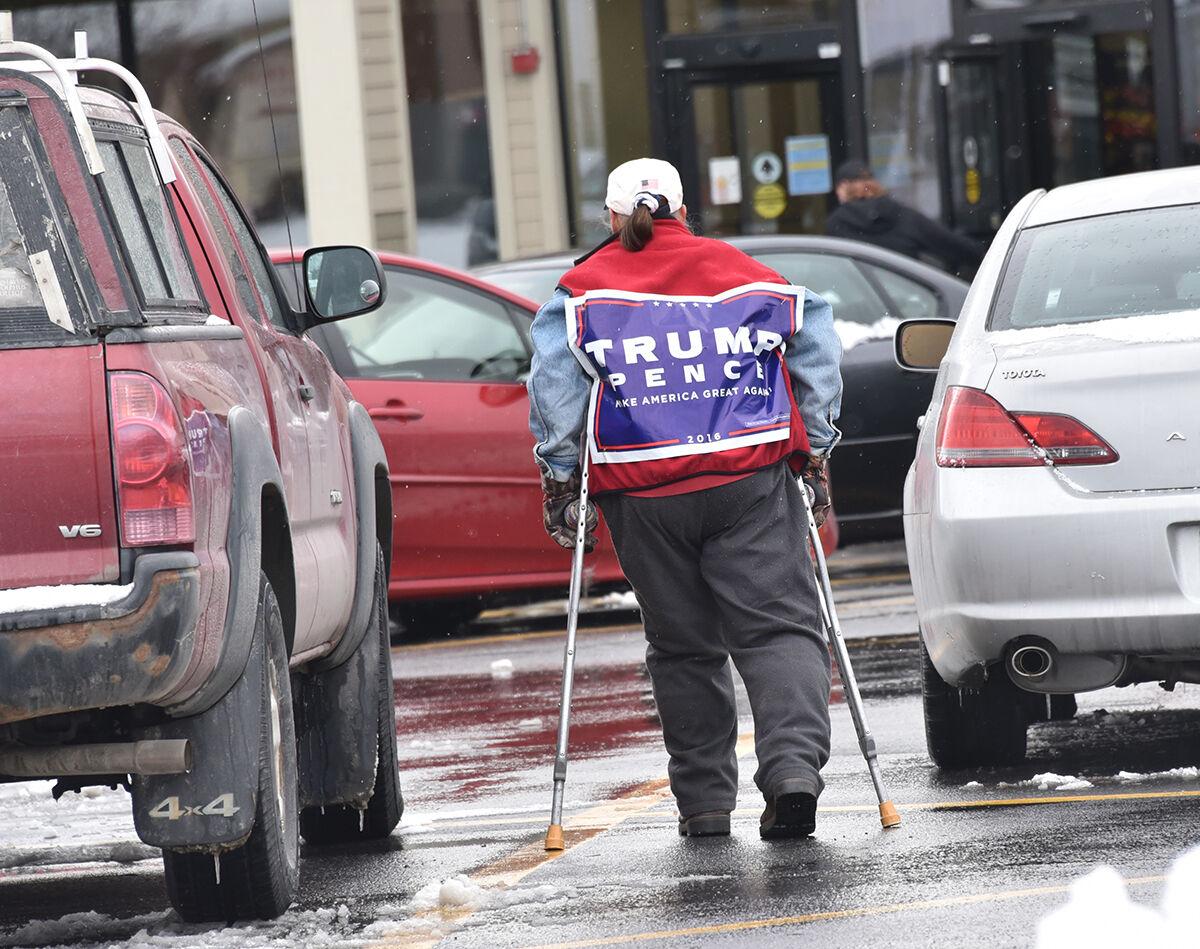 Jinny Bogni-Lemay, of Johnson, heads to the polls on General Election Day, Nov. 3, leaving little doubt as to where her support lies.

Voters socially distance at the polls in Stowe on Election Day, Nov. 3, in the Akeley Memorial Building. Like most of the county — and state and nation — Stowe saw large numbers of voters cast ballots.

Jinny Bogni-Lemay, of Johnson, heads to the polls on General Election Day, Nov. 3, leaving little doubt as to where her support lies.

Accusations and claims of voter fraud, so far thought to be false, have become commonplace across the country in the national news, but at a state and local level there don’t seem to be any worries about anything like that.

“No, nothing at all,” Morristown Town Clerk Sara Haskins said.

Stowe town clerk Lisa Walker said while Vermont got its vote counting almost entirely wrapped up by the end of election night, she feels for poll workers in cities like Philadelphia, working long hours for days after the election.

“I could not imagine having to do what poll workers in other cities are doing, just knowing that everyone’s sitting on pins and needles, waiting to see what happens,” she said.

Mark Schilling, Cambridge’s town clerk, was heartened by support from on high.

One of the main issues with early voting during the August primary was voters improperly returning their ballots — forgetting to sign the certificate or not returning un-voted ballots. That wasn’t nearly as much of a problem come November, Haskins said, even with so many more people voting early or absentee and record-breaking turnout.

“Nothing like before, during the primary,” she said. Only 18 of Morristown’s ballots were deemed defective.

“Mostly people forgot to sign the certificate,” she said, although a few people also forgot to actually put their voted ballot in said certificate.

In Johnson, Audibert only had four defective ballots.

Haskins said she hasn’t heard of any other clerks in Vermont experiencing major problems. Everyone has been busy since the election, confirming results, but “I’m sure if there had been something major we would have heard about it,” Haskins said last Thursday.

“I have not heard of anything, no issues across the state,” Audibert said.

Haskins added that the Vermont Secretary of State’s office did a great job in the days leading up to the election and they were also a valuable tool during voting. Several new voters showed up at the polls in Morristown hoping to register, and she said it was a simple matter of logging on to the Secretary of State’s website to confirm the person wasn’t still registered and/or hadn’t voted somewhere else.

“When we put a new voter in, we can tell if they’ve already voted in another town,” Audibert said.

Haskins said that she and her staff registered 21 new voters in Morristown on Election Day and had registered 150 in the month leading up to it.

“No irregularities with any of that,” she said. Sometimes, the Department of Motor Vehicles sends voter registration information that she and her staff question; that typically involves a voter’s current address, but that’s easily resolved in a small town like Morristown where the clerks know almost everyone.

Audibert said that she and her staff did receive four mail-in ballots from unknown people who weren’t on the checklist, but those simply went into the small “do not use” pile.

“They came in an envelope, they didn’t have the certificate and we didn’t know who they were from, so we didn’t use them,” she said.

Schilling didn’t anticipate any shenanigans going into Cambridge’s Election Day, and was not surprised there were not any. Well, there was the one man who came into the polling place wearing a plain face mask and then cleverly swapped it out for one with a candidate’s name on it.

“We had to disapprove of that,” Schilling said. He wouldn’t say which candidate it was, but emphasized it wasn’t anyone local or statewide.

“No, it was national,” he chuckled.

Cambridge boosted its staffing levels in anticipation of some voters having to fill out affidavits saying they hadn’t received a ballot or had filled it out wrong and needed a new one.

“I cannot thank my staff enough,” Schilling said. These people basically put themselves at some risk, and rather than shy away, I had half a dozen residents step up, first time election workers that we didn’t have before.”

Stowe’s Walker said it was “probably one of the smoothest elections we’ve had, with the best turnout.” She echoed Schilling’s confidence about Town Meeting Day.

“I’m very confident that whatever is thrown at us, we will make a plan, and it will, more than likely, go smoothly,” she said.

Voters in Lamoille County who had not joined the thousands of people who cast early ballots braved cold wind and snow Tuesday, a day that rese…