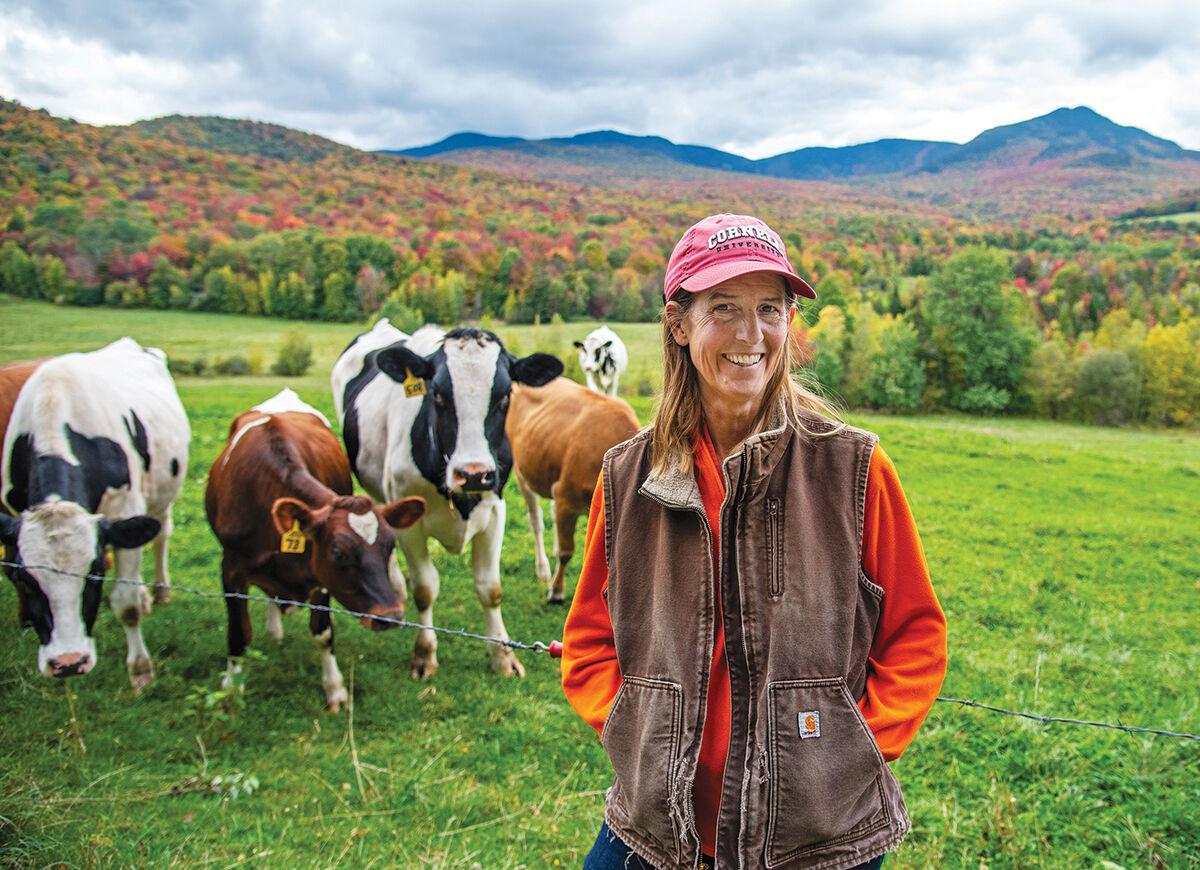 Selina Rooney, part of the family that runs the Rooney Farm in Morristown’s Mud City area, with some of the farm’s cows. The farm is one of 27 Vermont dairy farms that recently received notification that Horizon Organic will no longer buy milk from them at the end of next summer. 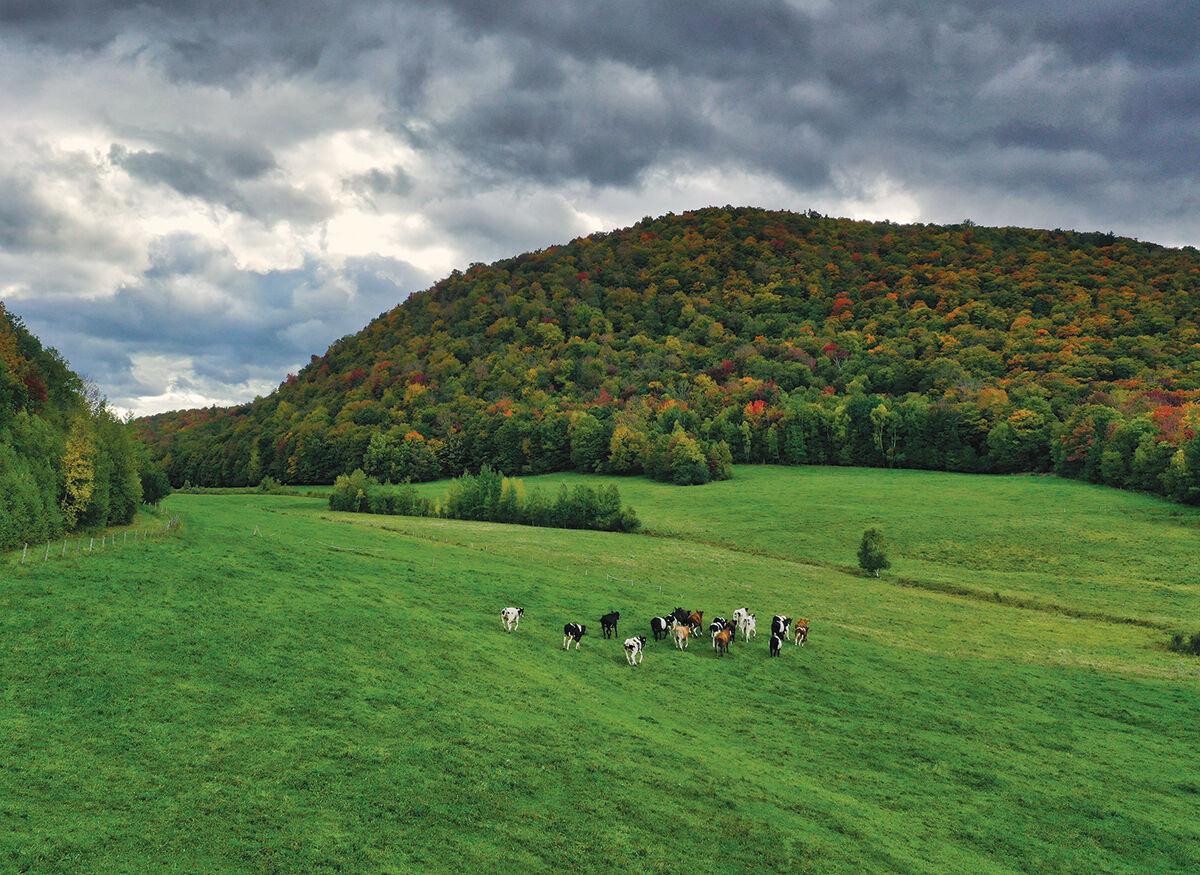 The Rooney Farm in Morristown’s Mud City. Its hilly geography lends itself to picturesque views and limits the number of cows the farm can pasture.

Selina Rooney, part of the family that runs the Rooney Farm in Morristown’s Mud City area, with some of the farm’s cows. The farm is one of 27 Vermont dairy farms that recently received notification that Horizon Organic will no longer buy milk from them at the end of next summer.

The Rooney Farm in Morristown’s Mud City. Its hilly geography lends itself to picturesque views and limits the number of cows the farm can pasture.

The Rooney Farm in the Mud City area of Morristown milks a herd of 50 carefully curated cows, with ubiquitous Holsteins for a reliable base and a mix of Ayrshires, Jerseys, Guernseys and Norwegian Reds to add better butter content and lower bacteria counts — quality measures that fetch a higher price from the buyer.

That buyer, Horizon Organic, is now cutting ties with the Vermont milk market by the end of next summer, leaving the Rooneys, and the operators of 26 other Vermont farms struggling to see what’s over the horizon.

“This was a total shock to us,” Selina Rooney said. “We have nobody to take our milk after August 31. Every person we’ve talked to has said no.”

The August announcement was made by Horizon’s parent company, the global food brand Danone, which sent letters to 89 farms in Vermont, New Hampshire, Maine and parts of New York.

The rationale is that Colorado-based Horizon needs to buy its milk in bulk and wants to reduce its carbon footprint. Why make repeated truck routes to small New England farms that measure their herds in the hundreds or smaller — Rooney Farm’s picturesque hills geographically limit the herd to about 50 — when they can get milk from much larger farms in the Midwest and Texas, places with herds of 15,000-20,000 cows?

Rooney’s father David runs the farm — she and her mother Charlee are “his full-time help,” she noted in an email — but she is educated and invested in, and opinionated about, the organic dairy business. She’s part of a task force formed by Anson Tebbetts, secretary of the Vermont Agency of Agriculture, Food and Markets, to look for solutions to the problem.

The task force hopes “to provide as many possible options for the impacted farmers” as it can by January or February, which it hopes will give the impacted farms time to figure out what works for them.

“The task force is focused on giving the best information possible to the farmer so they can make informed decisions about their business,” Tebbetts said.

Some of those options include finding another organic buyer, finding a processor interested in expanding production, switching to goat’s milk, if there’s demand, or diversifying into other livestock or crops.

Rooney noted that Lamoille County’s largest milk producers have already sold their cows — one of them, Joneslan Farm in Hyde Park, went from 420 milking cows to 600-700 goats last year, with plans to expand that herd to about 1,500.

To save its 150-year-old farm, Hyde Park family turns to goats

The Rooney Farm, started by Selina’s grandfather, plans to start hosting on-farm weddings next year. But that’s meant to help complement the farming operation, not completely supplant it, Rooney said.

“We would love to sell to a cheesemaker or ice cream maker, but our days are already filled,” she said.

Even if they could, they can’t. At least not now, according to Silene Sutera, the farm business planner at the Hardwick-based Center for an Agricultural Economy.

“These farmers, who only have a year on their contract with Horizon, cannot ship their milk anywhere, even if they wanted to sell to a cheesemaker or sell raw milk,” Sutera said. “It’s just crazy.”

For farmers already invested in commodity liquid milk production, finding a new buyer is the most logical route.

According to notes from the Oct. 8 meeting of the task force — the agriculture agency has an entire portion of its website dedicated to the group’s work — “the feedback from many of the farms is that they are hoping that one buyer comes forward that can take on all the milk.”

Organic Valley and Stonyfield are the most natural choices, since they already have a strong presence in Vermont. The problem, however, is they are already at full capacity, and aren’t buying any more milk.

Nicole Dehne, certification director with the Northeast Organic Farming Association of Vermont, said Stonyfield and Organic Valley will likely announce soon whether they can pick up any of the dropped producers.

“I think many people would like to see Organic Valley or Stonyfield pick up these producers and give them regular contracts. In order to do this, it would be great if the state or a private entity could help increase the utilization of this new milk,” Dehne said. “For example, could state colleges and K-12 schools have incentives to purchase local, organic milk or could a private entity step up and collaborate with the buyers to do a private label brand that could then be sold in Boston or New York?”

Rooney said she can’t comment on the contract the farm has with Horizon, and Sutera said it’s best she doesn’t.

Sutera worries that if someone at Horizon — or Danone — even got a whiff that one of its suppliers was bad-mouthing them, they would just cancel the contract right then and there.

She said it happened in Maine a few years ago, a farm tried to sell extra milk above and beyond what it was selling to Horizon, and it voided their contract immediately.

“I can only say that we’re looking at every single place we can,” Rooney said.

Part of the problem, and the solution, lies with the grocery stores. Sutera said that’s because companies negotiate with grocery chains for real estate on the shelves.

Even if the smaller organic milk suppliers could ramp up production, or if a new one came into the game, Danone, with its much deeper pockets, could still demand the shelf space.

But Dehne of the Northeast Organic Farming Association said that perhaps New England grocers won’t take too kindly to a company vacating the area and continue to reward it with shelf space.

“After August 2022, none of the Horizon milk sold in Vermont will be supplied by Vermont producers,” Dehne said. “Vermont consumers strongly support local farms. I think that Price Chopper and Shaw’s will start to feel pressure to stock shelves with product coming from our Vermont organic dairy producers.”

According to a commentary in the September issue of NODPA News (the trade magazine of the Northeast Organic Dairy Producers Alliance), Danone is going big into the plant-based “dairy” sector, acquiring brands over the years such as Silk, So Delicious and Follow Your Heart that make soymilk, almond-based coffee creamer and plant-based cheese spreads.

“Why dump these producers now when the milk market is very tight, and why so many routes at once? The move has almost certainly been planned for a few years and its implementation might have been tied to a change in leadership at Danone International and at Danone North America, a lack of growth in organic dairy, and a renewed commitment to the growth of other ‘milks,’” the commentary reads.

Power of the purse

Danone is classified as a B Corporation, one that is legally bound to balance a social mission with profits. The company has said its commitment to combating climate change is part of the reason, since the truck routes to New England added to many fuel emissions to an industry already targeted for its contributions to climate change and water quality.

But Dehne said part of being a B Corporation is considering the impact to communities, as well as the environment.

“It feels disingenuous that Danone, a B Corporation, made this decision to end these contracts knowing the impact that it will have on 89 family farms in the Northeast,” she said.

Sutera said quality still counts, and that’s partly why farmers got into the organics game in the first place, because it was a way for them to make more money because they had a superior product. Then, that all became commoditized and “really, organic standards have deteriorated.” Still, the “people are really jazzed” about milk, and the Horizon pullout has gotten them thinking about dairy more than ever, she said.

For now, things remain the same, with a truck from Horizon coming to Mud City every other day to come pick up the Rooney Farm milk, at a place so picturesque and hilly there’s no choice but to remain small. The farm gets paid more than some for its milk because of the high butter fat and low bacteria count thanks to the diverse herd.

Whether that’s enough to keep small dairy going remains to be seen.

“If people want small farms in Vermont, they have to buy from small farms,” Rooney said. “The question is, are they willing?”