You are the owner of this article.
Edit Article Add New Article
You have permission to edit this article.
Edit
Home
News
Sports
Opinion
Community
SCENE
Calendar
Special Publications
Marketplace
Classifieds
Contact Us
1 of 13 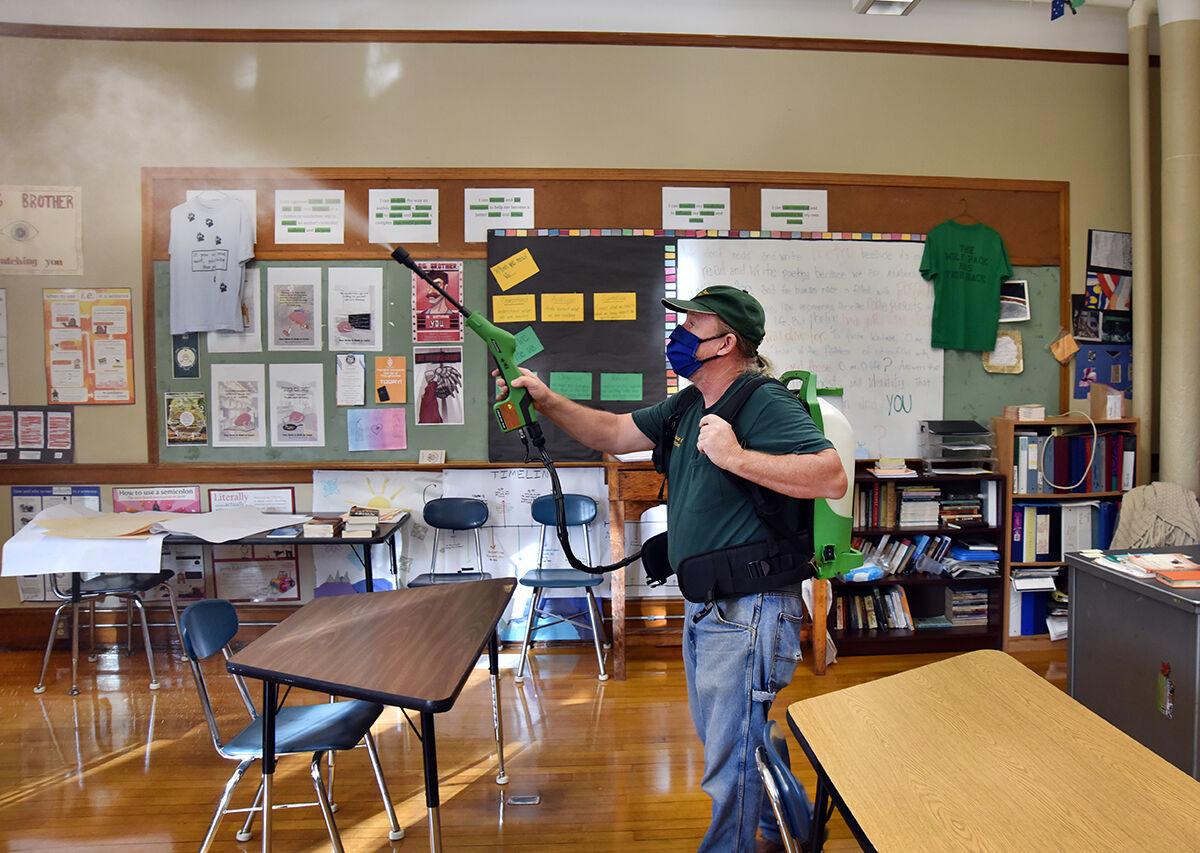 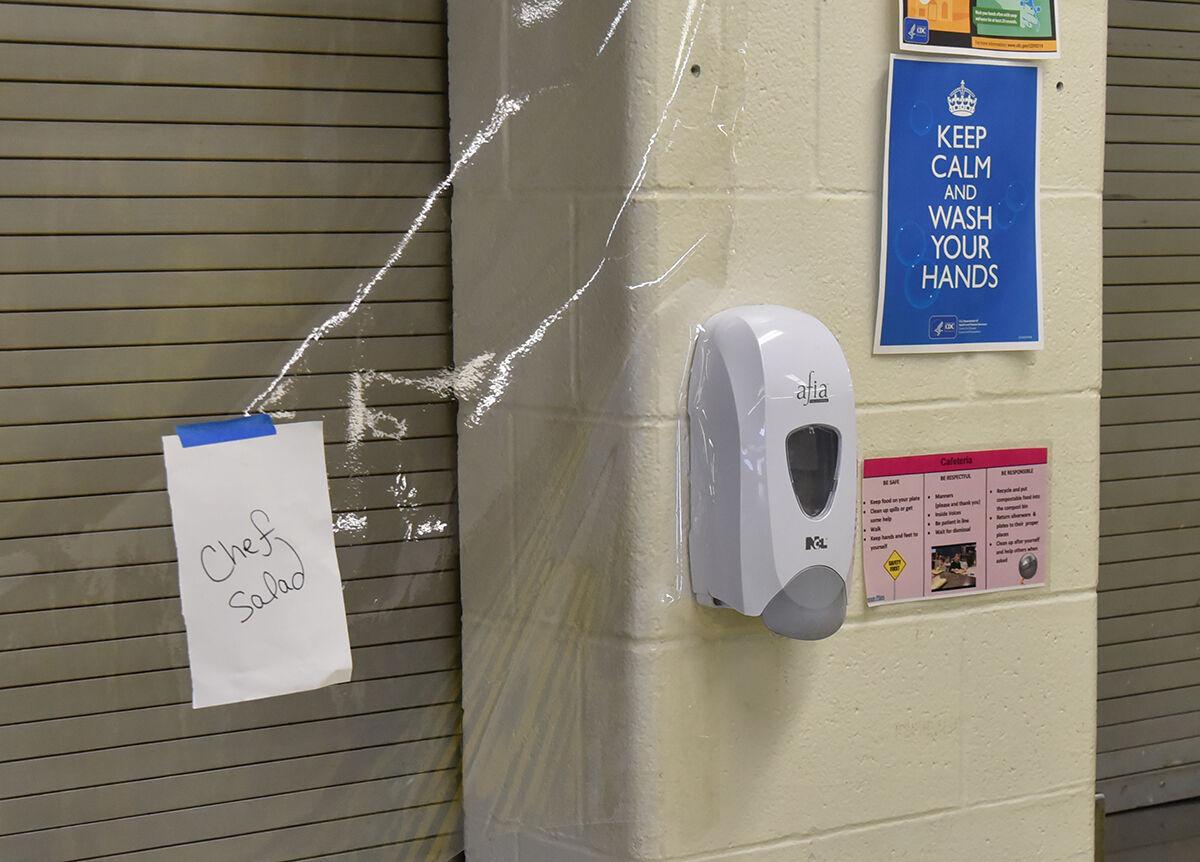 A sign of the times at Peoples Academy, where the efforts to keep the school clean require creativity from the custodial crew. 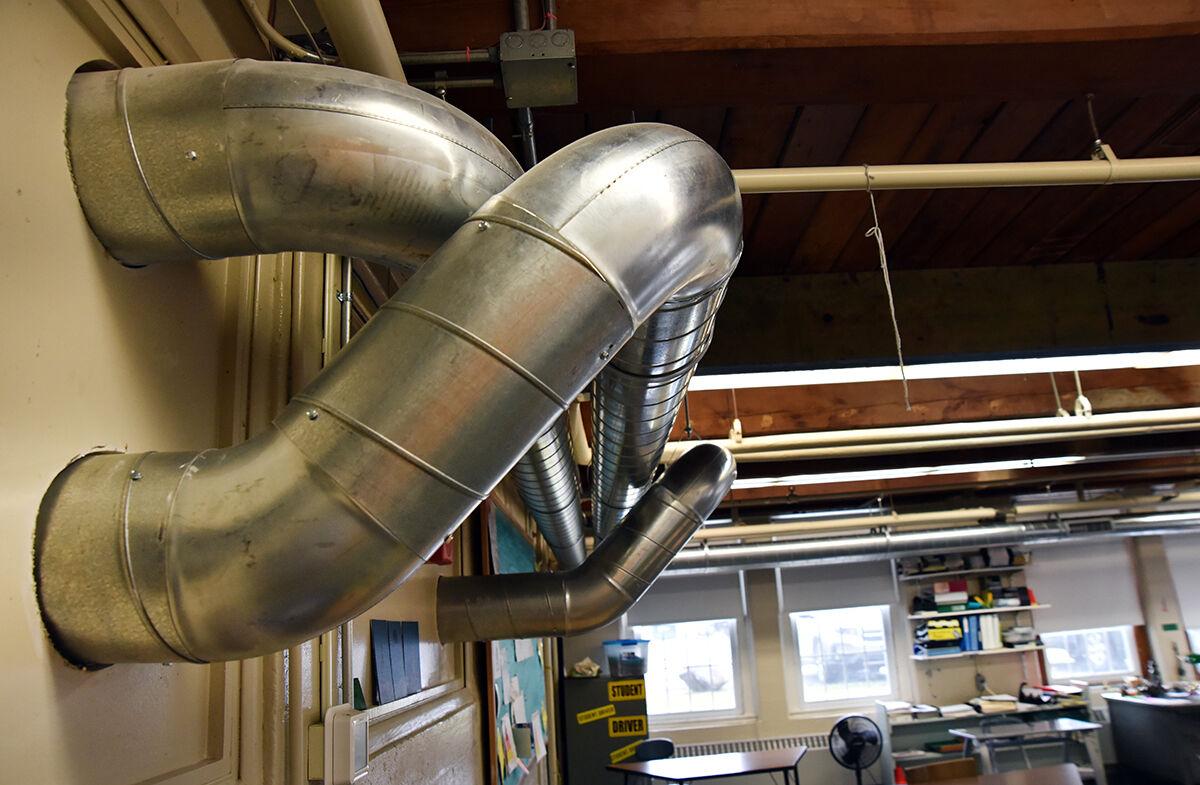 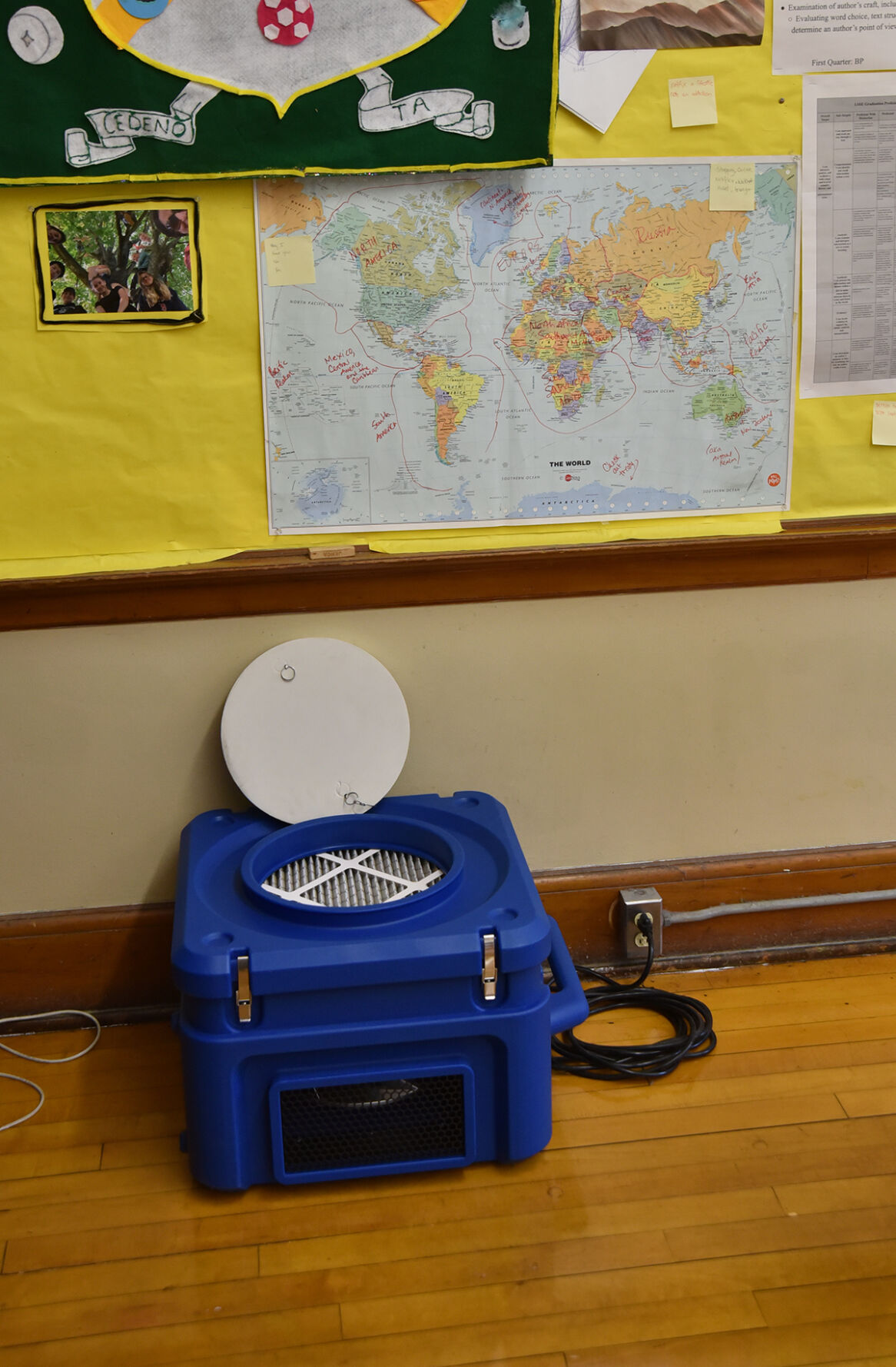 Air scrubbers clean the air in all of the classrooms in the 1927 building. 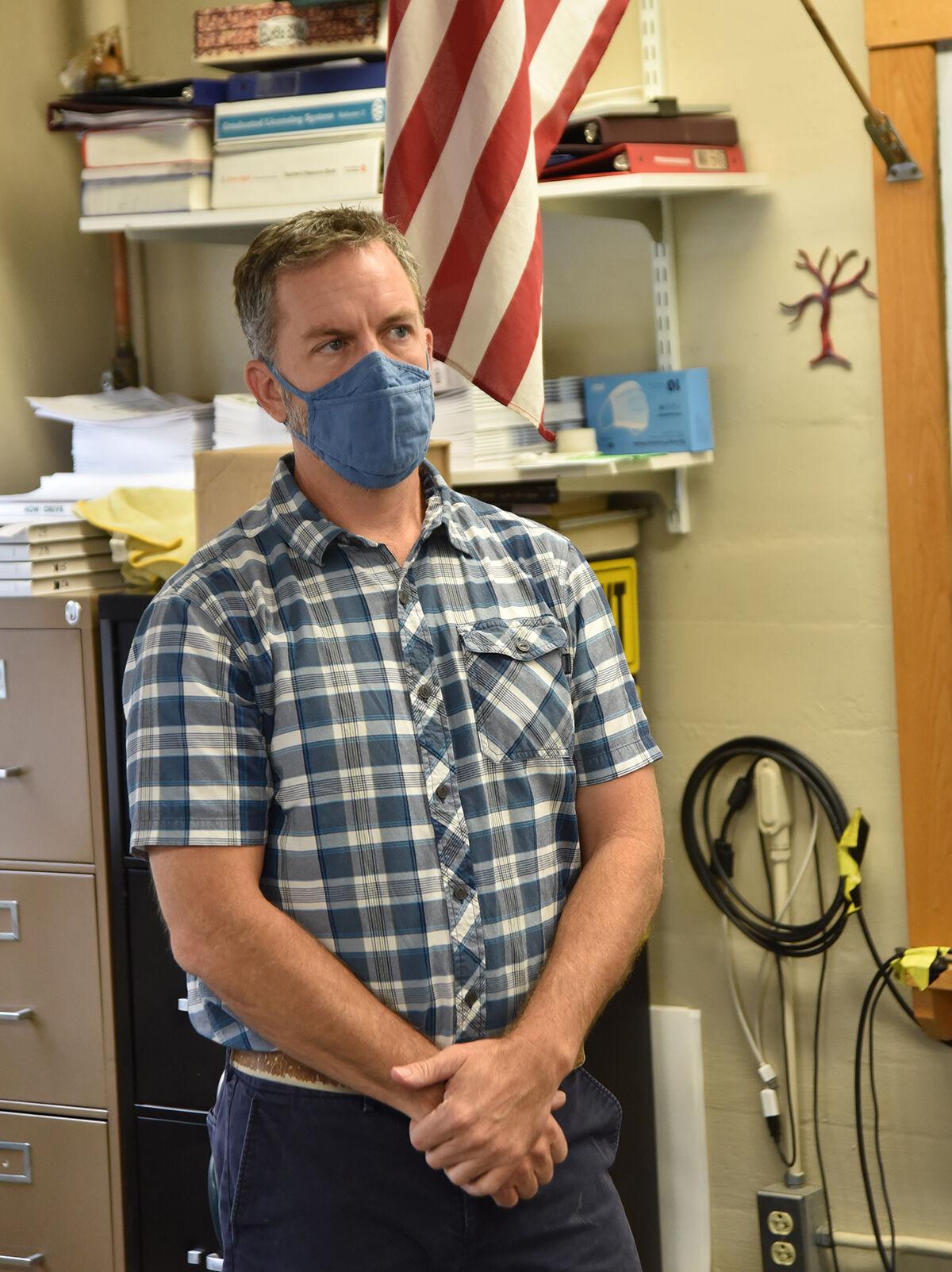 Principal Phil Grant talks about the challenges of cleaning the school during a pandemic. 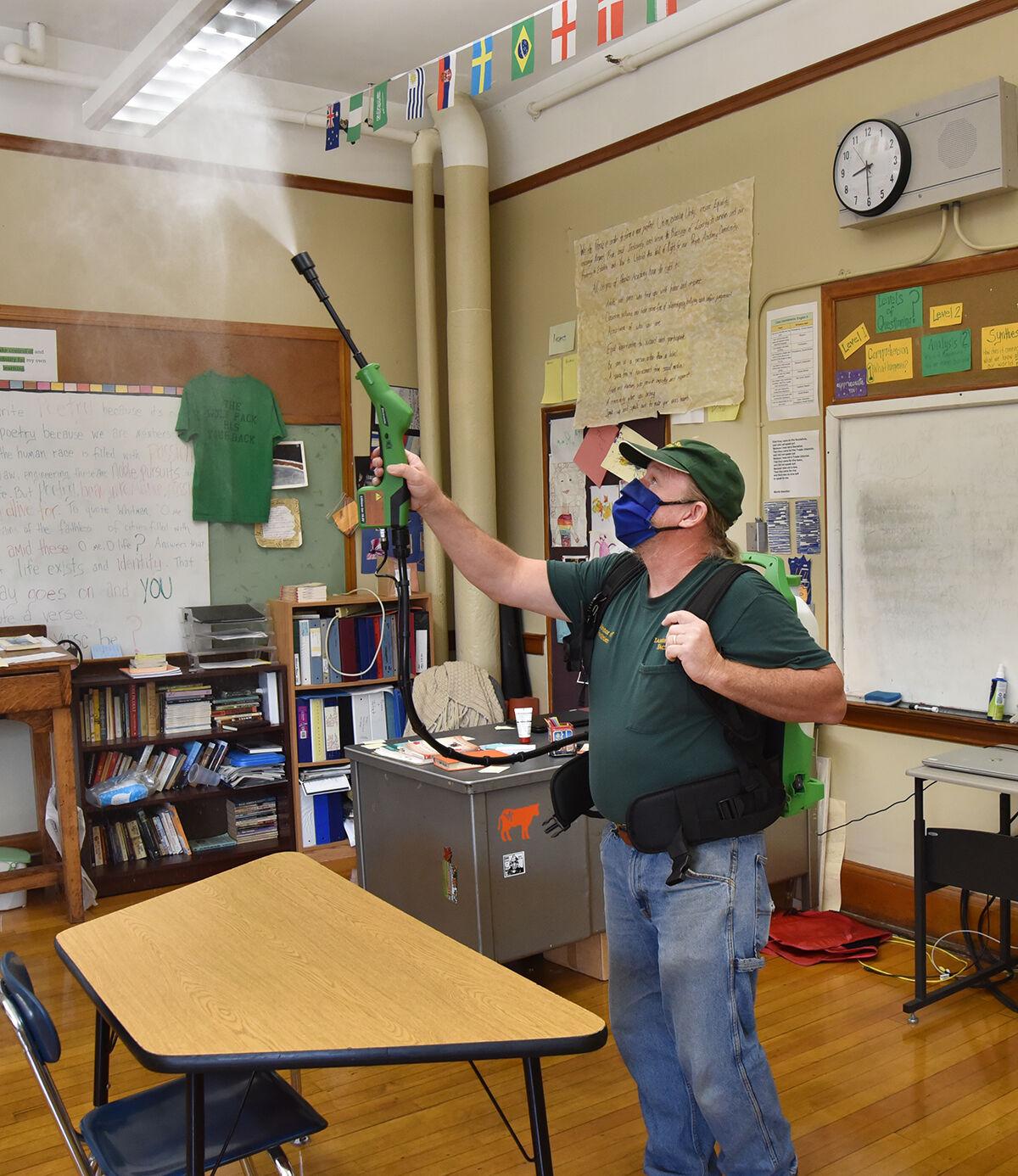 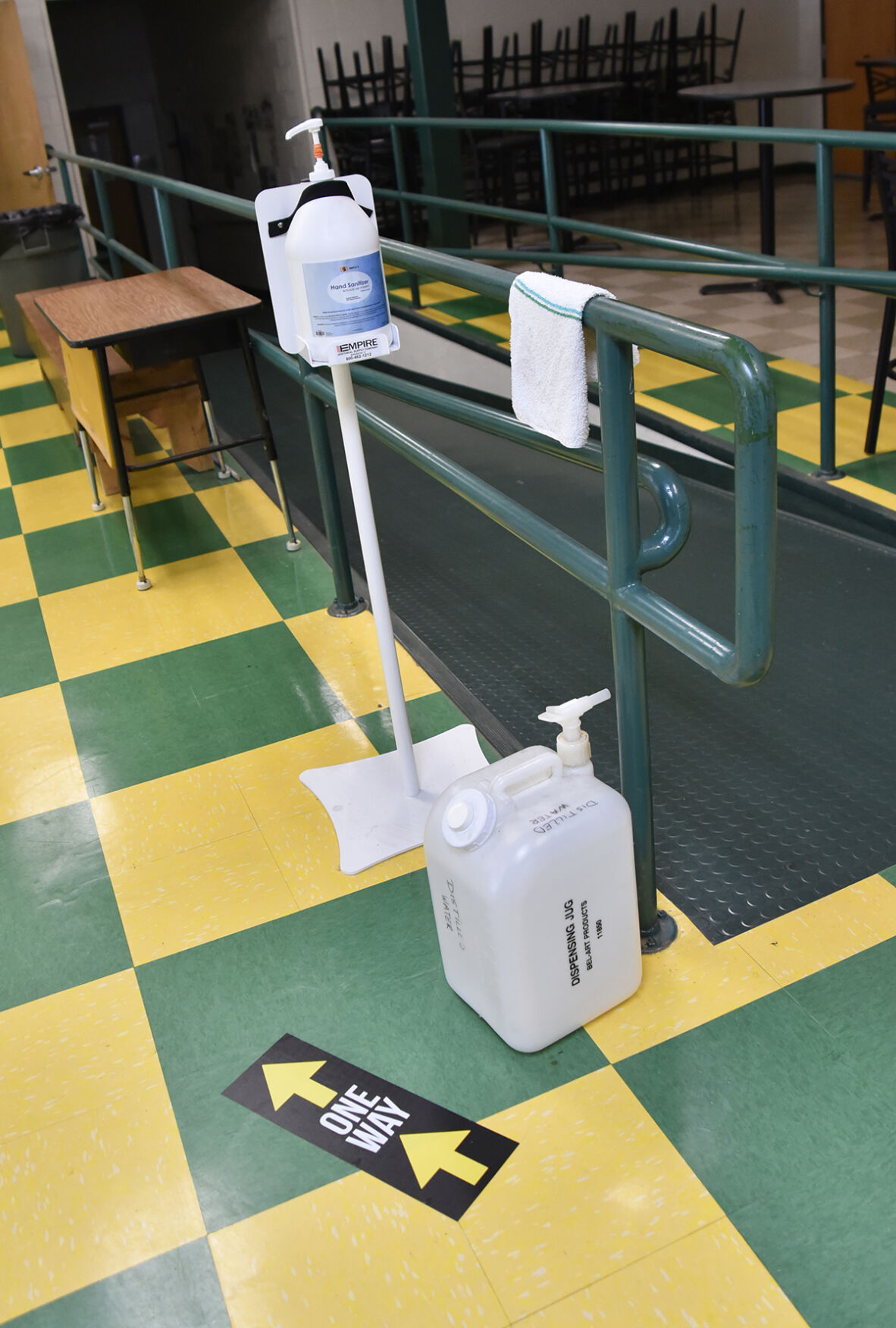 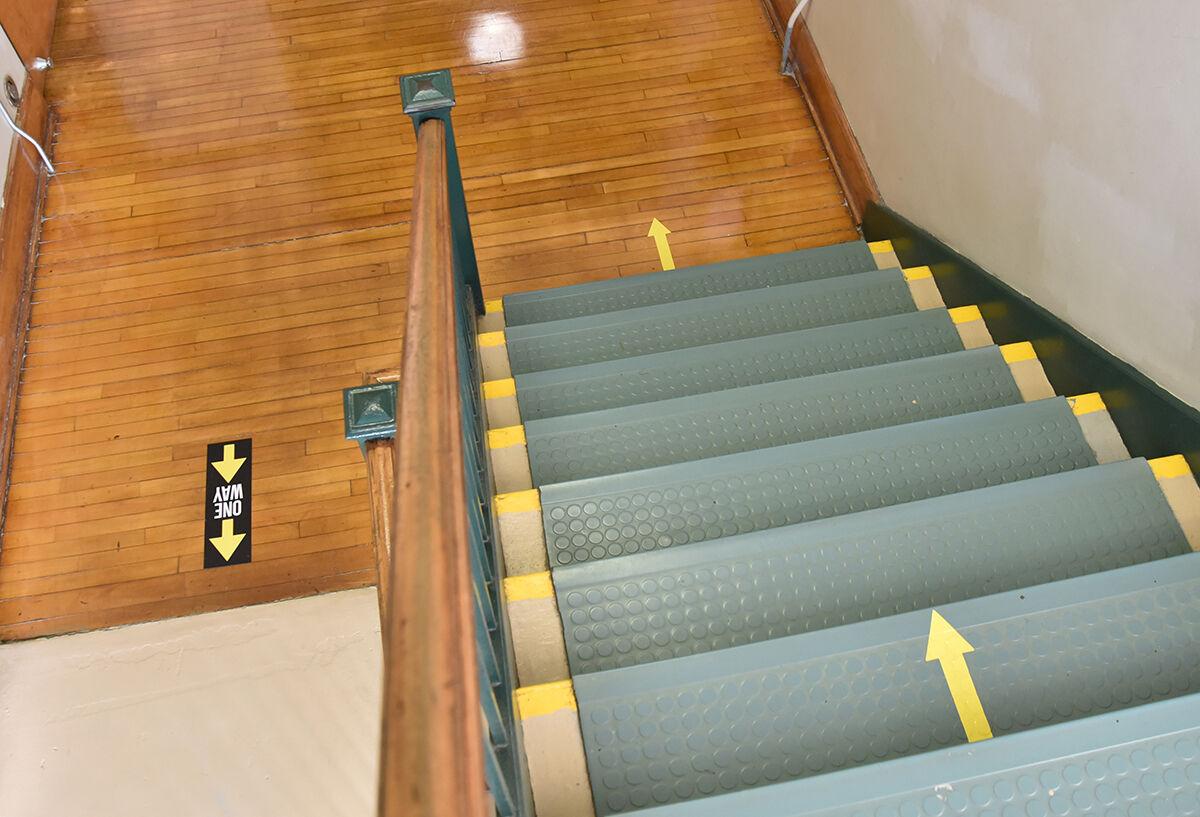 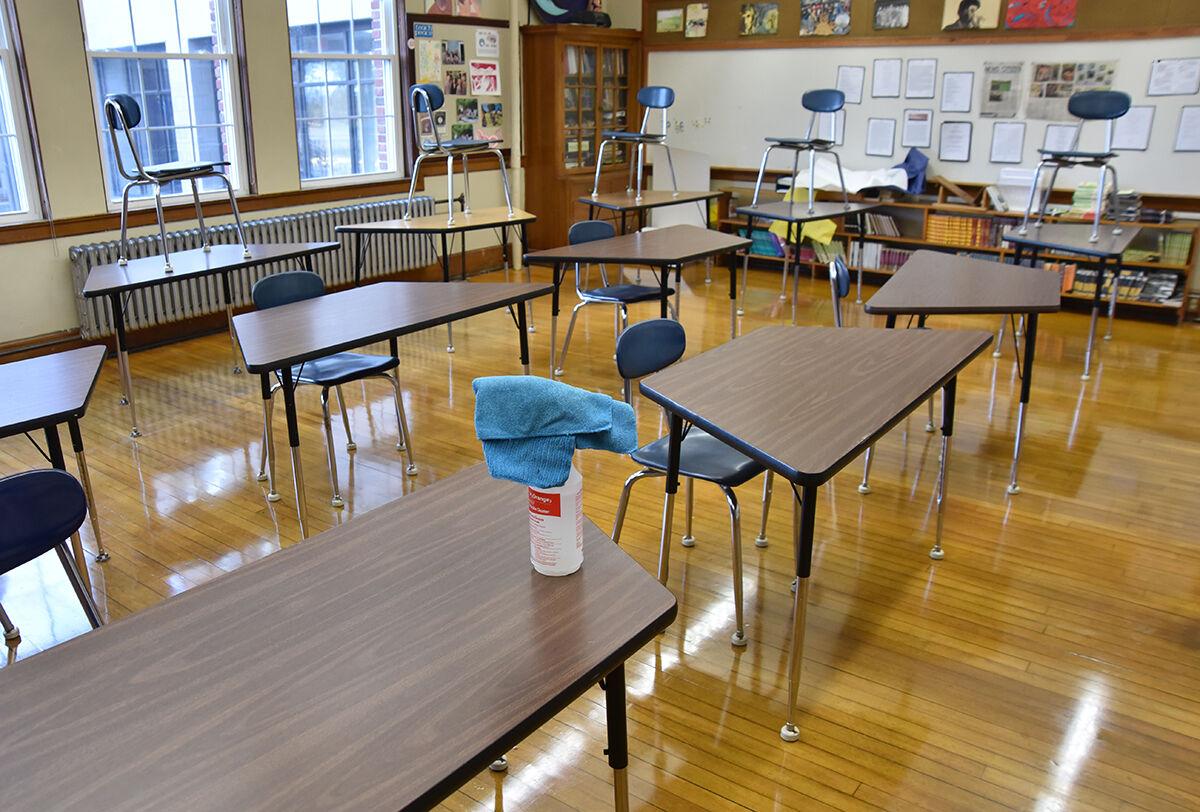 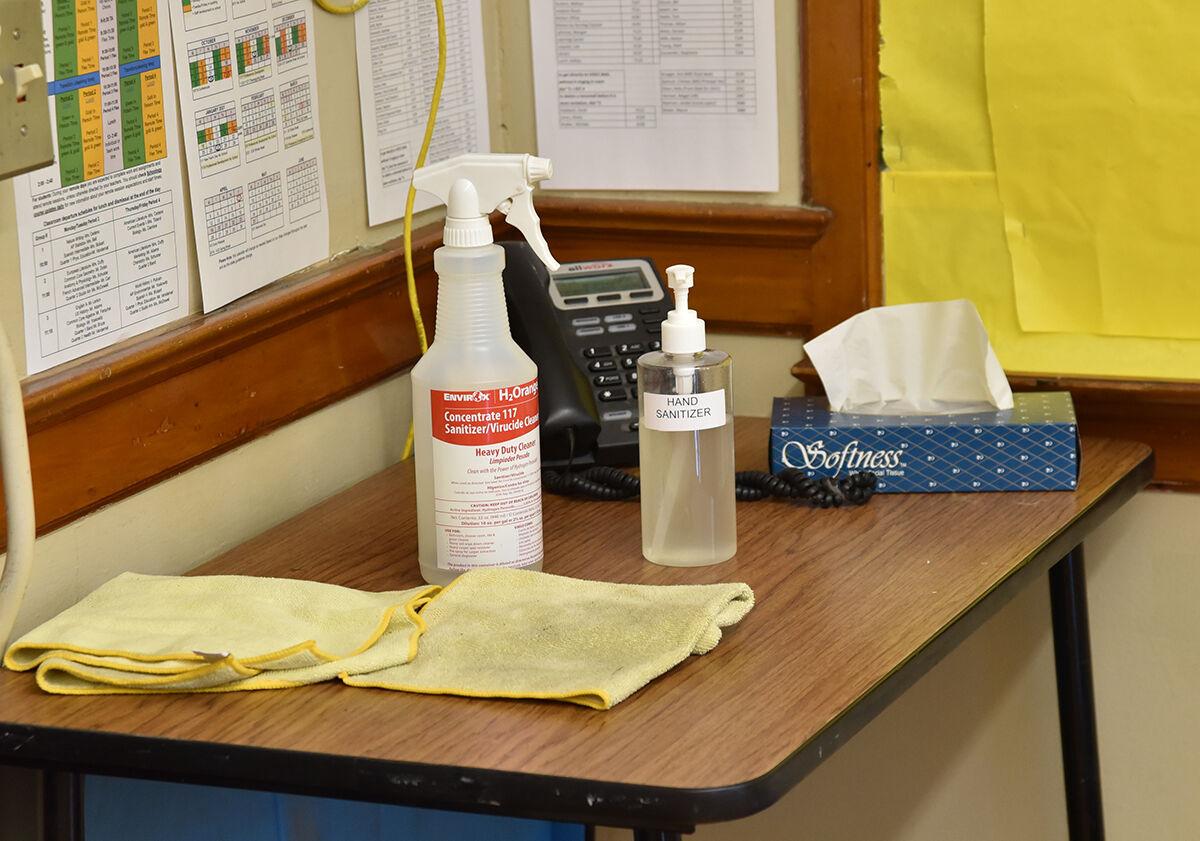 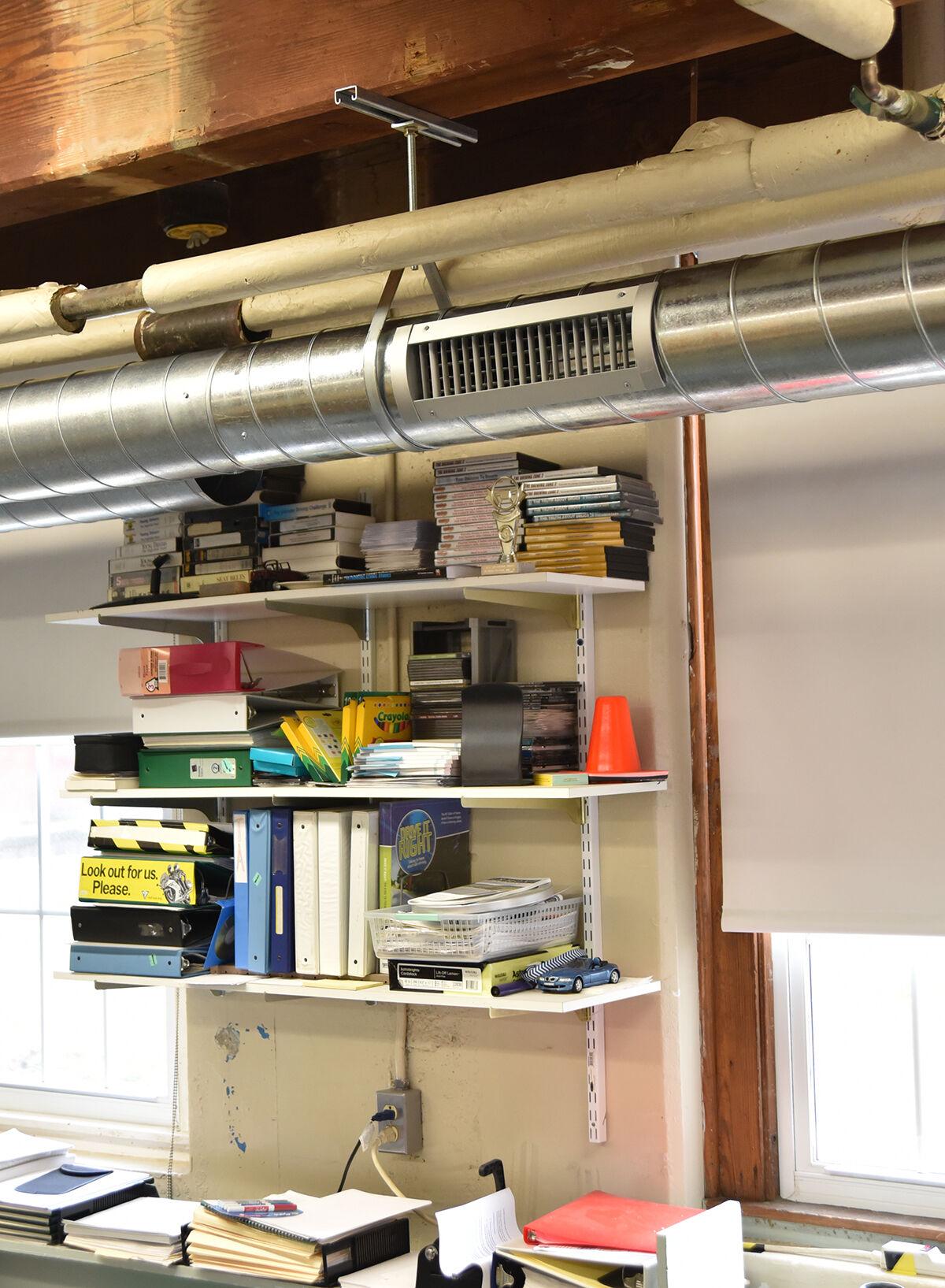 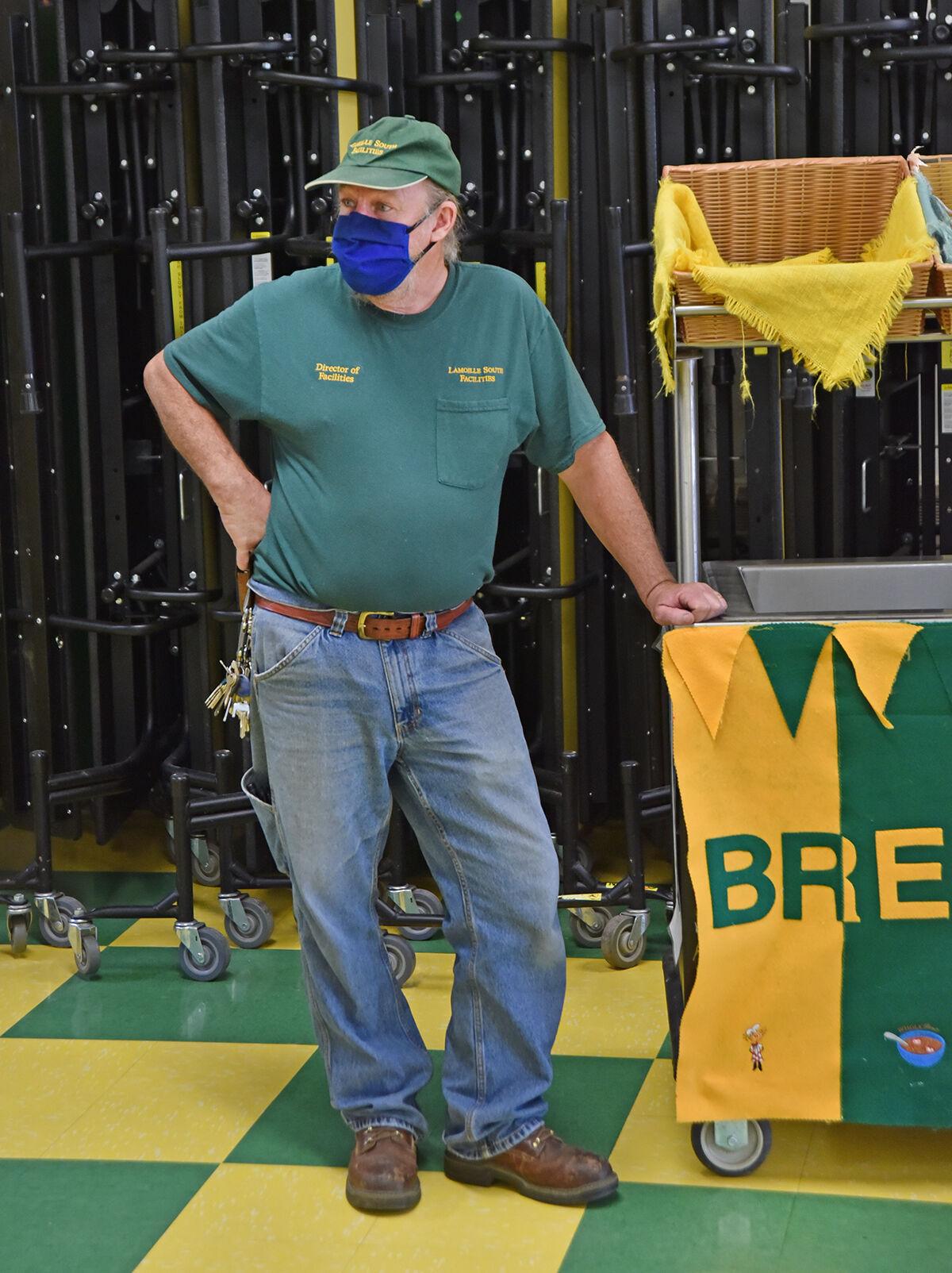 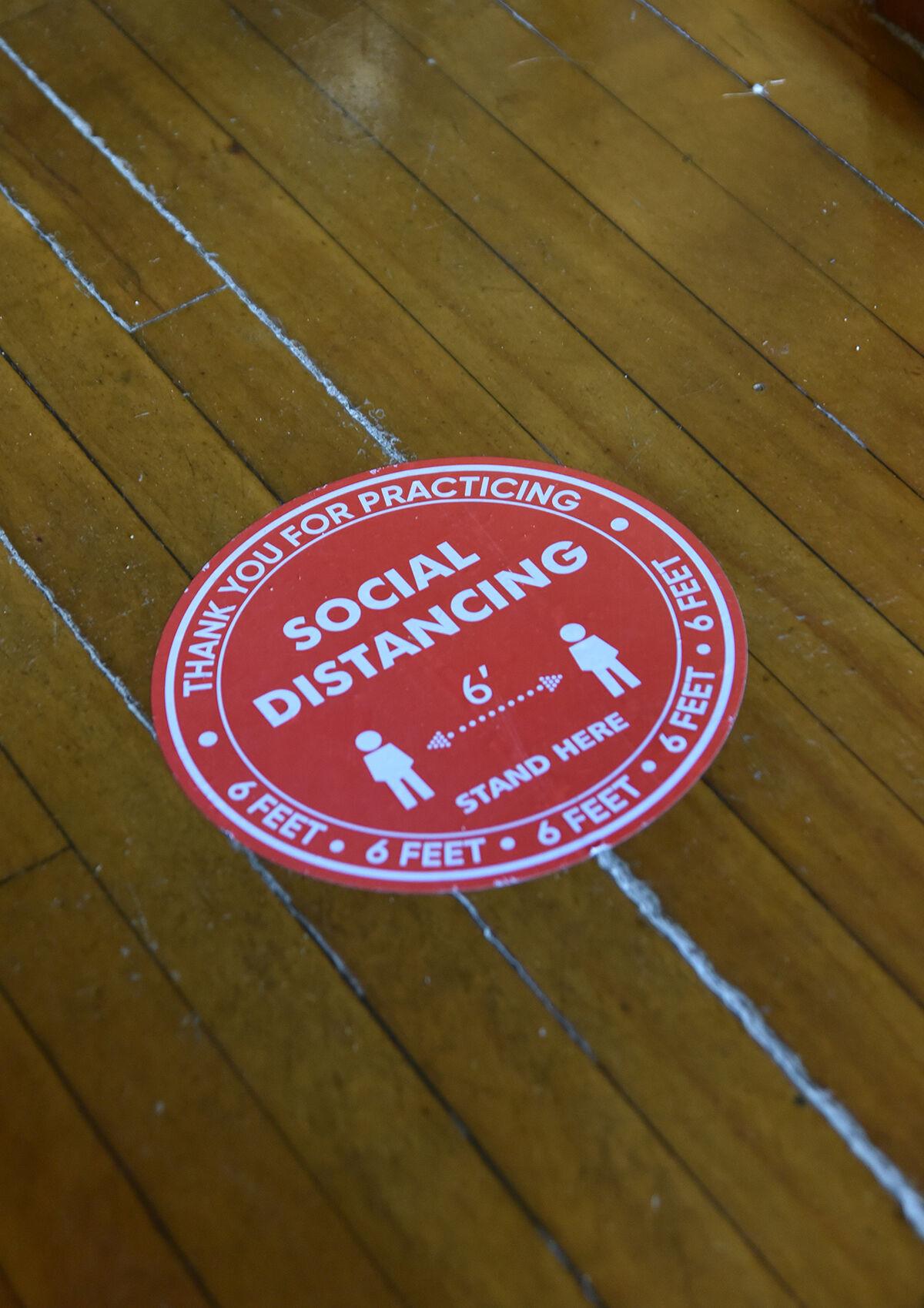 A sign of the times at Peoples Academy, where the efforts to keep the school clean require creativity from the custodial crew.

Air scrubbers clean the air in all of the classrooms in the 1927 building.

Principal Phil Grant talks about the challenges of cleaning the school during a pandemic.

The main part of the school, the one with the stone pillars and heavy wooden front doors, was built in 1927, when a ventilation system meant opening a window or two.

Brian Rafferty, the campus’s facilities manager, said this creates difficulties in a pandemic since air circulation is a key part of mitigating virus spread.

But, the school has found creative ways to make it work.

“What we need to do is the same, but not the way we do it,” Rafferty said on a recent tour of the school. “The things we can’t get to when everyone’s in here we get to on Wednesday.”

All Lamoille County schools use Wednesdays as remote-only days, allowing crews the chance to deep-clean campuses.

On last week’s tour, less than a month into the school year, the old, creaky wooden floors still had that waxy, shiny new-year look that hasn’t yet dulled from traipsing sneakers and muck boots.

The gym might not echo at all this year with the squeaky sounds of basketball shoes.

The PA custodial crew covers the high and middle school campuses, which has grown over the century into a sort of architectural family tree — the old building in the late 1920s, a new wing in the 1960s and an even newer one near the turn of this millennium. As the campus evolved, so did some of the systems in the school buildings.

The 1960s wing, for instance, has hulking air exchangers big enough to drive a tricycle through. And the more modern middle school has computerized “unit ventilators,” those long beige things you often see — and hear — in hotel rooms that heat and cool.

The 93-year-old original building had a steam heating system, which can still be seen in the little square damper alcoves in every classroom, a century old technology controlled by brass pull chains above the dampers. Of course, you could always open the windows, but remember, this is Vermont.

“This part of the school never really had circulation,” Rafferty said.

Enter the air scrubbers. Every classroom in the old building has one of the squat, square blue machines. Peoples Academy is not modern, hence the portable scrubbers.

HVAC works in a building the way the respiratory system does in a body.

Scrubbers are switched on around 6 a.m. and off when the school day ends.

As they run, they whir in the background, a constant reminder of their need in the time of COVID. They aren’t overly loud, but they certainly aren’t silent.

“It can be hard for the teachers to talk over it,” said PA principal Phil Grant, also along for the school tour. “With the combination of that and having to talk through a mask and engage with students without being able to see their faces, teachers get physically more exhausted.”

Rafferty said, pre-COVID, the school district had improvements to the high school’s HVAC system on its facilities wish list — along with a new gym and other amenities — but the merger of Morristown/Elmore with Stowe put school improvement plans in all those towns in hold. Any hopes of schools being able to tackle their facilities renovations on their own vanished, as what was Morristown’s is now Stowe’s and Elmore’s. Indeed, some saw Act 46 as a different kind of invading force, with a far-removed State Board of Education calling the shots.

Grant said Rafferty has been with the school long enough to give him a sense of the long view. In an era of constrained budgets, the facilities infrastructure gets improved bit by bit, even in the pandemic.

“Because Brian thinks long-term, I’d say we were in a good position to respond quickly” to COVID, Grant said.

For instance, there is a piecemeal effort afoot to retrofit the old building with modern ductwork. A good example of that is in the driver’s education classroom in the basement level — shiny chrome tubes snake their way around century-old post-and-beam infrastructure.

“If we had an unlimited budget, we’d do this throughout the whole school,” Rafferty said.

Rafferty’s custodial crew runs two shifts. The first gets there at 6 a.m. before any students and the other crew relieves them at 2 p.m. and cleans until 10. In that 16-hour span, all of the “touch points” in the school — think handrails, light switches, sink faucets, doorknobs, handles and latches — will be wiped down with sanitizer innumerable times.

The last one out sprays the air, walking backwards, letting science take over.

The crew uses electrostatic sprayers to kill invisible bits of germs or virus that might be on surfaces or in the air. These high-tech backpacks full of disinfectant have spray nozzles that place a positive ionic charge on the cleaning solution as it passes through. Acting like a magnet, the positively charged disinfectant clings to the negatively charged surfaces.

Walking through the 93-year-old halls of Peoples Academy, Rafferty and his crew resemble a certain ragtag group of scientists quelling New York City of scary spirits. Who you gonna call? COVID busters.

For now, custodial crews have incorporated the extra pandemic-necessitated protocols neatly into their daily routine. They’re working eight hours a day, anyway, so in some respects, they adapt to their new duties.

Their workload is decreased measurably by the closure of large gathering areas like the gym and the auditorium, and the repurposing of the cafeteria.

“I can’t understate the amount of community use of this building, especially the gym,” Grant said. “The gym gets used every day of the year except for Christmas.”

Sometimes then, too, Rafferty added.

The temperate season in the first few months of school helps with keeping the floors clean, but that will change when winter comes and countless boots track in mud, melted snow and road salt brine.

The cafeteria has been turned into a grab-and-go food nexus. No meals are taken in there, but are instead delivered to middle level students in their classrooms and schlepped the quarter mile or so to the Morristown Elementary School by the intrepid food services staff.

High schoolers are able to get their food on their own, but they also take it back to their classrooms with them.

Grant noted the kitchen staff is still cooking food for the whole under-18 community, too. That includes any students who opted for fully remote learning and homeschoolers who need meals.

Rafferty said the cooks have their own set of cleaning protocols in the pandemic.

They are also there on Wednesdays, cleaning their spaces.

“All of our regular rules still apply for everything, plus the ones we’ve added,” Grant said.

Campus tour: Go with the flow at Stowe High

Remember when you were a little kid and your teachers taught you how to stay in the lines when coloring? That skill will be put to good use wh…