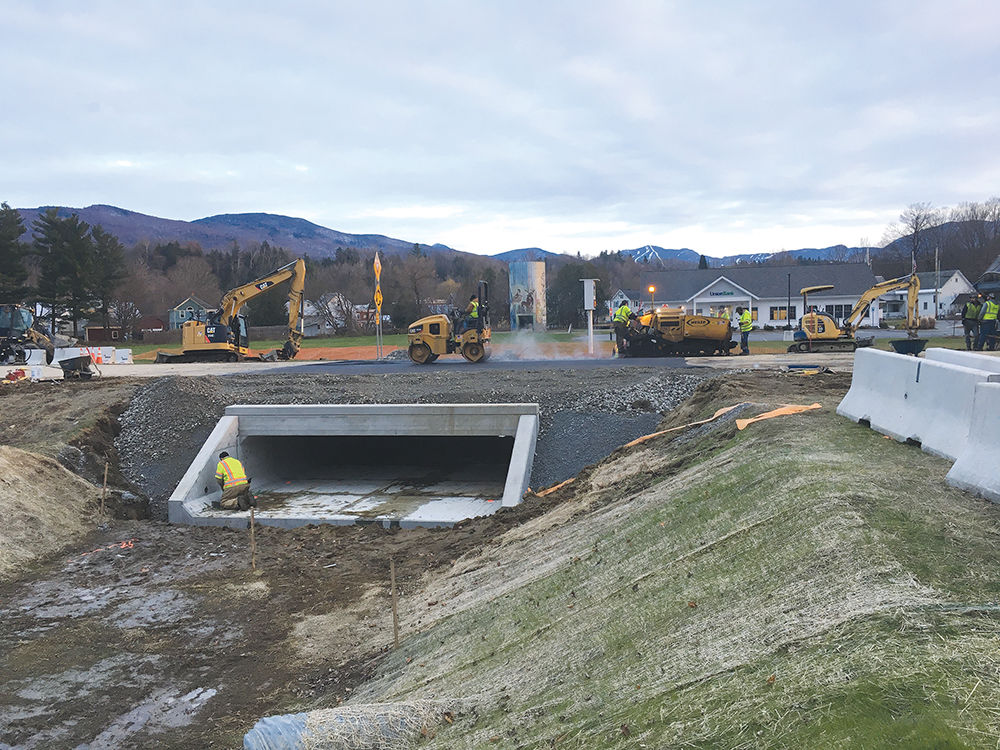 With the Lamoille River bridge replaced, a huge culvert was installed to move out water that overwhelmed a low-lying area. 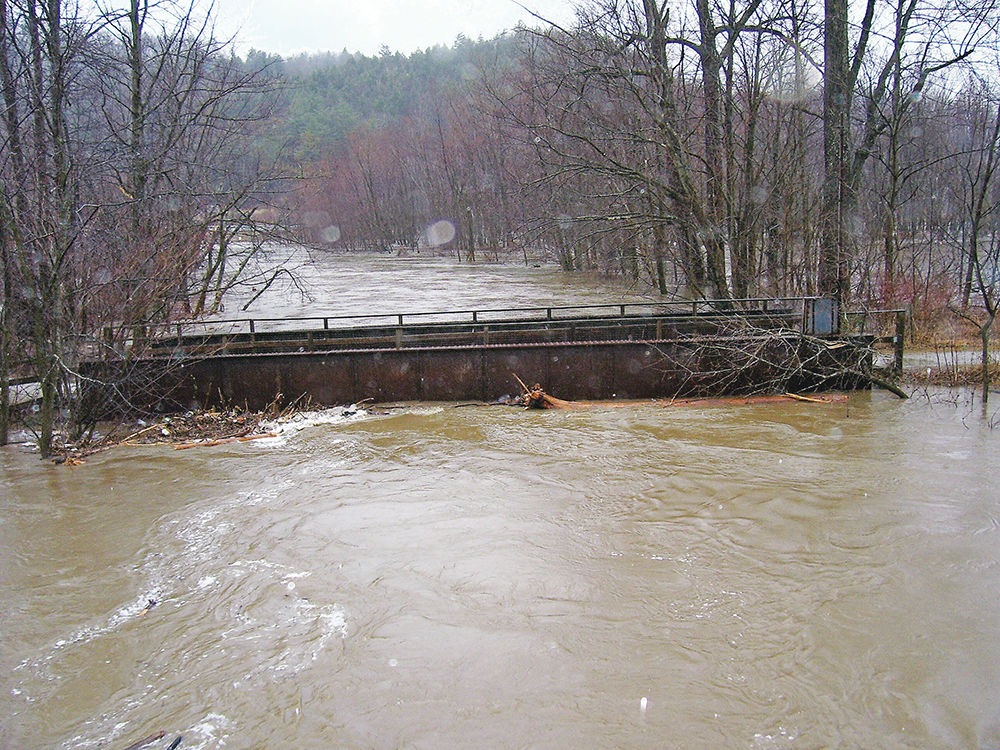 A steel bridge that acted like a dam when the Brewster and Lamoille rivers got too high was part of Cambridge’s perennial flooding problem. The old bridge in this photo has since been replaced, and the new one — along with a new box culvert — was tested in a major rain storm this past Halloween.

With the Lamoille River bridge replaced, a huge culvert was installed to move out water that overwhelmed a low-lying area.

A steel bridge that acted like a dam when the Brewster and Lamoille rivers got too high was part of Cambridge’s perennial flooding problem. The old bridge in this photo has since been replaced, and the new one — along with a new box culvert — was tested in a major rain storm this past Halloween.

As the new year approaches, Cambridge residents can enter 2020 with a semblance of confidence that, while the area will always be susceptible to flooding, some key projects around town have ensured the waters will recede faster than ever before.

When 4 inches of rain falls overnight on Cambridge, residents have come to expect a lot of flooding.

But that didn’t happen after a freak rainstorm walloped the region the day after Halloween, thanks to a pair of projects in Jeffersonville and a little roadwork in the area of town known as Pumpkin Harbor.

“I think people had a sense that it wasn’t as bad this time around, even though the storm itself was much worse,” town clerk Mark Schilling said. “This water came up much faster, too. You can only imagine how bad it would have been if these projects hadn’t been completed.”

Those projects were the replacement of an old railroad bridge over the Brewster River near the eastern entrance to Jeffersonville and the installation of a large box culvert in the flood-prone area where the Bell Gates Lumber company used to operate and is now the site of two artfully redone concrete silos.

Both projects were finished last year, and were overseen by the Lamoille County Planning Commission. A clarion call to do something about the frequent flooding in Jeffersonville sounded loudly after a flood in 2011 that left many of the village buildings underwater, including a senior housing complex.

Most Vermonters may think of Tropical Storm Irene when they hear “flood” and “2011,” but much of northern Vermont was hit even harder by an unnamed storm three months before Irene.

Seth Jensen, lead planner for the Lamoille County Planning Commission, said the projects were the result of six years of planning and funding from the Federal Emergency Management Agency.

The Halloween storm was the first big test, which had harder rain than the one in 2011. The rivers still overran their banks, but the water then went where the engineers designed it to go.

To get a sense of how antiquated some of Cambridge’s infrastructure was, one needs only to remember the old railroad bridge over the Brewster River near its confluence with the Lamoille. It was a crude span of steel, supported on both sides of a relatively narrow channel by rough-hewn stone blocks.

For the most part, it served its function as a bridge. But whenever the river rose above a certain level, the bridge turned into something more like a dam, a key design flaw. Water jammed up behind the bridge would then go wherever it could, often right into the village.

Compounding that was a lack of adequate drainage out of the village, a scenario amplified when the Brewster River that flows down from the mountains gets flooded during springtime rains.

To fix this, the project engineers replaced the old bridge with a longer one — widening the river channel at the same time — with lattice siding rather than a mean, impenetrable slab of steel.

And they added a much larger culvert near the intersection of Routes 15 and 109: The concrete box is 20 feet wide, 4 feet high and 54 feet long.

Before any of that, river engineers did a comprehensive “hydraulic modeling” of the river, which measured its contours and capacity and was able to simulate all manner of flooding situations.

Jensen and the planning commission’s executive director, Tasha Wallis, said the community was involved in the project, too, to ensure that the rivers weren’t modified out of their naturally beautiful existence.

“It was an interesting mix of having the baseline data but also having community input, seeing how the community values the river, and how they interact with it,” Wallis said.

Laird MacDowell lives uphill of the typical flooding areas, up near Smugglers Notch, where, “if it comes up to my point, I’d have to build an ark,” he said.

MacDowell thinks things would have been worse if the Halloween rains had come in late spring, when snowmelt from the mountains would have turned the Brewster River flowing from Smugglers Notch into a raging turmoil.

Because it was fall, the Lamoille River was the only major flood problem in Cambridge.

“It was the highest I’ve seen the Lamoille,” MacDowell said. “Four inches of rain in one night. I’ve never seen that type of rain other than in Irene and that was mostly central Vermont.”

Still, he said, the gravel on the Lamoille Valley Rail Trail held up because the floodwaters receded so quickly, and the playground at Cambridge Junction “didn’t even really get wet.”

Schilling, the town clerk, said he and others were out observing the flooding the day after Halloween. He said the water in the village never escaped beyond the area where the silos that welcome people to Jeffersonville are located, at Routes 15 and 109.

“I personally observed the water flow at the height of the storm and was amazed how much water was moving through the new culvert,” Schilling said. “It was just roaring through that culvert.”

Outside Jeffersonville, on the western side of Cambridge, the Lamoille spilled over onto Pumpkin Harbor Road. And it flooded Route 15 near the entry to Cambridge village known as the “Wrong Way Bridge.” Those are pretty normal occurrences.

Preventing Route 15 flooding in that low-lying area would take a major investment by the state government — the river is close to the road even during dry spells — and Schilling said he has to tell people all the time that the town can’t do anything about that area because Route 15 is a state highway.

Pumpkin Harbor Road, however, was the beneficiary of a town-funded project. Last March, voters added $100,000 to the highway budget to raise Pumpkin Harbor Road by about 3 feet, above the level of the 2011 flood.

Schilling said the select board, when it pitched the Pumpkin Harbor project, told the community it wouldn’t make the area floodproof — that would have cost millions and needed wetlands permits and landowner permission.

The river hydraulic modeling that the engineers had done ahead of the culvert and bridge projects also provided data on how the Lamoille might act farther downstream, near the Wrong Way Bridge and Pumpkin Harbor.

The outcome, after a summer of work on the road? It was the last road to close in the Cambridge flooding and the first one to reopen. And the water never got so high that vehicles couldn’t get in or out.

“That’s big difference if you have a lifesaving situation, between a foot and an inch or two of water,” Jensen said.

“Repairs there were a big success,” Schilling said. “Sometimes you don’t know what kind of value you’re going to get, and sometimes people wonder why you’re spending so much.”

Voters in Wolcott will have plenty on their plates when they head to Town Meeting Day March 3. Along with a municipal budget of nearly $1.6 million and a $4.8 million school budget, Wolcott voters will also be electing a new town clerk and treasurer for the first time in over three decades.

Johnson’s annual meeting will be a mix of dollars and sense, with a $3 million town budget up for approval and a full slate of aspirational articles for townspeople to talk about.

Here’s a rundown of when and where town meeting will take place across Lamoille County in less than two weeks. March 3 is also Super Tuesday, and Vermonters will be voting in the presidential primary that day along with voters in 13 other states.