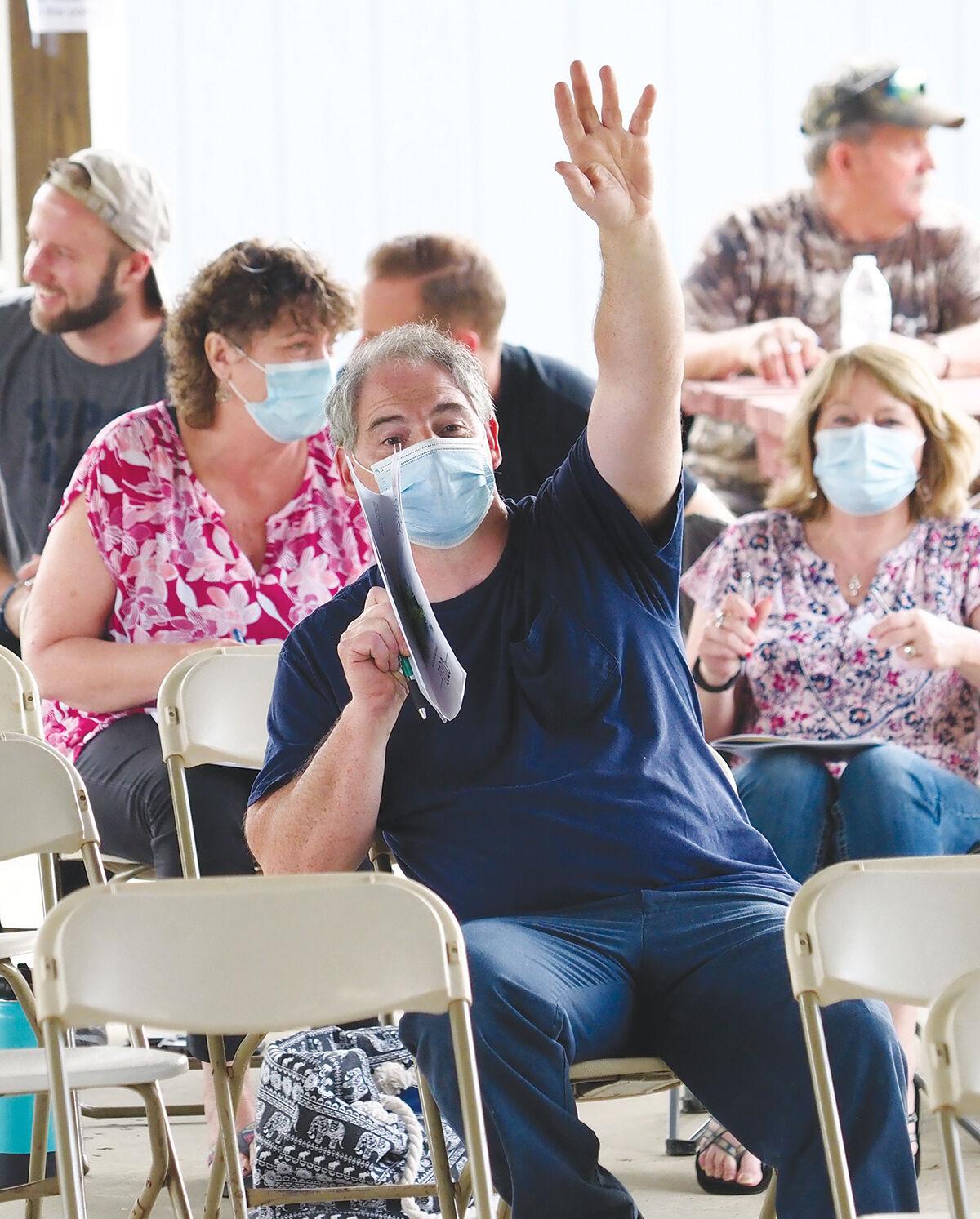 Select board chair Earl Domina Jr., raises a hand before addressing the outdoor crowd in Belvidere. 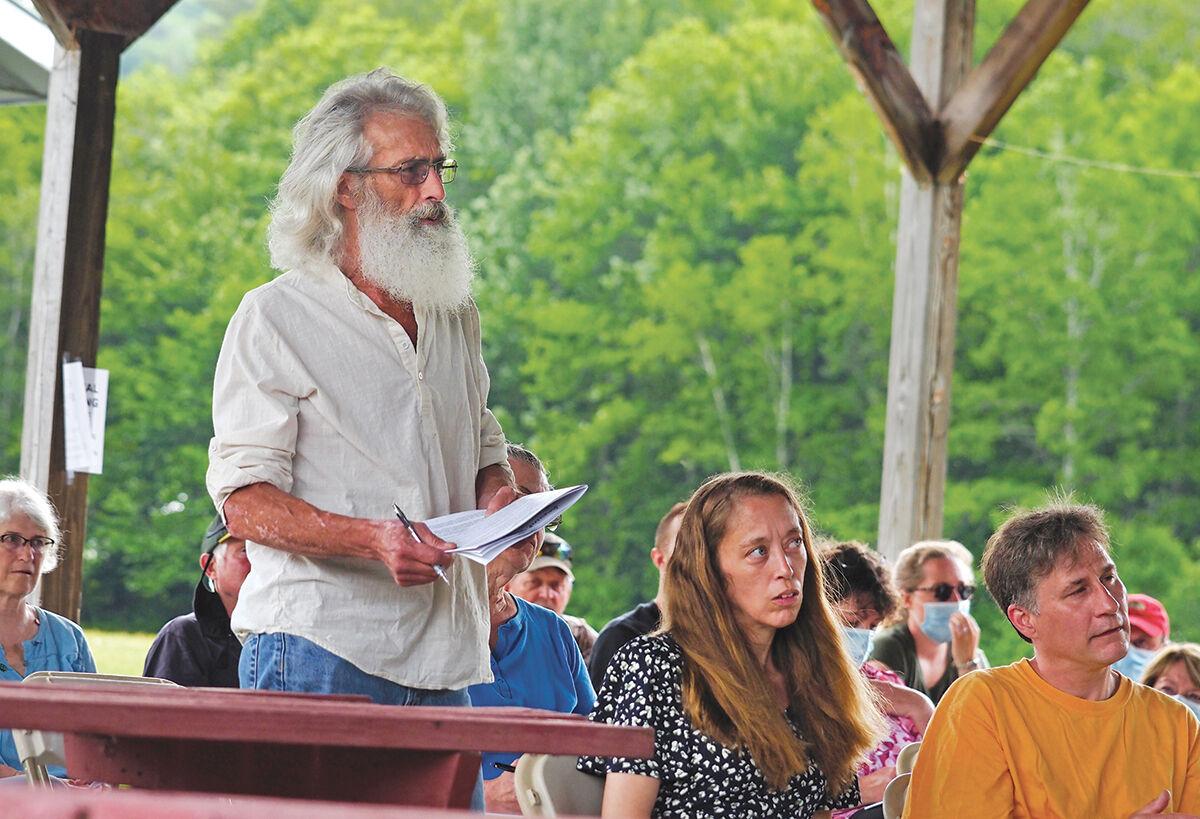 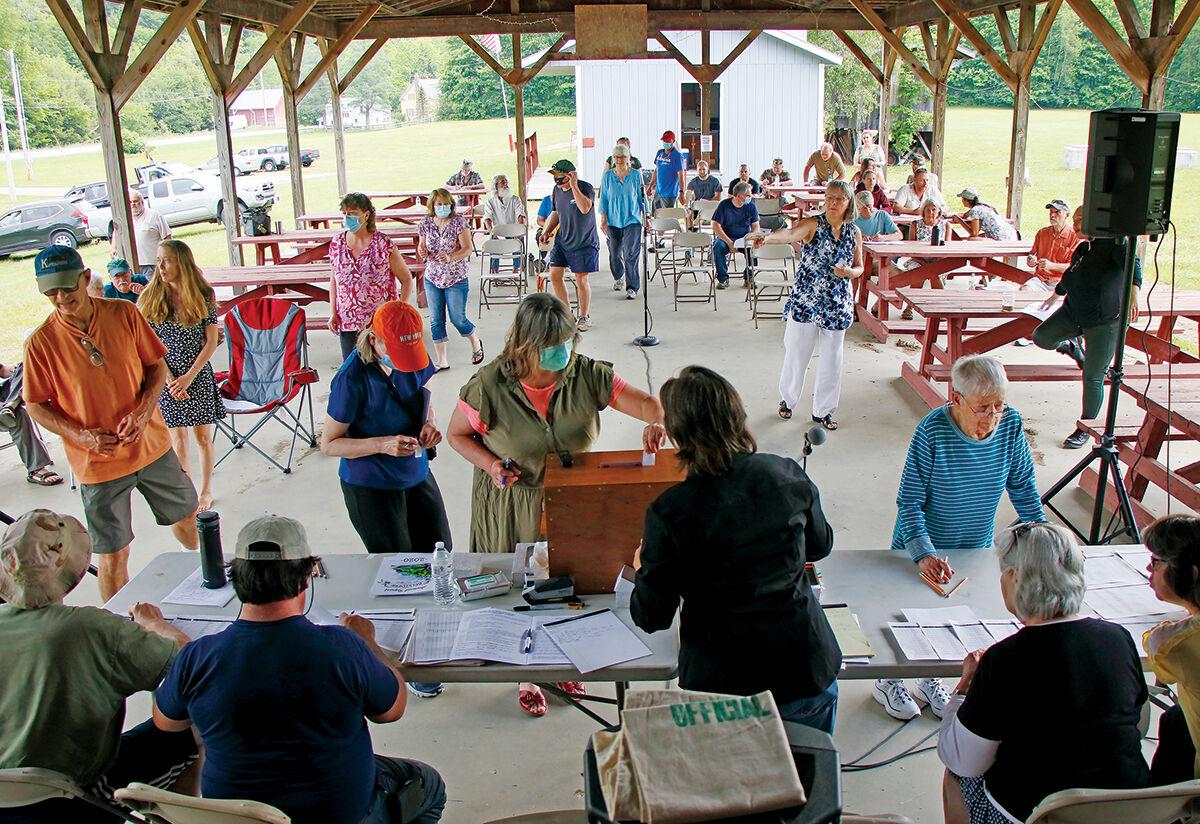 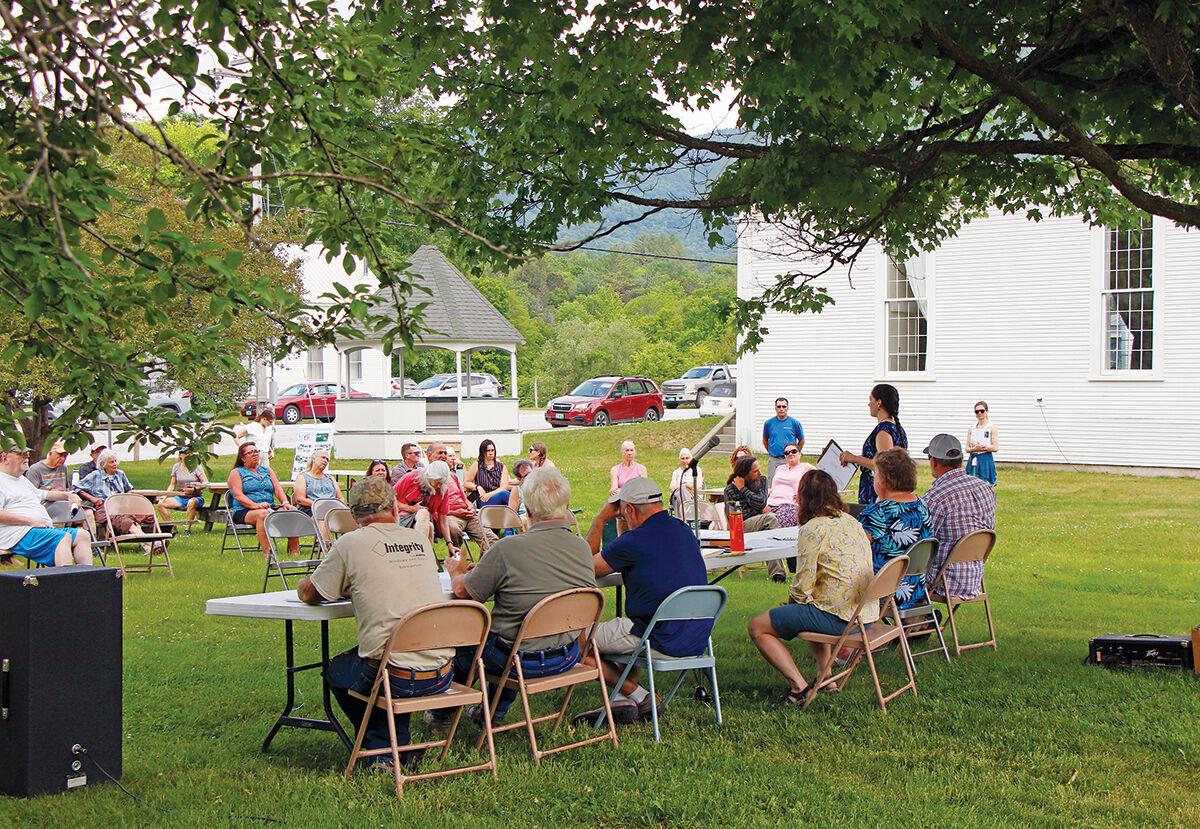 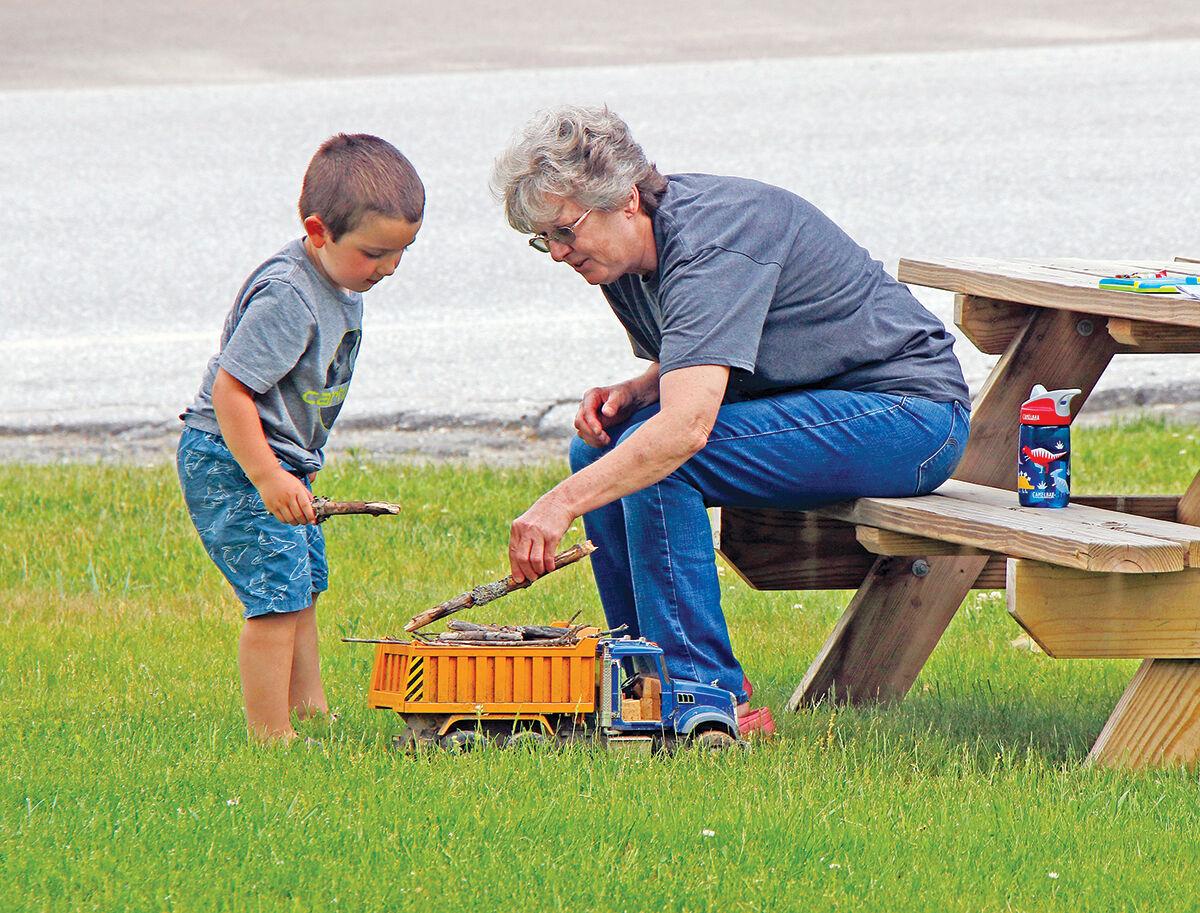 Amy Williamson and Marshall Broe outside the Waterville meeting on the town green. 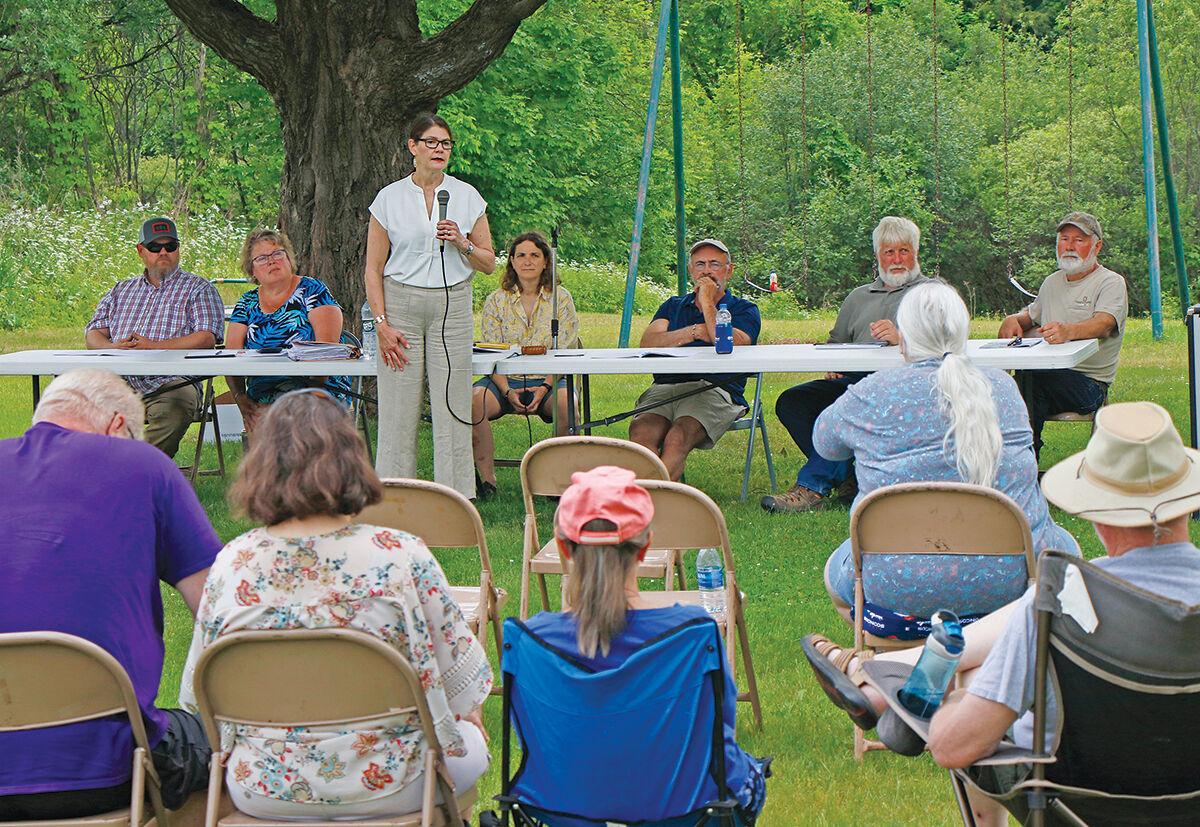 Representatives from the Lamoille County Planning Commission, including Kate Lalley, are interested in gathering input from Watervillians about their concerns over speed limits through town, and exploring ways to mitigate that. 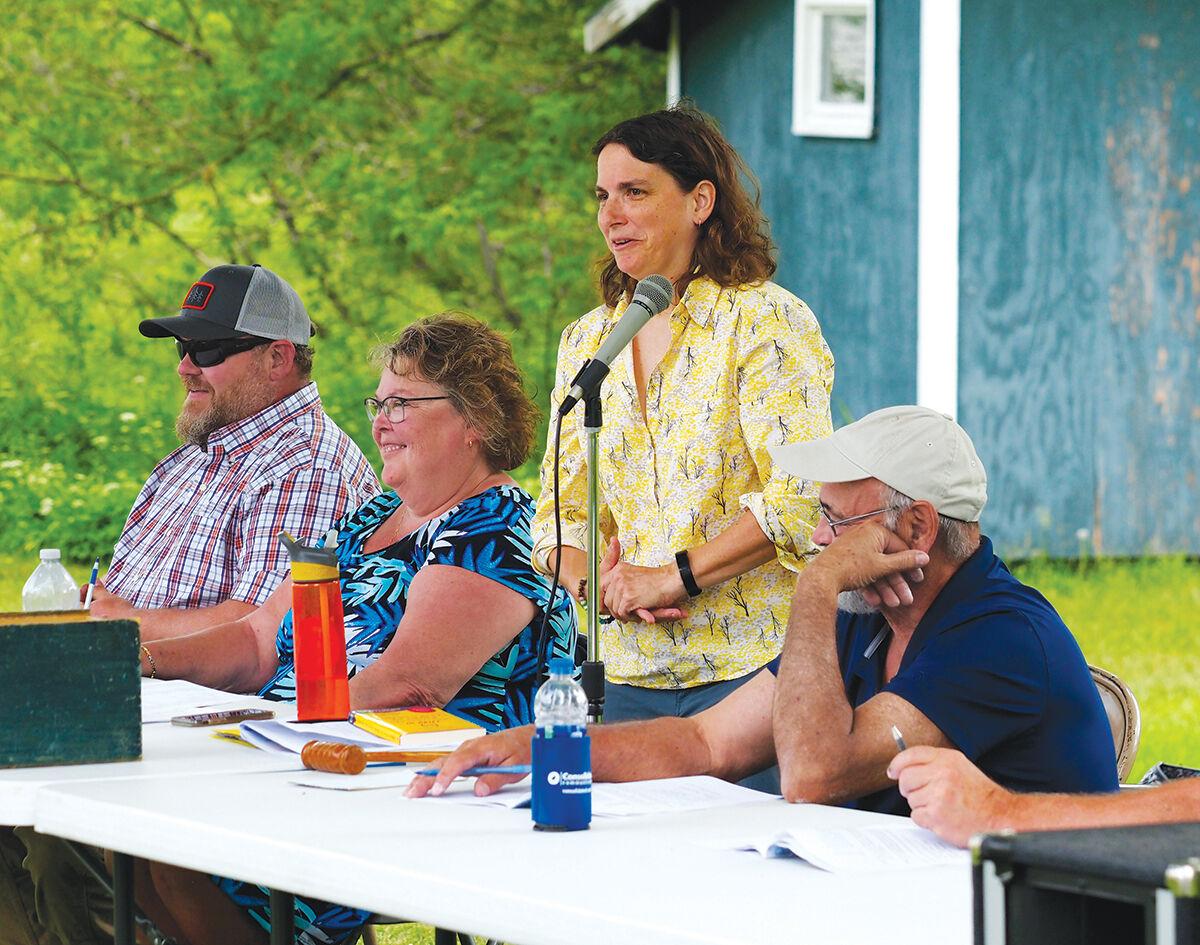 Waterville's $357,000 budget was passed with little fanfare, and the entire current slate of elected officials were ushered back into office.

Select board chair Earl Domina Jr., raises a hand before addressing the outdoor crowd in Belvidere.

Amy Williamson and Marshall Broe outside the Waterville meeting on the town green.

Representatives from the Lamoille County Planning Commission, including Kate Lalley, are interested in gathering input from Watervillians about their concerns over speed limits through town, and exploring ways to mitigate that.

Waterville's $357,000 budget was passed with little fanfare, and the entire current slate of elected officials were ushered back into office.

Held the first Tuesday in March since time immemorial, Vermont’s annual meeting is an indoors affair, with flannel and Gore-tex, muck boots and winter hats, on an often very cold day.

For Belvidere and Waterville Tuesday, it was hot, hazy, humid and held outdoors. Both towns — along with Eden, which holds its meeting next Tuesday — took advantage of legislation allowing municipalities to push back town meetings during the pandemic.

“In spite of the forecast and the fear we’d be sweltering in the humidity, there was a nice breeze,” Belvidere town clerk Cathy Mander-Adams said of the crowd of roughly 40 at the town ballfield.

Over in Waterville, the meeting was held on the town green, and resident Sue Davis — a News & Citizen columnist — said the sun mostly hid behind the clouds as people conversed in the warm June morning.

“There was a lot of joking around,” Davis said. “It seemed like old times.”

Belvidere’s $282,000 budget passed with nary a peep from the populace, according to Mander-Adams, who said there were 37 people voting at the apex of the meeting. She said the budget was smaller than the previous year, but it’s usually customary for at least someone to ask questions or offer an opinion.

“There were absolutely zero questions about the budget. Not one,” she said.

She thinks the fact that Ken Adams Jr. was re-elected to the selectboard without competition and the reasonable budget shows a mandate from the populace that “people are confident that things are going to be taken care of properly.”

Kevin Leavitt, one of the three selectboard members and the temporary road commissioner, was elected to serve in the role proper. Otherwise, the town re-elected its current slate of officers, including Mander-Adams.

In nonbinding business, she said the biggest topic of the day was a presentation from representatives with Lamoille Fibernet, the area’s communications union district, tasked with helping bring broadband to the whole county, including Belvidere, where one of the most-populated roads is literally called Back Road.

“Even though it’s not going to happen overnight, it’s good to know they are getting the financial support and people can finally have better internet,” Mander-Adams said.

According to Davis, one of the hot topics at Waterville’s town meeting was water. She said there was talk about how current drought-like conditions have lowered the town’s water table.

“Right now it’s OK to do the dishes and water your gardens, but probably not OK to wash your car,” she said.

Another discussion that came up was the town’s main street, state highway Route 109. Representatives from the Lamoille County Planning Commission are interested in gathering input from Watervillians about their concerns over speed limits through town, and exploring ways to mitigate that.

Davis said there was talk about having a crosswalk between the village green and the Waterville Market, or placing hay bales along the side of the road to evoke a more bucolic — i.e., slow down — feel.

“Some liked it and some didn’t think it would work,” Davis said, capturing a typical town meeting exchange.

Internet was also a topic of discussion in Waterville, as Democratic Rep. Lucy Rogers, talking to her hometown crowd, talked about legislative efforts to improve broadband.

As far as actual business, the town’s $357,000 budget was passed with little fanfare, and the entire current slate of elected officials were ushered back into office.

Normally held the first Tuesday in March, the pandemic turned the annual Town Meeting Day into ballot-only affairs, except for those towns tha…