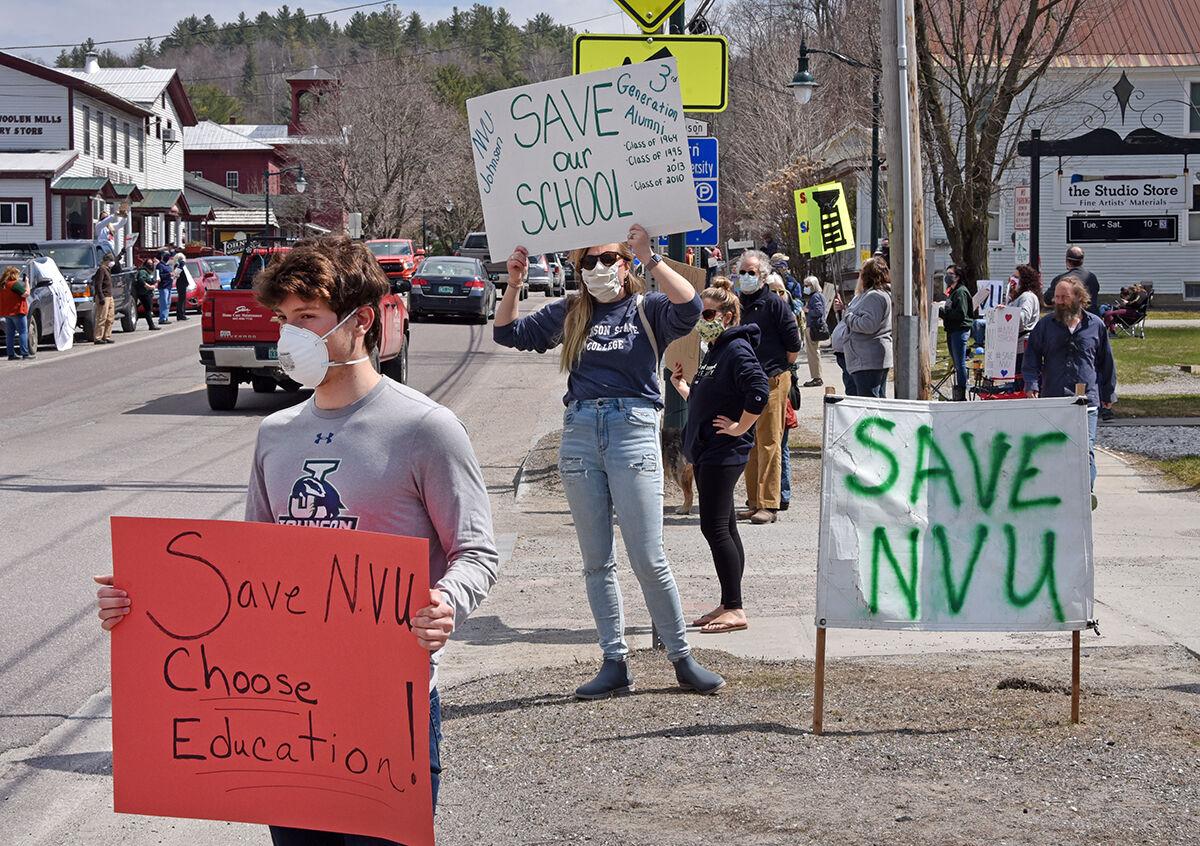 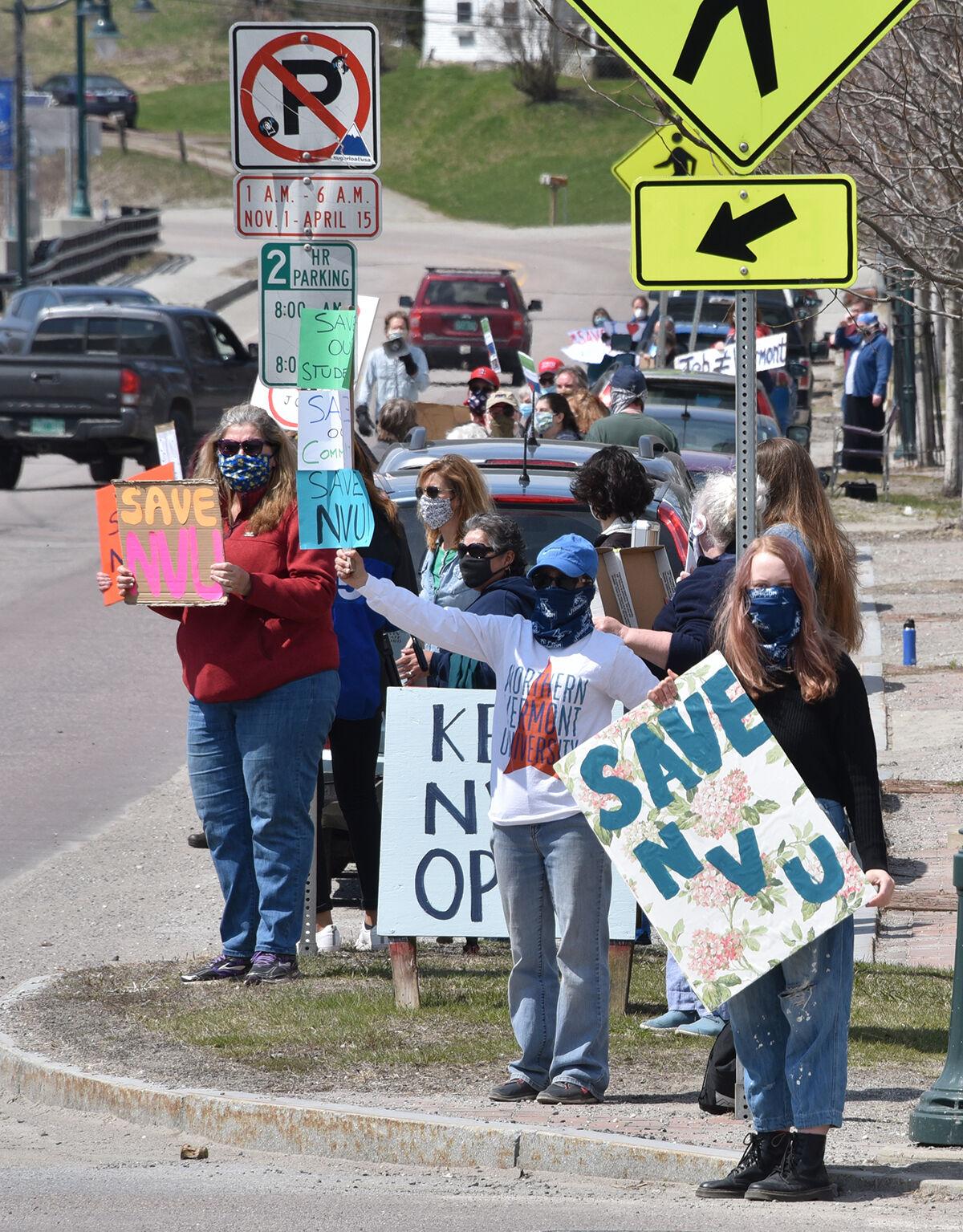 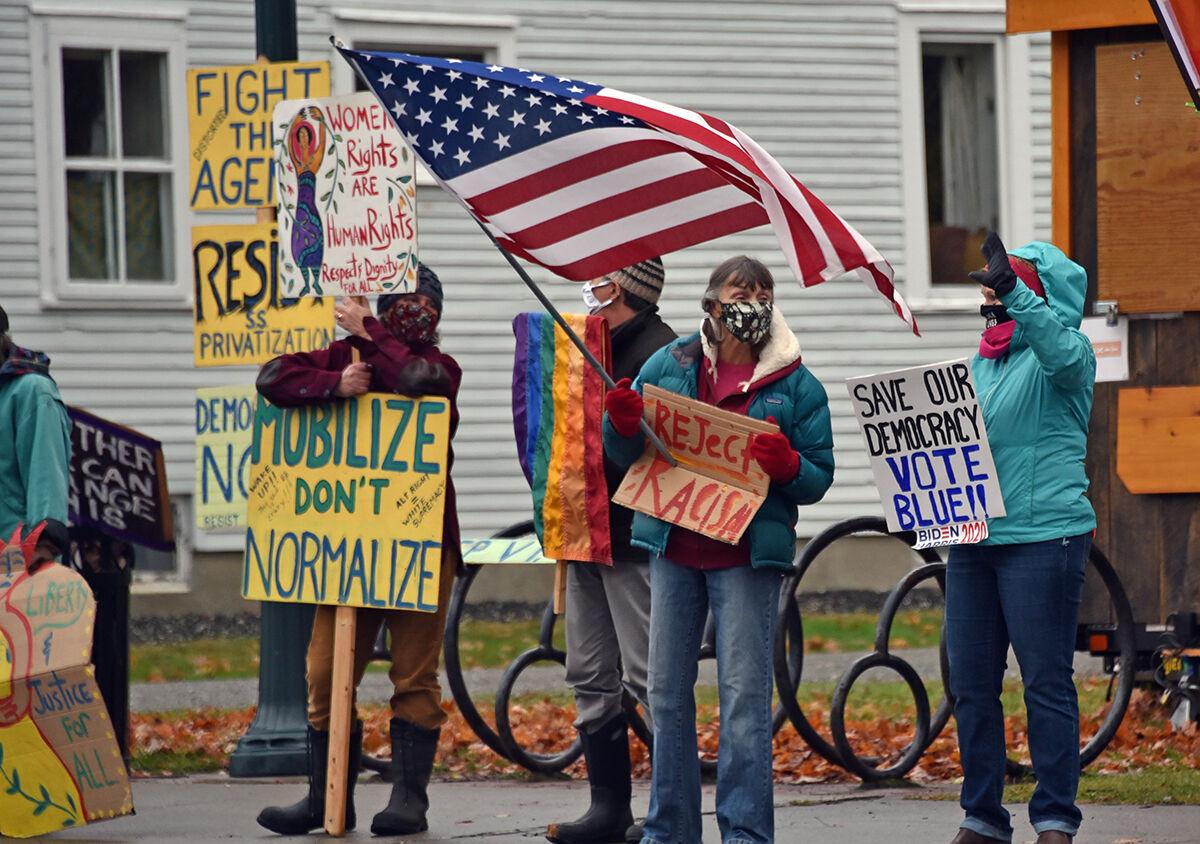 Protests of all kinds were common in Johnson in 2020, taking place on a weekly basis.

Protests of all kinds were common in Johnson in 2020, taking place on a weekly basis.

Johnson started off the year as a community discussing whether it ought to merge its village and town governments — and ends it a community trying to avoid coming apart at the seams.

In late January, a joint meeting between the town and village governments promised a crowd so big it had to be moved to the elementary school. The topic: merging the two governments.

The meeting felt almost like a wedding, with representatives of — and loyalists to — either the town or village sitting on either side of an aisle that ran down the middle of the gym. Merging the village and town would come with complications.

How divided is Johnson? Well, the five line workers with the Johnson Electric Department are also responsible for plowing the sidewalks. The town is responsible for the roads.

“There is some ill will in the community,” said Kent Gardner, who was hired to study the two separate municipalities. He said merger talks have “created a fair bit of rancor.”

This all in a town that, in 2019, adopted an inclusivity statement that reads: “The people of Johnson embrace inclusiveness and together we will build bridges to understanding, ensuring that all who live, work and visit our town feel welcome and safe. We reject racism, bigotry, discrimination, violence and hatred in all its forms. The things we embrace are kindness, gentleness, understanding, neighborliness, peace, tolerance and respect for and toward all. Together we can have a cooperative, sustainable and thriving community where everyone is honored and valued.”

Despite codifying a sense of togetherness, the community couldn’t even agree how to come together as a government.

Then the pandemic started.

Johnson was hit particularly hard early on with the proposal by the head of the Vermont State College system to shutter both the Johnson and Lyndon campuses of Northern Vermont University.

The college closure would have had devastating effects on the town — it provides a third of the village electric, water and sewer revenue and 13 percent of the town’s overall tax base. A study by the university says it has a $113 million economic impact in the Johnson and Lyndon areas.

Shortly after that, a Black man named George Floyd was killed by a white police officer in Minneapolis, and the reverberations were felt all the way here.

Racial justice issues have led to demonstrations, mostly peaceful, sometimes not, across America. Talk about Black Lives Matter was met with responses of “blue lives” or “all lives” also mattering, the former a reference to police officers, who have come under increased scrutiny for their uses of force and for the amount of taxpayer money that goes to fund them.

These are complicated conversations. In Johnson, though, it’s doubly so, because of the entrenched adherents to either the town or the village governments.

Perhaps no single issue typified this strife more than an attempt by Black Lives Matter supporters to fly a BLM flag from the fire department flagpole.

Perhaps no single issue typified this strife more than an attempt by Black Lives Matter supporters to fly a BLM flag from the fire department flagpole. In a single meeting one September evening largely dominated by racial justice issues that lasted nearly into the next morning, the department resisted, taking the position that Black Lives Matter is a political hot potato it had no desire to handle.

Even now, after a compromise decision to fly the flag from the pole in the public village green was struck in October, the red, white and blue American flag is still the only one flapping in the wind during the final days of 2020.

Despite the divisiveness that has turned up the political heat in Johnson to the point of catching flame — one looking for symbolism might find it in the roughly half dozen cases of vehicular arson that has plagued the town, and has police scrambling to find the firebug — there were signs aplenty of the community coming together.

For one, pushback against the proposed closure of the college brought people to the streets of Johnson, clad in masks and bearing all manner of NVU and Johnson State College apparel; to social media message boards; and to the virtual Vermont State Colleges boardroom. The proposal lasted about three days before it was yanked, and the chancellor resigned.

Also a bright spot, the town was a model of how to best use the remote Zoom platform to bring the community together, at least virtually. For the first three months of the pandemic, Johnson’s emergency management team held a weekly COVID-19 update that proved essential viewing for its mix of information, rotating roster of guest speakers and weekly nightcap of live music.

One local singer, Isaac Eddy, and his two young girls, capped off the final version of these meetings with a rendition of “Friends of Johnson” with a series of impromptu lyrics about all the things great about Johnson, provided by people throughout the meeting in the Zoom chat box.

Then, to cap off the year, Gordy Smith, chair of the village trustees, resigned, saying in Dec. 15 letters to Selectboard Chair Eric Osgood and Village Manager Meredith Birkett, “The constant barrage against me, Arjay (West, fire chief), fellow firefighters, my fellow trustees, especially Will, and Meredith is non-stop. I keep saying that things will get better, but they only get worse. I see no end in sight with a handful of people constantly disrupting our community.”

The bulk of the December 30, 2020, issues of the Stowe Reporter/News & Citizen were a time capsule of sorts, with images and essays that s…

Vermont’s schools and school communities have been at the forefront of supporting people of color in recent years, with public awareness incre…