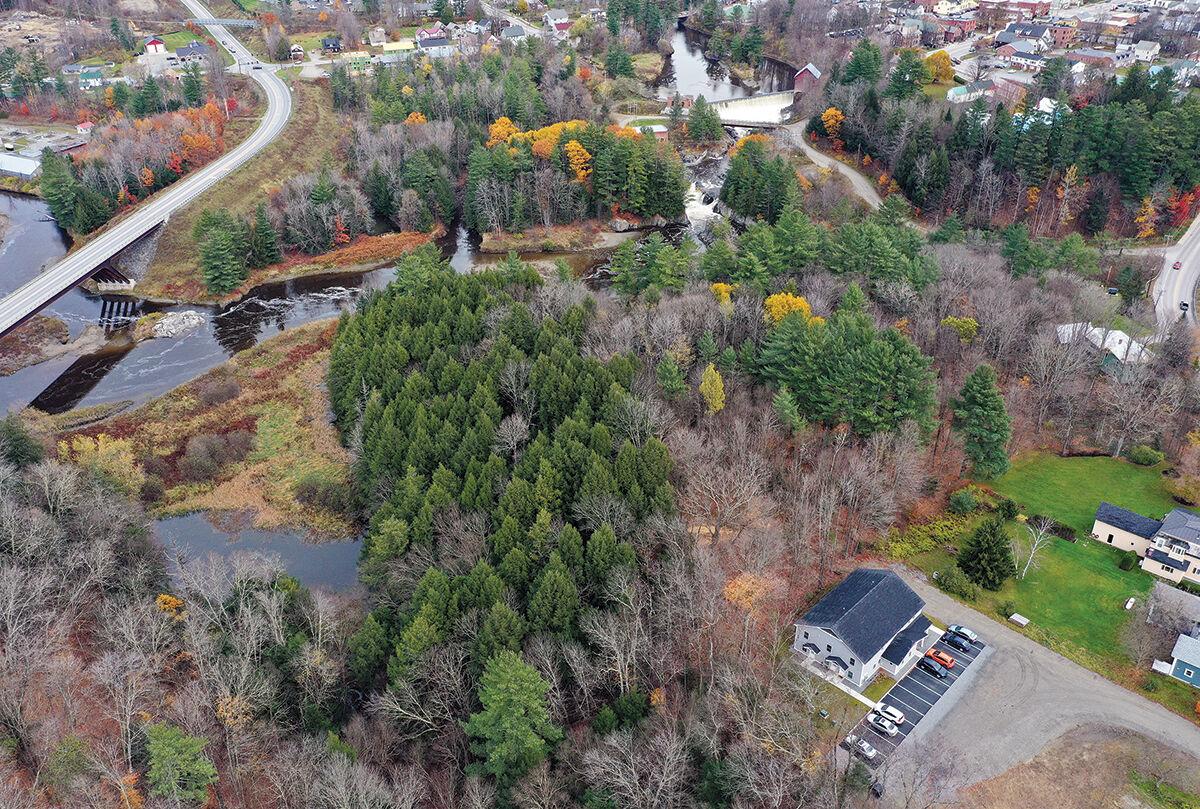 An overhead view of the forested site where developer Graham Mink plans to build perhaps the largest housing complex in Morrisville’s history. 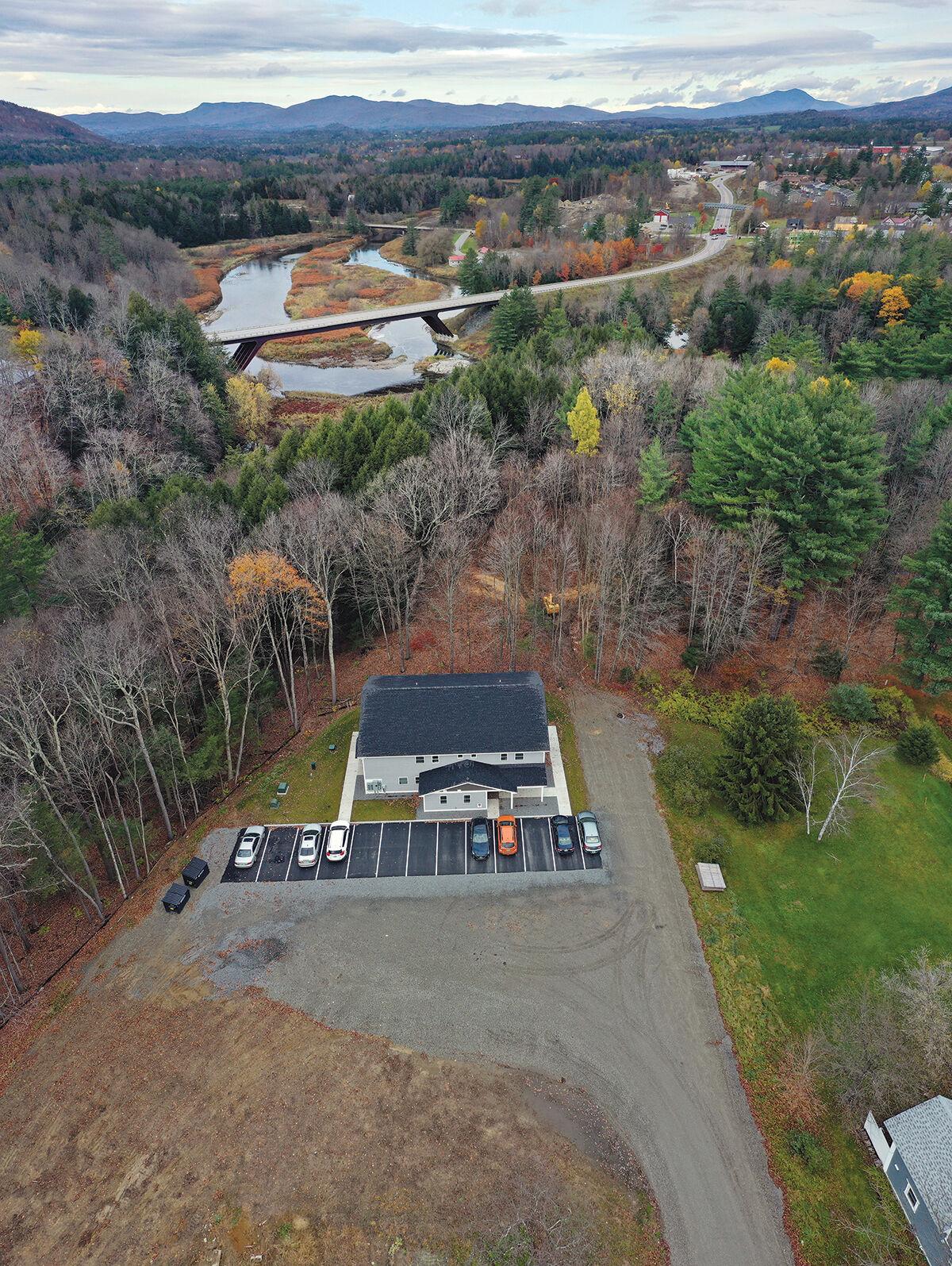 The site is planned for a property between Jersey Heights and the village bypass. 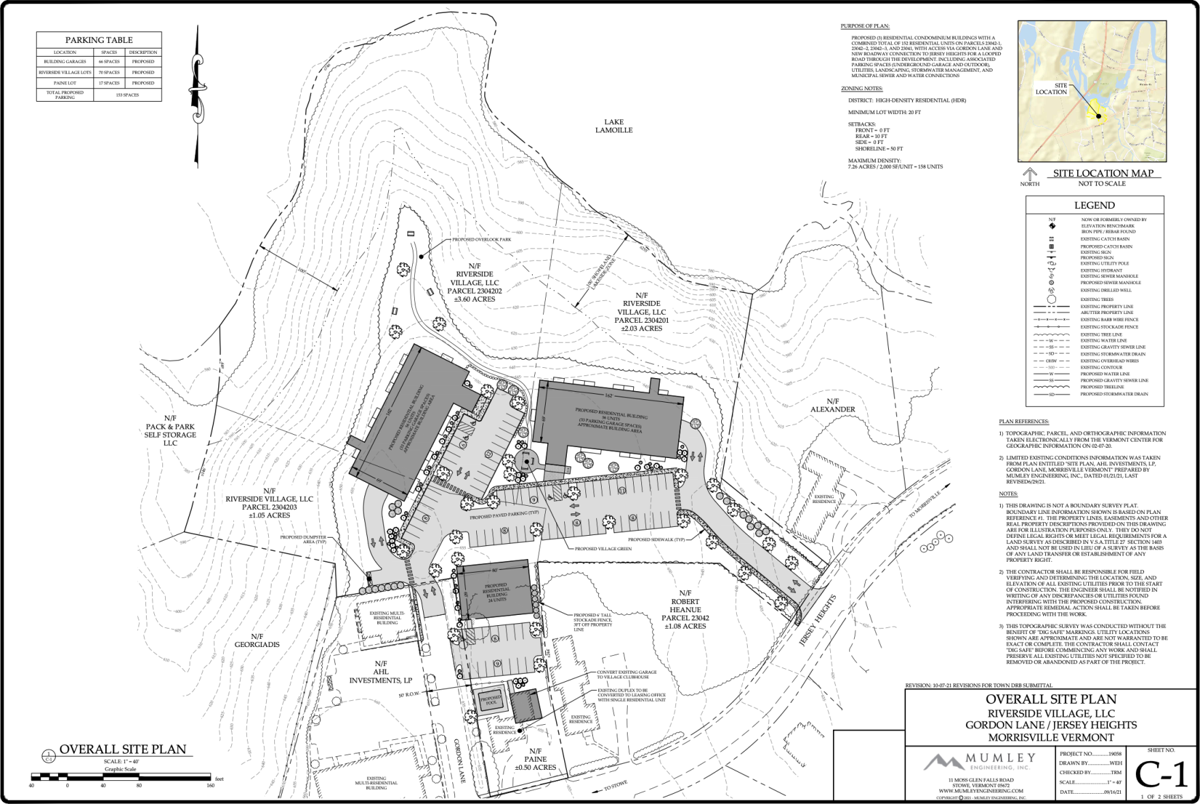 A site plan of the proposed Riverside Village development.

An overhead view of the forested site where developer Graham Mink plans to build perhaps the largest housing complex in Morrisville’s history.

The site is planned for a property between Jersey Heights and the village bypass.

One of Morrisville’s most prolific housing developers of recent years has been given the local go-ahead to build what may be the town’s largest-ever housing complex.

Developer Graham Mink received approval last week from the Morristown Development Review Board for the construction of 136 housing units on the village’s southern outskirts, about halfway between the end of Main Street and the southern end of the town truck route, or village bypass.

The project, located off Jersey Heights (formerly known as Historic Route 100), will consist of a pair of four-story structures, each with 56 residential units and underground parking garages. A third 24-unit structure will be built closer to the main road. It will all be eventually known as Riverside Village.

The larger structures will be set back on a gentle promontory overlooking Lake Lamoille, amid a large thicket of trees that Mink’s design team says will largely hide the development from all sides. The separate 24-unit.will also block much of the view of the other buildings.

The development review board narrowly approved the project on a 4-3 vote when discussion was halted after about two hours and a motion to go into deliberative session failed. Some were concerned about the sheer size of the place and its impact on traffic, town services and the general makeup of the neighborhood.

Mink, who has drawn admirers and detractors for the rapidity of his downtown projects — among others, he has one corner of Bridge Street by the bypass locked up, with a pair of multi-unit apartment buildings built a few years ago about to be dwarfed by the large apartment complex currently being built in front of them.

Mink said he intends to sell the Riverside Village units, rather than rent them.

“We have 50 people on a list looking for housing and there are, like, five to 10 homes for sale in town,” Mink, a former professional hockey player who is also a property manager and real estate agent, said. “I’m trying to address a workforce housing shortage.”

The project still has plenty of regulatory hoops to jump through, including a state Act 250 land use hearing.

“This is step one, and we do have a way to go,” Mink said. “We haven’t done a project like this yet.”

This part of town was recently re-zoned as a high-density residential area, meaning more places can be packed into smaller places — and Riverside Village would pack in a lot.

As designed, the development will feature dual four-story buildings arrayed at the northern edge of a steep slope that goes down to what is technically Lake Lamoille, the body of water visible from the bypass bridge, and Clark Park, a parcel of riverside land. They will be about 50 feet tall, but architect Paul Trudell — a review board member who recused himself from the hearing — said the trees around it, many of which will remain, stand about 80 feet tall.

There will be parking underneath each building with 31 spaces, and another 84 spots above ground. There will be a secondary one-way entrance on the west side of the property, where the road dips down and around the hill. A pool and a “village green” are part of the design, as is an overlook park on a finger of land looking out over Lake Lamoille. Dirt trails might be carved into the hillside to give residents access to the woods and water.

Trudell and project engineer Tyler Mumley said the lines of sight and the tree cover are such that any glimpses of the four-story buildings from people driving along the bypass or Jersey Heights will be fleeting.

“At 25 miles per hour you will have 2.2 seconds to see this,” Trudell said, referring to the speed limit on Jersey Heights.

Christy Snipp, a board alternate who was summoned to replace Trudell for the hearing, was one of the people who voted against the project as presented — she was joined in her no vote by Laura Streets and Mary Ann Wilson. Snipp said people were fretting about how much of the building neighbors and passersby will see, but she worried how much lighting it would take to illuminate the area at night. Mink said there would not be lighting in the parking lots and the structure lighting will be downward facing and occupant controlled.

Some board members, even though those who ultimately approved of the project, remarked at just how large the project would be.

“I have grave concerns about the scale of this in this established area,” Snipp said, while acknowledging more housing is needed in Morristown.

Kristin Fogdall, who lives on Jersey Way, about a thousand feet from the development, submitted a written statement laying out her concerns, some of which had to do with safety. Mink pointed out to the board that Fogdall lives too far from the project to be considered an “interested party” in the permitting process.

Fogdall said the structures would be out of character with the village and town and might someday “become an eyesore” and decrease neighboring property values. She also worried if the current housing boom takes a downturn the buildings would just stand empty.

“This is most likely the largest housing development project ever proposed in Morristown history,” she said. “It may very well be among the largest building projects of any kind in our town.”

Mink countered that putting all those units in four-story buildings is “a lot less impactful” than building that many single-family homes around town. Trudell said this project is about the same sized footprint as five single-family homes.

Traffic remains a major sticking point, particularly with nearby residents. Terry Alexander lives with her husband Mike in a home that abuts the Riverside property right at Jersey Heights’ lowest elevation, hugging the hill on a corner with reduced sight lines. Terry said she has seen mail deliveries have to park on the other side of the road and wait for long periods of time for a gap in the traffic to run across the street.

Board member Susanna Burnham said the speed limit along Jersey Heights is 25 mph, but many people go much faster through there. If people drove the speed limit, she said, it would be safer.

One of the selling points of the project is how convenient a walk it is to downtown Morrisville. But there’s not a whole lot for people to walk on, since the sidewalk along most of Jersey Heights is all but nonexistent — little more than a slightly raised and wider portion of the road shoulder.

Mike Alexander said the town once had grant money to build a sidewalk, but it ran out of funds. Town zoning administrator Todd Thomas confirmed this, saying the town now relies on developers to build the sidewalk as their new places go up. Alexander said he doesn’t think Mink ought to have to spring for a sidewalk the town had on its own to-do list.

Mumley said the Vermont Transportation Agency conducted traffic counts in the area in 2012 and 2015, before and shortly after the bypass was built. The data shows a 29 percent decrease in traffic along Jersey Heights, or nearly 2,200 fewer cars per day. Mumley said his data suggests the project would produce an extra 567 daily trips.

A 2020 estimate showed existing traffic only slightly rose, but board member Streets said 2022 traffic data is suspect since so many people were working from home during the early height of the pandemic.